About the author: Founder of the local food and lifestyle blog She Moves PHX, Mer Norwood loves to showcase all the city has to offer, from local spots to creative business owners, and everything in between. Follow her at @shemovesphx.

May is Asian American and Pacific Islander Heritage Month, and we were here for it. This month (and every month) is a great time to celebrate Asian-owned businesses in DTPHX, learn about each business’s story, why many of them chose to start in Downtown Phoenix, and go taste the flavors of Asia that have come to capture our hearts. Here’s what we discovered during this month-long culinary adventure. 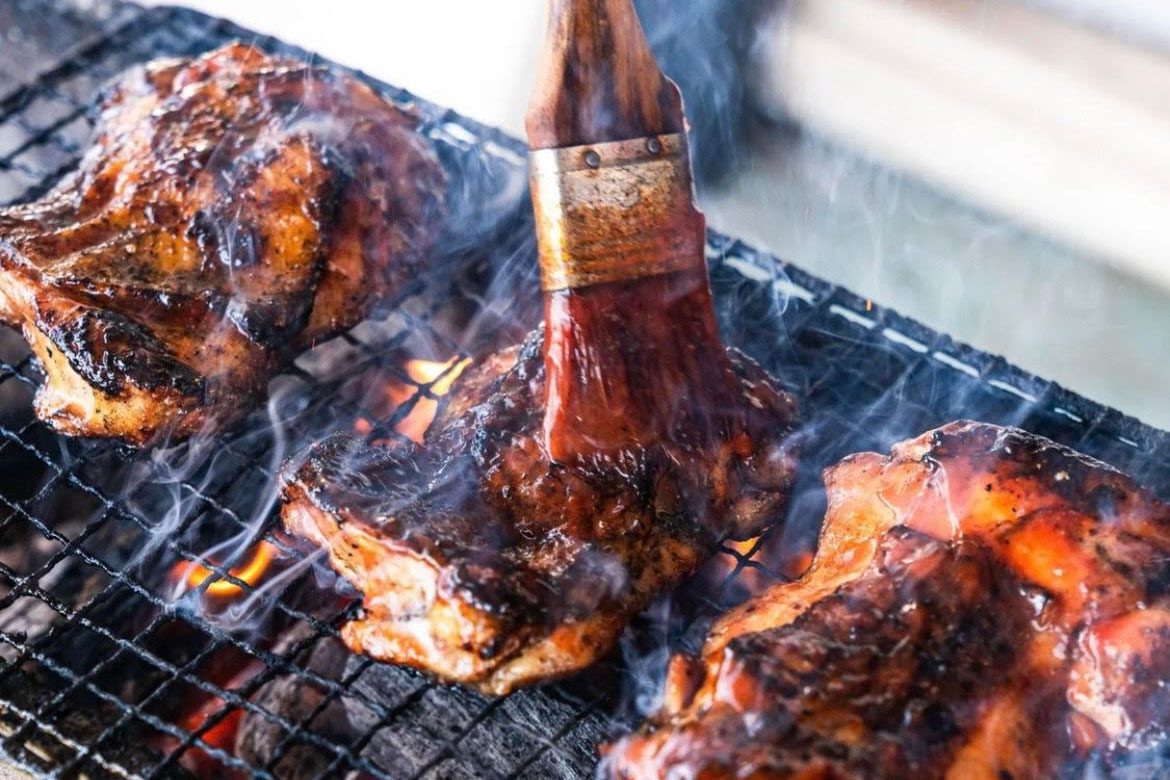 The OG Chicken is a Filipino family recipe by John Cornelio, owner and chef at Toduken, and is flame-grilled over charcoal. (Photo: Franz Lazaro)

Toduken at The Pemberton | John Cornelio

John Cornelio, owner and chef at Toduken, grew up in Alaska, and draws inspiration from its diversity as well as his Dad’s barbecue and Filipino heritage. After three years at the Uptown Phoenix Farmers Market, you can now find him at the Pemberton on Roosevelt Row, creating Filipino-inspired dishes in Downtown Phoenix. He describes his food as, “Filipino soul — but there are other ingredients from everywhere. I’m Filipino, but American too. I’m doing the same thing as Filipino cuisine, I’m just borrowing from other cultures and just making it mine — that’s the spirit of Filipinos.” Try the popular OG Chicken with Pop’s Citrus Teriyaki, and look out for the Pinoy Elote, coming soon. 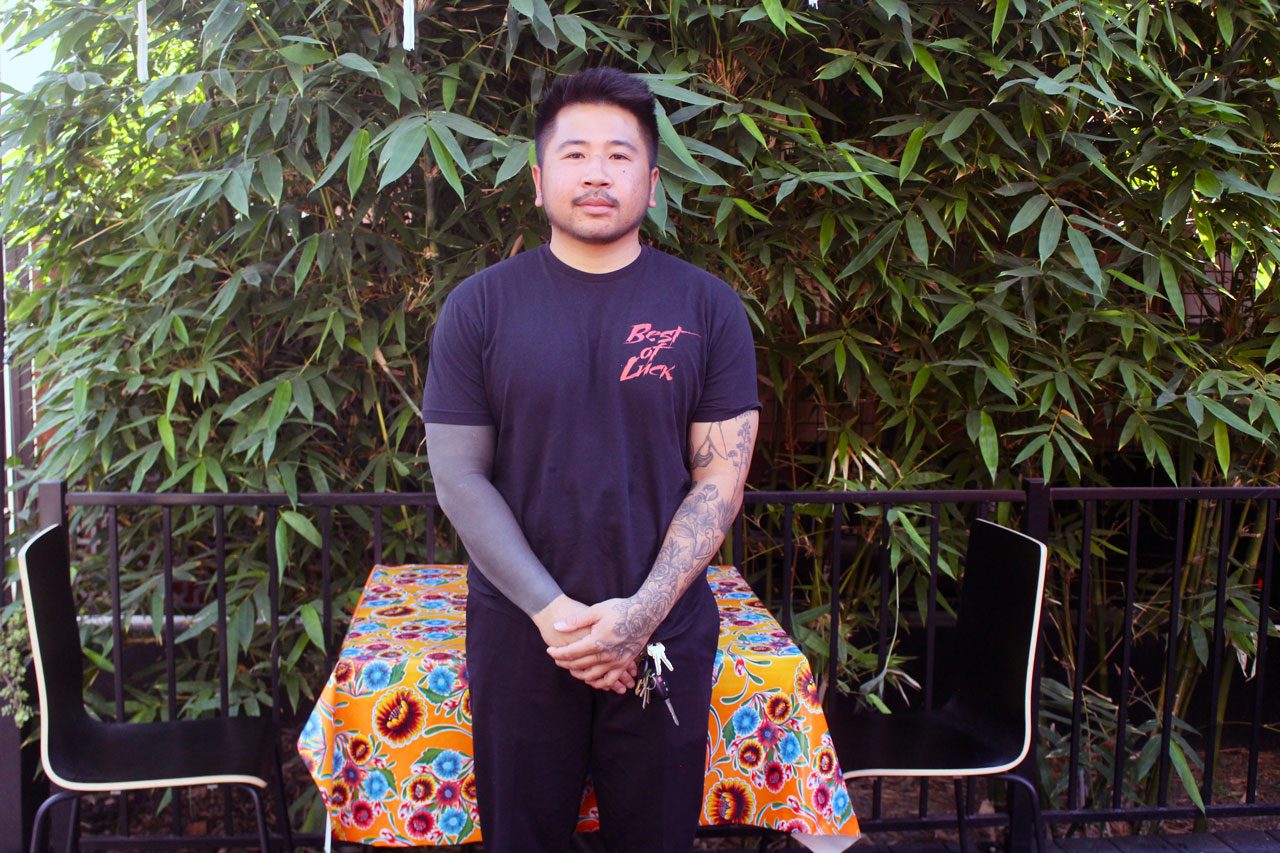 Khla’s drink menu is primarily inspired by Southeast Asia, but the cocktail bar, located behind the newly-opened Lom Wong restaurant, is much more personal for co-owner Tyka Chheng, whose parents are from Cambodia.

Khla, Downtown Phoenix’s newest Asian cocktail bar, is owned and operated by Tyka Chheng, Colton Brock and John Sagasta. Chheng attests that it was always the goal to open up a spot that represented himself and the rest of Asian culture. He grew up in Los Angeles, and wanted to disprove people’s misconceptions about Phoenix’s Asian food and beverage spots. “When you come to Phoenix, it’s just so quiet,” Chheng said. “I felt like a lot of people just assume that Asian places are good, hole-in-the-wall Mom and Pop spots, and we weren’t, for lack of a better way of saying it, a modernized take on food and beverage.” But Chheng and the team are here to change that. Khla’s menu spans the Asian continent, and though the popular Silk Road cocktail is inspired by the White Russian, the artistry it takes to create this drink is a sophisticated two-day process, involving in-house acid to clarify the cocktail and other innovative techniques. The result? A smooth, sweet tasting cocktail that’s almost dangerously too good — a testament to how Khla is shaking things up. “For the first time in my life, I’m putting a foot down in this food and beverage industry,” Chheng said. “We’re definitely here to stay. If you put your mind to anything, you really can do it.” 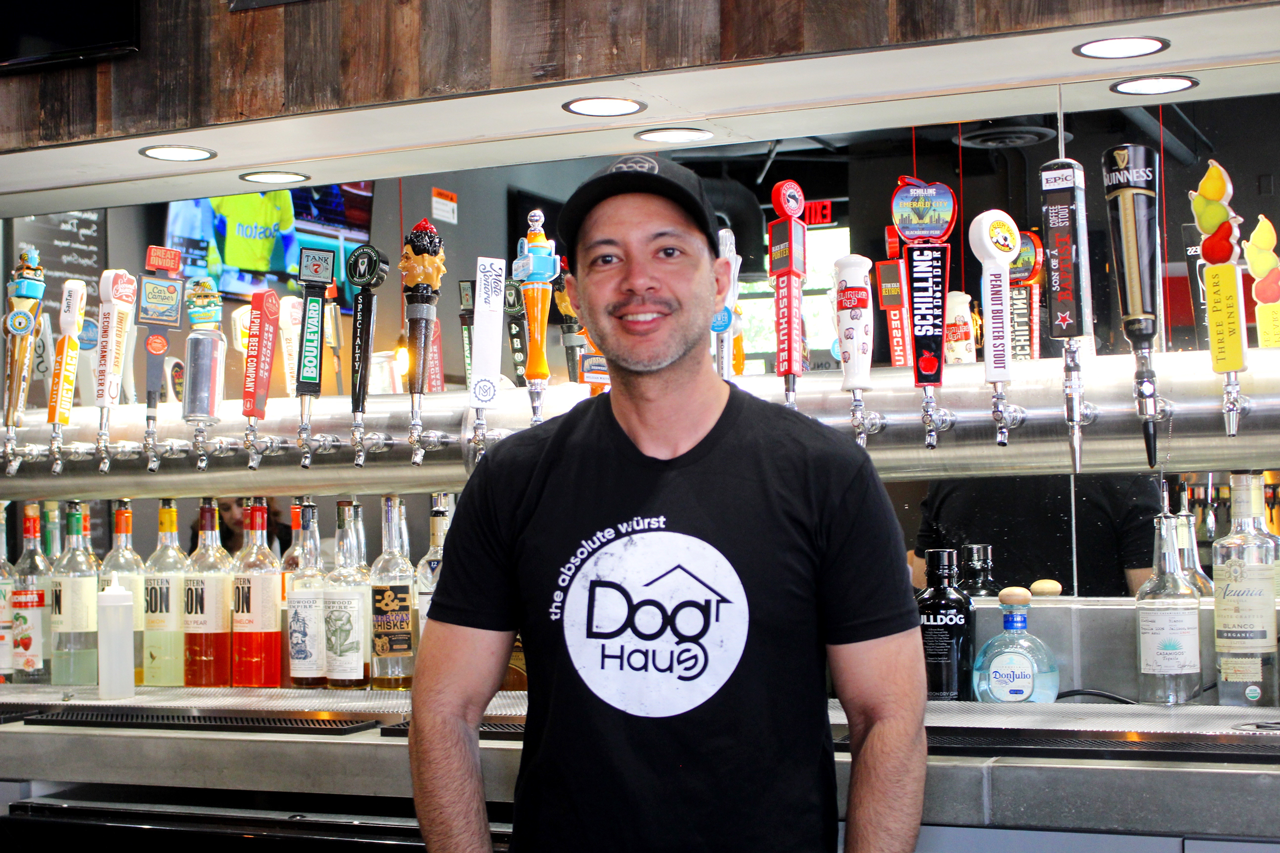 After eating at Dog Haus for three days straight, Mondher Mahmoud aka “Mondo,” was inspired to leave his corporate job and open up his own Dog Haus franchise here in Downtown Phoenix. “I had love for Phoenix, and especially for Downtown Phoenix – going to Suns games, D-backs games, Hanny’s, and I thought to myself, ‘man it’d be so cool to have a spot downtown!” he said. He made that dream a reality. Dog Haus is now locally owned by Mondo and his family. The craft-casual concept serves gourmet hot dogs, sausages and burgers, and the toasted King’s Hawaiian rolls are a nostalgic fan favorite. They even have an “Executive Chef” series with culinary inventions like the Bulgogi Dog (Korean bulgogi-styled hot dog with a fried egg on top) and new dishes with a K-pop flair. The secret to their success? “We’re the absolute würst!” 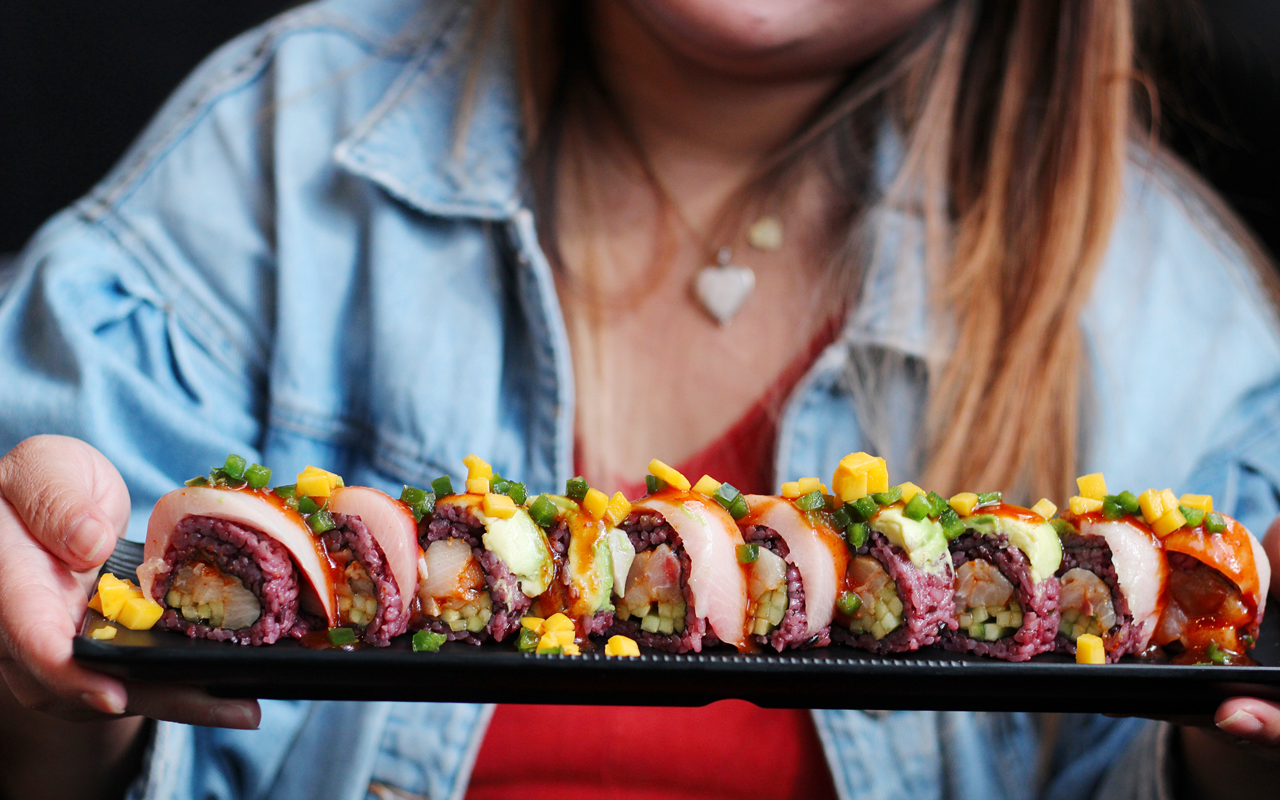 Harumi Sushi is about preserving tradition, mixed with a modern flair. Founded by Young Choi, a “culinary vagabond and super-free spirit,” who thirty-five years ago, had a passion to bring Japanese cuisine to America, according to Jessica Kim, Harumi’s owner. Choi saw that sushi was either incredibly expensive, or the quality was sacrificed in many sushi restaurants, and so he sought to bring accessibility and authenticity to Downtown Phoenix. “There’s a lot of culture here. We wanted our flagship restaurant to be a statement piece. Here, there are the arts, the culture, the basketball. We wanted to be in a sphere where we were surrounded by different cultures,” said Kim. You can stop by Harumi for their special sushi, which includes signature purple rice, and fresh fish flown in from Tahiti, Nova Scotia and Scotland daily. Harumi Sushi just opened a second location in Peoria. 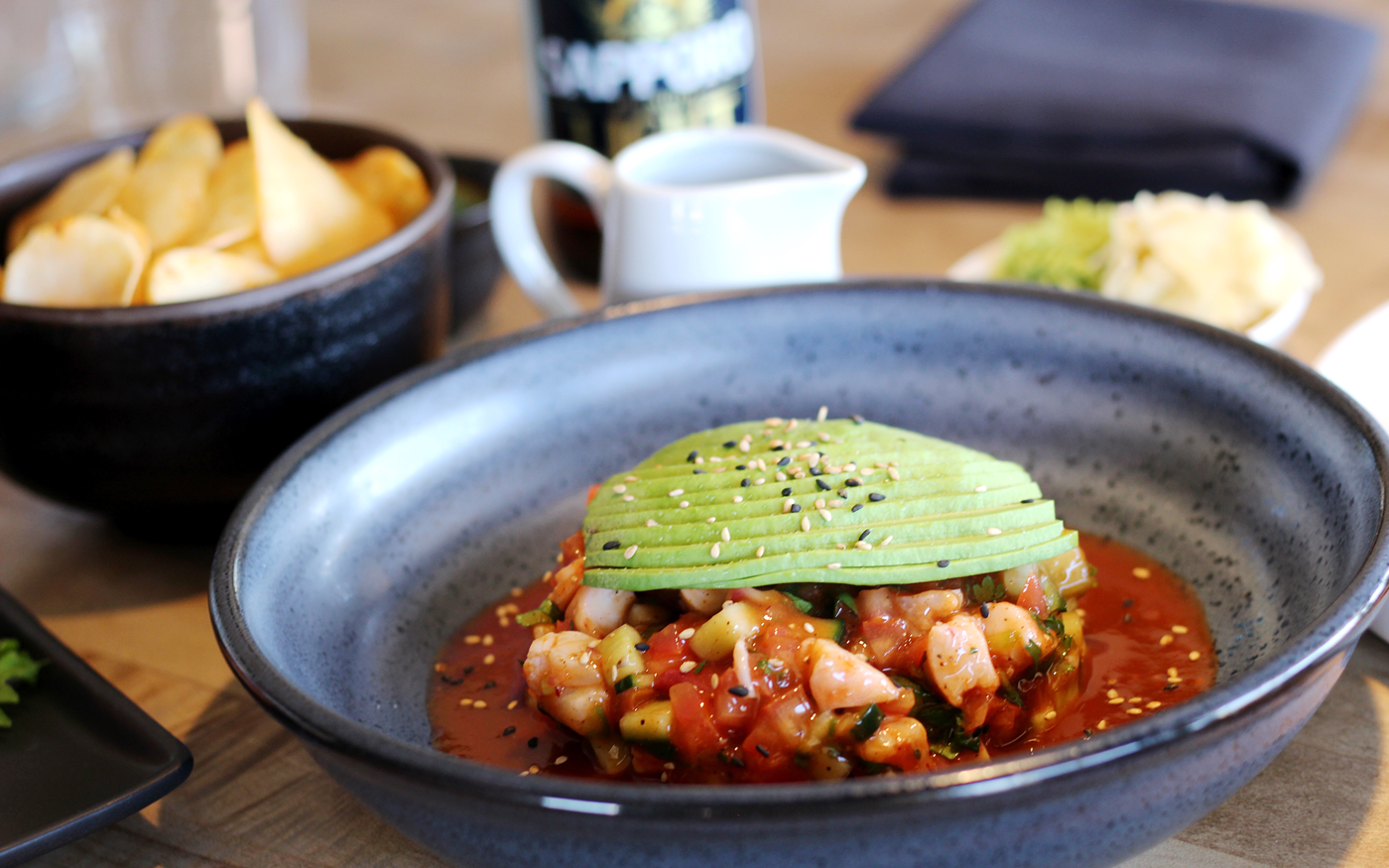 “Kaizen” is the Japanese concept of continuous change and improvement, and Kaizen’s story is indeed an evolution. It began with the founders, Kyu Utsunomiya and Troy Watkins, meeting as 18-year-old pool attendants at The Phoenician resort in the 1990s. The duo have come a long way since then — undertaking amazing culinary projects such as BE Coffee, The Dressing Room and The Larry. When developing the new concept of Kaizen, Utsunomiya’s half-Japanese heritage played a major role in developing Kaizen’s cuisine. “I’m half Japanese, and my father was issei, first generation. Needless to say, I learned to cook through my dad. I was never a chef, however with Troy and I, we’re smart enough to hire talented culinary people,” he said. That culinary talent is now put in the hands of Executive Chef Gustavo Muñoz, and his innovative flavors do not disappoint. The Alaskan King Roll combines lump king crab, king salmon sashimi, tempura-fried asparagus and butter — with each bite simply melting in your mouth. 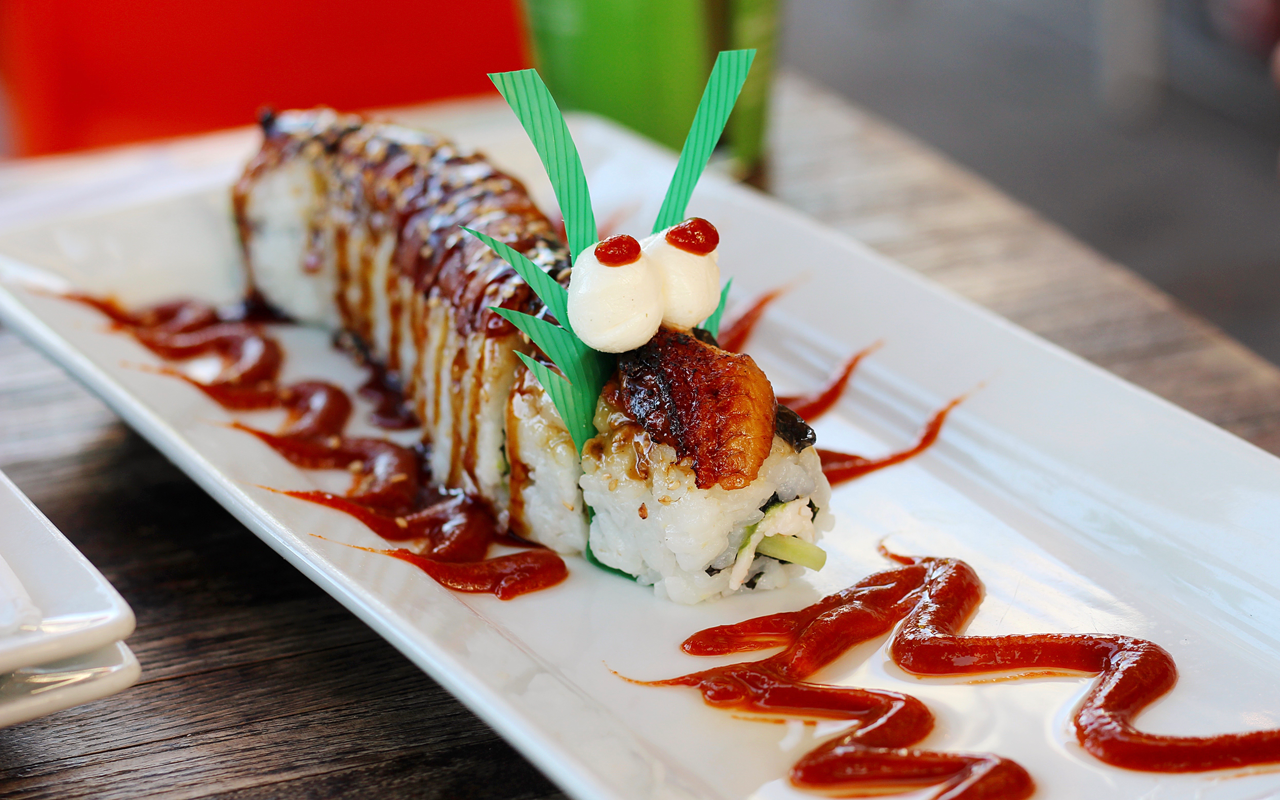 Moira Sushi is tucked away in an unassuming street in Downtown Phoenix, but has been thriving under the leadership of Linda Nguyen for the past 12 years. Bringing over 20 years of experience in the industry to this quaint sushi spot, Moira was one of the first sushi restaurants to open in Downtown Phoenix, all those years ago. Moira’s mission is simple and sincere, “We just want to be ‘that restaurant downstairs’ where our neighbors can stop in for a drink or bite after a long day of work, and somewhere with consistent good food that our customers can trust to help with stress. I know I would like to go out for a nice solid meal after a very long day,” Nguyen said. And what better stress reliever than a dish set on fire? Order their Hama Kama, a deep-fried yellowtail shoulder lit on fire, and enjoy the flames. 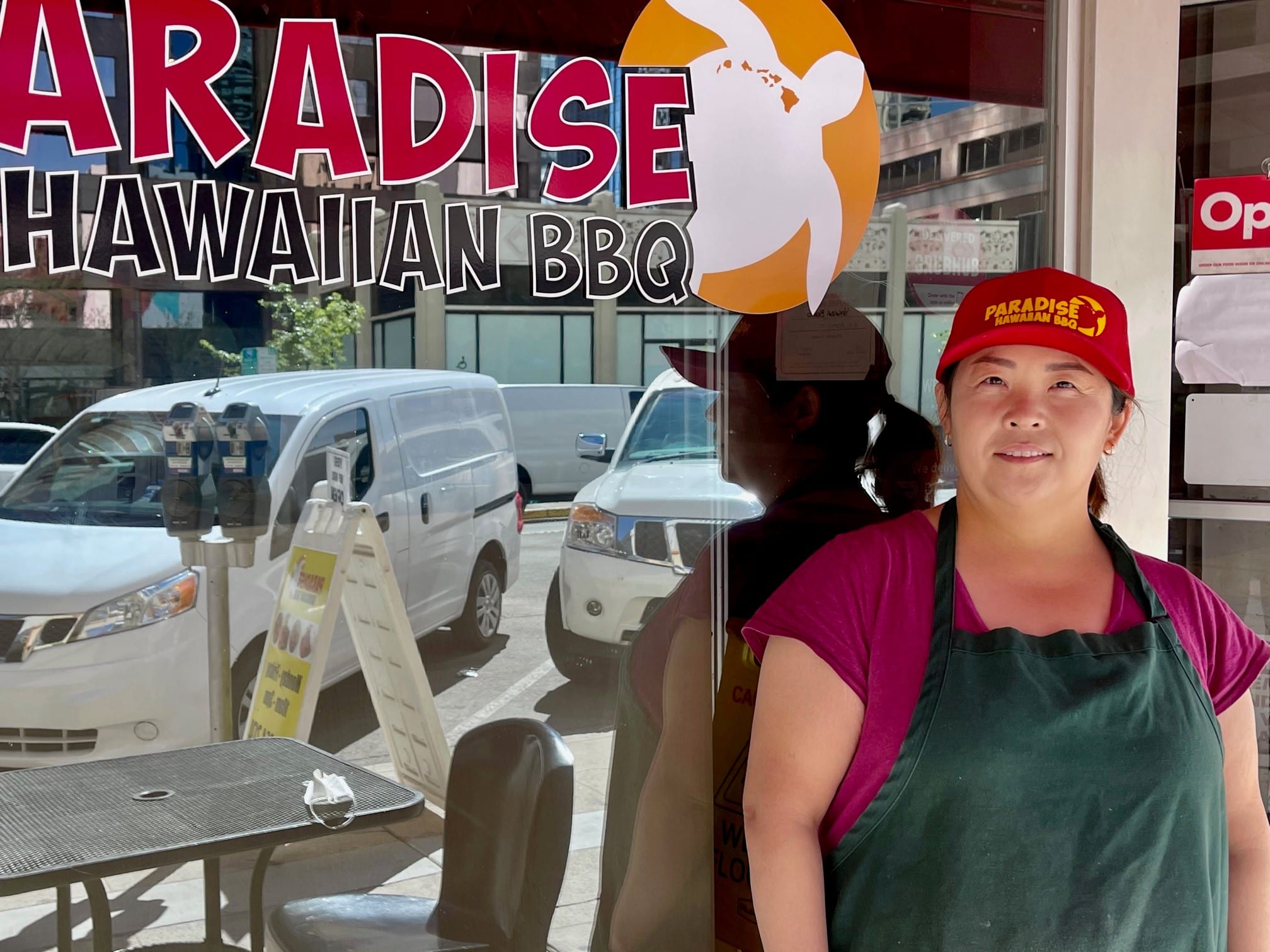 Since 2008, two sisters, Diana and Rena Kang, have been bringing the “Aloha Spirit” to Downtown Phoenix with their Hawaiian cuisine at Paradise Hawaiian BBQ. Hawaiian cuisine draws from many Asian influences including Japanese, Korean and Filipino, and nothing tastes better than their mom’s home cooking (she stops by occasionally). Try the Chicken Katsu Burrito which includes Hawaiian favorites like chicken katsu, macaroni salad and rice. 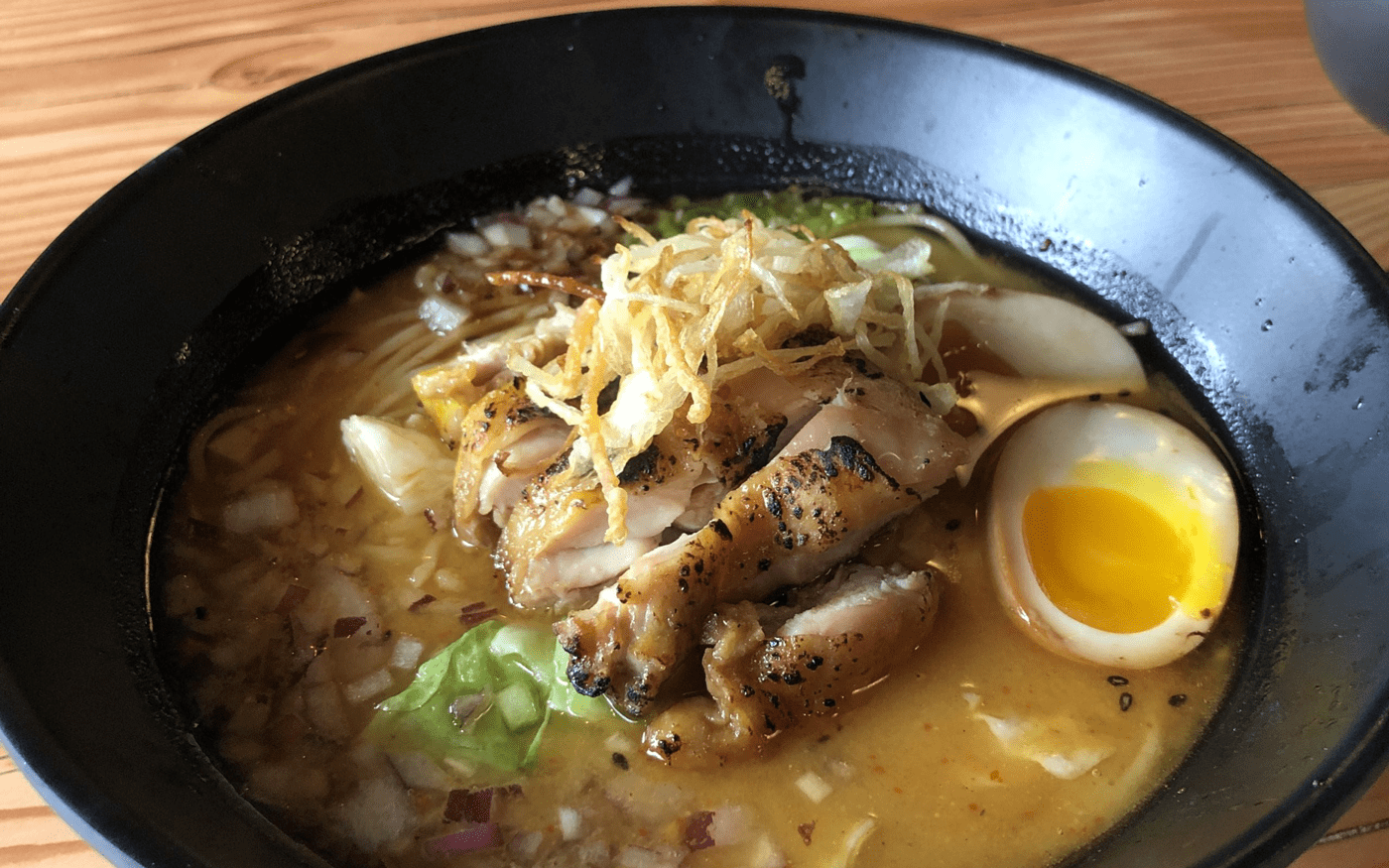 “You could say ramen is almost like soul food in Japanese culture,” said Shunji Tohoda, owner of Ramen Kagawa. Ramen Kagawa is one of the newest restaurants in Downtown Phoenix and definitely experienced some challenges opening just prior to the pandemic in 2020. But Tohoda said they’re happy to make an impact in Downtown Phoenix. “There’s so many ramen restaurants to choose from in literally every city. California has a bigger Asian population, so there are more ramen and Japanese restaurants there, but Phoenix could definitely expand more on Asian restaurants. We’re very hopeful things will get better and better for the future,” he said. And the ramen is definitely delicious, offering multiple pork tonkatsu and vegetarian options, as well as offering the finest noodles Downtown Phoenix has to offer. 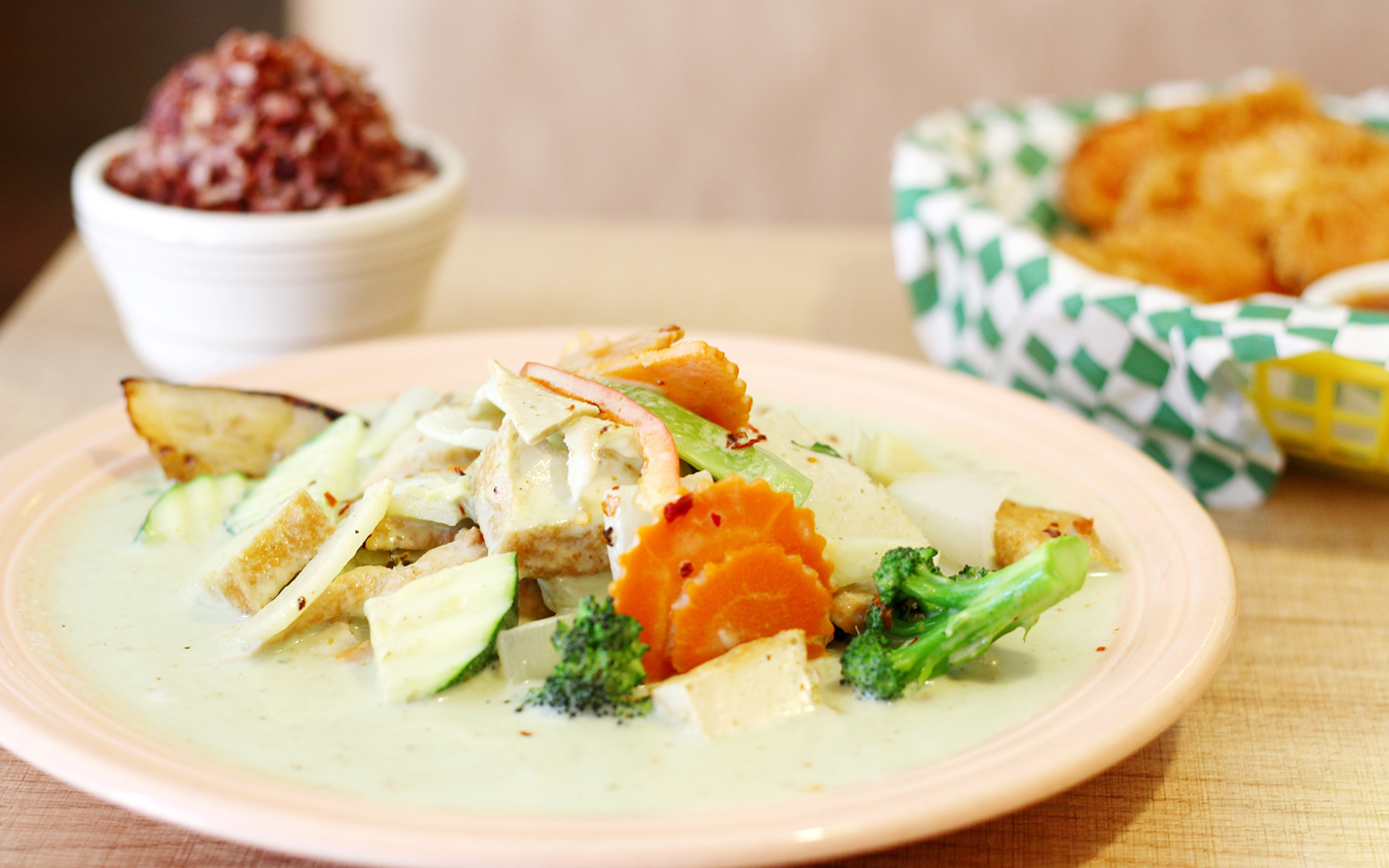 Founded in 2016, Vegan House is popular among vegans and non-vegans alike. Sorada VanBlargan assumed ownership in 2017, going from Vegan House’s restaurant manager to business owner. She excitedly brings her Thai heritage to much of the menu “adding the spices of Thailand” to many of the dishes. For instance, Green Curry is a wonderful mixture of coconut milk, onion, bamboo, bell pepper, eggplant and basil. Vegan House’s mission is to not only provide healthier options to Downtown Phoenix, but to “incorporate the taste of Thai food into the vegan dishes.” 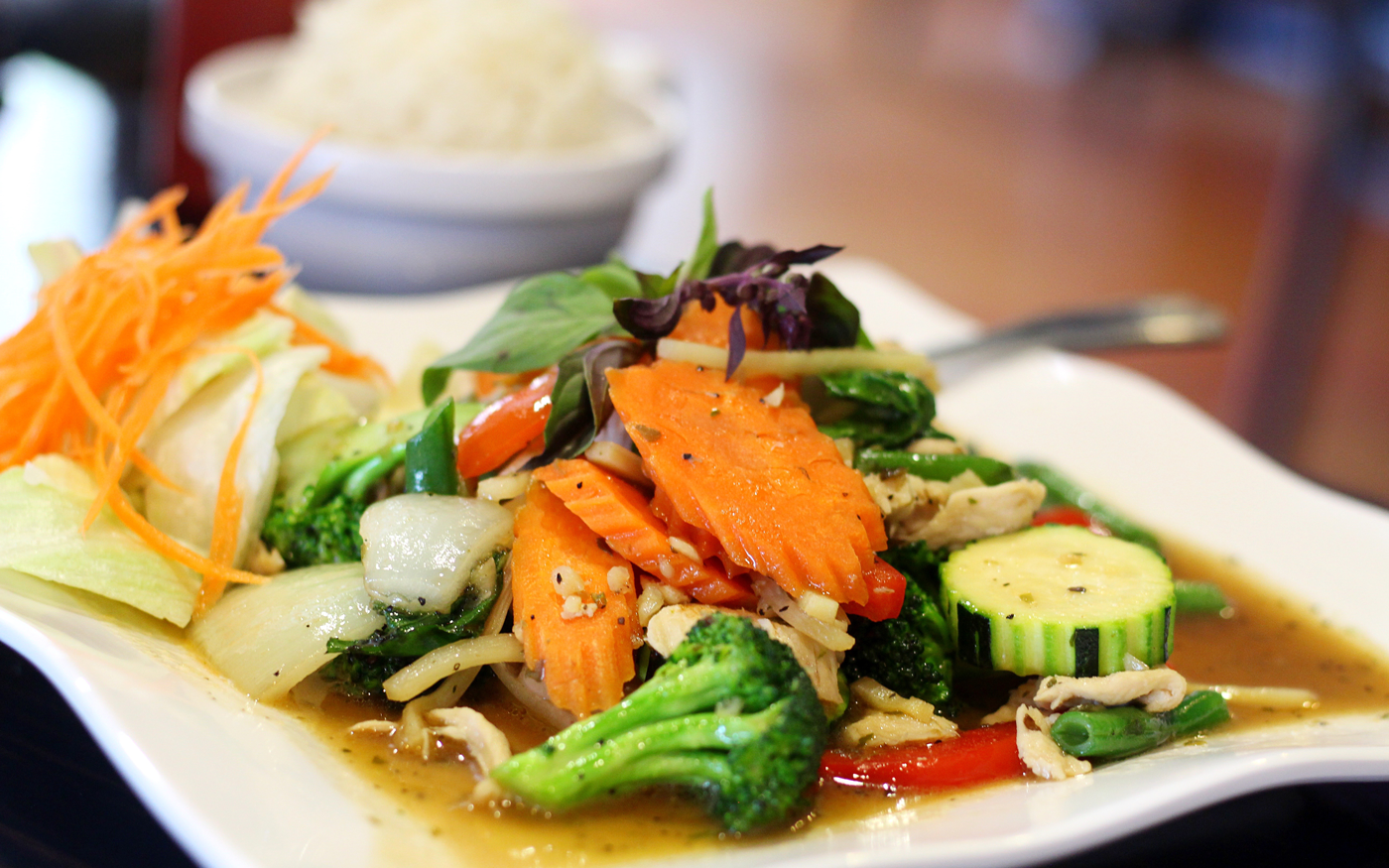 Thai Basil Signature has two locations, one in Downtown Phoenix and one in Scottsdale. Thai Basil has been family-owned and operated since 2008, with owner Patrida Fite at the helm. There’s a reason this corner restaurant has staying power on the block for over a decade. From tasty house-specialty dishes to happy hour and lunch specials, there’s lots of variety. Try the Thai Basil Signature Dish — the dish they named their restaurant after, for its fresh vegetables, spicy flavors, and the key ingredient, Thai basil. 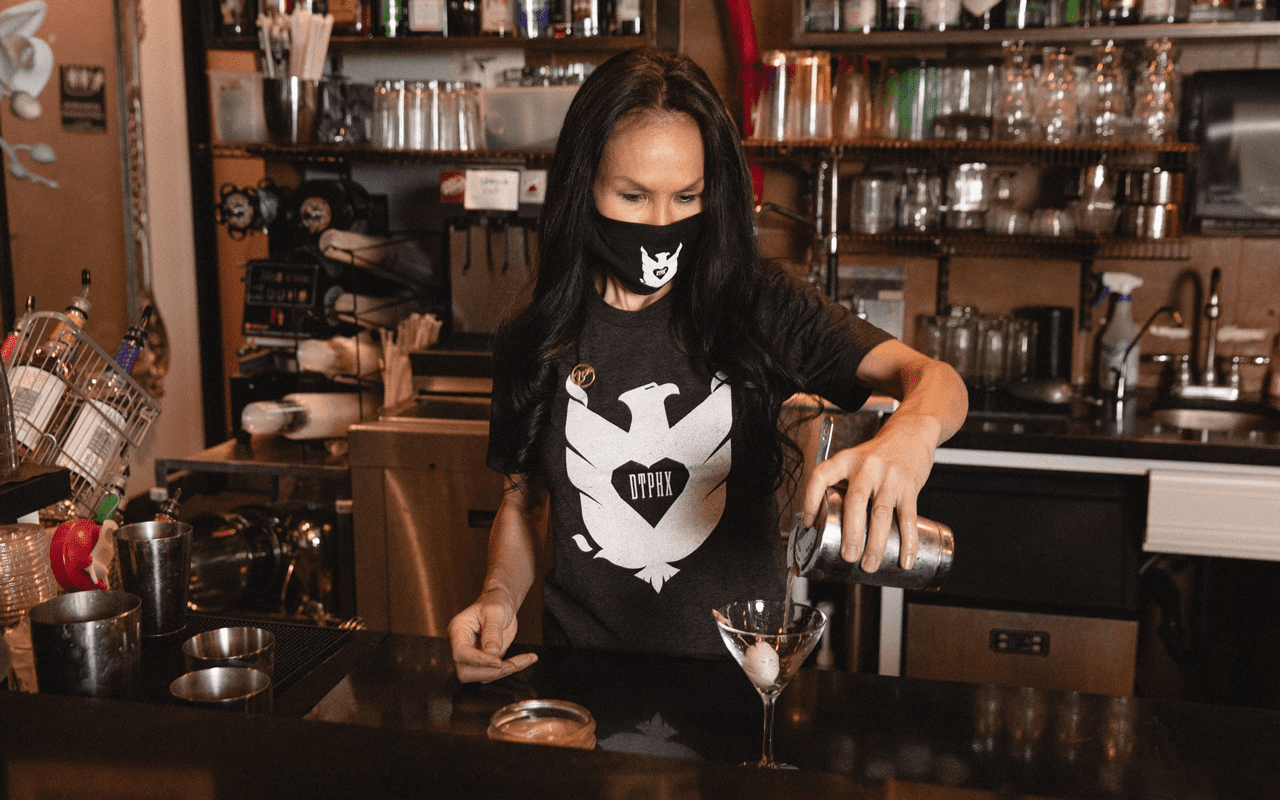 Rachel McAuley works tirelessly to provide happiness to each and every one of her customers. “We’re very fortunate to have customers who are like family,” said McAuley, owner of Zen Thai Cafe. More than a Thai restaurant, it’s also a cozy café, because after all, “Downtown Phoenix needs caffeinated drinks! We do it the Asian way,” according to McAuley. In addition to the delicious Thai dishes she concocts and creates, Zen Thai Cafe provides many of the ASU population with everything from Vietnamese coffee to Thai and boba teas, as well as providing a local hangout spot. McAuley is wholeheartedly grateful for the supportive community of Downtown Phoenix. “There’s so many heroes! When you have people on your side, helping you with your business, it’s so touching,” she said.