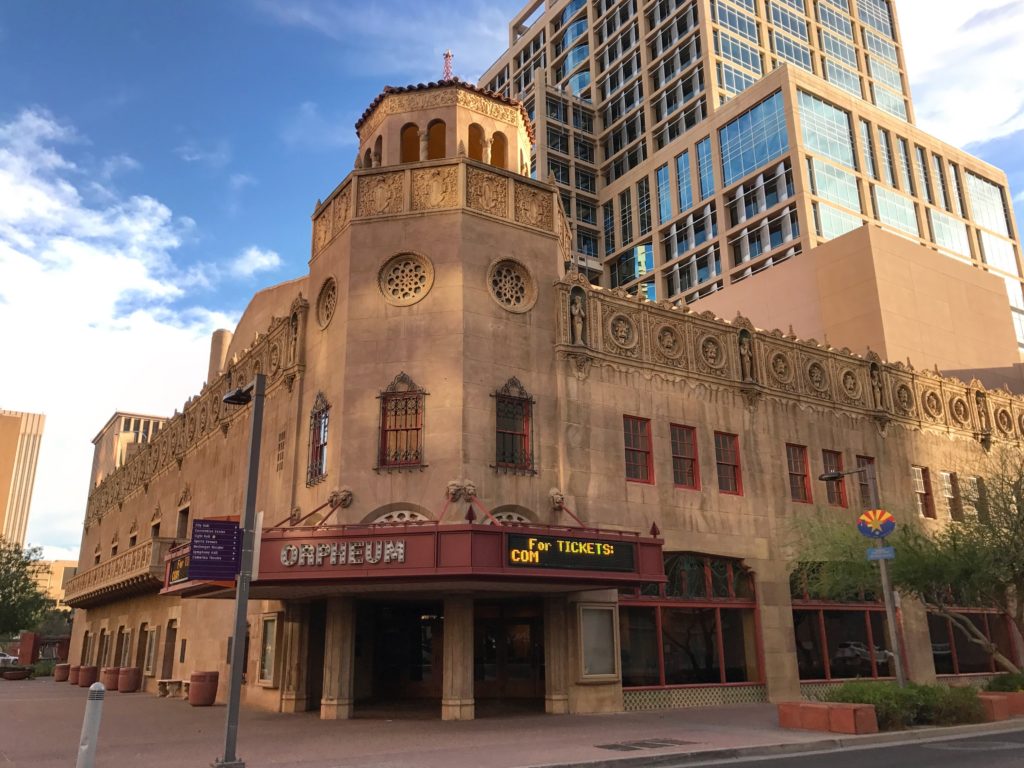 Built in 1929, Orpheum Theatre is Phoenix’s most architecturally intact and largest remaining theatre. At the time it was built, it was the largest and best theatre of its time. It hosted theatre, plays, movies and vaudeville and was the cultural center of Phoenix at the time. The theatre is the best example of Spanish Baroque architecture in Phoenix. In 1984, the City of Phoenix purchased this historic theater after it fell into disrepair, beginning a 12-year restoration project. Today, the theatre is still used for many cultural events throughout the year, and free tours take place on alternating Tuesdays.
Source: National Register of Historic Places 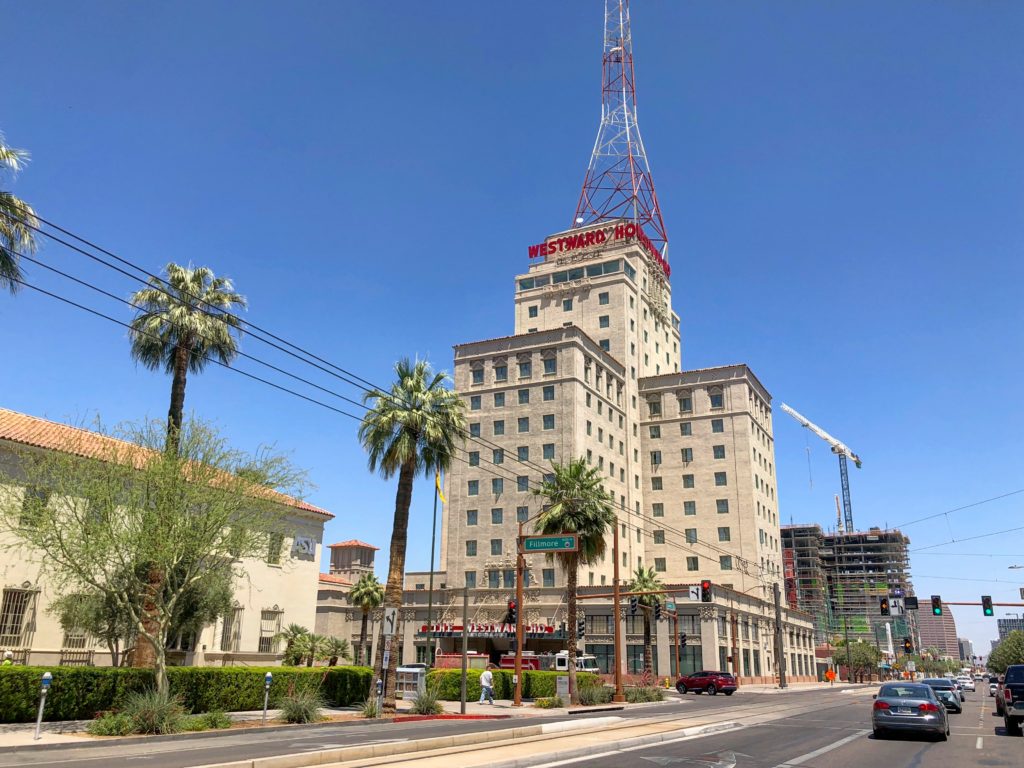 This iconic building was originally constructed in 1928 as a hotel with Spanish Colonial Revival detailing. It is now subsidized housing for the elderly and mobility impaired. Before its closure in 1980, several famous movies stars and politicians visited the Hotel Westward Ho, including Clark Gable, Elizabeth Taylor and John F. Kennedy. The ground floor is now home to Arizona State University’s Community Collaborative program which provides free psychosocial and preventative health services and activities for Westward Ho residents. 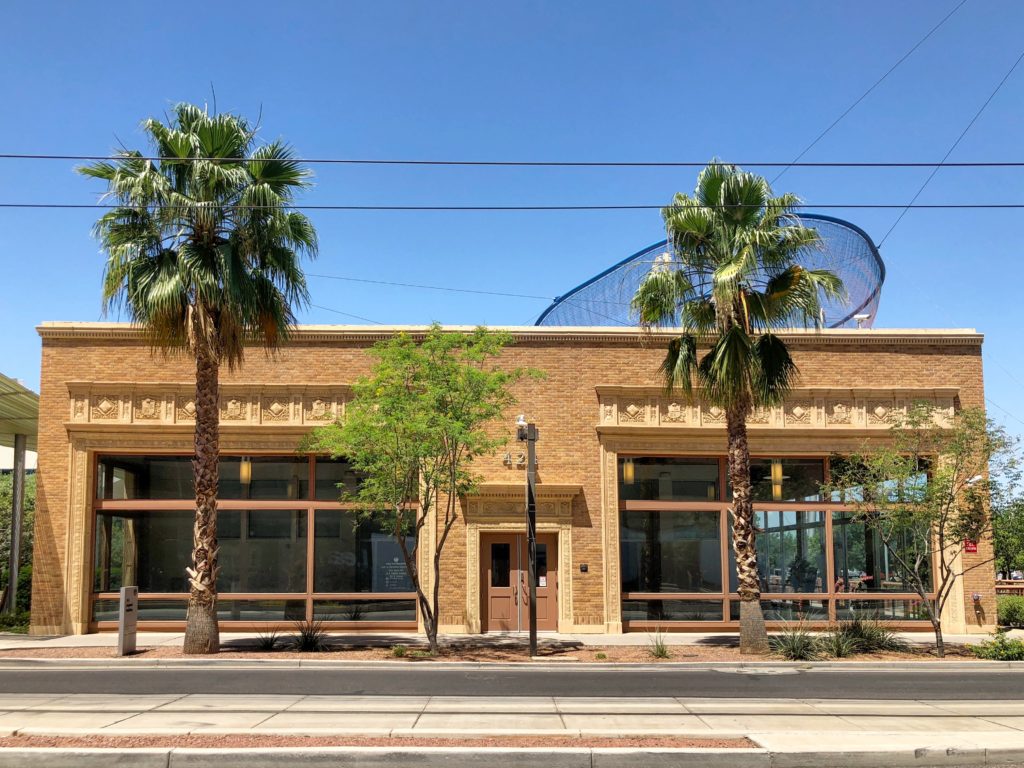 Part of Phoenix’s original “auto row” — this Spanish Revival building was constructed by prominent local builder Clinton Campbell as the A.E. England Motors, Inc. building in 1926. Three large storefront windows are surrounded by ornate caste concrete and decorative molding along the roof. The large windows  were designed to showcase automobiles from Hudson Motor Car Co. (1909-1954) when the building operated as an auto dealer. Over the years, the building housed various businesses like Electrical Equipment Co., a stationery store and an art gallery. The building was listed on the Phoenix Historic Property Register in 2006 and rehabilitated by the City of Phoenix in 2008-2009 as part of the downtown Phoenix Civic Space.
Source: Downtown Voices Coalition 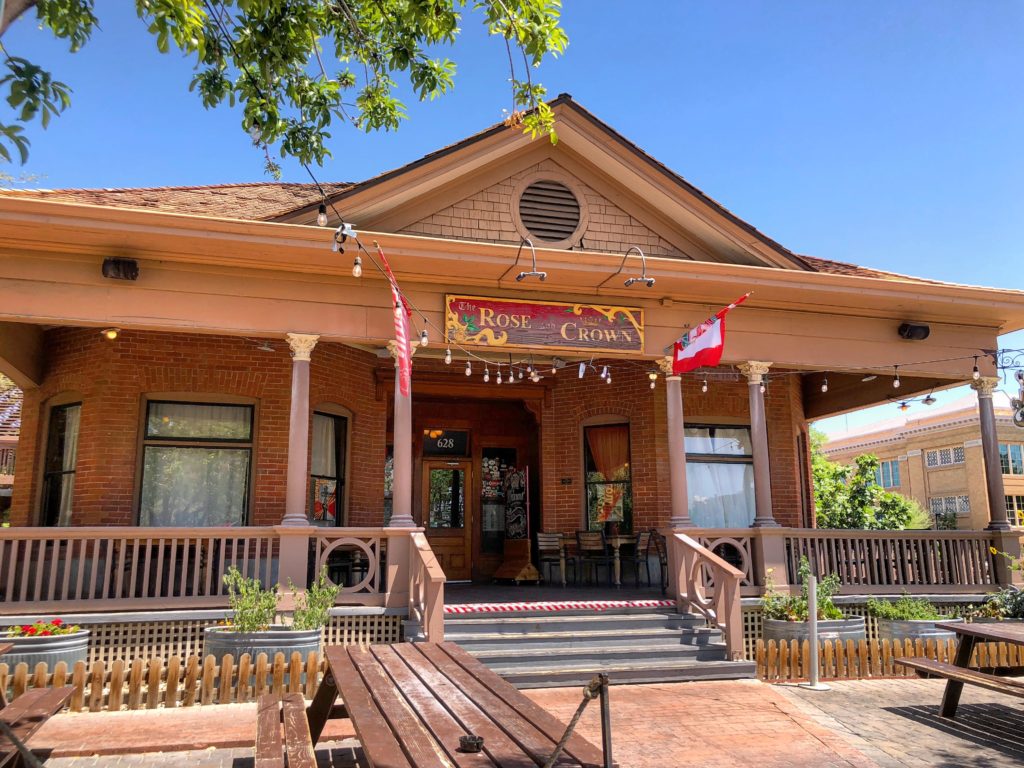 This 1900 bungalow is one of the few remaining properties from Block 15 of Phoenix’s original townsite. A Phoenix liquor dealer, A.K.C. Kirchoff, originally built the house on land he purchased from Flora Rosson. It features turn-of-the-century architecture, with neoclassical revival references. In 1906, Kirchoff sold it to Alejandro Silva, a Glendale rancher and warehouse owner. The building, and other parts of the remaining town site, was added to the National Register of Historic Places in 1978. The home is now occupied by The Rose and Crown English pub.
Source: Heritage Square 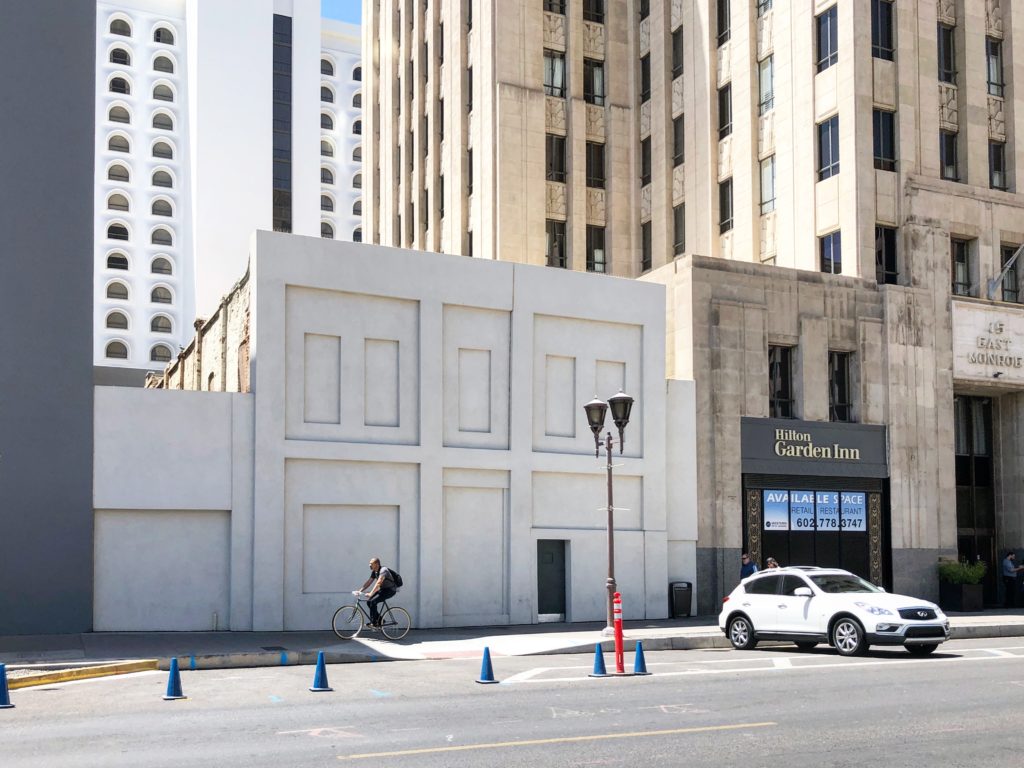 Built in 1889, this two-story former hotel has gone by many names including Alamo Hotel, St. Francis Hotel and Golden West Hotel. Though the brick building may not look like much today, it originally possessed a Victorian-style façade, but the front was modified in 1935. It’s owned by CSM, the same real estate developer that renovated the historic Professional Building adjacent to it (now the Hilton Garden Inn Phoenix Downtown). They haven’t made any official announcements as to what they’ll do with the building. The property is listed in the Phoenix Historic Register and the National Register of Historic Places.
Source: National Register of Historic Places 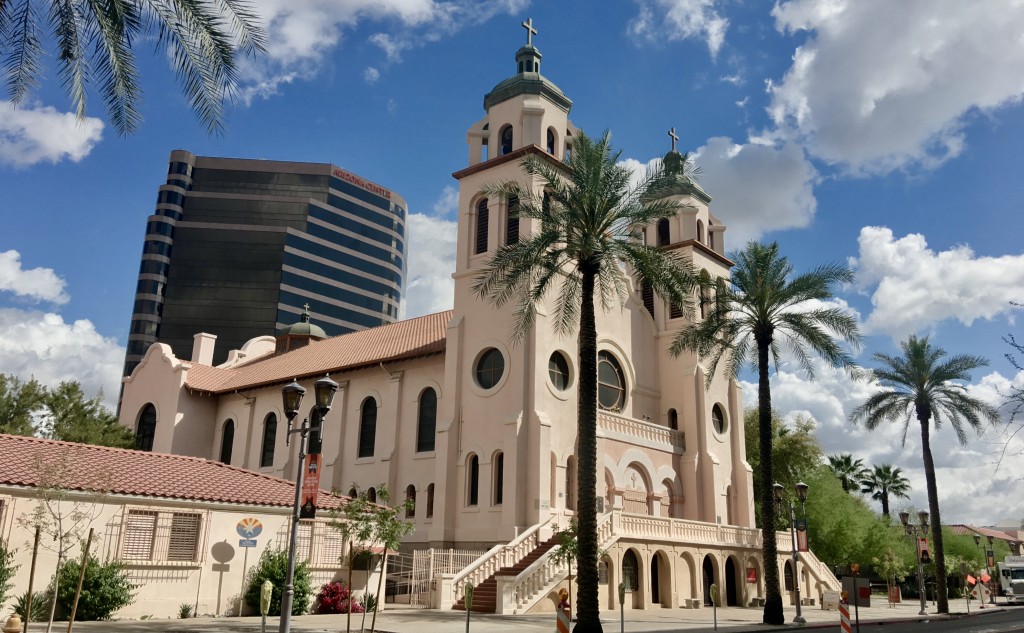 The oldest Catholic Parish in Phoenix was built here in 1881. The Spanish Colonial-style church you see today was built in 1914, complete with golden altars, Roman columns and the largest collection of stained glass windows in the state. It was placed on the National Register of Historic Places in 1978.
Source: St. Mary’s Basilica 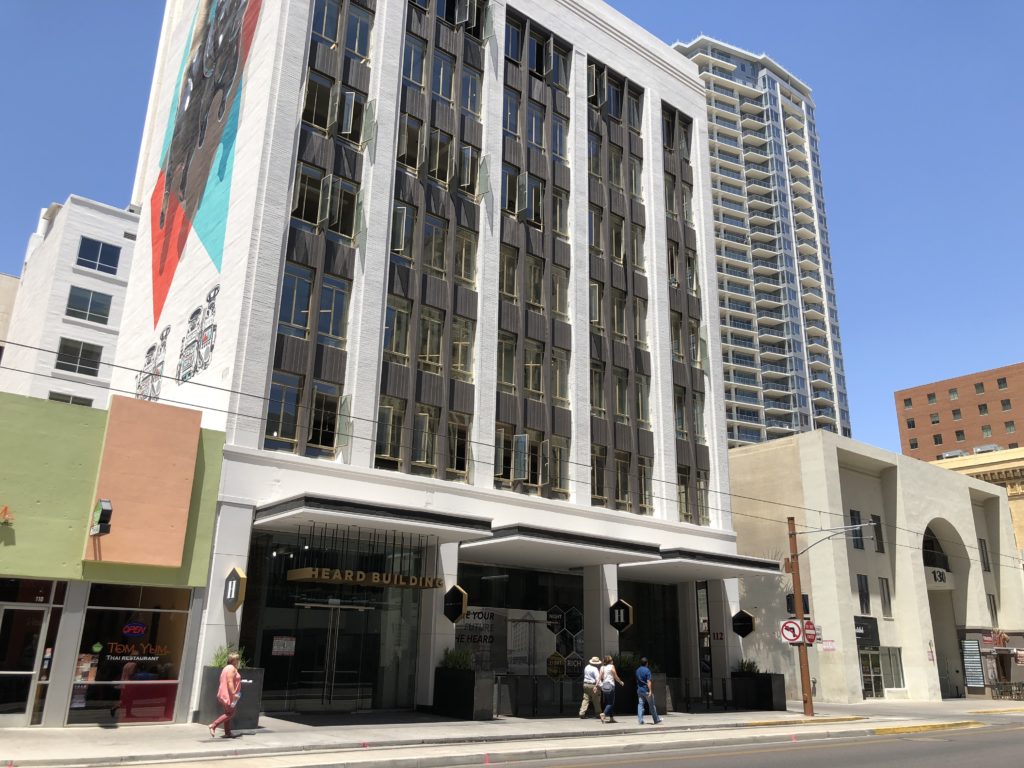 Located on Central Avenue near Adams Street, the Heard Building was constructed in 1919 and is considered the first “skyscraper” in Arizona. It was owned by Dwight Heard, who also owned the Arizona Republic and Phoenix Gazette. Both papers operated in the building, which was also the broadcasting center for KTAR radio. The building’s original Chicago-style façade was remodeled in 1937 and was added to the National Register of Historic Places in 1985. The interior and exterior of the building are currently undergoing renovations to remove the 1937 additions and give it some much-deserved street presence.
Source: National Register of Historic Places
Want to learn more? Visit Arizona Preservation Foundation, Preserve Phoenix, or Phoenix Historic Neighborhoods Coalition online. See some of the city’s historic gems this Sunday, May 20 at our Downtown Pedal Around social bike ride.
We know you have Instagram
#DTPHX