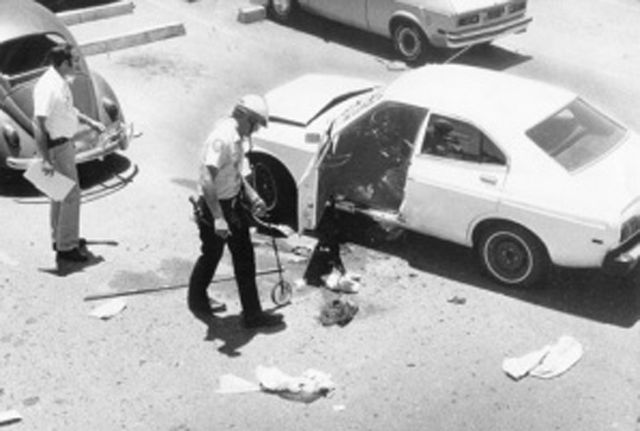 Before eating, I excuse myself to go wash my hands in the restroom. I hate this restroom for the daytime–it is way too dark for lunch during the day, but I guess it might be great for the later bar crowd. What I do notice coming out of the restroom is the hallway of oversized photos documenting the murder of Bolles. It is harrowing.
I mention this to the Crazies. They remember the Bolles murder very well. Crazy Ann excuses herself to view the photos of Bolles in the adjacent hallway. On her return, the Crazies have quite the discussion on their memory of the Bolles murder.
“You have to understand that Phoenix was still a small enough town in those days that just about everyone knew someone connected to the Bolles case,” Helen offers. “But all these years later, I still feel sensitive talking about it.”
While they share plenty of stories of who they knew and side stories about the case, they are adamant their conversations remain private. Darn–it is really juicy stuff. Oh well, on to lunch.
Wow, wow and wow!
First, there is nothing pretentious about Gallo Blanco. Second, it is truly comfortable. How nice it is to be able to walk into a really great restaurant in town without a reservation and not have to wait for a table.
The restaurant has a relaxing vibe, and the menu offers great food and flavors of Central Mexico. It is uncomplicated, supports local agriculture and is truly affordable. Trifecta!
Our waitress is well-informed about the menu and answers our myriad of questions with ease.
We start with Ensalada Cortada ($7)–a mix of kale, red and white cabbage, corn nuts, egg, avocado, Manchego cheese and a house ranch dressing.
It should be noted that dining with the Crazies means sharing every plate of food–not a tradition I warmed up to in my early days of dining with them. But these days, trying to watch the waistline, it seems like a great way to taste lots of food without feeling all the guilt. I’m in!
Everyone at the table tastes this salad and the decision is unanimous: perfect. It is satisfying and the corn nuts add a texture that is at first peculiar but soon addictive. The salad could be a meal by itself for someone looking for a lighter meal.
We also order the house French fries ($2), served with an Aji Aoili dipping sauce. Made fresh, they are irresistible!
Between our starter and main courses, Ann and Helen recount how their parents used to dine at the Clarendon’s signature restaurant during the 60’s, which was then the El Jardin and occupied the same space of Gallo Blanco, with a big picture window in the front of the restaurant.
“It was real fancy and upscale in those days,” says Helen. “It was a special occasion place and Mother and Daddy would get real dressed up to go to El Jardin.”
Neither Ann or Helen remember dining there. “I really wanted to go because it was so glamorous,” Ann says. “I really wanted to go too, but I was married with little kids and it wasn’t in the budget.”
Our entrees arrive.
Between us we share a cheeseburger ($8) and a platter of tacos (appx. $2 each)–the Cochinita (locally procured pork with Achiote, garlic, orange and Guajillo), and the Carne Asada Beef (grilled rib-eye with charred tomato salsa). I am in love with the Carne Asada tacos. They have a spicy and smokey flavor that I crave. I want to have a great dinner party at my house with this smell in the background–everyone would think I was the best cook in town!
The Crazies, however, are hanging their hats on the Cochinita’s, which have a citrus spell that is magical and offers a little bit of sweetness to the savory flavor.
Meanwhile, the conversation meanders to other great hotel destinations in the “Crazies’” day and talk turns to the Westward Ho. 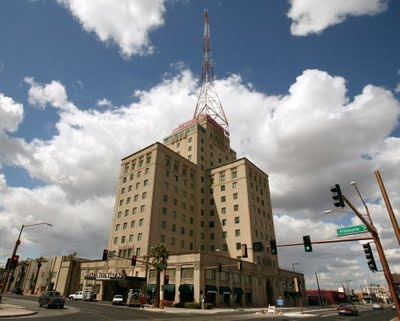 A legendary Valley landmark, the Westward Ho has hosted Hollywood royalty, presidential icons and was made even more famous as the exterior shot for the 1960 Alfred Hitchcock thriller, “Psycho.” These days, it is home for low-income elderly.
“Mother and Daddy would often visit with a reporter friend of theirs–I think Sally was her name, a national correspondent of some sort,” recalled Helen.
“She was so right-wing,” offers Ann, with a nod that is hard to interpret–does she approve or not?
With a return nod of affirmation, Helen continues, “Sally always stayed at the Westward Ho when she was in town, and once mentioned to Mother that the elevator boy thought I was cute, so she set us up for a date.”
I asked her where they went on dates. “To church, mostly,” Helen said, “but then we made out a lot in Encanto Park!!” Scandalous!
Elevator boy’s name was Bob. When I asked Helen what became of Bob, just before our dessert arrived, she shared this. “He was leaving for college in Georgia,” she said. “Mother and Daddy had rented a house in Coronado (CA) for the summer, and I didn’t want to go because I wanted to visit with Bob.”
She went to Coronado, of course, but thought often of Bob.
“He wrote me all the time, and I thought of him kindly,” Helen reflected with sentiment, “but my friends teased me about it.”
I asked why they would tease her about a possible love-match, the stuff girls’ dream of in their teenage years. “They were jealous, I guess,” she offered. “I never wrote back.”
Our dessert arrives – an orange cake the chef has concocted without placing it on the menu. We are lucky to get the last piece. Fanfare ensues. The cake breaks up the solace around the languished love discussion and the Crazies are in Heaven again. I find out a few days later that the Crazies went back to Gallo Blanco the very day after our lunch to get a few more slices of orange cake to keep at home for their cravings.
“That orange cake was so damn good,” Ann shares.
Helen did give me the last name of Bob, the elevator boy, but a moderate computer search of his name did not yield results.
Bob – are you out there?
RESULT
The Crazies say Gallo Blanco is beyond crazy good.  Crazy great food, crazy great service, crazy great atmosphere, and crazy love for a restaurant that has a “profound” vibe in Arizona history. A must destination…
NEXT
We dine at the Parlor in central Phoenix, formerly the space of Salon de Venus. We discuss Debbi’s architecturally perfect hairdo concocted at the salon for her eighth grade graduation in the 70’s, and her commencement speech, “Be Somebody.”