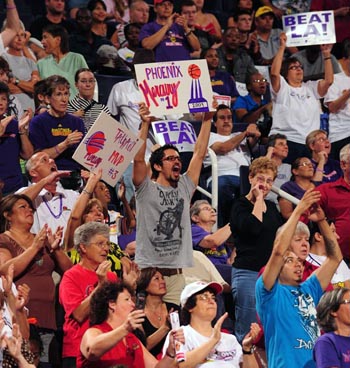 Can you feel it?  It’s playoff time downtown!
The Mighty Phoenix Mercury are in the second round of the WNBA’s Western Conference Playoffs.  We have beat San Antonio in the first round, and we are ahead one in the series against the LA Sparks.  There are two games left in the series, both of which will be played here at US Airways Center.  We Mercury fans are sure that our team can take it all the way to the Finals!
If you’ve never been to a Mercury game, you are really missing out on the amazing energy – both of the players and the crowd.  The level of play is intense.  The team is averaging – yes, averaging – 100 points per game in the playoffs.  We have one of the top 3 Point percentages in the league, and the Mercury is not afraid of running down the court for fast breaks on what feels like 8 out of every 10 plays.  The team is exciting.
The crowd, referred to as the X-Factor, is amazing.  One game recently with almost 7,000 attendees was roaring like a crowd 10 times that size for the full last five minutes of the game to help keep the team pumped for a very close finish. While I must admit to being a bit prejudiced in loving my particular section since I’ve been sitting there for 13 years, I think wherever you sit you’ll find a great mix of devoted fans – young and old.  Ticket prices for the Mercury games are absolutely one of the best values in Phoenix professional sports, so it’s easy to bring the kids or go as a group of friends without breaking the bank.
For those of you who may be Suns fans and aren’t sure if you would love the Mercury the way I do, let me share with you that when Phoenix Suns head coach Alvin Gentry was asked to comment on the Phoenix Mercury he said, “They’re a better team. I think it’s the personnel they have and how they try and play.”  Both Coach Gentry and several Suns players are regular attendees at the games.  If the Suns enjoy watching the Mercury – then I’m sure you will too.
Editor’s Note: The Mercury advanced to the Finals!! The next game is Sept. 29 at US Airways Center, so get your tickets now!