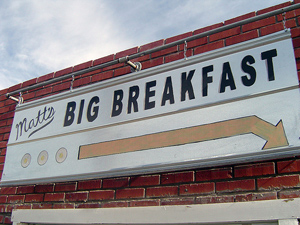 It is said that good things come in small packages. I don’t mind small packages but when it comes to breakfast (lunch & dinner) I like big, greasy portions. To quote Ed O’Neil in the movie Dutch, “Nothing burps like bacon…”
We pulled up to Matt’s Big Breakfast around 9:30 a.m. on a Saturday. Now normally in Arizona, it’s not unusual to wait outside in the sweltering heat to get a table at a popular restaurant. We had already experienced this when we visited Aaron May’s Over Easy breakfast joint some months back. The day I went to Matt’s Big Breakfast was quite the opposite experience. It rained all morning in the Phoenix Valley and was still raining when we pulled up to Matt’s. The restaurant is just a tiny building located in Downtown Phoenix… I suspect at one time it was an old house. The wait is all part of the experience, however don’t come here if you have a time sensitive event scheduled for after breakfast. After about an hour and a half of soaking in the rain we were seated at the counter. Matt’s is a bustling establishment with bright decor, and the seating in this place is tighter than Joan Rivers’ face; just five or six tables and a counter that can hold maybe another five or six guests.

Not that I’m trying to ride the coattails of Diners, Drive-ins, and Dives’Guy Fieri, but yes, he has been here too in one of his episodes (hey, can I help it that he likes to try the same places as me?), which no doubt ably contributes to some of Matt’s success. There is even the little signature homage to Guy on the wall inside.
Matt’s menu is small, but jam-packed with all kinds of breakfast goodness. He’s got a breakfast sandwich called “The Five Spot,” an omlet, a waffle, and pancakes just to name a few. Traditional breakfast beverages (including the rarely seen RC Cola) are also offered. He also keeps a special item on the board , which today was a three egg scramble, with Fontina, crimini mushrooms, and spinach. My dining companion L. ordered the special, but today I was feeling like a big waffle with some greasy bacon ($6). I had coffee and skipped the OJ today, although it was clearly freshly squeezed and looked delicious.
The food arrived about 15 minutes later: nice solid, heaping portions. I love big breakfast like this, it just sets the tone for the rest of the day. The waffle was made from scratch, fluffy, dusted with powdered sugar, served with warm maple syrup, and a big scoop of butter. I especially liked the bacon – it was that good thick cut bacon. L’s scramble special was also delicious. The Fontina and spinach blended well together with the eggs – although I enjoyed the hash browns the best. They still were hot when they arrived and they were nice and crispy the way hash browns should be.
Breakfast ran about $20 for the two of us, so we walked out of Matt’s with full stomachs, money remaining in the wallet, the rain had stopped, and the sun was shining on our shoulders. As I was walking back to the car I could see the famous Westward Hooff to my right and thought to myself this was shaping up to be a great day! One word verdict on Matt’s Big Breakfast: deliciouslygreasyheapinghomemadegoodness.
Or I could just say, a tiny place with big food.