The automobile is so ubiquitous in Phoenix that it has even crept into the way we speak. With rare exception, we do not talk about where we live in terms of neighborhoods or districts, but in terms of intersections.

You hear, “I live at 7th Ave and Camelback” or “I live in North Phoenix off of (fill in the blank)” but never a reference to an established neighborhood. (There are exceptions, but they are few.)

I think it’s unfortunate that our Phoenix lingo doesn’t include references to neighborhoods, the areas that should be little pockets of density like mini-cities within the city. I’m thinking of places like North Park, Hillcrest, and Kensington in San Diego, or Sugar House or the Avenues in Salt Lake, Lakeview or Andersonville in Chicago, Georgetown or Dupont Circle in D.C. Each of these neighborhoods has its own character, charm, and history and each neighborhood is intregal to sustaining a healthy downtown core. Without neighborho 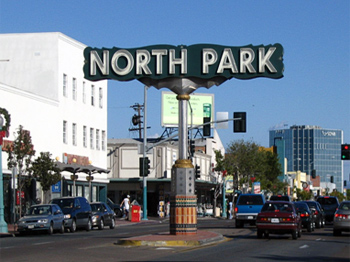 ods, mixed use buildings and walkable streets, a town center can never mature into an urban city because it will lack the vibrancy and innovation necessary. If downtown Phoenix is the urban heart or Arizona, then people are the lifeblood and the neighborhoods where the people live are the organs that supply it.

I’d like to see the city government take a more active role in “branding” the existing neighborhoods. (And by “take a more active role” I mean cut the red tape, back off and stop imposing more and more restrictions that insist on a suburban style of development.) Did you know there are actually 35 historic neighborhoods in Phoenix? I did not; I am able to identify just a handful. Of those I have a shaky idea about where they are; I can vaguely discern when I am in one. Willo is pretty obvious. Coronado and Garfield are a little more inconspicuous. However, I’d have to look at a map to identify exactly where those two neighborhoods are.

But there is one neighborhood in my mind that has clear boundaries and has developed into a healthy, urban neighborhood. That’s Roosevelt. The residents and business owners have turned it into the heartbeat of First Friday and the epicenter for the arts and urban culture downtown. They even have a light rail stop smack dab in the middle of it all.

It would be awesome to see the neighborhood business district do something like this. Not necessarily a carbon copy, but something that sets the neighborhood apart from everything else. When asked where someone lives, the person can answer, “I live in Roosevelt” instead of referencing a cross street.

I’ve always thought that the Eagle Gate Monument in Salt Lake is an impressive landmark. It’s more an arch than a gate and it is more historical than a neighborhood marker. But why not something like this in Roosevelt? A copper arch spanning across the street, topped with a star or a sun, created by a local artist, with the name “Roosevelt” emblazoned across the sky.

I’ve started referring to the neighborhoods by name. I’m hoping it will catch on.