Last week in this space I discussed the Suns’ schedule, and how much more difficult December’s opponents are collectively than, say, October’s or November’s.
That entry didn’t mention the New York Knicks but perhaps it should have.
December got off to a rocky start for your favorite pro hoops squad as the Suns (14-5) were thoroughly humiliated by Mike D’Antoni’s Knicks 126-99 at Madison Square Garden on Tuesday. Danilo Gallinari, David Lee and Al Harrington dominated Phoenix in the low post and the Suns–held below 100 points for the first time this season–were out-run-and-gunned by their old coach’s new (and far-less talented) team. 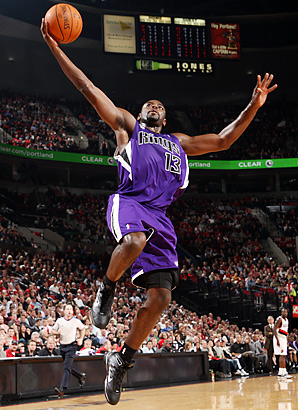 Fortunately, there’s no time to mope about Knicks loss because a) the Suns still own one of the NBA’s best records; and b) tonight they visit their old pal Shaquille O’Neal, LeBron James and the 12-5 Cavaliers. Since opening the season at 0-2 the Cavaliers have ripped off 12 wins in 15 games and once again find themselves at the top of the Eastern Conference standings.  The Suns were swept by Cleveland in last year’s two-game season series with Mo Williams averaging 37 points in the two Cavs victories. Steve Nash has averaged 25 points in his last three games against Cleveland. (Update: The Suns lost 107-90.)
Here’s the rest of the Suns’ week ahead:
Saturday vs Sacramento
At 8-8, the Kings are one of the league’s most pleasantly surprising teams due in large part to rookie point guard Tyreke Evans, who is averaging nearly 18 points and 5 assists a game. If you’re looking for a reason to come down to US Airways Center and see the game in person, Evans stands out on the marquee. He was Rookie of the Month for November and his oversized 6-foot-5 frame, ball-handling skills and court vision remind some of a young Magic Johnson.
Sunday at Los Angeles Lakers
Ugh. Playing Kobe and Co. at Staples Center is never a good time, as evidenced as recently as Nov. 12 when the Suns were discarded by the Lakers 121-102. This game is significant for a multitude of reasons, none more important than the head-to-head tie-breaker should the two teams end the season tied atop the Pacific Division. It’s a 7:30 p.m. start, which means you might want to head out to a sports bar so you can watch both the Suns and the Cardinals, who host the Vikings on Sunday Night Football. Here’s a list of the best places Downtown to watch a game.
Tuesday at Dallas
It’s always fun when Nash reunites with his BFF Dirk Nowitzki and the Mavericks but the last time the Suns were in Dallas (April 5) they were fighting for a playoff spot and got blown out on national TV 140-116. Nash loves playing his old team and has averaged 23 points and 11 assists in 26 games (including postseason) since signing with Phoenix but he won’t be the only player on the court facing his old team. Former Suns’ All-Star forward Shawn Marion has found a home with the Mavericks and is averaging 12.7 points a game, third on the team behind Nowitzki (27.2) and Jason Terry (17.8).
Go Suns!