The Suns (17-8, 2nd in the Pacific Division) continue their pilgrimage through a brutal December schedule this week, with pivotal matchups against an Eastern Conference titan and a pair of up-and-coming teams led by budding superstars.
Thursday at Portland
The Suns travel up to Portland’s intimate (read: high school gym-like) Rose Garden to tangle with the Trailblazers in another showcase game on ESPN (8:30 tip). Let’s hope the World Wide Leader is a good-luck charm. Playing on ESPN last Friday, the Suns notched a signature 106-103 win over Eastern Conference heavy Orlando. The Blazers (15-11, 3rd in the Northwest Division)  started the season hot before losing center Greg Oden to season-ending injury. Portland has since dropped three of five games, including losses at New York (the Suns can certainly empathize), at Cleveland, and at Milwaukee. Player to watch: Blazers All-Star guard Brandon Roy is averaging 21 points a game. 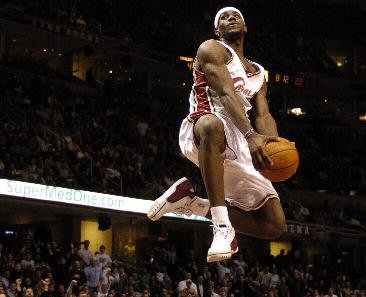 Saturday vs Washington
The Wizards (7-16, 5th in the Southeast Division) are coming off a 112-109 loss at Sacramento and are struggling so mightily that fans are being enlisted to help coach. Phoenix won 102-90 at Washington back on Nov. 8 behind 22 points from Jason Richardson and 17 assists from Steve Nash. Wiz coach Flip Saunders’ seat keeps getting hotter and hotter as Washington flops and flails despite having three All-Stars (Antawn Jamison, Caron Butler and Gilbert Arenas) on the roster.  This is a game the Suns–who sport an unblemished 9-0 record at US Airways Center–absolutely must win. Player to watch: A’mare Stoudemire, who had 28 points and 14 rebounds in Tuesday’s 116-104 win over the much-hated Spurs.
Monday vs Cleveland
There are big games, and then there are BIG GAMES. Monday’s date with the Cavaliers (19-7, 1st in the Central Division) would fall into the latter category. Not only is it the only scheduled visit from former Suns center Shaquille O’Neal and a certain global icon named LeBron James, but it’s an opportunity for the Suns to exact a bit of revenge on the Cavs two weeks after getting throttled 107-90 in Cleveland on Dec. 2. Plus, a win would give the Suns a victory over each of the Eastern Conference’s Pantheon of elite teams (Orlando, Boston and Cleveland). Player to watch: O’Neal’s return to the desert is fun and all, but James is an electrifying once-in-a-generation player.
Wednesday vs Oklahoma City
No matter what happens against the Cavaliers, the Suns would be well advised to regain their focus quickly before lacing up against the Thunder (12-12, 4th in the Northwest Division). Led by third-year swingman Kevin Durant, who leads the team in points (27.8), rebound (7.1), steals (1.7) and appearances on SportsCenter (nightly), the Thunder also employs an electrifying second-year point guard in Russell Westbrook, who ASU fans might remember from his days with UCLA. Player to watch: Durant, who is fourth in the NBA in scoring behind Kobe Bryant, LeBron James and Carmelo Anthony.