The Suns (18-10) look to circle the wagons after suffering their first home loss in nine months Monday night to Shaq, LeBron and the Cavaliers. A home date with the mighty Lakers looms but the team’s tough December schedule eases up just a bit in the week to come. 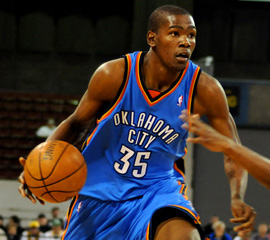 Wednesday vs. Thunder
If you want to get a peek at the future of the NBA, come down to US Airways to watch Thunder swingman Kevin Durant. The third-year pro out of Texas is the league’s fourth-leading scorer at 27 points per game and has the upstart Thunder (13-13) in position to contend for a playoff spot. Player to watch: Durant, who in addition to carrying the scoring load, leads Oklahoma City in rebounding and steals.
Friday vs. Clippers
Santa’s gift to the Suns? A home game with the Clippers (12-15). The other team that plays at Staples Center is still without overall No. 1 draft pick Blake Griffin but does boast a formidable starting five, including All-Star Baron Davis, second-year shooting guard Eric Gordon, and All-Defensive Team center Marcus Camby. Player to watch: Sasquatch-like Chris Kaman, who is averaging 19 points and 9 rebounds per contest.
Saturday at Golden State
Like scoring? Then tune as the Suns run and gun with the shoot-first, ask questions later Warriors (7-19). Monta Ellis (averaging 24 points a game) needs some help if Golden State is going to get back to the playoff status is enjoyed two seasons ago when it surprised the NBA by ousting the Mavericks in the first round of the playoffs. The Suns beat the Warriors 123-101 on Oct. 30 behind 24 points from currently injured Leandro Barbosa and six 3-pointers from Channing Frye. Player to watch: Warriors’ rookie shooting guard Stephen Curry, who scored a career-high 27 points Dec. 19 in a loss to Washingon.
Monday vs. Lakers
The Suns will look to gain some ground in the standings against Pacific Division-leading Los Angeles (22-4), which sports the top record, deepest roster, and best player (Kobe Bryant) in all the land. ESPN will be in town for this one so make sure you head Downtown to suck up the excitement. Player to watch: Bryant, who has two of four game-winning buzzer-beaters in the NBA this season.