5 Ways to Get People Thinking About Alternative Transportation Downtown

Downtown Phoenix is coming alive with new businesses opening up in our urban core – all of them are easily accessible using the light rail.  However, in some cases you might want to combine more than one mode of alternative transportation (a bike, a taxi, etc).  Doing so will help you enjoy the many restaurants and coffeebars that Downtown has to offer.  Recently, over on my blog, I talked about ways the light rail improved the quality of life in Downtown Phoenix.  While the light rail has helped, there still needs to be more awareness about other things people can do to drive less and truly help green the city.

Bike rentals or a bike rental kiosks in various parts of Downtown would be hot.  Right now, the nearest bike rental facility is either way south of Downtown or on the east side of the airport. This is why we need a bike rental kiosk in our urban core.  Tucson is trying out a bike kiosk and so are a handful of other major cities around the country.  Why not here?  True, there was a bike sharing program in Phoenix at one time, but people kept stealing the bikes.  A rental program in downtown would encourage people to leave their cars at home, or at least encourage people to take the train into town and rent a bike once they’re here.  You can seee the Tucson bike kiosk story here. 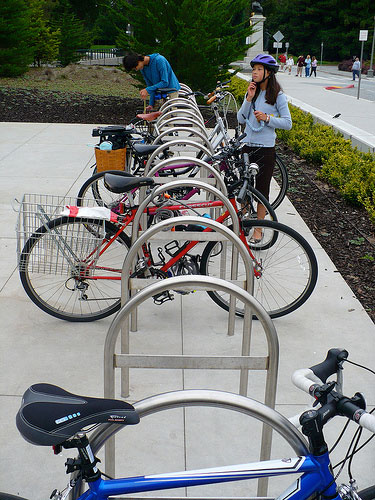 Bike racks are lacking in many parts of Downtown.  Copper Square and the Downtown Phoenix Partnership have a good supply in the heart of Phoenix, but  we need more and lots of them throughout the rest of Downtown, midtown and uptown.  Secure areas to park our bikes will encourage more people to bring their bikes into town.  Many cities across the country are finding there are federal funds to pay for racks if the location meets city ordinances.  Recently, I pointed out how restaurants along the light rail are seeing green by installing new racks on their own.  See a previous story I wrote on the bike racks in Downtown Phoenix here.

Zipcar, a car sharing program, has cars in most major cities including right here in Phoenix.  Zipcar is an hourly car rental service has several location in the Phoenix market, mostly around the three Arizona State University campus locations.  They’re inexpensive when you use the cars for short trips like running errands, and can get more expensive when you rent them for longer periods of time.  There’s even an iPhone app for convenient reservations.  I realize the service and concept is relatively new for many people, however I don’t think enough people know about this service, especially when I tell people and their reaction is ‘what’s a Zipcar?’   If that’s your’re question too, read more here.

Curbside taxi service at light rail stations apparently is not allowed to offer service to and from a light rail station. If they were, think of how easy it would be to get to the airport or to a baseball or basketball game from the various park and rides along the light rail line.

Pedicabs are a quick and easy way to get around in the center of town.  Not only are they a green form of transportation, but the pedicab drivers and the carts add character to downtown Phoenix.  I took a ride on one the other night and found out how many hundreds of pounds each one can haul.  Read more, plus get the number to call a pedicab here.

The city of Phoenix has come so far in such a short amount of time when it comes to promoting alternative transportation.  As you can see from this list, there’s still more work we can all do to get people out from behind the wheel of  a car.