I’m putting down my cheerleader pom poms to take a serious and critical look at Downtown. 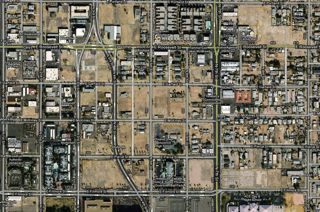 This is a Google Map of Downtown Phoenix. (I concede it’s not the most recent, but this photo still reflects the overall state and condition of Downtown.) Look at those empty, embarrassing dirt lots. And that surface parking! This looks and feels nothing like an urban city, but more like a rural farming community. East Mesa has more infill than this!
And that’s my problem.
With the explosion of growth in the past 40-50 years in the Valley, why has hardly any of it happened in the center? There is something fundamentally wrong with a city that can attract developers to build houses and amenities 40-plus miles removed from the Central Corridor but that is unable get anything built in that Central Corridor. Where are the laundromats? The drug stores? The grocery stores?! The residences? The gyms? The post offices? The restaurants? Where is the landscaping?
I’ve been told that land in Downtown Phoenix is expensive. What exactly makes this land so expensive? It’s not like it’s sitting next to an ocean, or Central Park.
Does the City of Phoenix own most of this land? Then let me make a suggestion: City of Phoenix, STOP land banking. You’re in a financial crisis, REZONE this empty land and sell it to the highest bidder and let them build whatever they want to build. What are you doing, Phoenix City Council, to make this land ripe for development? Phoenix, if you don’t own this land, raise the property tax on vacant lots. Create the incentive to build something, anything on this land. (A public garden perhaps.) Be more aggressive. Whatever it is you’ve been doing for the past 30 years is not working.
According to the Phoenix.gov Web site, “Projections show the region is expected to grow by nearly 60 percent by 2030, bringing the population to more than 6 million people.”
Imagine if merely 1 percent of that growth happened in Downtown. Just 1 percent and Downtown Phoenix would be unrecognizable.
I don’t buy the argument that “people in Phoenix don’t want to live in a city.” Bull! There are plenty of people who come to Phoenix or who are from Phoenix that would love a true urban life. I do. All my friends do. But many of my friends are tired of waiting and have left Phoenix for more urban pastures in other cities.
I appreciate the beauty and majesty of a skyscraper as much as anyone else, but a skyscraper does not a city make! A city must grow organically, from the ground up, to be healthy. There are too many vacant lots that must be filled to create the street scape and amenities necessary before we reach for the sky.

Join us on Wednesday, April 20 for Bike to Work Ph

From the calorie-loving creators of the Phoenix Pi