As someone who before Saturday hadn’t seen to a proper play in an alarming number of years, I possess neither the experience nor desire to break “The Glass Menagerie” down line by line.
However, what I can tell you with supreme confidence is that “Menagerie,” playing thru April 11 at Herberger Theater, is well worth the price of admission. 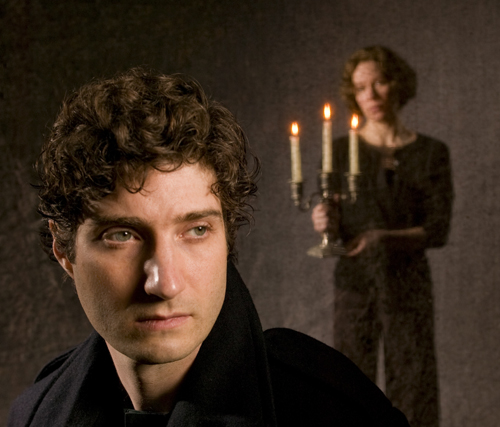 Director Juliette Carrillo’s treatment of the Tennessee Williams’ classic–widely believed to be an autobiography of Williams’ life during his artistic awakening–is daring while giving the proper amount of respect to a classic.
1930s-set “Menagerie” is the story of the St. Louis tenement-dwelling Wingfield family–Mother and former Southern Belle Amanda with her false sense of entitlement and love of melodrama, and siblings Tom and Laura [played by Noel Joseph Allain and Barbra Wengerd, pictured left], older brother stuck towing the line as man of the house and awkward younger sister who alternates getting done in by physical and social limitations .
Desperate to erase her own life’s failures (most notably marrying “a telephone man who fell in love with long distance”) Amanda tries most unsuccessfully to will her children to happiness. And while the smothering mother celebrates the pending arrival of a long-awaited Gentleman Caller for her daughter, the audience is left to cringe with the knowledge that no good can come from the visit. Yes, true to Tennessee Williams form, “The Glass Menagerie” is a deep, character-driven tale.
In a twist, Carrillo forces the four-person cast (five if you count sensational violinist Jay Goldin) to begin the play on a naked stage, introducing the Wingfield apartment set piece by piece in a visual crescendo that compliments the rising action of the script. It’s a bold move that really worked for me. Carrillo also deserves a high five for getting more out of a cream-colored curtain than Martha Stewart.
Among the acting performances, Brian Ibsen’s turn as Gentleman Caller Jim O’Connor really stood out. His much-needed energy helped the story get where it needed to go at at time when the pace was lagging. Catalina Mayard (Amanda) also gets credit for keeping a generally abrasive character mostly sympathetic.
I could go on and on trying to impress you with how closely I paid attention but, again, this isn’t one of those reviews. The bottom line is that “The Glass Menagerie” is thought-provoking entertainment that leaves you wanting more.