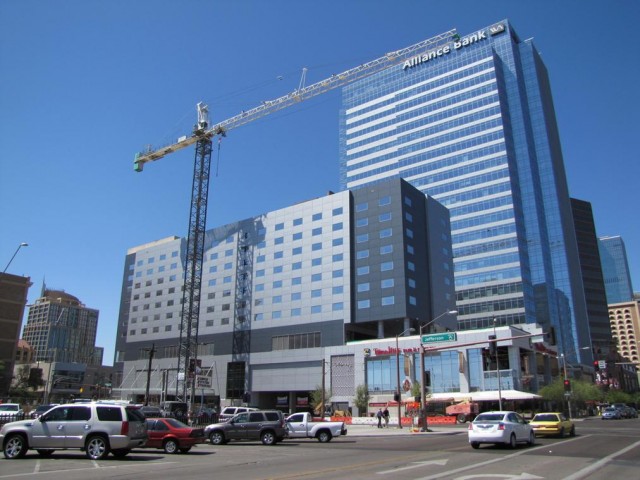 In 2012 Downtown Phoenix welcomed a variety of new construction projects as well as celebrated the completion of several major developments.  The Maricopa County Court Tower was completed in February, consolidating courthouses across the Valley and bringing thousands of jurors and attorneys to the core of Downtown Phoenix.  The complex is home to 32 courtrooms and a pedestrian plaza, helping to make the intersection of First Avenue & Jefferson one of the busiest intersections in all of Downtown.  The success of CityScape has not dimmed in the past year.  The office and retail portions of CityScape are virtually full and RED Development welcomed the Hotel Palomar near First Street & Jefferson.  With 242 guestrooms and the already renowned Blue Hound restaurant, the Hotel Palomar is a welcome addition to the Downtown hospitality sector.  Construction of 240 apartments atop the hotel has begun.
Downtown Phoenix is one of the rare markets in the Valley where construction has not only continued in the public and commercial sectors, but in education and residential as well.  The Phoenix Biomedical Campus saw the opening of the Health Sciences Education Building in October.  The 268,000 square foot facility is located near the corner of Seventh & Van Buren Streets and provides lecture and lab space for the 240 students currently attending the University of Arizona College of Medicine-Phoenix.  The building will allow the College of Medicine grow to 440 students in the next few years.  Also in October, we saw the opening of the Lofts at McKinley at Fifth Avenue and McKinley Street.  This project provides 60 units of affordable senior living and was financed by low-income tax credits and HOME funds.  The project is already fully leased. 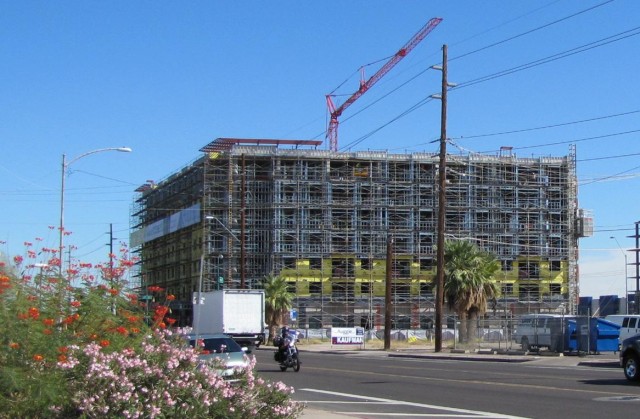 Development shows no signs of slowing down as we head into the new year.  A number of projects are currently under construction and should be completed in 2013.  Roosevelt Point Apartments is under construction at the intersection of Third Street & Roosevelt.  The student housing project will feature 614 beds in 329 fully-furnished units.  The project is being developed by Concorde Eastridge and is expected to be open for the fall 2013 semester.  You may have noticed the construction activity south of the YMCA near First Avenue & Van Buren.  The YMCA and ASU are teaming up to develop a 64,000 square foot recreation center complete with a large gym and rooftop leisure pool.  The center is expected to open in late 2013.  Other projects on the horizon include UL2, a 70-unit apartment complex being developed by Native American Connections at McKinley & Second Avenue and the Arizona Cancer Center, which is planned for the north side of Fillmore between Fifth & Seventh Streets.  UL2 is currently under construction and the Cancer Center is close to ground breaking.
Downtown Phoenix continues to grow and add buildings that are sure to become icons of our urban landscape.  If you have any questions about any of the ongoing development in Downtown Phoenix please visit the Business & Investing portion of our website or email me at dnoble@downtownphx.org.
We know you have Instagram
#DTPHX
We miss you Hans🕯 The community is invited to

Here's a snippet of What's Happening in #DTPHX thi