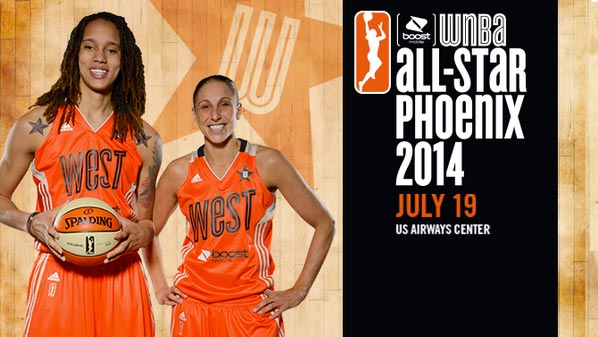 For the second time in history, the Phoenix Mercury and City of Phoenix welcome the WNBA All-Stars, all the best players of the Eastern and Western Conferences, coming together Saturday, July 19 for an exhibition game at US Airways Center.
It’s a big day for the Mercury, with both Diana Taurasi and Brittney Griner voted All-Star starters by WNBA fans, and Candice Dupree selected as a reserve. With three Mercury players represented, in addition to the national recognition of hosting the game, it’s a huge win for Downtown Phoenix.
Under the national spotlight, athletes and visitors from around the country will see a very different city than in 2000, when Phoenix last hosted the All-Star game.
Fourteen years ago, US Airways Center was still America West Arena, Comerica Theatre didn’t exist yet and ASU Downtown was a mere glimmer on the horizon. Just to paint a picture of the changes, the year 2000 marked completion of the Collier Center, establishment of Roosevelt Row and opening of the new federal court building, just to name a few.
Today, Downtown’s immense growth can be seen in the vibrant music and entertainment scene, gorgeous new residential properties and expansive commercial developments. More than ever, it’s a nationally recognized destination, and one that every spectator attending Friday’s Fan Fest and Saturday’s game is bolstering by supporting Downtown events.
So as the Mercury ride their wave of success, reflecting on two championship titles and working toward a third this season (Phoenix currently holds the best record in the WNBA), residents and visitors should reflect upon the triumphs of Downtown Phoenix as a whole, and how far it has come.
Go Mercury!
Boost Mobile WNBA All-Star 2014 Schedule:
Friday, July 18:
WNBA Cares Basketball Clinic: The All-Stars host a basketball clinic for 65 Boys and Girls Club youth from around the Valley. Open to media only. Located at US Airways Center main court 9:30 a.m.
East and West All-Star Open Practices: Fans of all ages get a sneak peek of the All-Stars as they prepare for the big game. This event is free of charge and open to the public 3-5 p.m.
All-Star Fan Fest: Enjoy Mercury and Suns entertainers, performances by local bands and special giveaways throughout the evening. Fan Fest features family-friendly activities such as bounce houses, basketball hoops and Flow Rider outdoor surfing machine. The event is free and open to the public.
Saturday, July 19:
Boost Mobile WNBA All-Star 2014: Watch the world’s greatest female basketball players on one court, with a portion of the proceeds benefiting All-Stars and Stripes charity for military heroes and their families.  Individual tickets $20, US Airways Center. The game starts at 12:30 p.m.