The Phoenix Mercury earned a spot in their first WNBA Finals since winning their second championship in 2009. 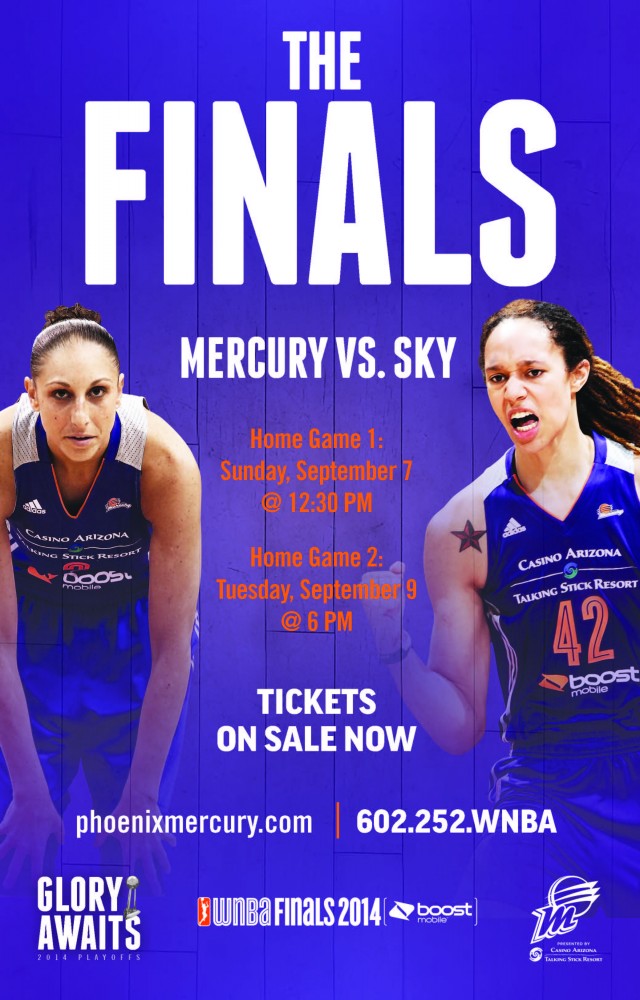 The team with BOOST on the front of their jerseys boasts three mega-watt All-Stars, including one of the greatest players the game has ever seen in Diana “White Mamba” Taurasi, dunking sophomore phenom Brittney Griner and Candice Dupree.
The Mercury enter the Finals with a league-best 29-5 record, including 18 consecutive home victories. Heck, they haven’t tasted defeat at US Airways Arena since May 23.
But they’re not done. Three more wins against the Eastern Conference champion Chicago Sky are necessary to reach their ultimate goal: A third WNBA championship.
That’s where you, the foam finger-waving Downtowner, come in.
If the team is going to end this magical season with a trophy hoisted over it’s collective head it needs the rabid support of the Downtown community. We need to show the love. Give some dap. Bring the pain.
So, how can you get behind our First Ladies of the Fast Break?
* Buy tickets to Sunday’s Game 1 or Tuesday’s Game 2 by calling 602.252.WNBA or visiting the US Airways box office
* Flash your best Mercury-colored threads
* Ask a Downtown Ambassador how you can register to win FREE vouchers to the home games
* Cheer hard. Real hard
Let’s do this.