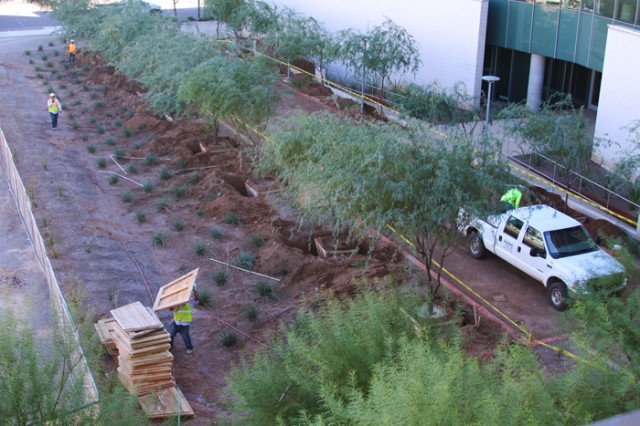 Trees often fall victim to the path of progress. But in the second public-private partnership of its kind, trees uprooted during the course of a big Downtown development project found new homes, thanks in part to the Downtown Phoenix Partnership.
After breaking ground Oct. 16 on the Biosciences Partnership Building – a new addition to the University of Arizona College of Medicine near Seventh and Fillmore streets – crews began digging up, boxing and preserving 42 Desert Museum Palo Verdes, Native Mesquites and Sweet Acacias.
These types of trees typically cost between $500 to $1000 each, depending on the size.
“We need to be very mindful that we’re not just ripping trees out of the ground – it’s a sustainability issue,” said Ray Cabrera, streetscape manager at the Downtown Phoenix Partnership. “These are public assets and we need to make sure that we’re protecting them.”
In an effort to preserve these mature desert trees, the Downtown Phoenix Partnership worked with the University of Arizona, City of Phoenix, DPR and Sundt Construction and is currently in the process of relocating them to the Space Between “parklet” activation project on First Street between Taylor Place and Valley Youth Theater, where they will provide shade, beauty and interest.

According to Djuro (Judo) Rosic, LEED AP for DPR Construction, it’s a win-win situation for everyone involved.
“We had the opportunity to save some and get rid of some and it worked out perfectly that we saved them all,” said Rosic.
In a similar situation with Arizona State University’s law school, which went under construction in July, the partnership salvaged 43 Dalbergia sissoo trees, commonly known as Indian Rosewoods, which are known for the quality of their shade canopy.
Those survivors are now taking root along Adams Street between Second Avenue and Second Street, where they will replace a number of immature Palo Breas, which are not conducive to small urban tree wells and topple easily during monsoon storms.
“It’s become apparent over the last several years that the life span of these desert trees, here in this urban environment, is much shorter and makes them a hazard,” said Cabrera. “It’s in our best interest to phase out the desert tress that we have in these tiny tree wells and put in something that’s going to thrive.”
Because of this, the newest batch of salvaged desert trees from the U of A site will stay in boxes until larger tree wells or more suitable habitats can be determined.

In all, 85 trees were rescued from the wood chipper since July. But the long-term goal, according to Cabrera, is creating a comfortable, beautiful and safe urban shade canopy that will stand the test of time.