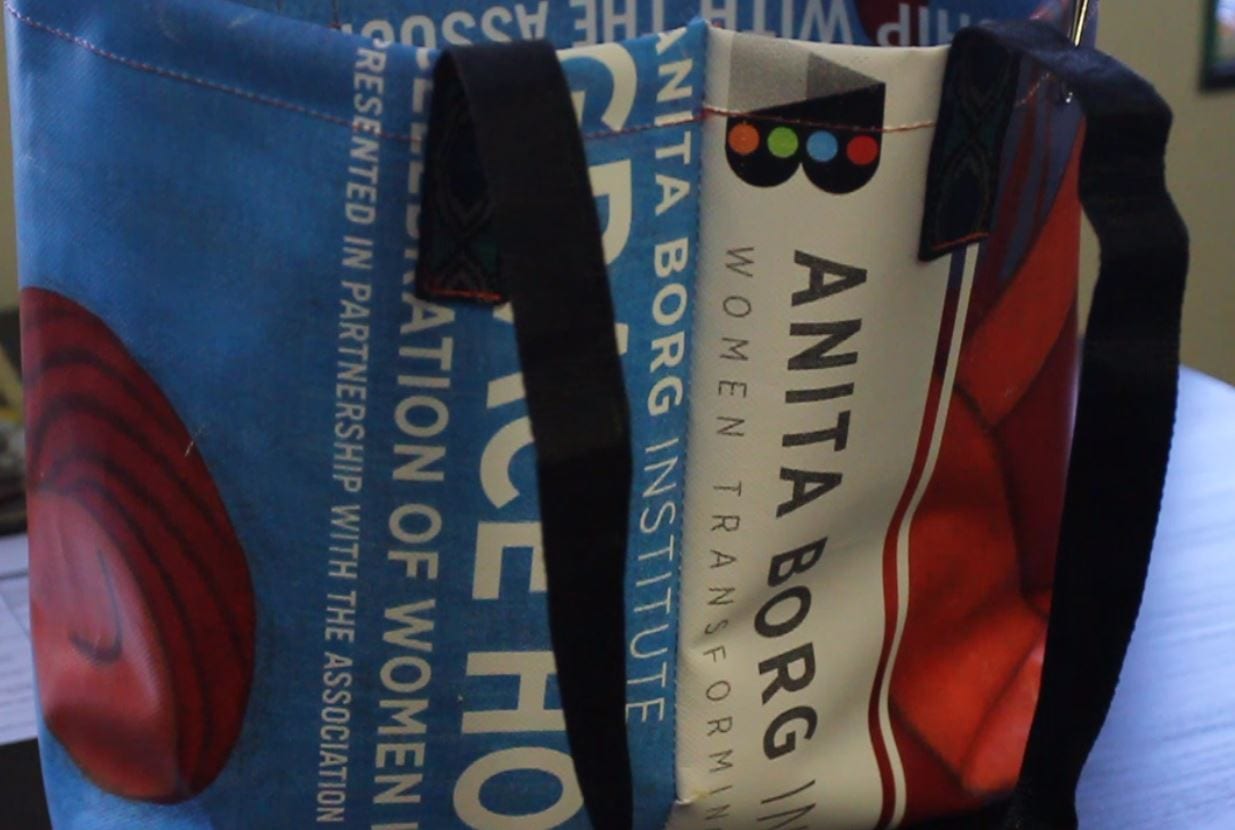 In the brightly lit basement of a historic building in the Roosevelt Row Arts District of Downtown Phoenix, Ma Kyi can often be found sewing plastic convention banners into reusable grocery bags and tablet sleeves.
This may seem like an odd enterprise. But the upcycled end product is not only useful and durable but really quite beautiful too — not unlike the story of how Kyi came to make them.
Through a unique partnership, which started December 2014 between Downtown Phoenix Inc. (DPI) and Refugee Focus, a division of Lutheran Social Services of the Southwest, these durable pieces of plastic are getting a new lease on life. Instead of piling up in a landfill, the banners are being transformed into utilitarian bags, hand-sewn by refugee women. 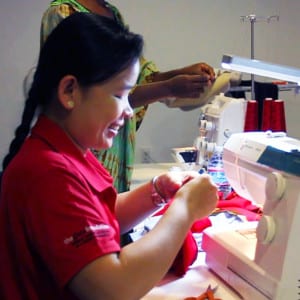 Refugee Focus resettles nearly 800 refugees like Kyi every year, offering personal development and skill-building classes like sewing, nutrition and computer science, in addition to a host of other services.
For Kyi, the Banner Bag Project, as its been dubbed, started as an opportunity to learn how to sew and use commercial machines. It’s grown into a skilled trade and job opportunity.
“When I was in Burma I made bags by hand not with a machine, so I’m more interested to work with machines,” she said through an interpreter, Alexandra Bo. “I’m very happy to have this job.”
Downtown Phoenix Inc. operates street and light pole banner services downtown, which is how it came to possess mass amounts of old banner material. The organization provides printing, installation and removal services for conventions and other organizations like ASU Downtown, the Arizona Diamondbacks, Phoenix Suns and others.
When the season or event comes to an end, some people want their stuff back but most of them don’t, according to Samantha Jackson, director of operations for DPI.
“We have like bucket loads of this banner material and we wanted to find something creative to do,” Jackson said. “I feel like it was one of those things where we put it out into the universe, and the universe responded.”
Meeting Jacqueline Mounce, who runs the Microenterprise and Women’s Empowerment Program at Refugee Focus, proved to be the connection Jackson was searching for.

“When we started talking to Downtown Phoenix Inc. about the banners and the possibility of doing the bags, she [Kyi] was one of the women that popped into my mind that would be interested and pick up the commercial machines quickly,” Mounce said.
After the partnership formed and the materials were secured, Kyi worked closely with other refugee women and volunteers to generate a pattern and design. The prototype was completed a month later, and in January 2015, small-scale production began.
Currently, the banner bags are being produced though a partnership with Threads Manufacturing, located at Sixth Avenue and McKinley Street. It’s a microenterprise incubator and professional sewing cooperative, where Kyi is now working part-time.
She’s still training under another refugee woman according to Cindy Kjos, owner of Threads, but someday soon, she’ll be able to complete an entire garment on her own.
“They just want to learn, which is really refreshing,” she said. “It’s very difficult to find that I think in our labor force and so it’s a very wonderful experience working with them.”
For Jackson, watching the whole project come together has been incredibly rewarding, both personally and professionally.
“You feel good as a company not putting these in a landfill and practicing sustainability, so that already had a good side to it,” she said. “But when you include this part about the refugees and how this teaches somebody a skill and a business — it just gives it such a greater feeling.”
Since coming to the U.S. in 2010 from Myanmar, formerly known as Burma, Kyi has been working on her English skills, raising her four children, meeting new people, and of course, learning how to sew.
“Good for, you know, for family,” she said through Bo. “I will support my family with this job.”
The bags are currently on sale in limited quantities at the Refuge Cafe in addition to the Phoenix Public Market and eventually, will be available online.