Be: Coffee, Food + Stuff is located inside the Monorchid on Roosevelt Street near Third Street. The Dressing Room will open in the adjacent building this fall. (Photo: Brandi Porter)

Phoenix coffee and food enthusiasts now have a new place to grab a cup of joe, grub out on creative sandwiches and open-faced toasts, and soon dine on street-style eats in the Roosevelt Row Arts District.
Located at 214 E. Roosevelt Street, Be: Coffee, Food + Stuff recently opened inside Monorchid gallery, venue and coworking space, offering a rotating menu of gourmet sandwiches and open-faced toasts to pair with your morning, afternoon or nighttime coffee cravings plus pastries from local bakeries and soft serve ice cream.
Owners Kyu Utsunomiya and Troy Watkins have years of experience in the restaurant industry and, in addition to Be, will open their second concept, The Dressing Room, in the adjacent building this fall.

“We decided we really wanted to be a part of the neighborhood,” he said. “This is different [than other parts of the Valley]. The community has been so welcoming.”

The Dressing Room, a building near Third and Roosevelt streets, once served as the dressing room for a drag and gay bar next door, 307 Lounge. Hence, the building’s and now restaurant’s name.
And in a few more months, the space will become a late-night restaurant serving street-style food, like burgers and tacos, as well as beer and wine.
Utsunomiya said they were committed to adaptively reusing a space for their concept as well as creating a concept that blends well with the community. 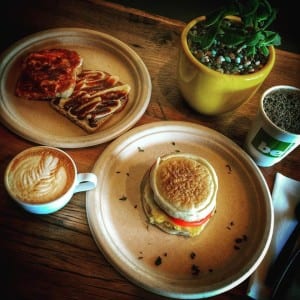 They plan to achieve that, he said, by having artwork displayed on the walls as well as having local artists JB Snyder and Tato Careveo paint a new mural on the east side of the wall, replacing the existing mural also by JB Snyder.
After talking to community members and neighboring business owners, Utsunomiya said they took their feedback and structured the menu, prices and interior spaces to suit the area.
Be and the soon-to-be restaurant are currently divided by a wall. But not for long.
The entrepreneurs have plans to marry the two spaces by building a joint entryway between the two.
And while seating may seem limited now, it won’t be for very much longer. Utsunomiya said there will be patio space along Roosevelt Street as well as in the alleyway behind and on the rooftop of The Dressing Room.
Be is located at 214 E. Roosevelt Street and open Monday – Saturday from 6:30 a.m. to 7 p.m. and Sundays from 6:30 a.m. to 5 p.m.
We know you have Instagram
#DTPHX
Let the games begin. DTPHX Lotería starts NOW! E