A Day In the Life of the U.S. Marine Corps 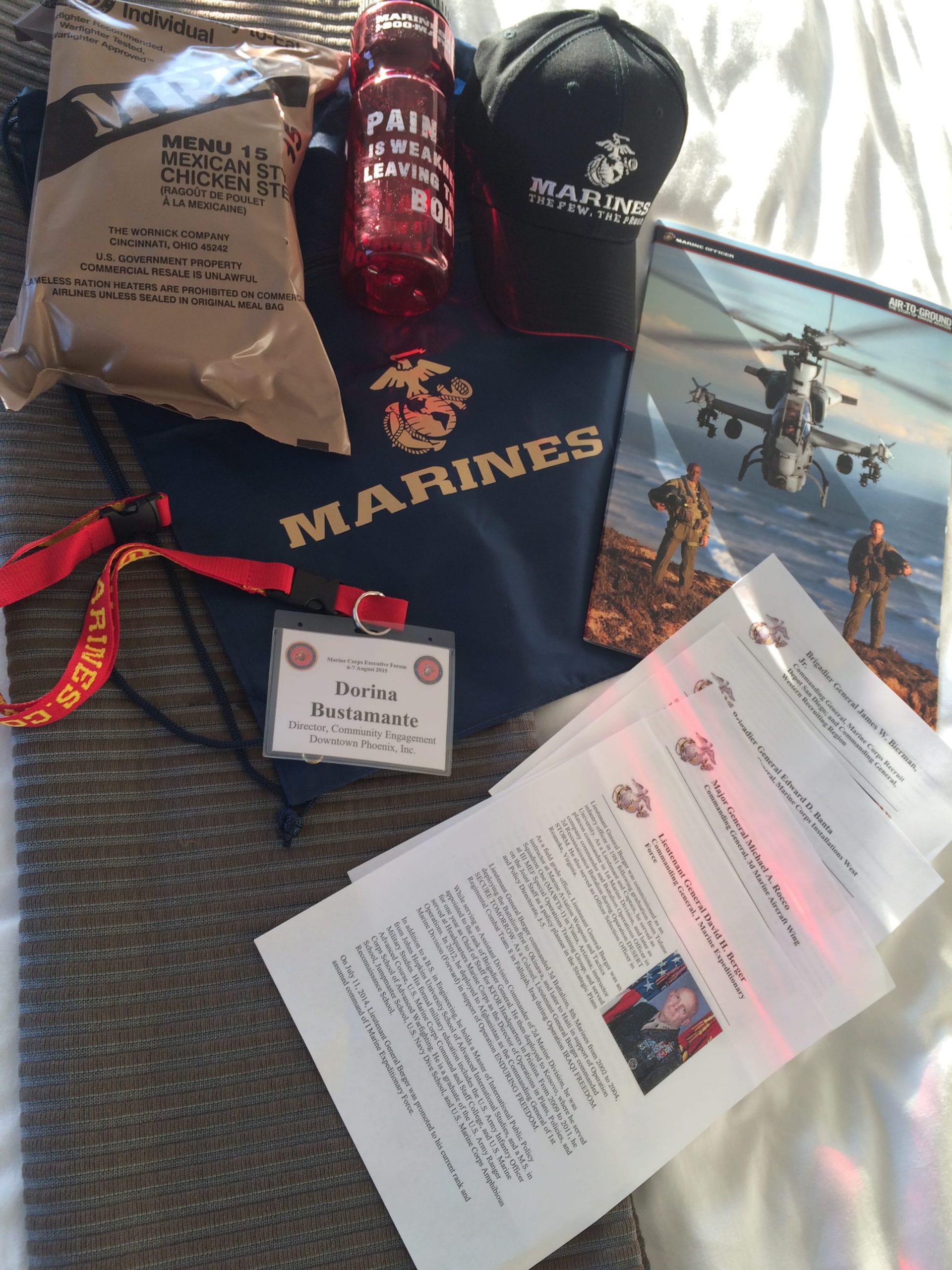 The first glimpse of what’s to come in my “Marine Welcome Kit.” (Photo: Dorina Bustmante)

After accepting an invitation to attend the Marine Corps Executive Forum (MCEF) in San Diego Aug. 5-7, I was asked to submit some pretty standard stuff — my bio, a headshot and a waiver of liability.
The waiver, however, was not so standard upon further inspection, and gave me a little glimpse of what I might be in for. I basically had to promise not to sue the federal government if I hurt myself while visiting “bases, ranges, and training areas that are designed for and used by the Marine Corps for training its personnel in the deadly art of individual and unit combat.”
So yeah, no big deal.
To give you some background, the purpose of MCEF is to educate and inform civilians like me, who have little to no exposure to the U.S. Marine Corps. As the director of community engagement for Downtown Phoenix Inc. and a liaison for Marine Week Phoenix, I felt obligated to go — but was frankly a little surprised by the invitation.
MCEF is the Corps’ premiere community relations outreach program and participants meet with senior officials from the Pentagon and are briefed on Marine operations throughout the world.
Needless to say, I was a little nervous and didn’t know what to expect. But immediately upon arrival, my nerves were put to rest by the gracious and lovely hosts of the Office of U.S. Marine Corps Communication from the Pentagon.
I met the other 15 MCEF attendees from around the country that I’d share this experience with, and after that, we received backpacks filled with our required items for the next 36 hours.
So far, so good. 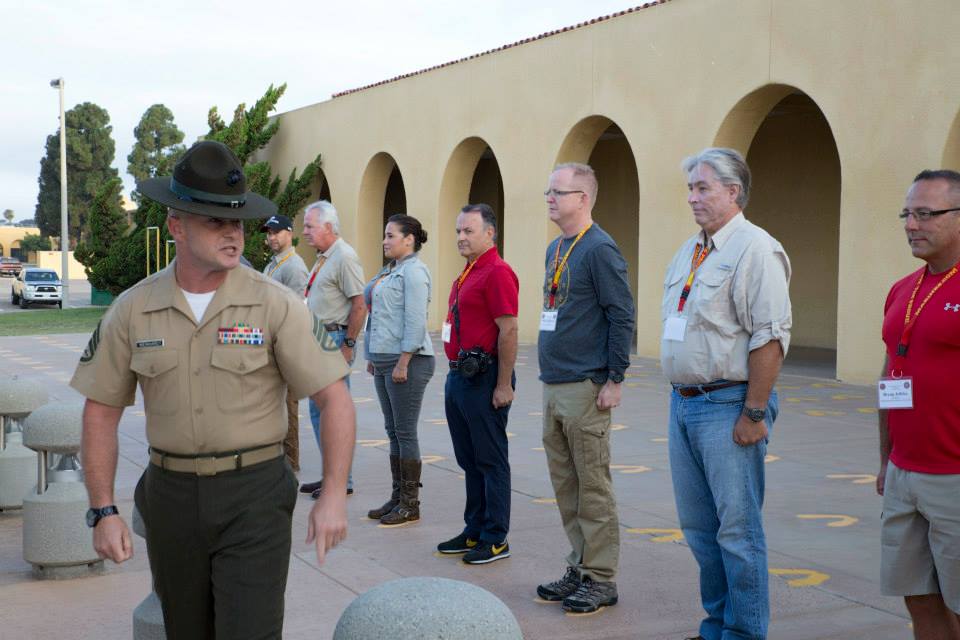 I’m the third from the left and in case you can’t tell, the fear is real. (Photo: U.S. Marine Corps)

Then I met my first drill instructor. Everything you read and see in movies about them is true. They absolutely mean business and do not mess around.
When we arrived at the Marine Corps Recruit Depot at 6:30 a.m., the instructors made it very clear who was in charge. The tone and volume of their voices had this incredible effect of making my body follow their precise instructions — even before my brain could comprehend what was going on.
Fortunately, I was not there for boot camp, though I certainly have a newfound admiration for those young recruits who complete the 13-week program. Instead, we had the rare opportunity to see the world of the Marine Corps through the lens of VIP tourists — and I for one, was ready to look at some cool stuff. 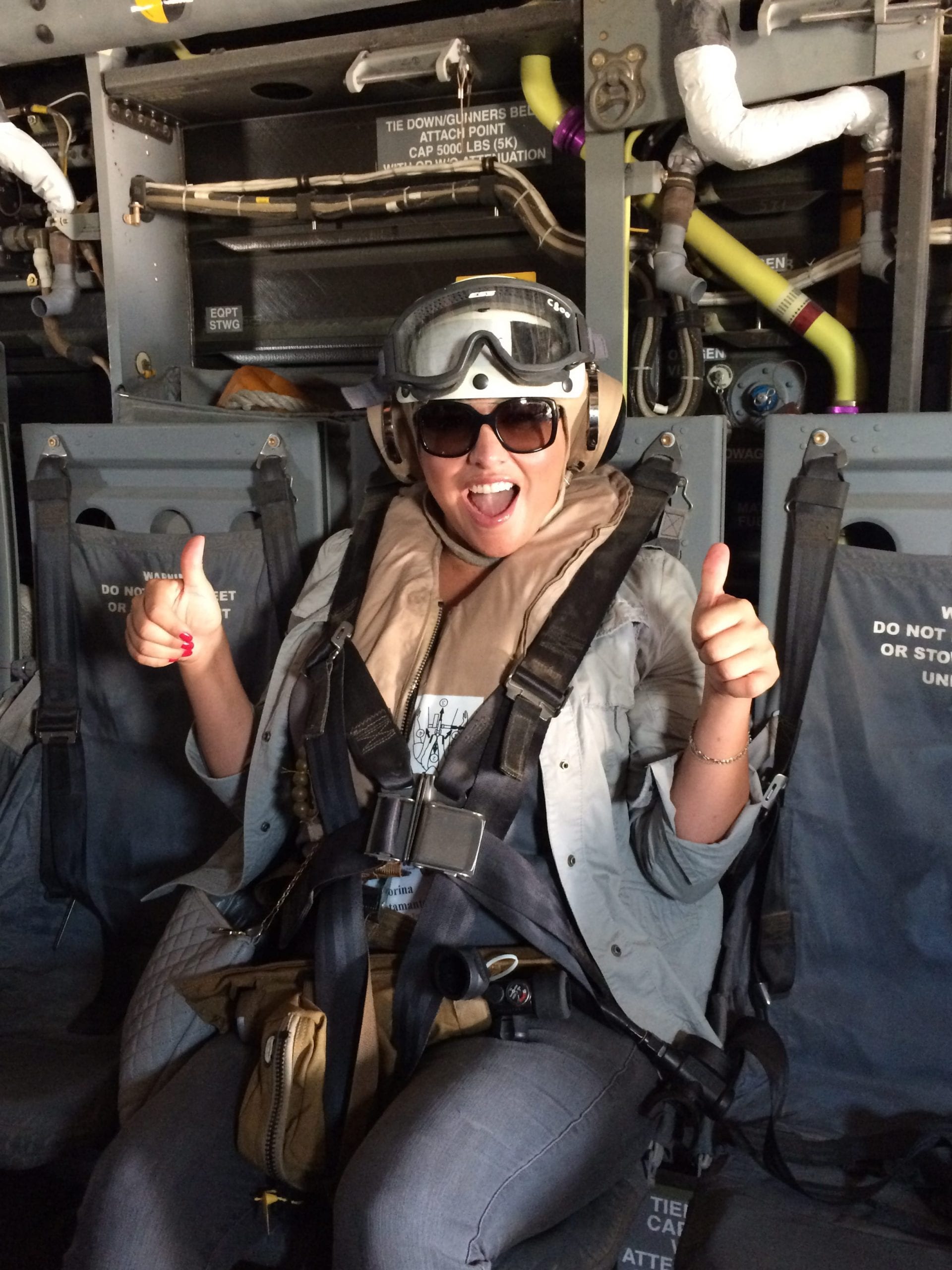 Buckled into the V-22 Osprey Tiltrotor aircraft and feeling “the need, the for speed!” – Top Gun (Photo: U.S. Marine Corps)

When I was a kid, Miramar always made me think of Top Gun, the location of the Naval flying school made famous by the 1986 movie with Tom Cruise.
Maj. Gen. Michael Rocco and his team certainly changed all that when they welcomed us to the Marine Corps Air Station Miramar.
After a fascinating presentation about the history of the Marines, they even gave us a glimpse into the future of the Corps  — which will be very rooted in family and community values, as it is today.
Rocco’s team then guided us through Hanger 6 and let us explore the Hornet F-18 fighter jet and the V-22 Osprey Tiltrotor aircraft ( half helicopter and half airplane). Now and forever when I think of Miramar, I will think of those Marines — their hospitality, professionalism and extreme dedication to service.
One of my favorite parts of this trip was being buckled into an Osprey while Marines stood in front of open doors (yikes!) as we soared up the San Diego coast to Camp Pendleton. It was both beautiful and awe-inspiring.
I knew that shooting weapons might be involved in this trip, based on the waiver, but let me tell you, shooting an M16 is much more difficult than walking in stilettos on the cobblestone streets of Rome. 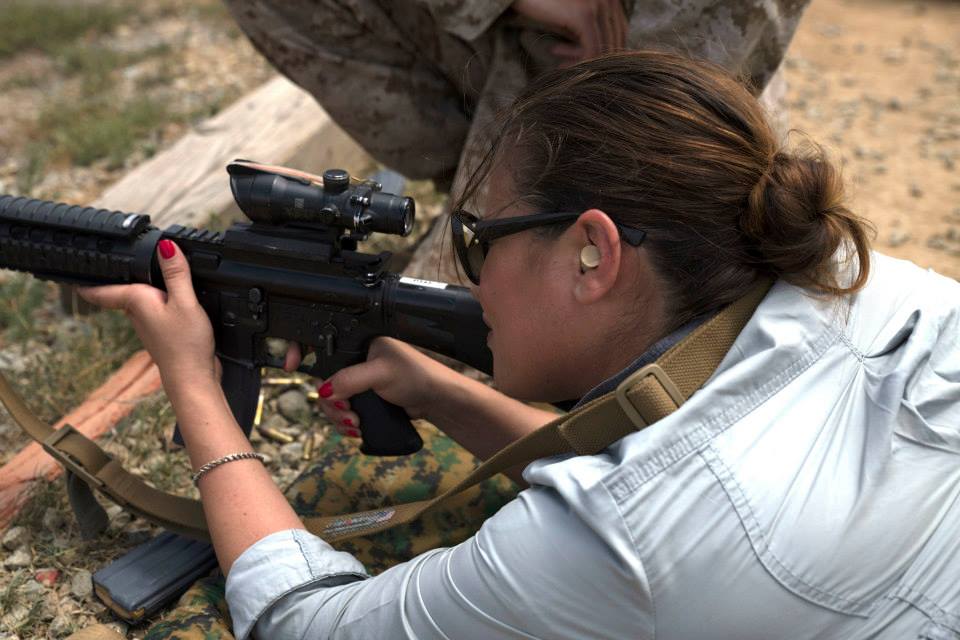 My shoulder was sore for days after target practice, which involved laying on the ground to shoot an M16 rifle. (Photo: U.S. Marine Corps)

Marines are required to meet specific marksmanship qualifications every quarter, so practicing on the range is an integral part of their daily life.
I can’t say I was a very good shot, but out of two rounds, I may or may not have hit the target once. There’s also a slight possibility it was the retired City of Phoenix Chief of Police next to me. I’m going to keep believing it was me.
Out of the 15 MCEF participants, there were only four females. So we definitely did some bonding in the locker room. Did I mention we only had 15 minutes to get ready? After a long day of touring, shooting guns and such, we had a very quick bonding session while changing out of our dusty clothes and primping for a private dinner at the general’s house. 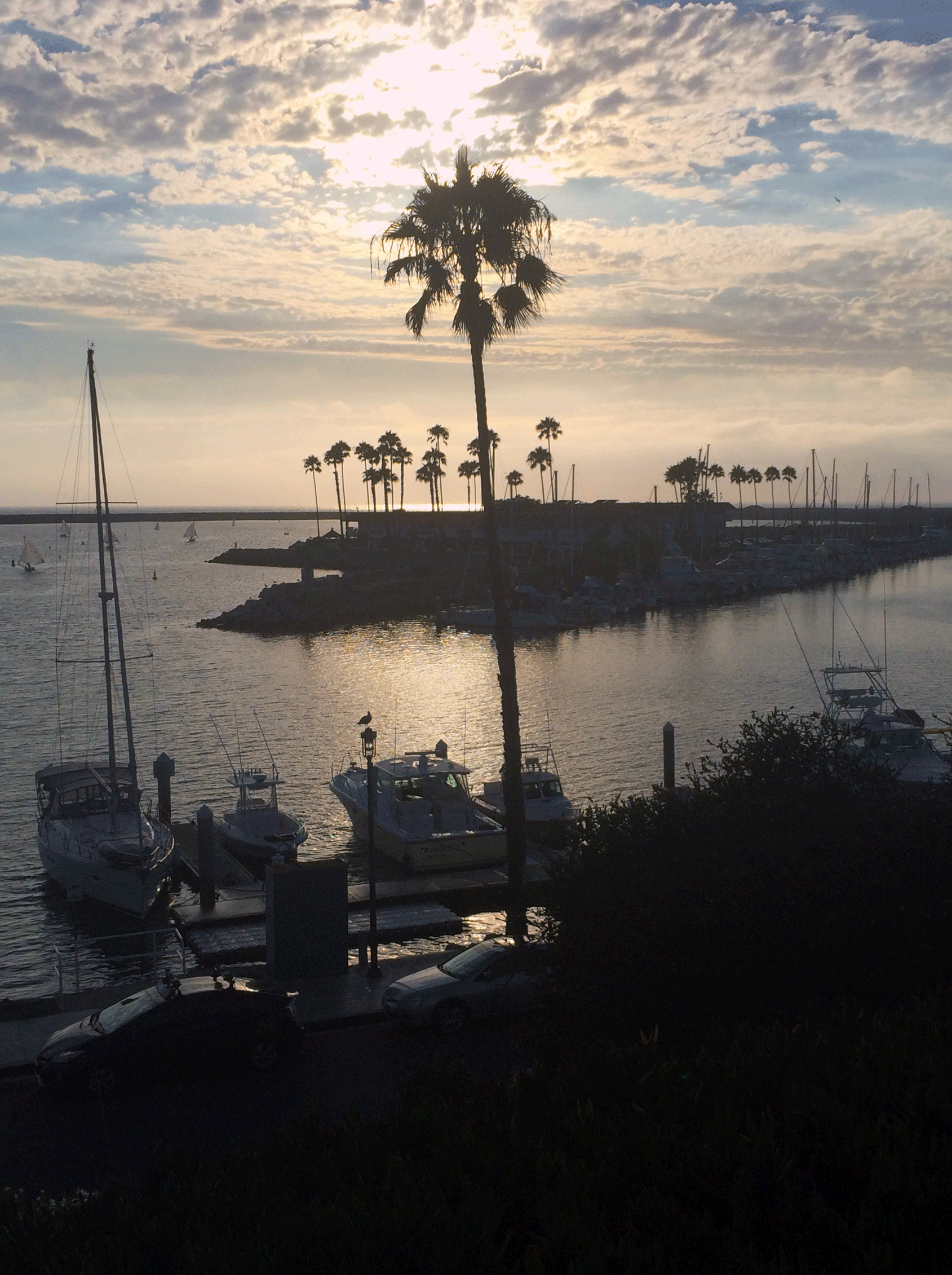 It was a mad dash, but I immediately forgot my hasty makeup job and unkempt do (couldn’t find my hairspray) the moment we arrived.
The hospitality and graciousness of Lt. Gen. David Berger and Mrs. Berger was just unforgettable. They are two of the most kind and down-to-earth people I’ve ever met, and really know how to take care of their guests. Enjoying dinner in their backyard overlooking the marina was the perfect way to end the day.
To close out MCEF, we attended the Marine Recruit Graduation Ceremony. It was honestly one of the most beautiful, emotional and memorable experiences for all of us. These recruits are so young and so strong — it was very inspiring to watch this small part of their monumental journey.
Overall, I learned a ton from my experience and made some awesome friends along the way. For me, the stereotype of cold, stern and unfriendly military brass was completely shattered.
While highly trained and dedicated, members of the U.S. Marine Corps are regular people just like you and me. They are brothers, daughters, mothers and sons — and on base, they are like a close-knit family. It was truly an honor to be welcomed into that family for three days.

If you want to meet the brave men and women serving our country, come to Marine Week Phoenix, which is going on now. Check out free equipment displays, concerts, demonstrations and more — just CLICK HERE for the full schedule of downtown Marine Week happenings.