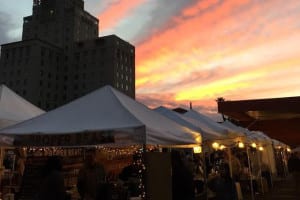 Imagine dining under the stars — a beer in one hand, the sun setting over the downtown skyline, and a bluegrass band or dance troupe performing in the background. Afterward, you walk away with fresh, local foods for breakfast or lunch the next day.
That’s what locals can experience at the new weekday market, Downtown Sundown, debuting Thursday, Sept. 24 at the Phoenix Public Market.
From 5 to 9 p.m., the public market grounds on Central Avenue and Pierce Street will transform into a local destination for dinner, drinks and entertainment in a unique, outdoor setting.
The Phoenix Public Market, which was founded in 2005, discontinued its weekly Wednesday farmers’ markets in May of this year, because the Wednesday market “was lacking a certain energy,” said Sara Matlin, the market manager.
By switching the event to Thursday — on the cusp of the weekend — and by focusing more on dinner and live entertainment, she said they want to create a more intimate and lively atmosphere. 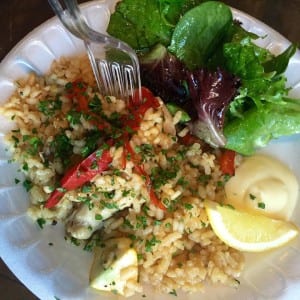 Patrons can enjoy drinks in the beer garden, more dining options than the previous Wednesday markets — like made-from-scratch paella from the Public Market Cafe, the unbelievably tasty burritos from Mi Catering, and fresh fry bread — as well as local entertainment, from bands to performance art.
In other words, this event is poised to become a favorite local hangout for dinner, drinks and appetizers, and groceries like bread, hummus, and produce.
The night was inspired by markets in other cities, where the sights, sounds, and smells of people preparing food in front of you really activate all of your senses and create a unique sense of place.
“It’s just a different atmosphere,” Matlin said. “(Phoenix has) fantastic restaurants and bars — and more and more opening — but an open-air market is just a totally different experience.”
While the event will be perfect for locals seeking nighttime entertainment, she said the market will be family-friendly, featuring pop-up park games like giant Connect Four and Jenga.
Food Truck Friday and the Saturday open-air markets will resume as usual, with Downtown Sundown aimed to become the local Thursday night hangout.
Don’t miss the first Downtown Sundown on Thursday, Sept. 24 from 5 to 9 p.m. at 14 E Pierce Street featuring local “punkgrass” band The Haymarket Squares.
We know you have instagram
#DTPHX