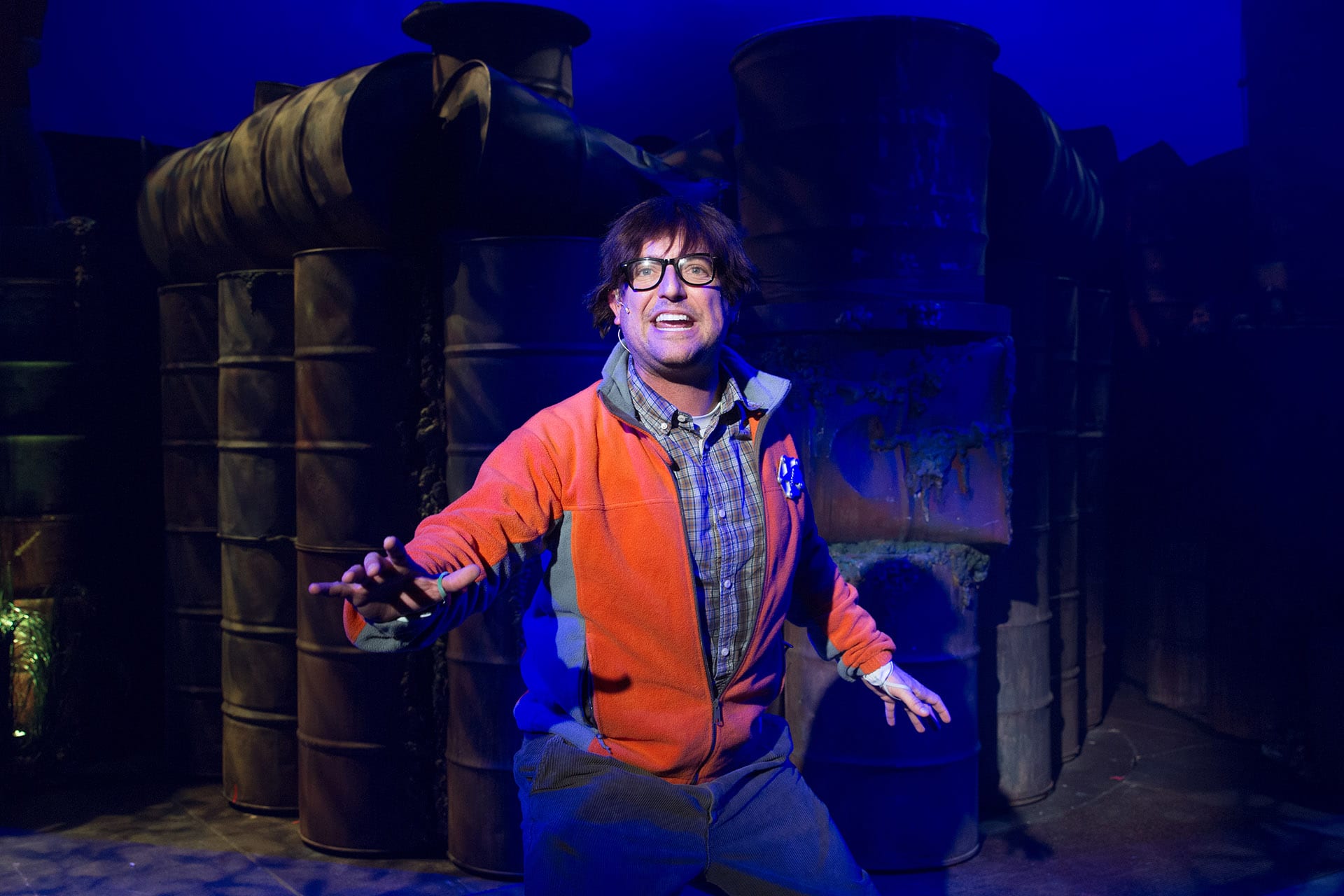 The lead role is played masterfully by Caleb Reese, a member of the popular local band “The Instant Classics.” (Photo: Phoenix Theatre)

“The Toxic Avenger” is an entertaining love story set in the city of Tromaville, N.J., located just off the New Jersey Turnpike. In this campy musical by Phoenix Theatre, Super-nerd Melvin Ferd the Third vows to save his city from the mountains of toxic waste mysteriously appearing in his hometown.
The lead role is played masterfully by Caleb Reese. Downtowners may recognize him as a member of the popular local band “The Instant Classics,” playing regularly at Copper Blues Rock Pub & Kitchen at CityScape Phoenix.
Whether he’s belting out big rock numbers or crooning the softer ballads — he keeps you rooting for the poor misunderstood hero the whole time.
In his quest to find the truth, Melvin meets love interest Sarah, a blind librarian, while doing research at the public library. After feeling Melvin’s nerdy face, blind Sarah quickly realizes she is not attracted to him romantically, but instead offers him the consolation of top secret information from the town’s archives (linking evil Mayor Babs Belgoody to the toxic waste debacle.)
Melvin heads to City Hall to confront the mayor, who is surprised by his discovery and exclaims, “Where did you get those papers? I buried them in the archives of the public library and then hired a blind librarian!”
After some quick talking, the mayor promises to change her ways and deputize the super nerd into her posse. When Melvin leaves her office, she sends her goons to “get the geek!” The roughnecks waste no time in locating and harassing Melvin and eventually drop him head first into a glowing drum of toxic waste, leaving him for dead.
The goons then harass poor Sarah, who collapses in fear. A giant roar can then be heard through the city as The Toxic Avenger — a transformed, oozing, stinking, deformed freak with a super hero physique — emerges out of a toxic fog, and proceeds to rip the goons to shreds. 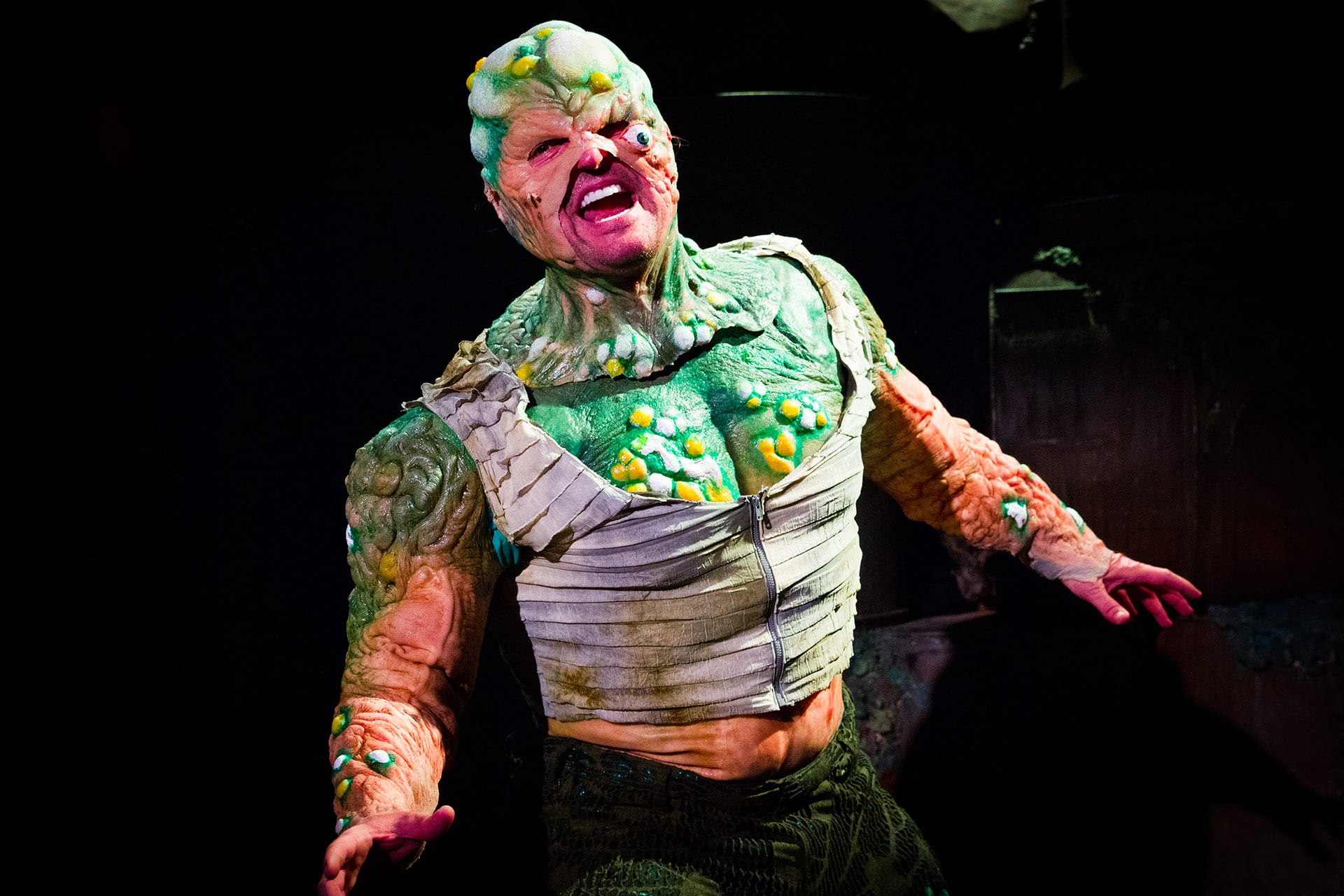 Reese makes the part of Melvin Ferd the Third and his alter ego “Toxie” relatable and likeable throughout the show. (Photo: Phoenix Theatre)

When blind Sarah wakes in her hero’s arms, The Toxic Avenger refuses to let Sarah feel his seeping, deformed face but agrees to let her feel his bulging pecs, and suddenly Sarah can’t resist his romantic charms. After confessing that he is toxic, Sarah gives him the nickname “Toxie.” Sarah falls in “hot toxic love” with the hard-bodied do-gooder. Toxie sets out to save Tromaville from the corrupt politics and toxic waste taking over the city.
The show’s set is comprised of a mountain of steel drums filled with percolating radio active waste. Atop the mountain, a live band is perched, providing the rock and roll soundtrack under the brilliant direction of Jeff Kennedy. The glowing toxic piles swivel around and open up to reveal different scenes during the show.
Trisha Hart Ditsworth’s talent is unmistakable in her portrayal of Toxie’s love interest, the blind librarian Sarah. Her voice is beautiful and her comedic timing is second-nature. Although most of the play is not politically correct, her character and apartment décor really push the envelope. She wears socks that don’t match, her artwork is hung sideways, she has a pool cue rack for walking canes, and her walls are covered in seeing eye dog-themed wallpaper.

Johanna Carlisle does double-duty in playing two characters, Melvin’s whiney mother and the evil Mayor of Tromaville. At the end of the first act the Mayor and Ma Ferd get into a fight during the song “Bitch/Slut/Liar/Whore.” This scene has the audience howling with laughter before intermission. Director Michael Barnard’s hilarious take on this scene supplies the most memorable moments of the evening.
The musical could’ve easily gone cheap and sleazy but it stays light and very funny. Phoenix Theatre has a deep talent pool and it shines in this production. Although the singing and dancing aren’t perfect, the obvious talent of every cast member make this a fun night out. Leave the kids at home though, this is an R-rated production with adult themes and language.  See the show now through November 22 in the new Hormel Theatre in the Phoenix Theatre complex, located adjacent to the Phoenix Art Museum.