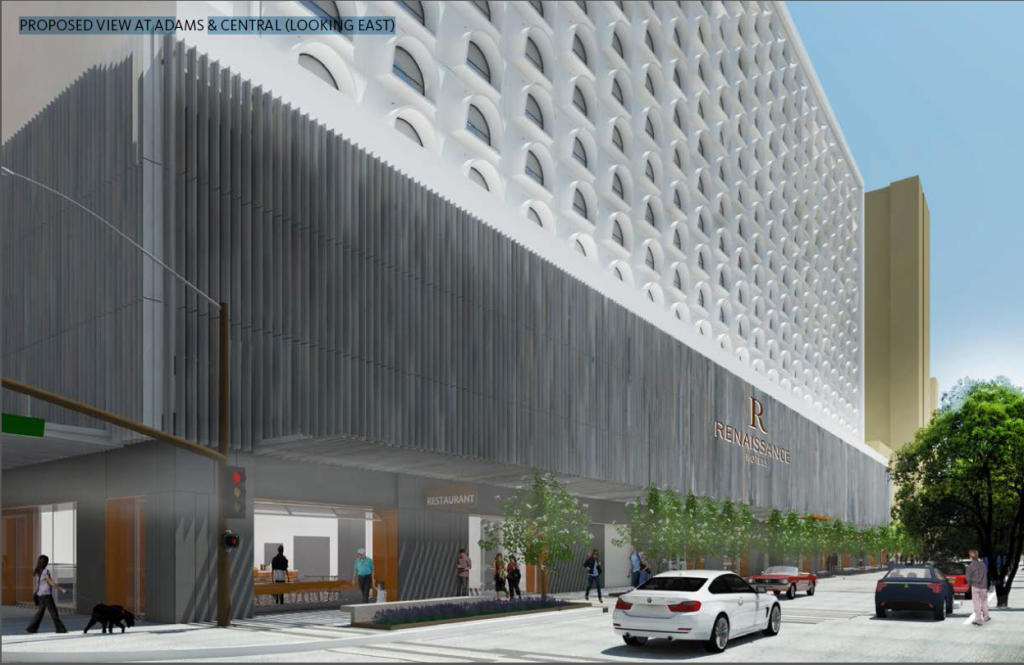 One of the busiest pedestrian walkways in Downtown Phoenix is about to undergo some seriously dramatic change.
Beginning in May, construction will begin on a $10 million activation project to enhance Adams Street (between Central Avenue and First Street) as well as to renovate the exterior and interior of the Renaissance Phoenix Downtown Hotel.
“We’re excited that we can help downtown continue to experience its renaissance,” said Jon Erickson, director of sales and marketing for Renaissance. “We’re hopeful that people will see this as an investment in the city as much as it’s an investment in the hotel.”
These improvements were prompted by the Adams Street Activation Study commissioned by the City of Phoenix in 2012 and conducted by Gensler, a national architecture and design firm with offices in Downtown Phoenix.
After three months of outreach to property owners, businesses and community members — Gensler developed conceptual planning strategies to revitalize the prominent pedestrian corridor between Second Street and Central Avenue. Those included everything from new retail, restaurants and patios to enhanced shade and art installations.
“It’s not a great pedestrian experience — that was one of the big things that came out of the planning process,” said Beth Harmon-Vaughan, managing director and principal at Gensler. “There’s a lack of plantings and shade and places to sit.”
But Renaissance owner Steven Cohn — a longtime downtown supporter — is doing his part to make the project materialize.
Without using one cent of public funds, the hotel is moving forward with Gensler’s key findings. Changes include moving the hotel’s main entrance and car drop-off to First Street; expanding patio dining options; and adding new sidewalks, retail shops, shade structures, landscaping and benches.
“This was not an easy thing for (Cohn) to do. This is a private initiative stepping up to do this for downtown,” Harmon-Vaughan said. “Hopefully this creates some impetus to get other people on that street to come forward and do something similar.”
Adams Street is seen as especially important, as it’s the welcome mat to the city connecting the convention center to the light rail, hotels and all of downtown. 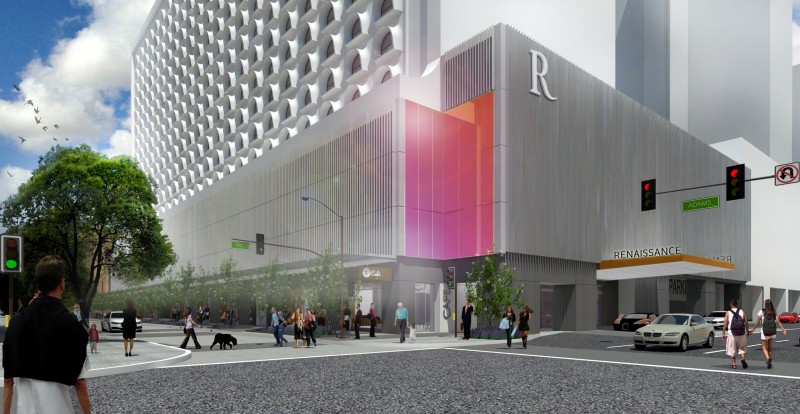 However, the two-block stretch is also unique in that its landscaping and streetscape are managed by Downtown Phoenix Inc. (DPI).
Ray Cabrera, DPI’s director of placemaking, said the organization is working with Renaissance to look at new street lights, trees and other plantings that could be incorporated going forward.
“We’re trying to show that we can partner with people to make the whole plan a reality — not just one block,” Cabrera said.
Of course, the renovations will also add some new flair to an already iconic building.
Ditching the tans and browns, the hotel’s exterior will be repainted shades of white or gray. The presently stucco facade will be outfitted with aluminum fins (pictured) that will hover over the expanded sidewalk, providing a shady respite for passersby.
And for those who fancy people watching, there’ll be plenty of that too.
Plans for additional food and drink concepts — like a coffee shop on the southeast corner, a new restaurant and grill (wood-burning), and an expanded lounge and bar — feature large garage doors that open up to the sidewalk and street. 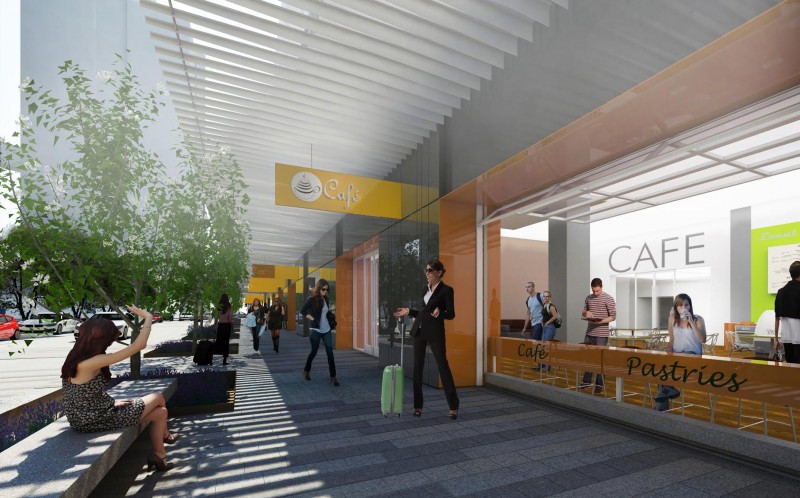 Erickson said the interior is also getting a major redesign, with a more open floor plan and modern, Southwest-inspired decor.
Outside, the street will also be built-out to make hosting special events a much simpler task: the sidewalk and street will be more even, new bollards will make street closures easier and decorative pavers will add some extra pizzazz. Construction is expected to wrap up in January 2017.
All in all, the exterior and interior modifications will make Adams Street a more welcome and pedestrian-friendly space — not just for hotel guests but for the entire downtown community.
“We do this stuff because we believe in what is happening in downtown,” Erickson said. “However small our part is in the redevelopment of downtown, we’ve got a part in it.”
Renderings courtesy of Renaissance Phoenix Downtown Hotel.