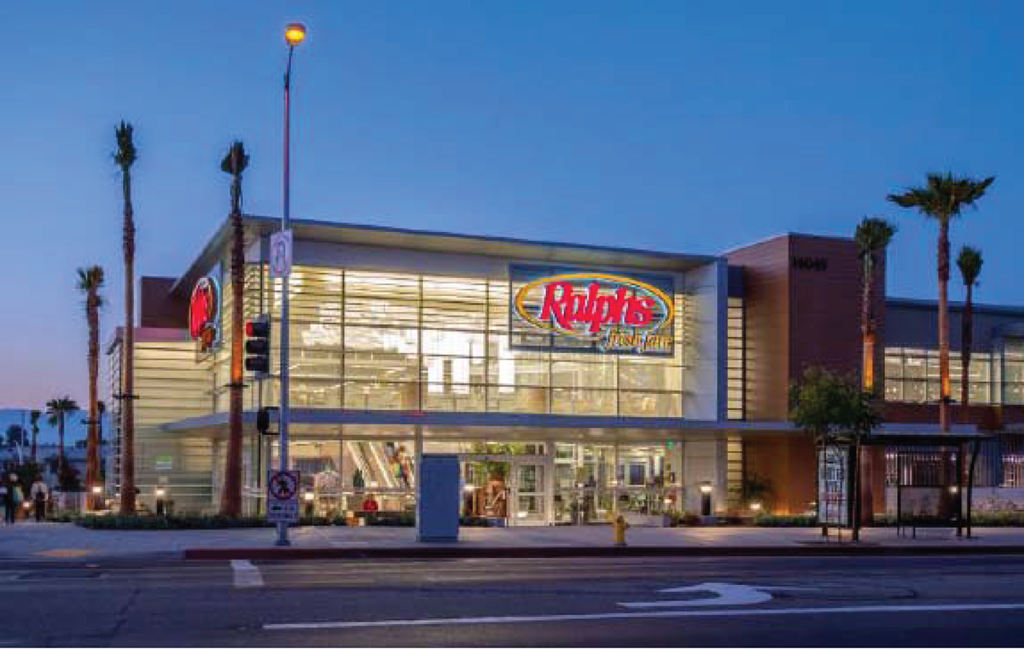 Both Fry’s and RED Development are drawing inspiration and lessons learned from urban markets around the U.S., including the Ralph’s grocery store in Los Angeles. (Image: RED Development)

By the end of 2019, Downtown Phoenix will have what office workers, residents and businesses have long asked for: an urban grocery store. That, and so much more.
The project is being headed up by RED Development, which built CityScape Phoenix in 2010.
The Fry’s Foods store is just one part of a larger mixed-use project, which will feature a high-rise residential and a mid-rise office tower on a lot that has been stagnant for 25 years.
Officially and colloquially known as Block 23 — the site area spans Washington to Jefferson streets, First to Second streets, and is well known for hosting the Super Bowl fan activities in 2015.
Despite what some of have speculated, this isn’t going to be some big box store.
The grocery store will anchor the corner of First Street and Jefferson at the base of the above parking structure, atop of which will reside creative office space (think open floor plans and high ceilings). Retail and restaurant storefronts will line Washington, First and Second streets.

RED’s vision for the project is to create an open and inviting facade. Jeff Moloznik, vice president of RED Development, emphasized that they want to create an authentic urban experience with active ground floor and retail/restaurant space.
Unlike the CityScape site, he said this block has fewer constraints and limitations, granting them the ability to utilize all four sides of the block.
Architectural renderings have not yet been finalized as RED is still in the planning stages of the development, including meeting with community leaders to solicit feedback and insight. However, Moloznik did hint that they’re paying close attention to the street-level experience and looking forward to having full creative control over the project.
“When I say high density, we’re literally building from property line to property line on this thing,” he said. “It will be completely four-sided architecture.”
Dan Klocke, executive director of the Downtown Phoenix Partnership, applauded RED Development for its focus on creating an interesting street-level experience, not only for the grocery store facade but the entire site.
Instead of being walled off, Moloznik described the exterior of the Fry’s as a glass cube. At night, the place will light up, during the day passersby will get to watch the glass elevators go up and down.
“They’re really thinking through how to make the ground floor as interesting as possible,” Klocke said, “and that’s really important to keeping the urban fabric strong and tight.”
In addition to contributing to the overall walkability of downtown — the project will fulfill a dire need for fresh food. Downtown Phoenix is labeled a food desert, or an area where residents have poor access to affordable and healthy food.
“One thing about this that people lose sight of is we have very poor grocery services in the area south and east of downtown,” said David Krietor, president and CEO of Downtown Phoenix Inc. (DPI). “Those neighborhoods are going to get a full-service grocery store that they haven’t had in who knows how many years.”
Building an Urban Grocery Store (in Phoenix) is No Easy Feat
The development seems to have become a bit of a passion project for Moloznik.
The costs and complexities of securing downtown’s first grocery have been never-ending and challenging, though not impossible to overcome.
That’s because, unlike a suburban store, the build-out is more intricate and expensive — including the steel and concrete construction, above-ground parking garage, commercial elevators, fire stairs and loading docks. Fry’s even agreed to put their back-of-house kitchen, butcher and bakery underground, which gave RED Development extra space to put more retail at the street level. 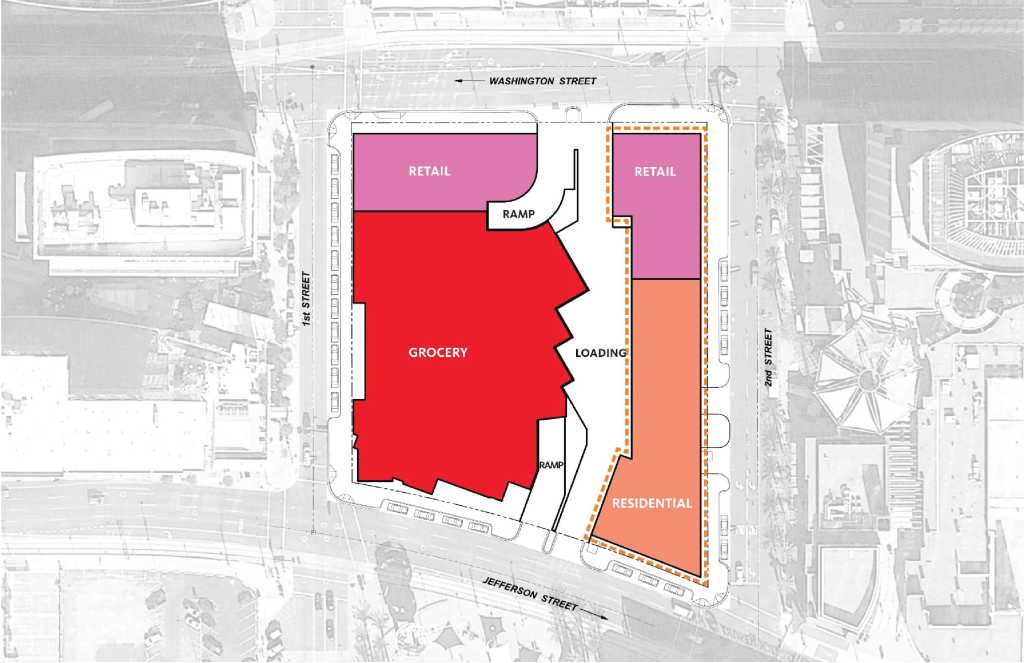 It is three times more expensive to build, and according to Moloznik, it will cost Fry’s more to operate at this location than its other stores.
And without any other grocery stores in downtown to compare numbers with, Fry’s has turned to its groceries in similar downtown areas in other cities.
But according to Dan Klocke, if anyone has the ability to realize this project, it’s RED Development.
“The fact that they built CityScape during the worst recession since the Great Depression — people don’t realize how impossible that was,” he said. “I give them a lot of credit, because I don’t see anyone else running down here to do it.”
Next Steps
RED Development is tirelessly working to get the project moving. They’ve been touring other stores around the country, including stores in urban parts of Los Angeles and Denver.
Before construction can begin, an archaeological excavation must occur. But don’t worry — that process is routine and won’t delay the opening date, as they’ve already built it into the timeline.
For Moloznik, and Fry’s Foods, they want to open as soon as possible, by the end of 2018 to be exact.
“Everybody has expressed an interest and a desire to have a grocery store downtown,” Moloznik said, “and I don’t think we’d have one if it wasn’t for that drumbeat.”
We know you have Instagram
#DTPHX
Make holiday shopping a fun, less stressful ordeal