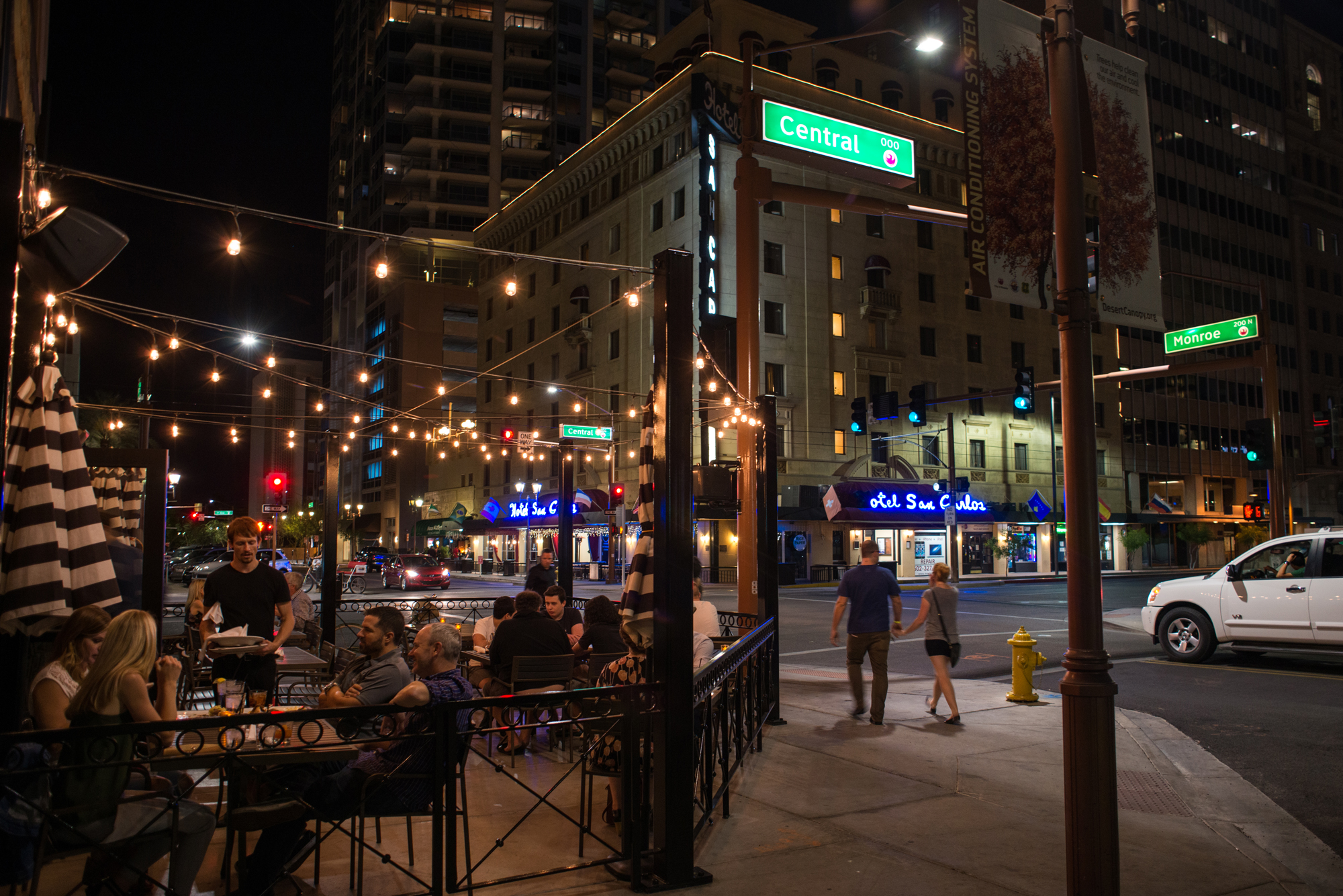 The sound of the wind rustling in the trees, a waft of something delicious, the clink of glasses, a smile from a stranger — all of these micro-experiences knit together a larger picture that defines the culture of a city, what people think about it, what they remember, and what they love.
That’s why improving the sidewalk experience is just one of many steps Downtown Phoenix Inc. (DPI) is taking toward cultivating a better downtown.
“The number one thing about any great downtown is that it’s walkable,” said Dan Klocke, executive director of the Downtown Phoenix Partnership, an affiliate of DPI. “Through events, through streetscape improvements and through filling ground-floor spaces, we think we can create a really special, walkable, interesting and fun downtown.”
Through a new initiative launched in January, DPI began allocating additional funding and manpower toward a series of streetscape improvements, a retail matchmaking program and sidewalk activation through events. Working toward a walkable downtown has always been a priority for DPI, but right now the timing is critical, according to Klocke.
With approximately 2,000 housing units currently under construction, equating to 5,000 new residents in the next three years — focusing on the things large and small that people interact with at the street level will be well worth the long-term investment, he said.
Since the beginning of 2016, DPI has replanted 67 shade trees, worked with 75 potential retailers and sponsored dozens of events, helping to bring more than 100 days of activity to downtown streets so far this year.
And that’s just the beginning.
The Field Services Team is also expanding — in both personnel and scope. Collectively in 2015, the Downtown Phoenix Ambassadors and Streetscape Team removed more than 34,000 pounds of trash from public areas, led more than 1,800 walking tours, helped more than 18,000 people find a restaurant, gave out thousands of maps, assisted the homeless and the list goes on. 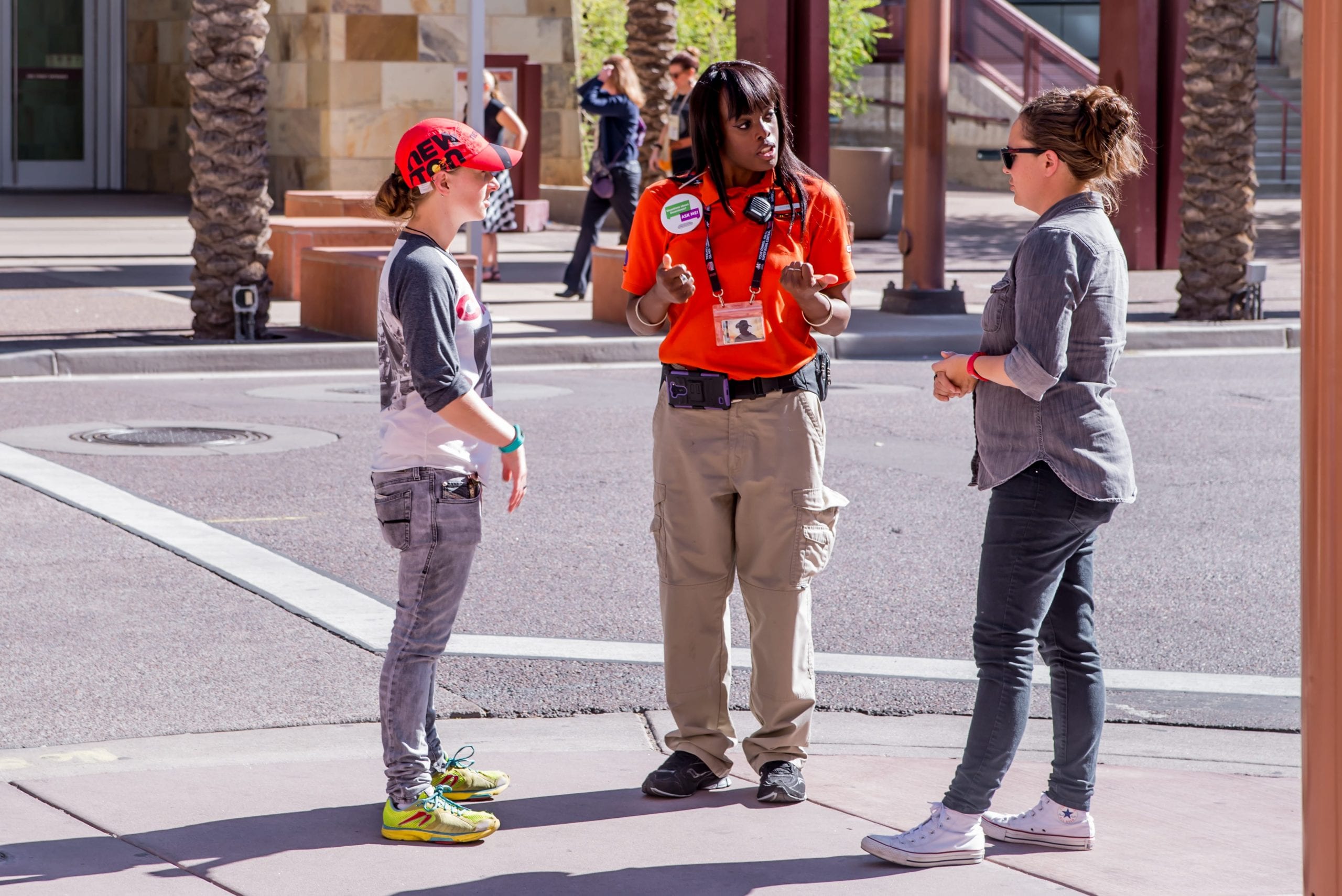 This year, that impact is expected to be even greater.
“Whether you’re a tourist, whether you’re somebody that works down here, or just comes down here for entertainment, it’s important that you’ve got things to stimulate your senses and things that are going to add to your experience like trees, like shade, like art — like people,” said Guy Engard, a Downtown Phoenix Ambassador.
So what is meant by “walkable?” Walkable urban development is characterized by density, mixed-use real estate and access to multiple transportation options such as bus, light rail or bike routes, according a report released in June by LOCUS, in conjunction with the Center for Real Estate and Urban Analysis at the George Washington University School of Business.
In simple terms, everyday destinations need to be within walking distance. The biggest challenges in Downtown Phoenix are shade, filling ground-floor retail, connectivity between hubs, and having art and other interesting things to look at along the way.
In the new walkability report, titled “Foot Traffic Ahead,” Phoenix is currently ranked 29 out of 30 metropolitan areas surveyed for walkability — a low ranking based on historically car-centric, suburban development.
But perhaps more interesting than where it is now, is looking at where it’s going.
The report placed Phoenix number 2 out of 30 in its “Future Ranking,” an index based on how walkable or sprawling future development is likely to be. The report cited the introduction of light rail, “successful revitalization efforts in downtown and Tempe,” in addition to an uptick in urban office absorption as major contributors.
This projection is not necessarily surprising to someone like Jim “Opa” Schoch, a Downtown Phoenix Ambassador and CityScape resident since 2014.
“The most fun places to walk are neighborhoods and downtown, to me, is becoming a neighborhood,” he said.
Attitudes are changing, people are gravitating toward an urban lifestyle and DPI is trying to capture that momentum, according to Klocke.
“We want to take these next few years to aggressively try to improve that experience along the sidewalk,” he said. “It’s not something that’s going to happen overnight, it’s going to be a gradual, methodical process. But I think we can do it.”