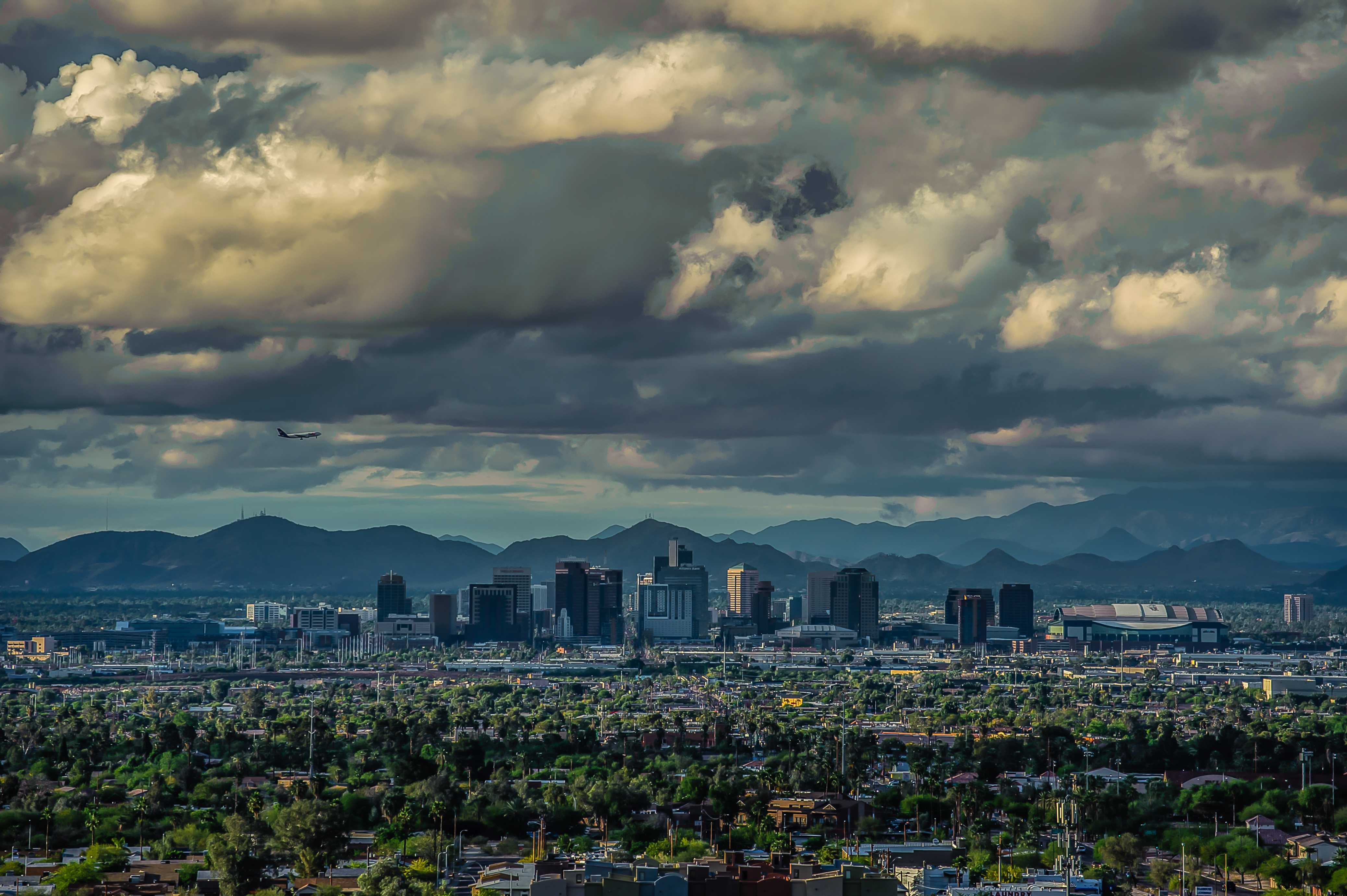 Phoenix is one of five cities chosen as a pit stop on the Rise of the Rest western road tour, where local startups will pitch for a $100,000 investment prize. (Photo: Brandon Gray)

Nearly 78 percent of all U.S. venture capital investments get funneled into just three states: New York, California and Massachusetts.
But tech star and billionaire Steve Case aims to change all that.
Two years ago, the AOL co-founder and current CEO of Revolution – a Washington D.C.-based venture capital firm — started Rise of the Rest Road Trip, a nationwide bus tour in search of talented entrepreneurs in emerging startup ecosystems.
On Friday, Oct. 7, Case and the Revolution team will roll into Downtown Phoenix, where they’ll tour growing startups, meet local policy makers, engage with the business community, and hear from eight local companies looking to win a $100,000 investment prize.
“In total, 80 cities were nominated and Phoenix had the most nominations of any city,” said Anna Mason, director of Rise of the Rest Investments. “We started to reach out to people on the ground and the more we got connected and got to know the ecosystem, the more we realized how closely everyone works together.” 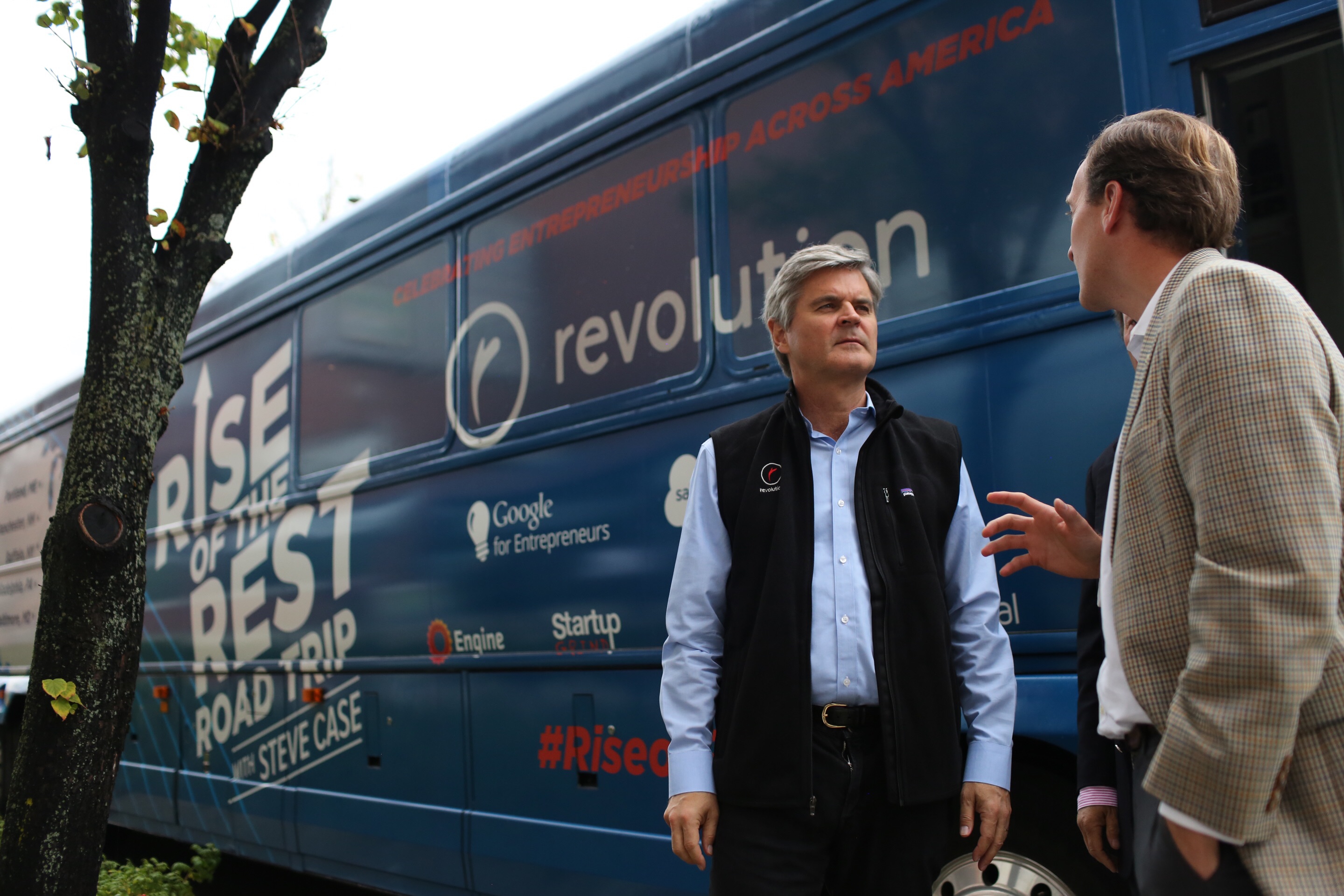 Steve Case (left) started the Rise of the Rest bus tour to showcase companies with the potential to start and scale anywhere, not just in a few coastal cities. (Photo: Revolution)

Mason cited the #yesphx movement, StartupAZ Foundation, Arizona State University and a host of other public and private organizations that are working collaboratively to put Phoenix on the map for innovation.
So what makes Phoenix an emerging startup ecosystem? According to a recent report by the “New York Times,” the low cost of living, a talented workforce and high quality of life have all been key factors in enticing tech companies and facilitating the growth of successful startups.
Since launching the tour two and a half years ago, Revolution has visited 19 cities and invested $2 million in local startups. This will be the first tour out West, stopping off in Omaha/Lincoln, Denver, Salt Lake City/Provo, Albuquerque and ending in Phoenix.
“It’s a sign of maturity,” said Nicole Pasteur, a policy advisor for Phoenix Mayor Greg Stanton. “I think we’re being put into a class of cities that are ripe for investors to pay more attention to.”
The number of applications has increased every single tour and more than 100 Phoenix-area companies applied to pitch for $100,000, which is more than any city.
According to Mason, this is really about the rise of the rest of the cities outside Silicon Valley, New York City and Boston. And Phoenix has a lot to offer.
“There’s extraordinary talent evenly dispersed across the entire country, but right now the distribution of venture capital that gets invested is very unevenly distributed,” she said.
When the Revolution team arrives and the national spotlight is on Phoenix, the community is invited to join in and celebrate local startups. Located at The Duce in downtown’s Warehouse District, the Rise of the Rest events on October 7 are free and open to the public. Space is limited, so RSVP is encouraged.

Fireside Chat with Steve Case / 3 p.m. / The Duce / Free
Case will talk about the challenges and opportunities facing entrepreneurs, the Rise of the Rest concept, and why this is the best time to start and scale a business in Arizona.
Startup Pitch Competition / 4 p.m. / The Duce / Free
Four-minute pitches in front of Case and a panel of all-star judges. The eight local finalists are: Ava School Solutions, CBL Worldwide II, Inc., Crowd Mics Inc., Hopscratch, MSDx, NeoLight, ReplyBuy and SMART Brain Aging, Inc. Each will be vying for the $100,000 investment prize.
Happy Hour with Steve Case / 6 p.m. / The Duce / Free
A networking party for entrepreneurs, investors and all other members of the Phoenix entrepreneurial ecosystem.