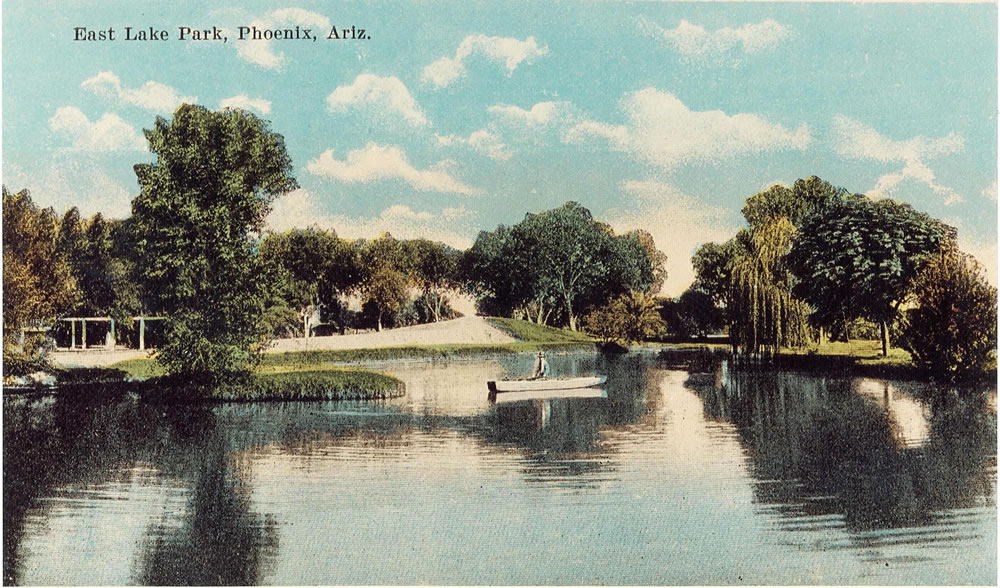 An early postcard depicting the man-made lake that once existed at Eastlake Park near Downtown Phoenix. (Photo: City of Phoenix)

Some landmarks represent more than just a significant geographic location. They hold a sense of place, history and the very heartbeat of a community. This much is true for Eastlake Park.

Located at 1549 E. Jefferson St., it’s the oldest park in the city, dating back to the 1890s. It was purchased by the City of Phoenix in 1914 and the man-made lake became one of the park’s most interesting aspects. In addition to offering the novelty of a boat ride in the desert, it even harbored a few alligators, according to reports.

Eventually, the lake was replaced by baseball fields and a swimming pool. But for those who live here, it’s more than just a recreation area. Eastlake Park, and the surrounding neighborhood of the same name, developed into the epicenter of African American life in Phoenix. For the past 100 years, the park offered everything from dances and baseball games to lectures and civil rights events.

The neighborhood that grew up around it was just as important. The majority of Phoenix’s small but robust African American community settled in this area east of Downtown Phoenix after 1900, with other pockets south of the Warehouse District and west near the Capitol.

Former Phoenix City Council member Calvin C. Goode has lived here for more than 60 years, and watched the area transform over the decades.

“It’s a good neighborhood in my judgment,” he said. “All three of our sons grew up here.”

Across the street from Goode’s tax accounting business, Booker T. Washington spoke at the Great Emancipation Jubilee in 1911. A couple blocks down the street, Dr. Martin Luther King Jr. visited the Tanner Chapel AME Church in 1964.

Beginning in the teens and ramping up in the 1940s, Eastlake Park became a cross-generational hub for civil rights activities — and that continues today. Annually, the park hosts Martin Luther King Jr. Day events, the Valley of the Sun Juneteenth celebration and even Black Lives Matter rallies.

“It’s one of those historical, cultural areas and spaces that can never be replaced or replicated,” Matthew Whitaker said, a Mesa-based diversity, equity and inclusion consultant. “It’s a cornerstone of not only the African American community, but it’s become a cornerstone of our cultural community.”

Preserving Eastlake Park remains a priority for the City of Phoenix, according to Councilwoman Kate Gallego, who represents District 8 where the neighborhood is located. In addition to light rail lines along Washington and Jefferson streets, a $4 million renovation to the park in 2013 helped upgrade the entire facility.

“Eastlake Park is not only a central place in the African American community,” she said, “but it also provides a critical recreational resource to a diverse and vibrant neighborhood.”

Historically, this is the area where people established predominantly African American churches, hotels, businesses and bought homes. There was a drive by early settlers to create a community with a unique cultural identity.

But segregation also played a role in keeping African Americans from moving elsewhere.

First introduced by the territorial government in 1909, school segregation was mandated by Arizona law until 1954. A series of informal property restrictions also prevented non-whites from purchasing or renting homes north of Van Buren Street.

Realtors wouldn’t sell to African Americans, banks refused loans, and by the late 1930s, the condition of homes and lack of affordable housing south of Van Buren Street was a serious issue.

According to a City of Phoenix historic property survey, most African Americans rented rather than owned homes by 1940, which was a major reversal from just a few decades earlier.

“I’m a graduate of Carver High School, which is at 415 E. Grant St.,” he said, “and for many years, that was the only high school you could attend.”

After graduating in 1945, Goode received both his bachelor’s and master’s degrees from Arizona State University. He served on the City Council for 22 years, the longest tenured council member in Phoenix history, and retired from the Phoenix Union High School District after 30 years.

As a civil servant and community activist, Goode played a pivotal role in securing many improvements for minorities, particularly in south Phoenix. During his time on City Council from 1972 to 1994, he advocated for equal employment opportunities, job training, early childhood education, and introduced a program to ensure that small businesses owned by women and minorities would receive a proportionate share of city business.

“I know we’re the best country in the world,” he said. “But we’re also a country that still has problems in the way they treat certain minorities.” 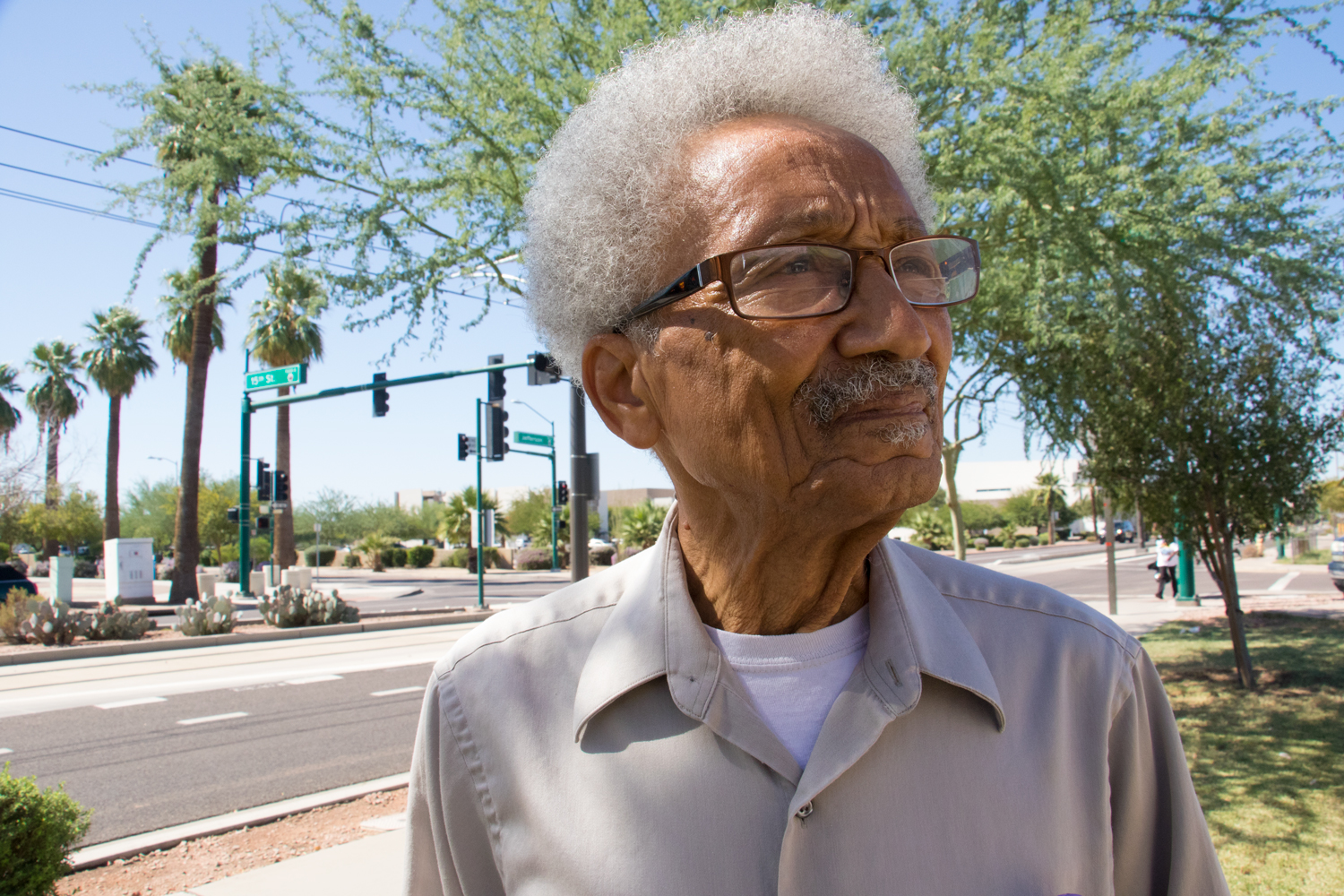 Calvin C. Goode stands outside his home/office on the corner of Jackson and 15th streets in the heart of the Eastlake Park Neighborhood. (Photo: Fara Illich)

Goode with his wife Georgie, who passed away in 2015, purchased a salmon-colored duplex on Jefferson Street across the street from Eastlake Park in 1955.

At 90 years old, he still helps run Calvin Goode & Associates, located in one-half of the duplex, and keeps the family home on the other.

The Eastlake Park Neighborhood is fairly small, bounded by Van Buren Street to the north and the Union Pacific Railroad to the south, spanning from 12th to 16th streets.

With new apartments cropping up in the neighborhood and the ongoing development boom in nearby Downtown Phoenix, Goode worries about lower income minority families, and whether there will continue to be a place for them in Eastlake.

“I’m advocating from 12th to 16th street, that we provide more affordable housing,” he said. “There are no longer deed restrictions excluding African Americans, but certainly the pattern is that we still have problems in terms of where you can live — sometimes it’s economic and sometimes it’s just pure discrimination.”

Gallego echoed similar concerns for her district. While many of the changes to the area have been positive, including access to transportation and bringing in quality jobs, she stressed the need for economic balance.

“It’s a delicate balance that I can’t promise we’ll always get 100 percent right.” she said. “But I can promise to always work in good faith with neighbors and residents to make every Phoenix neighborhood the best it can possibly be.”

The demographics of the area have changed over the years, but the park itself continues to be a place where African American children, teens, adults and seniors from across the Valley can attend free community events, sports programs, low-cost athletic classes and more.

African Americans have always wanted to gather and create their own cultural spaces, according to Whitaker, and Eastlake is one of those sacred spaces that still exists.

“Every community has something like an Eastlake Park and I think that’s why it’s so critical,” he said. “Even when African Americans moved out of the city into the suburbs and other municipalities, we always went back. I can’t imagine African American history and life without Eastlake Park.”