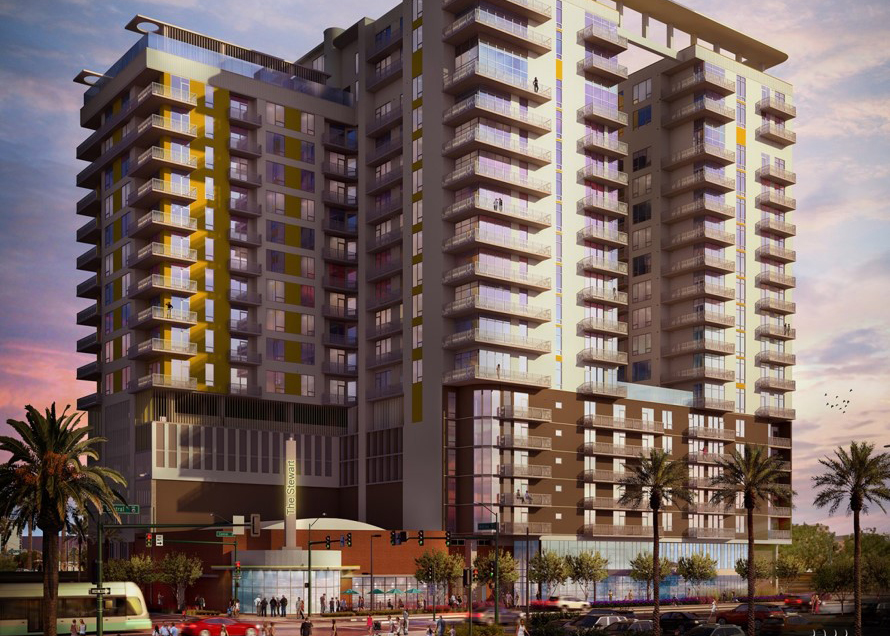 In the course of designing a building, sometimes a bit of opposition yields more thoughtful and interesting results in the long run.
This is true for the Circles building, according to Brian Cassidy, president of CCBG Architects, Inc., the design firm behind The Stewart — a new 19-story high rise apartment in Downtown Phoenix.
The project adaptively reuses the showroom of a historic car dealership, the 1947 Stewart Motor Co., more recently known as Circles Discs and Tapes. It features 312 one- and two-bedroom units and 9,000 square feet of retail on the ground floor.
“The shapes are reminiscent of the original building with soft, streamlined, sweeping curves,” Cassidy said. “We’re still playing with the final colors, we won’t know for a few more months, but we hope it will be a lively, interesting building.”
When Aspirant Development hired CCBG in 2015 to do a feasibility study on the property at Central Avenue and McKinley Street, the vision of a dense, transit-oriented development started to take shape. But not without some hiccups first.
Over the past two years, the project underwent many months of design and redesign, some hotly-contested community meetings over historic preservation, the preemptive partial demolition of the Stewart Motor Co. building, and the eventual loss of a major city tax break. But Aspirant, the developer behind The Stewart, pushed forward.
After moving ahead with traditional financing last spring, The Stewart is expected to open in December.
Using decades of experience in adaptive reuse projects, CCBG channeled the thoughts and frustrations of the community into a final design that opens to the sidewalk, preserves the existing old-growth trees along Central Avenue, and attempts to balance 1940s architecture with a luxury apartment tower — all on three-quarters of an acre.
“Instead of an empty building, we’ll have a good sustainable project that will bring more people into this area, which has been the missing ingredient for the last 20 years — getting more people to live and work downtown,” he said.
In an area booming with residential development — including more than 2,000 units under construction — The Stewart stands out as one of the only high rise apartments in the Roosevelt Row area. For that reason, it’s also one of the most sustainable.
According to Cassidy’s calculations, an apartment at The Stewart uses about 1 percent of the physical footprint of a new-build, single-family detached home of the same size. High rise infill means no new streets, alleys or sidewalks, with minimal upgrades and extensions of electric lines, water lines and gas services.
One of his favorite comparisons is between garage doors. The Stewart has two garage doors along the alley. A subdivision with 300 new homes could potentially have 5,900 linear feet of garage doors.
“From a sustainability standpoint, high rise downtown construction makes so much sense,” said Dan Klocke, executive director of the Downtown Phoenix Partnership. “Because you often walk or take transit instead of drive, you use a ton less water, because you have significantly less landscaping, you use a lot less energy because you don’t have as much surface area to lose cooling and heat — it’s emissions, it’s maintenance cost, it’s energy, it’s water, it’s all of that.”
The Stewart isn’t CCBG’s first adaptive reuse project. In fact, the company just completed the redevelop of a warehouse at 411 S. First Street, and redevelopment of a building at 402 S. First Street (across the street) is about to begin. Both buildings in the Warehouse District are owned by Aspirant.
Over the years, CCBG has worked on more than 10 high-profile historic buildings throughout downtown.
But unlike other redevelopment projects, Cassidy is excited about all the people, specifically the density, that this project will bring, potentially spurring office redevelopment in the area, and creating a good mix of places to live and work.
“This next generation of housing signals a healthy urban housing momentum,” he said. “When you see bigger, taller buildings being built, it just means a more interesting, more vibrant community.”
For a live look at progress on The Stewart, you can check out the webcam here.