In December 2018, the Phoenix City Council postponed its vote on a proposal to renovate Talking Stick Resort Arena in Downtown Phoenix, barring more public input. The arena is owned by the City of Phoenix and its residents, which is why the public’s approval of a new agreement with the Phoenix Suns (who currently operate and maintain the building), is so important.
City Council will review and potentially vote on the new deal Jan. 23, but before then, there will be a series of meetings to gather input.
These meetings will provide information on the proposed agreement, which would keep the Suns downtown until at least 2037, and includes $230 million in arena renovations.

Know before you go:

• Since opening in 1992, Talking Stick Resort Arena has hosted more than 40 million guests for professional sports games, concerts, family shows, and more – with an annual direct economic impact of $182 million to the City, county and state, according to the City.
• The building’s infrastructure is now 26 years old and basic things like the roof, plumbing, electrical and mechanical equipment need to be replaced. The City of Phoenix owns the arena and is obligated to repair it.
• Over the years, the Suns have paid over $300 million in operating expenses, which include capital improvements; rent to the City for use of the building; daily operation, show bookings and maintenance – which would continue until at least 2037 under the proposed agreement.
• For the arena to continue operation, some renovations will need to be made whether the anchor tenant (Phoenix Suns, who pay rent to the City) contributes to the project or not.
• Under the proposed agreement, the City’s investment in renovations is capped at $150 million – the Suns will pay $80 million up front, plus all overages.
• The City’s portion is paid from the Sports Facilities Fund, comprised of taxes from rental cars and hotel rooms – funded primarily by tourists instead of local taxpayers.
• Even if the arena is not renovated for basketball, the City will need to pay millions to renovate its property, to support concerts and other major events. 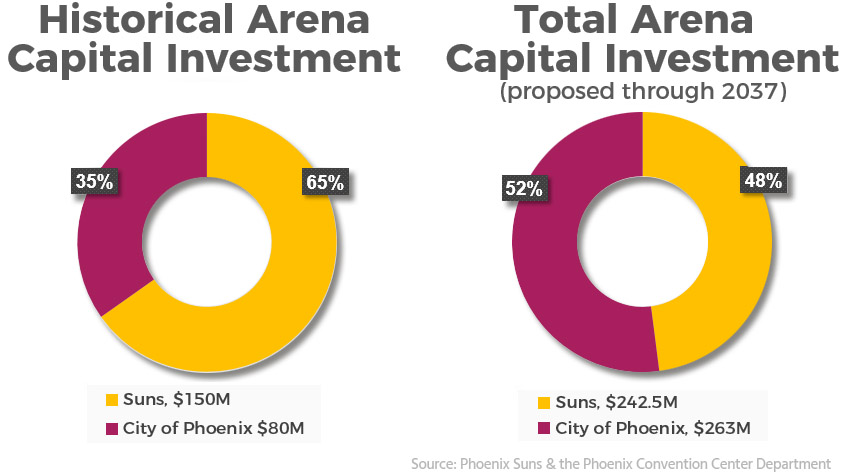