Urban Wine Walk Postponed: But We Can Still Support the Bars and Restaurants We Love 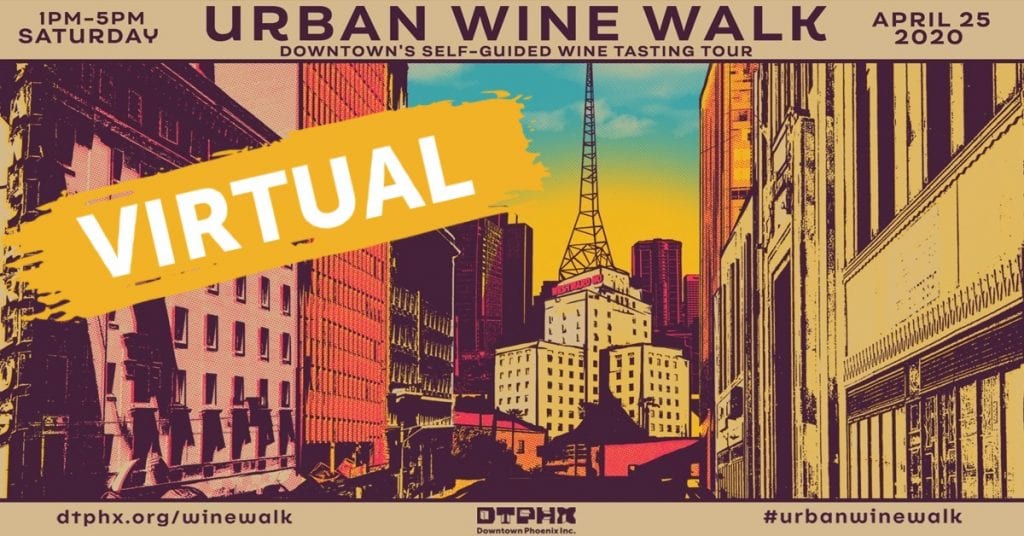 Urban Wine Walk was devised as a strategy to showcase an evolving Downtown and give bars and restaurants a boost in sales as well as an opportunity to develop a relationship with new customers. There weren’t as many events happening in Downtown at that time so we picked a Saturday afternoon in April, created a bread crumb trail along the then-new light rail line and invited people to come re-discover Downtown Phoenix. And the people came. They came for wallet-friendly wine samples and complimentary snacks. They came to experience something new. And better yet, they brought their friends.

Soon Downtown would really take flight. The economy improved. More bars and restaurants opened Downtown (Downtown would add more than 100 net new restaurants by 2018). The residential movement was resuscitated. Students flocked to Downtown. So did tech companies. The Warehouse District was ignited. The intersection of Roosevelt and Third streets became the most densely populated intersection in the entire state.

Through all the growth and change and challenges, Urban Wine Walk was a constant. And it will remain a constant.

Saturday, April 25 was supposed to mark the 10th anniversary of Downtown’s spring tradition. We were excited. Restaurants were excited. Attendees were REALLY excited (more than 10,000 people were engaged with the event’s Facebook page). People were reaching out to get their hands on the beautiful posters (designed by legendary Hamster Labs) months before the event.

Then you know what happened.

While we can’t host Urban Wine Walk in its traditional form (not yet, anyway), we can still support the bars and restaurants we love at a time when they need it more than ever. On Saturday, April 25, we encourage you to host your own Urban Wine Walk, virtually. Buy a glass (or better yet a bottle) of wine and a delicious snack from your favorite downtown restaurant and join us in a toast as we keep each other safe by staying home. Share a photo of your toast while tagging @downtownphoenix and using the hashtag #VirtualWineWalk and we’ll reward some of our favorite submissions with a special treat.

We’ll get through this together and together we’ll rise to wine walk again soon.

You can find participating businesses and virtual programming throughout the event on the Urban Wine Walk Facebook event.