With their twin sons in tow, Andy and Tyler Fontes ride bikes through one Phoenix’s rainbow crosswalks at Roosevelt and Portland streets. Much of Phoenix’s LGBTQ+ history is centered around the Roosevelt Row area, and while some of the buildings may be gone, the memories will last a lifetime. (Photo: Jill Richards)

June is LGBTQ+ Pride ​M​onth to commemorate the Stone​wall​ riots back in 1969. The rebellion started after New York City police raided the Stonewall Inn during the early hours of June 28, an LGBTQ+ club in Greenwich Village – igniting subsequent riots and protest.

Though not the first LGBTQ​+ uprising, it’s recognized as the start of the LGBTQ+​ c​ivil​ rights movement. These events happened because the marginalized LGBTQ+ ​community was fed up with the harassment. Arizona was not exempt from these life-altering persecutions and arrest​s. 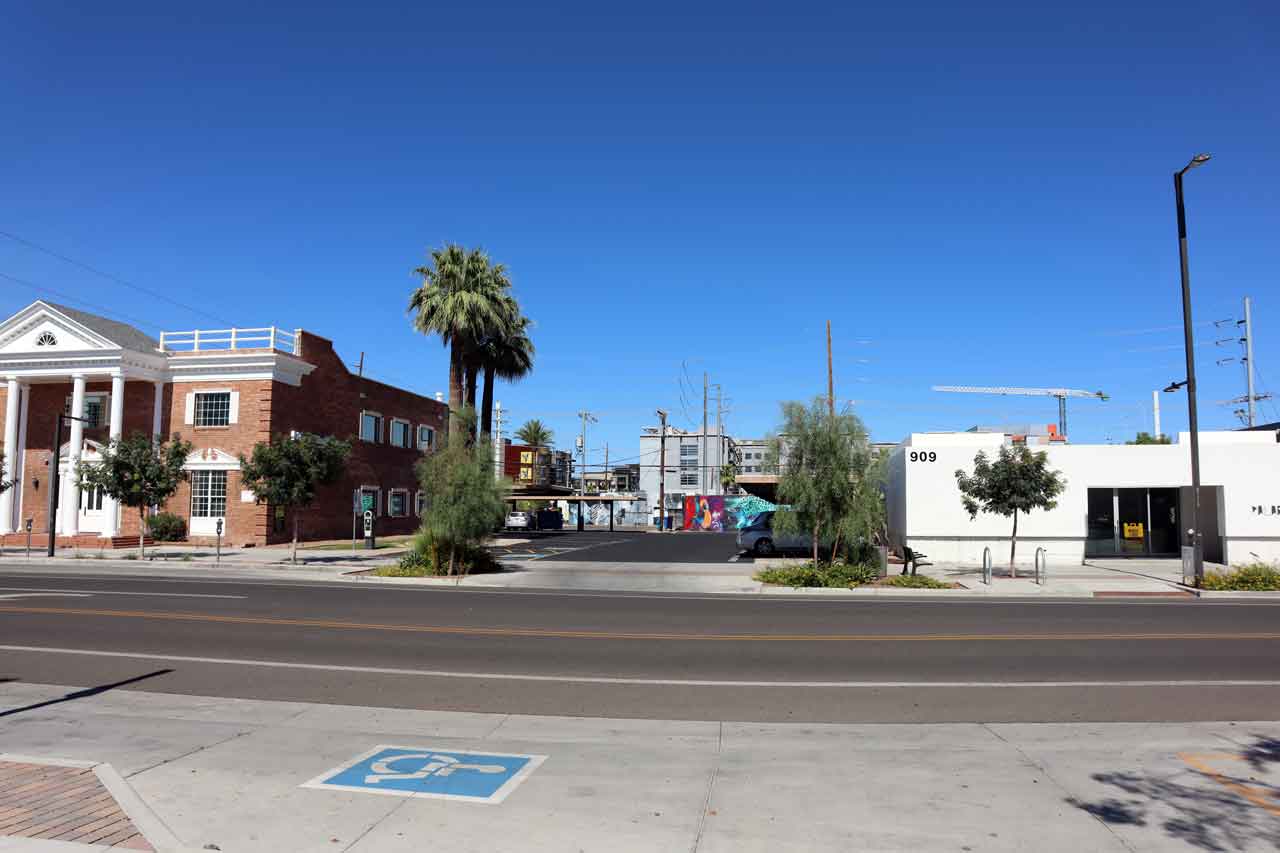 The Eighth Day Coffee House raid wasn’t a unique event. During the ’60s and ’70s, it was part of a legitimized and concerted effort on the part of Phoenix Police to seek out and arrest members of the LGBTQ+ community. (Photo: Marshall Shore)

This empty lot was once the location of the Eighth Day Coffee House. Early on a Sunday morning in 1964, a dozen officers raided this LGBTQ+ social club arresting ​more than 20 people​, with charges ranging from lewd and lascivious acts to drunk and disorderly conduct. Their names were printed in the newspaper​, jobs were lost, families ​and careers ruined. 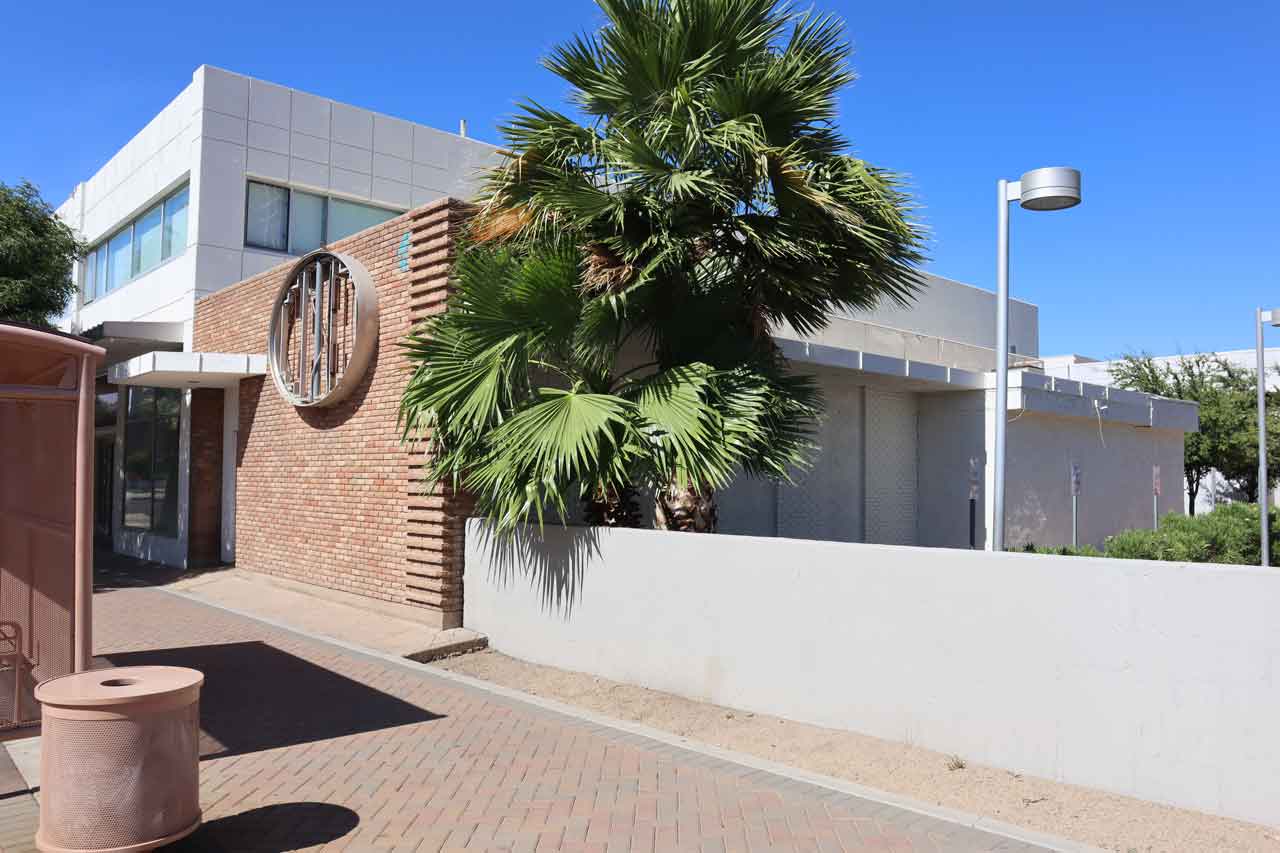 An LGBTQ+ bar, Cruisin’ 7th (now located on Seventh Street) used to be called Cruisin’ Central. It opened in 1977 in this spot just north of Roosevelt Street and Central Avenue (the location is still unoccupied). The bar moved to its current location in 2003. (Photo: Marshall Shore)

Cruisin’ Central opened ​its​ door in 1977. The alley behind the building was the main entrance into the bar that attracted a diverse clientele.

Hip Historian Fun Fact: In 1​999, Monica Helms designed the Transgender Pride Flag at her central Phoenix home near Indian School Road and Third Avenue. It has since been used and adopted around the globe. 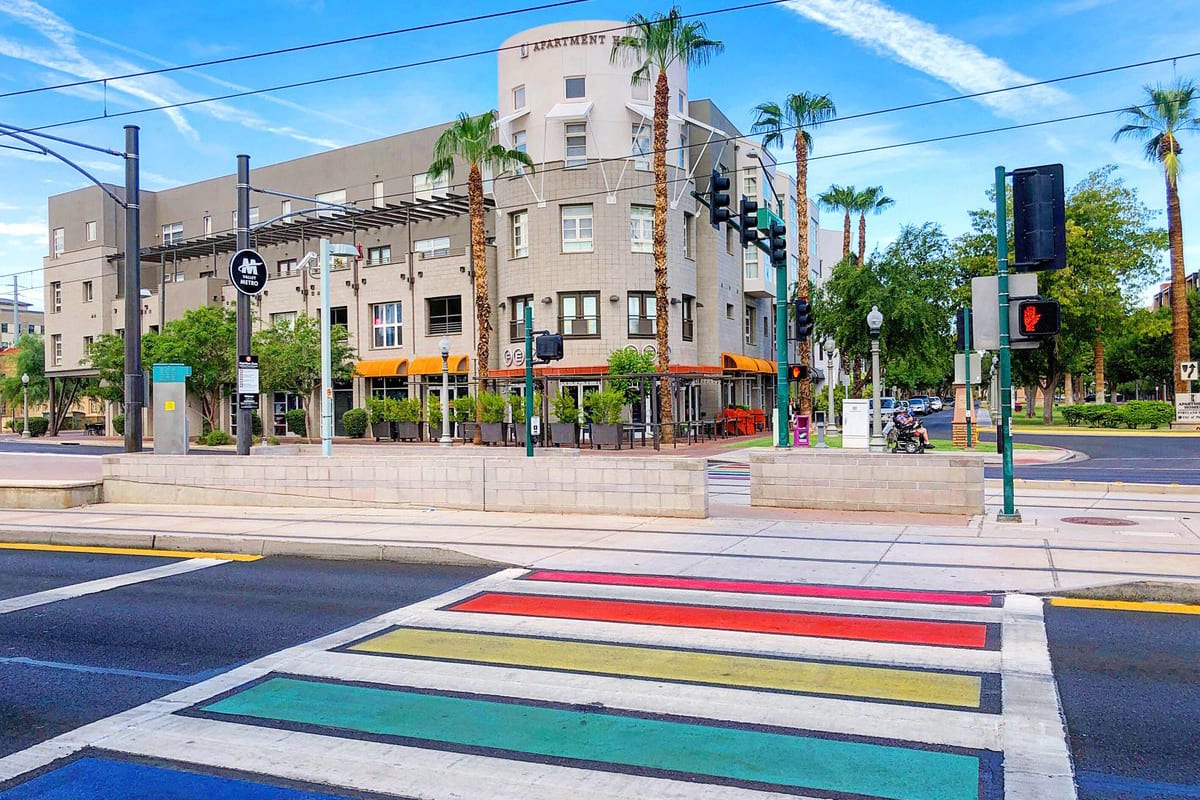 Unveiled the ​summer of 2018, and one of two in Phoenix, the effort was organized by Phoenix Pride and other LGBTQ+ non-profits. It highlights the history of Roose​velt as the first Phoenix gayborhood​, and to this day, the neighborhood is home to One-N-Ten, Aunt Rita’s Foundation, the​ Parsons Center for Health and Wellness, Southwest Center for HIV/AIDS​ and several other LGBTQ+ friendly organizations. 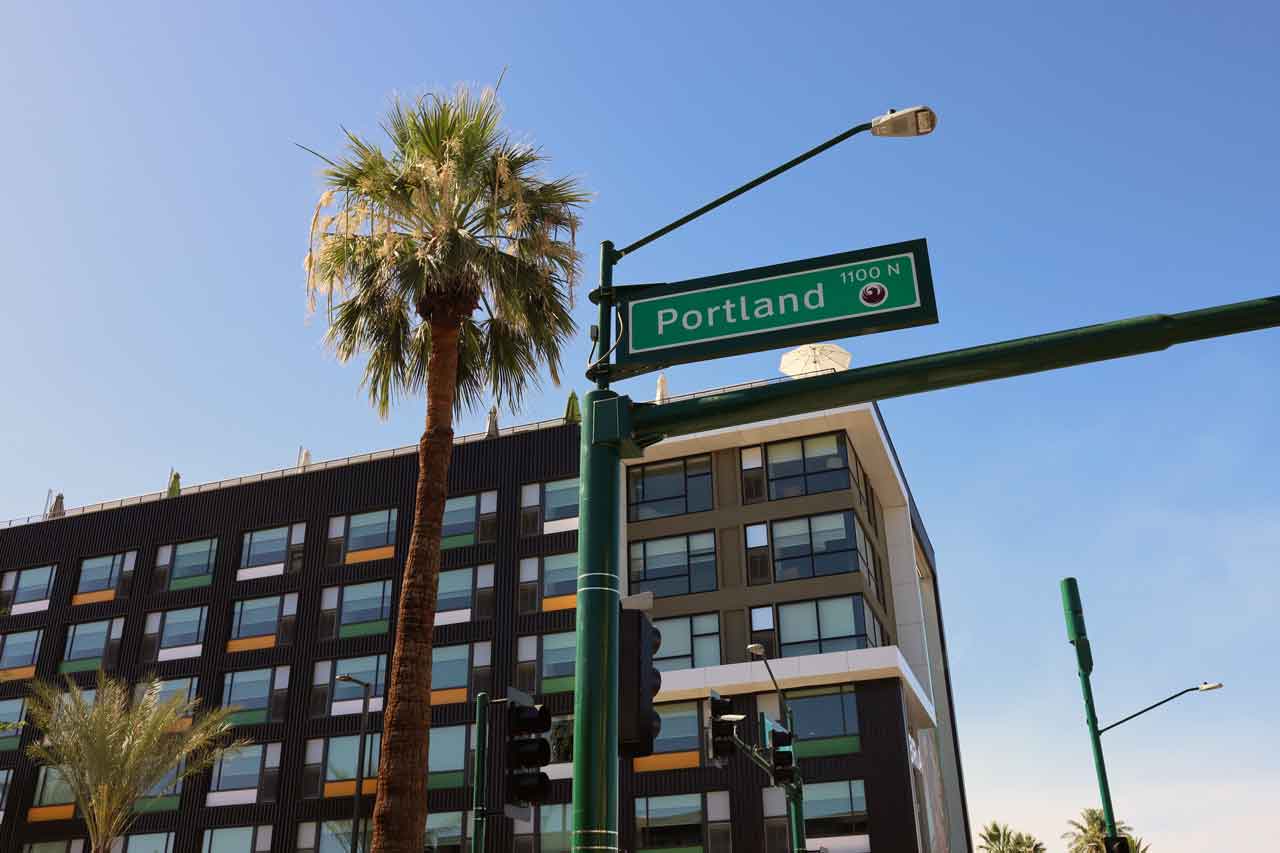 A circuit of gay bars, drag clubs, and LGBTQ+ inclusive spaces along Roosevelt and Portland streets came to be known as “The Fruit Loop,” an area steeped in colorful queer history. (Photo: Marshall Shore)

A circuit encompassing Roosevelt, Third, Portland and First streets, “The Fruit Loop” was a popular place for men looking for male companionship​, and​ was active from the mid-40s to the mid-90s​. 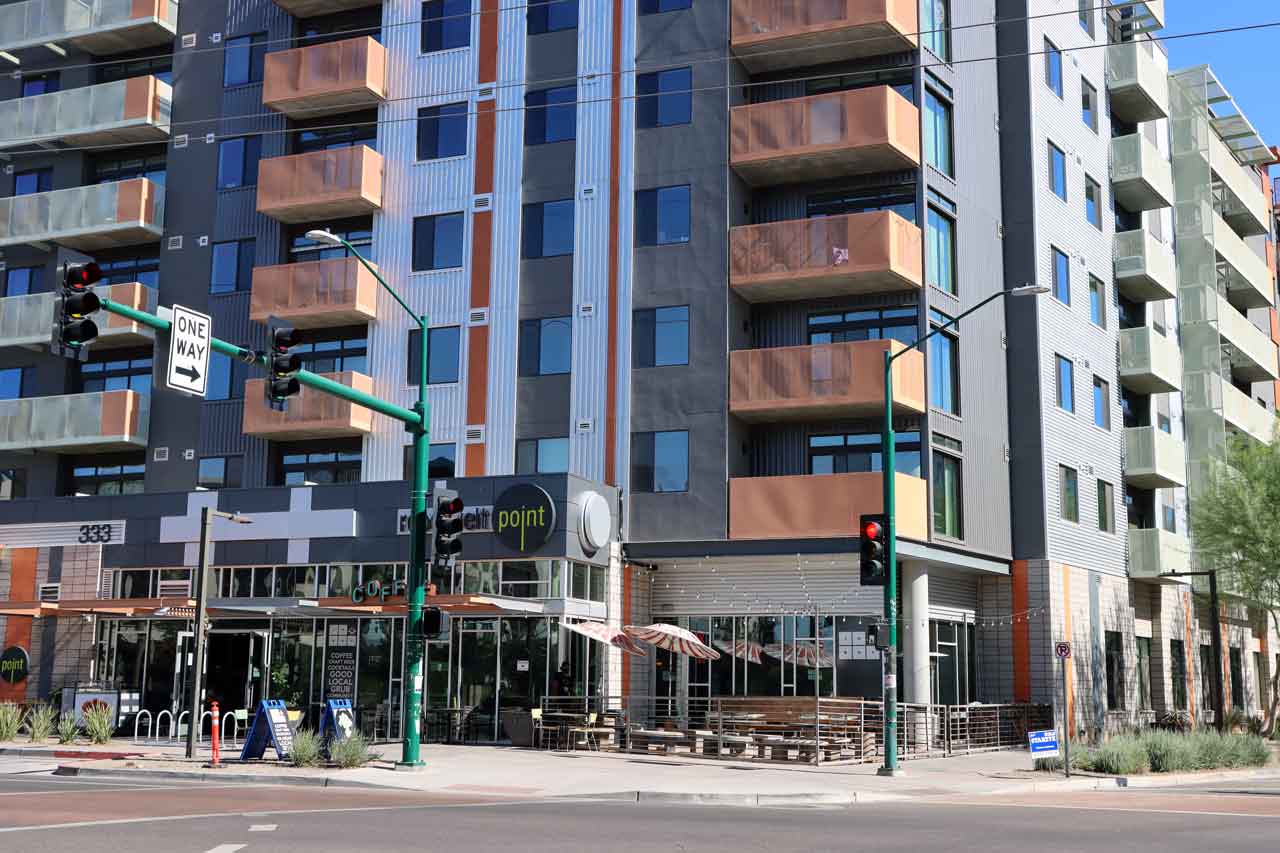 The original site of the 307 Lounge, it is now Roosevelt Point apartments. (Photo: Marshall Shore)

The 307 Lounge opened in the ‘40s, but a fire in the early ‘50s forced it to close and relocate down the street. 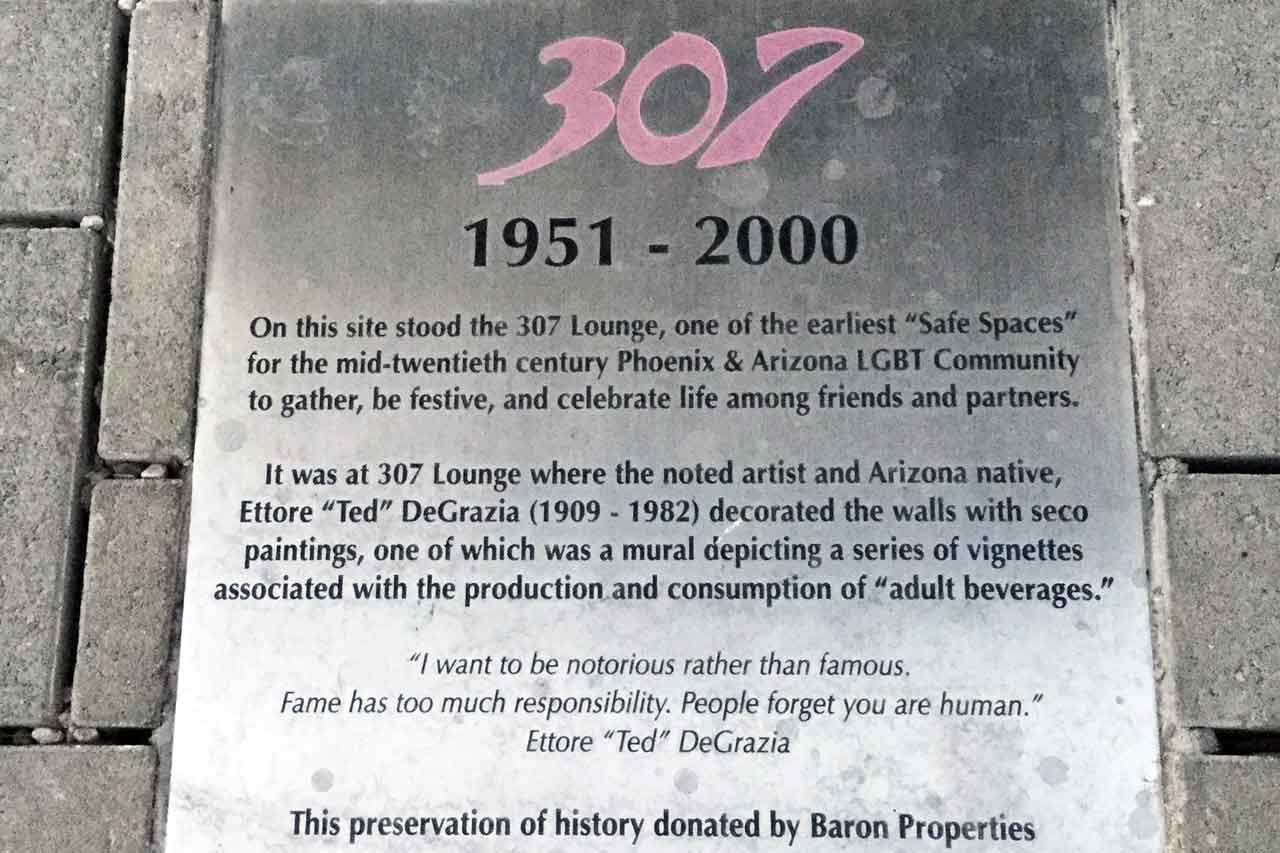 Formerly the Greenhaus Gallery + Boutique and home to famous DeGrazia murals, Lauren Lee’s “Three Birds” mural, and a place of LGBTQ+ historical significance as the 307 Lounge, the building was razed in 2016. It is now Ilumniate Apartments. (Photo: Marshall Shore)

The 307 name stuck through the decades and several owners. Look down at the plaque commemorating the 307 for being a watering hole on The Loop. The building was also famous for several DeGrazia murals, painted early in his career during the ‘50s. After the building was purchased for redevelopment, the DeGrazia Museum came from Tucson to preserve a small mural. Sadly it crumbled, and all were lost with the demolition of the building. ​

The 307 Lounge drag performers used a separate, small brick building on the west side of the alley as their dressing room, which is now home to The Dressing Room restaurant. (Photo: Marshall Shore)

Across the alley is a restaurant called the Dressing Room. The 307 was a small bar and lacked a dress room. Beginning in the early​ ‘70’s, it began hosting regular drag shows. The performers would use this space as their dressing room, running through the alley, and bursting in the side door to perform.

A few entertainers still performing around town appeared on the 307 stage: Pussy Le Hoot, Barbara Seville and Celia Put​ty. Walk down the alley and find the 20-foot tall dress form covered in 10,000 LED lights named Tish. It commemorates Tish Tanner, a larger-than-life drag performer at the 307.

Click here to conduct the LGBTQ+ History Tour of DTPHX on your computer or smart phone.