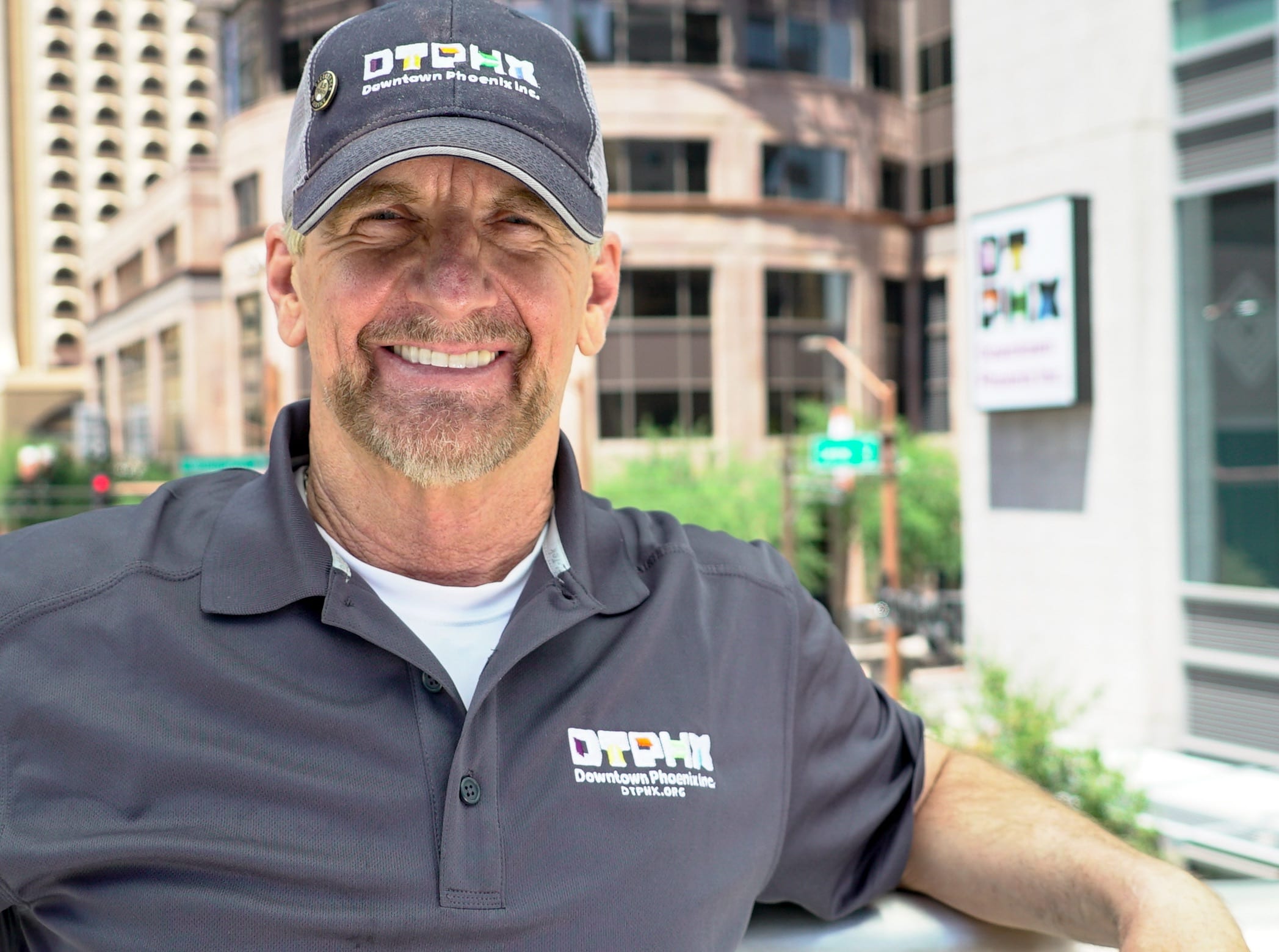 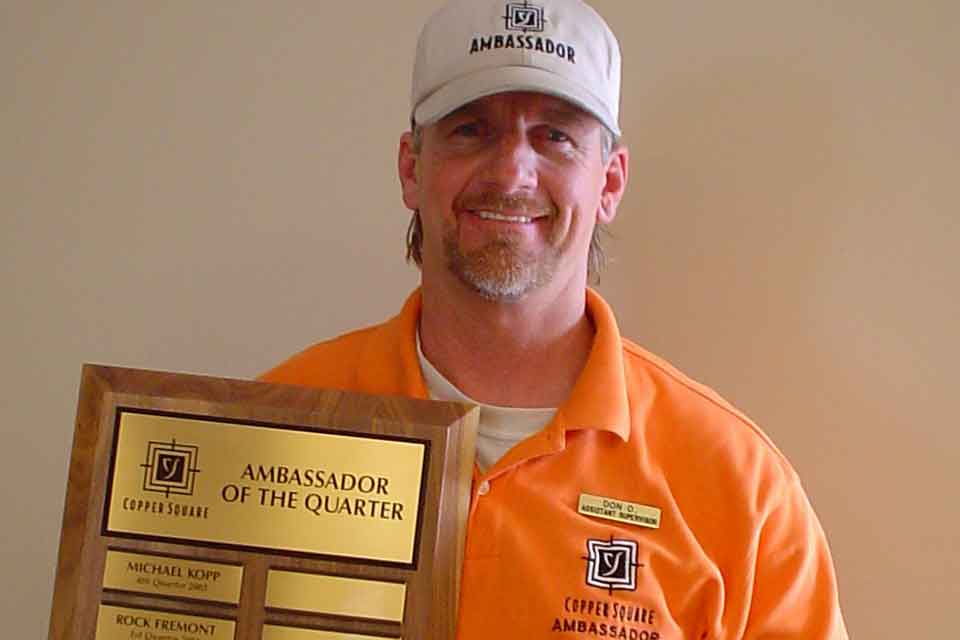 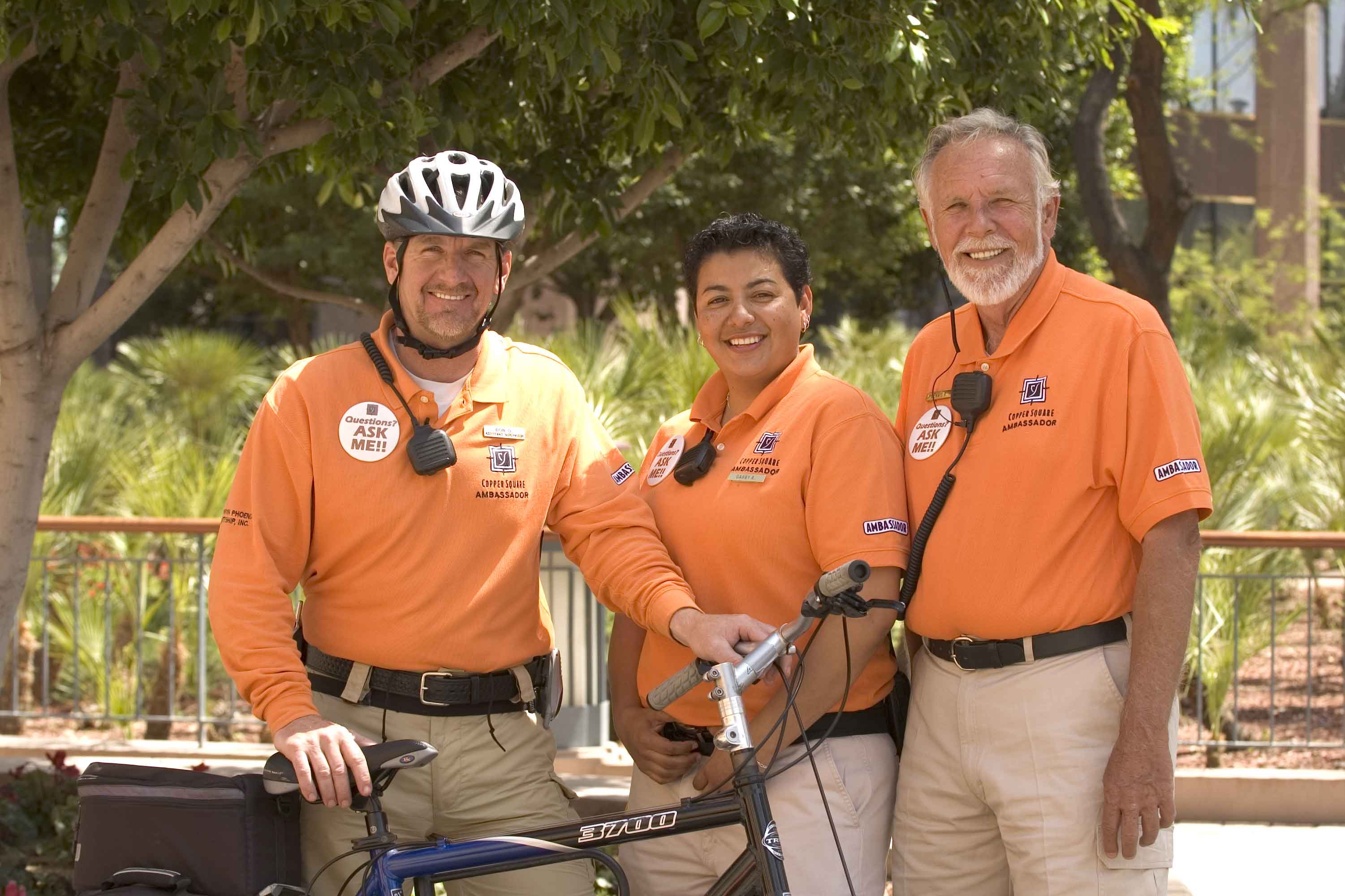 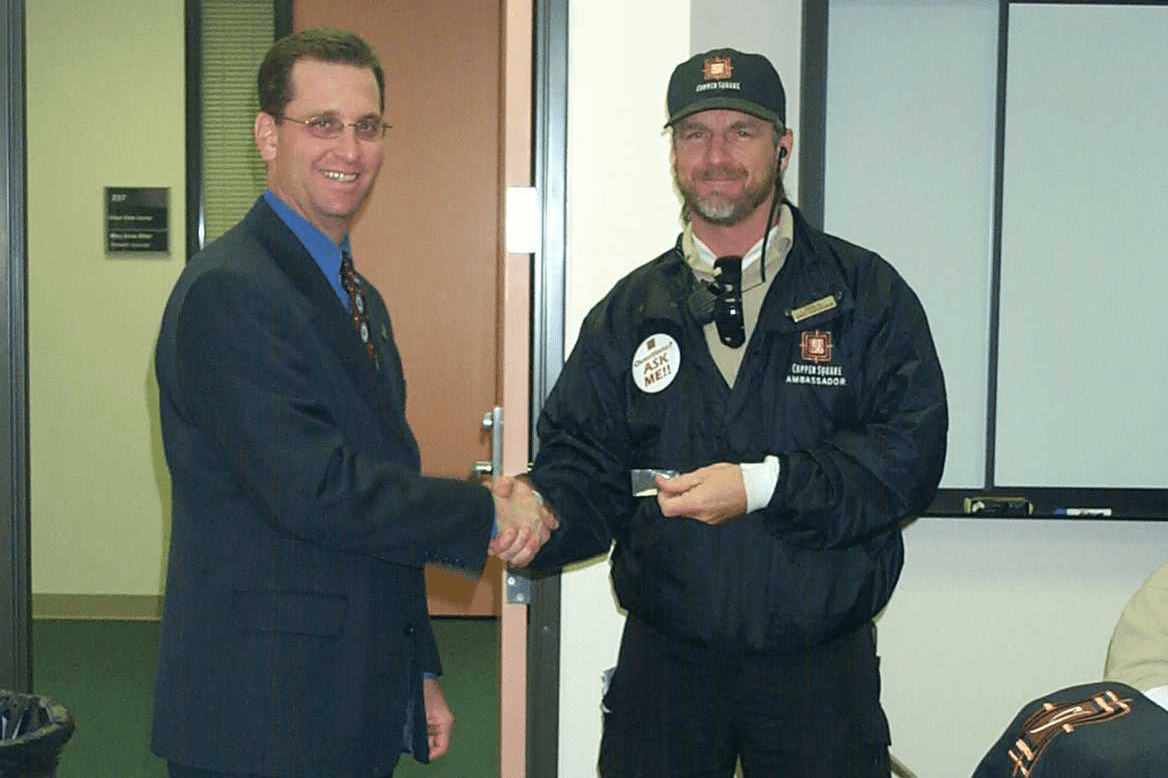 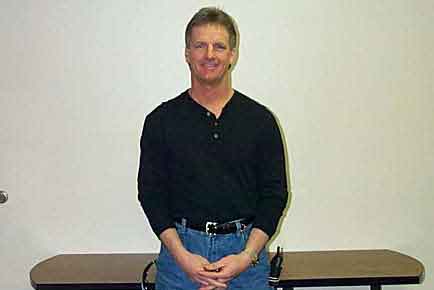 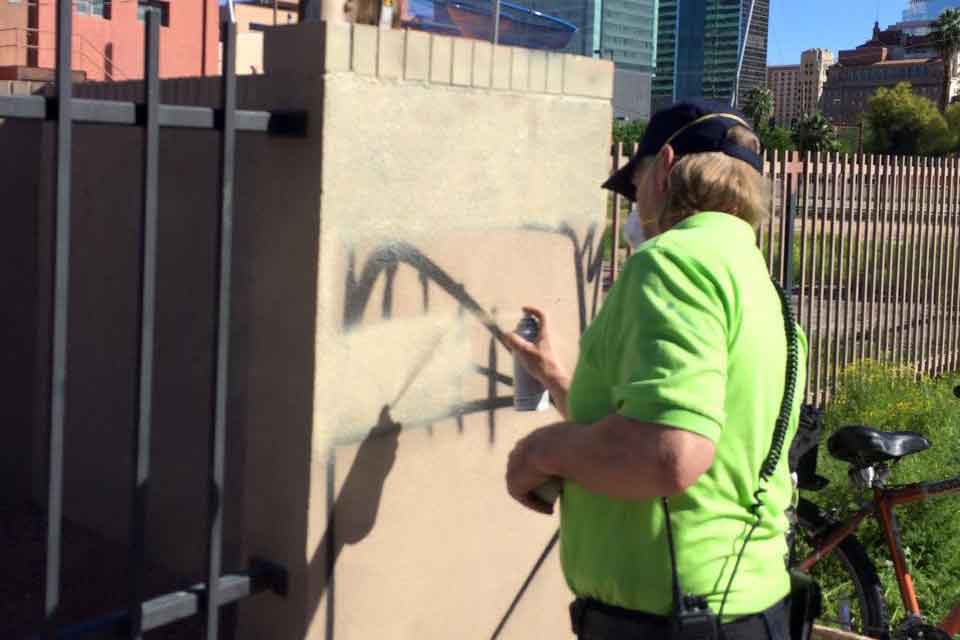 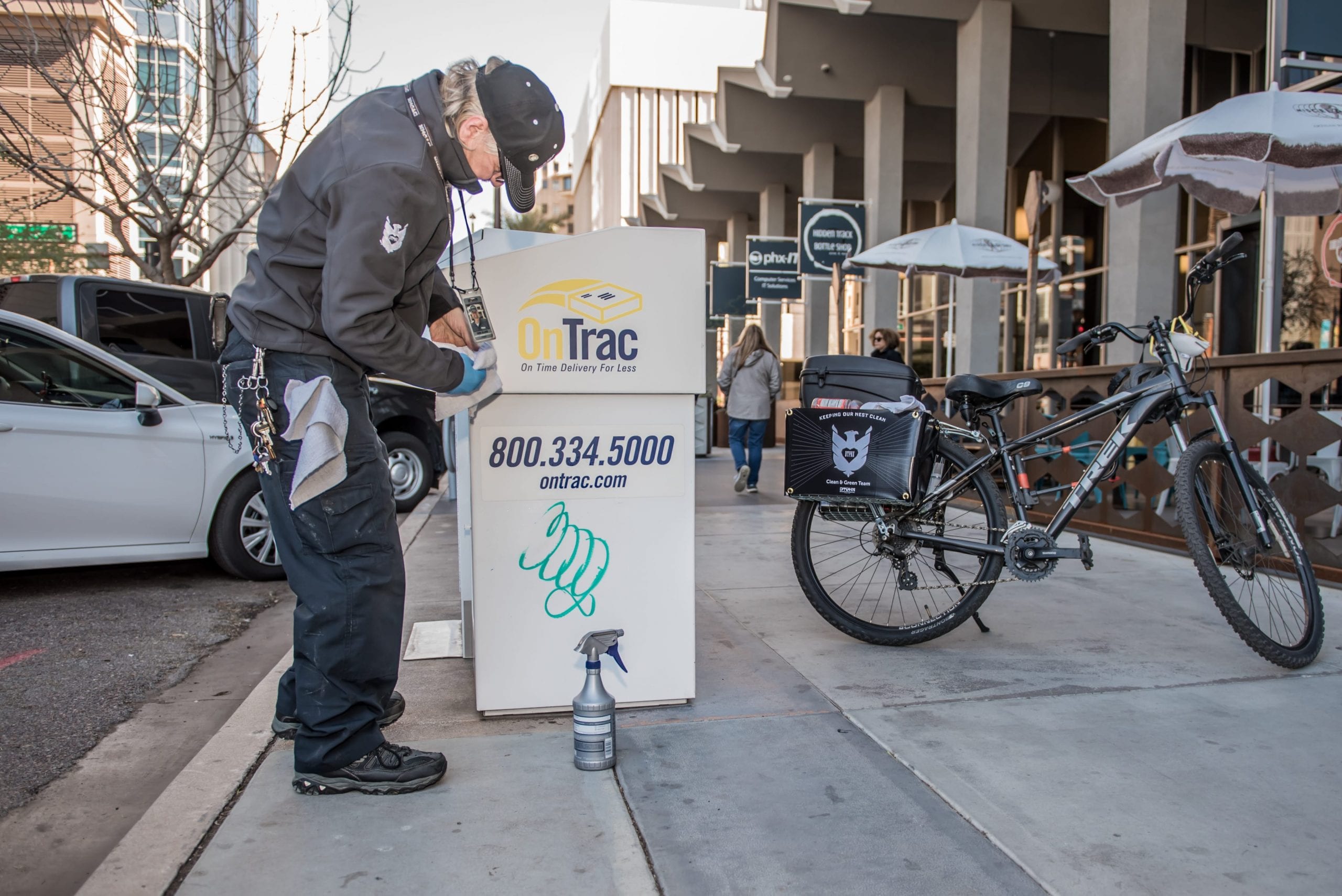 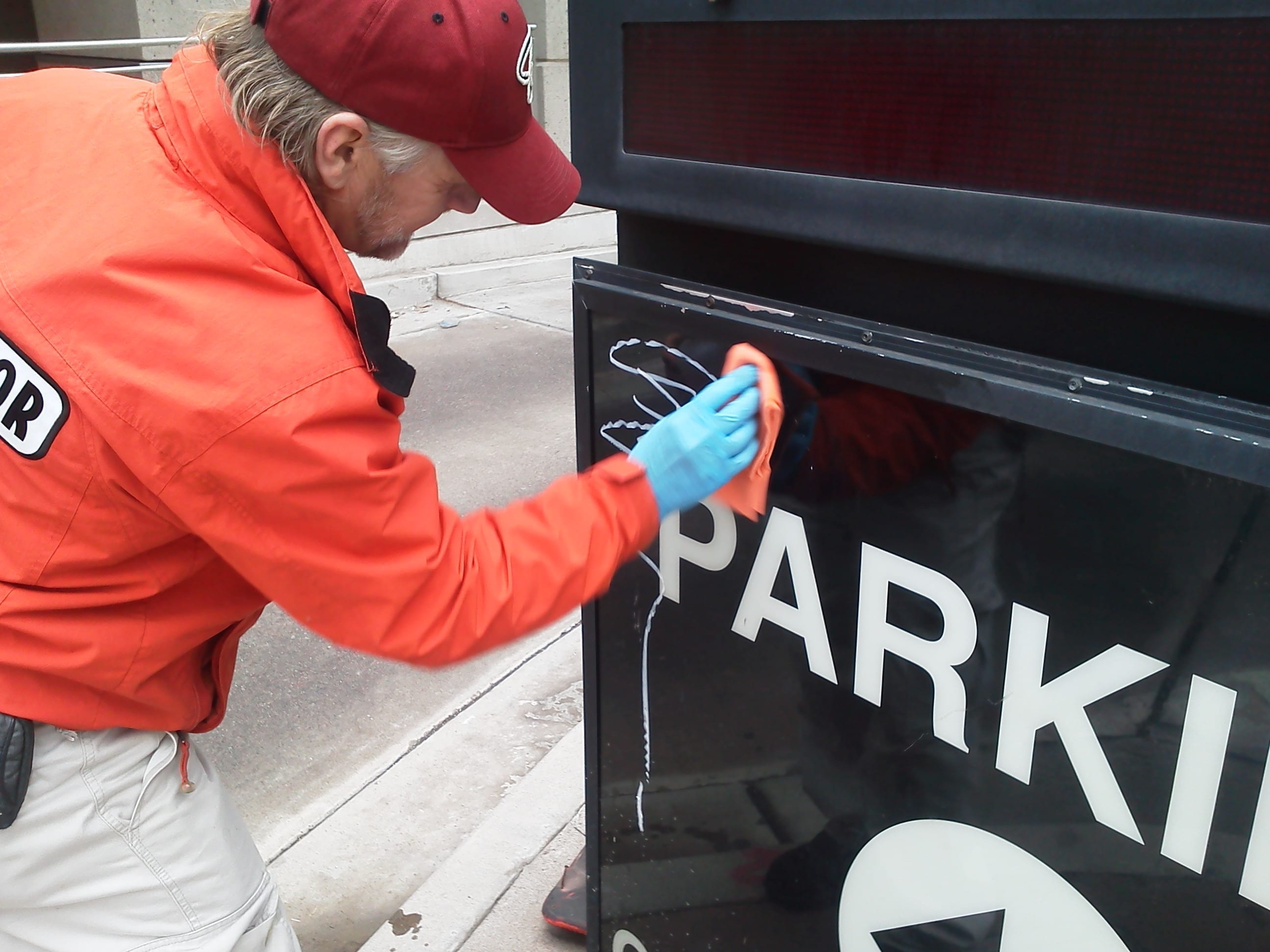 You’ve probably seen Don Olund cruising around Downtown Phoenix in his mobile office – a bike with a toolbox full of paint, solvents, gloves and dust masks. Donning sunglasses and a grey DTPHX work shirt, he has a keen eye for spotting graffiti tags and stickers, and an innate talent for removing them.

Olund, 64, takes great pride in the streets of Downtown Phoenix. It’s his home away from home, and every day for 27 years, he’s been working tirelessly to make it a cleaner, greener and friendlier place.

After nearly 30 years, and removing a staggering 50,000 tags and stickers during his career, Don Olund is retiring from the Downtown Phoenix Partnership (DPP).

“It’s an amazing number,” said Dan Klocke, executive director of DPP. “My guess is it would cover the side of the Renaissance Towers. That work has made downtown a much nicer place for everyone to enjoy. He will be missed, as will the great work he did.”

Olund started on the Downtown Clean and Safe Team in 1993. “Clean and safe” programs were the crux of urban revitalization projects during the ‘90s, and were adopted by business improvement districts around the country — including DPP.

At that time, the Clean and Safe Team swept up sidewalks, picked up litter, removed graffiti and helped provide an additional element of safety beyond the police.

They were all contracted employees back then, so Olund didn’t become a DPP employee until 2001 when the Downtown Ambassador hospitality program officially launched.

During that time, Olund became a graffiti removal specialist. He worked as a Ambassador for 12 years until a separate Clean + Green Team was formed in 2013.

It was a job many didn’t take seriously, according to Samantha Jackson, senior director of strategy and community affairs for DPP. But Olund had a knack for it.

He understood the right mix of chemicals to remove a tag completely (with no shadow of the tag left behind), and to this day, knows the right paint mix to match downtown’s tan utility boxes.

During his years of service, he also got to know many of downtown’s “outdoor residents,” a term the Ambassadors respectfully use for those experiencing homelessness, often spending his own money to buy people new clothes, shoes or a meal.

He also grew to appreciate the murals cropping up around downtown, along with the community and economic value it brought to the area. He really tried to understand and appreciate the line between art and graffiti.

While his work was a kind of art form of its own – it wasn’t always pretty. It could be hot, tiring and seemingly endless, as more tags would invariably appear in areas he just cleaned.

“Don has had many apprentices over the years, but few work with the kind of heart he has,” Jackson said. “To me, he’s an Ambassador icon.”