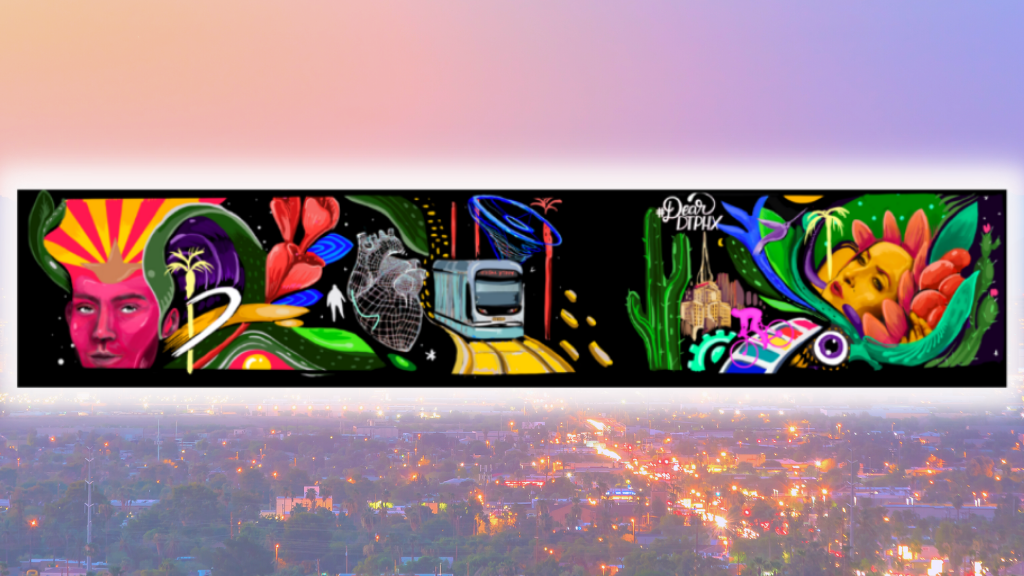 Inspired by the #DearDTPHX campaign, Ashley Macias’ new mural will capture some of the passion and creativity of the photo contest winners, in addition to conveying some of her own love for downtown. (Rendering: Ashley Macias)

A colorful, celebratory and personal reflection of downtown, Macias’ piece was selected through a public call to artists by Downtown Phoenix Inc. (DPI), Artlink, and the Phoenix Convention Center. The call was inspired by the #DearDTPHX photo and caption contest, launched by DPI in August 2020.

Known for her surrealist imagery blending humans, animals, plants and elements of nature — Macias’ large-scale work can be seen on the rooftop-deck of the Cambria Hotel Downtown Phoenix, inside The Golden Margarita on Roosevelt Row, within the six-part Black Lives Matter mural at Third and McKinley streets, and on numerous other walls in central Phoenix.

The goal of the #DearDTPHX campaign was to connect the community through art during a time of physical separation due to the ongoing coronavirus pandemic. It was also about uplifting diverse perspectives, and celebrating the beauty, history and culture of downtown.

Like the caption above illustrates, it became an outpouring and celebration of all things — big and small — that make this city great. With more than 150 submissions, people from around the Valley shared their love for Downtown Phoenix on Instagram.

From the pool of talented Phoenix artists included in the call, Macias was able to really capture the passion and sentiment behind #DearDTPHX, in addition to conveying some of her own love for downtown.

The mural is expected to be complete by the end of March.

We know you have Instagram
#DTPHX
The N. Porter Saddle and Harness Company was famou

Expect an ever changing downtown skyline in the ne

The Classics are BACK! See familiar movies like yo

📢 GIVEAWAY CLOSED! 📢 Many of @phxmagazine Be