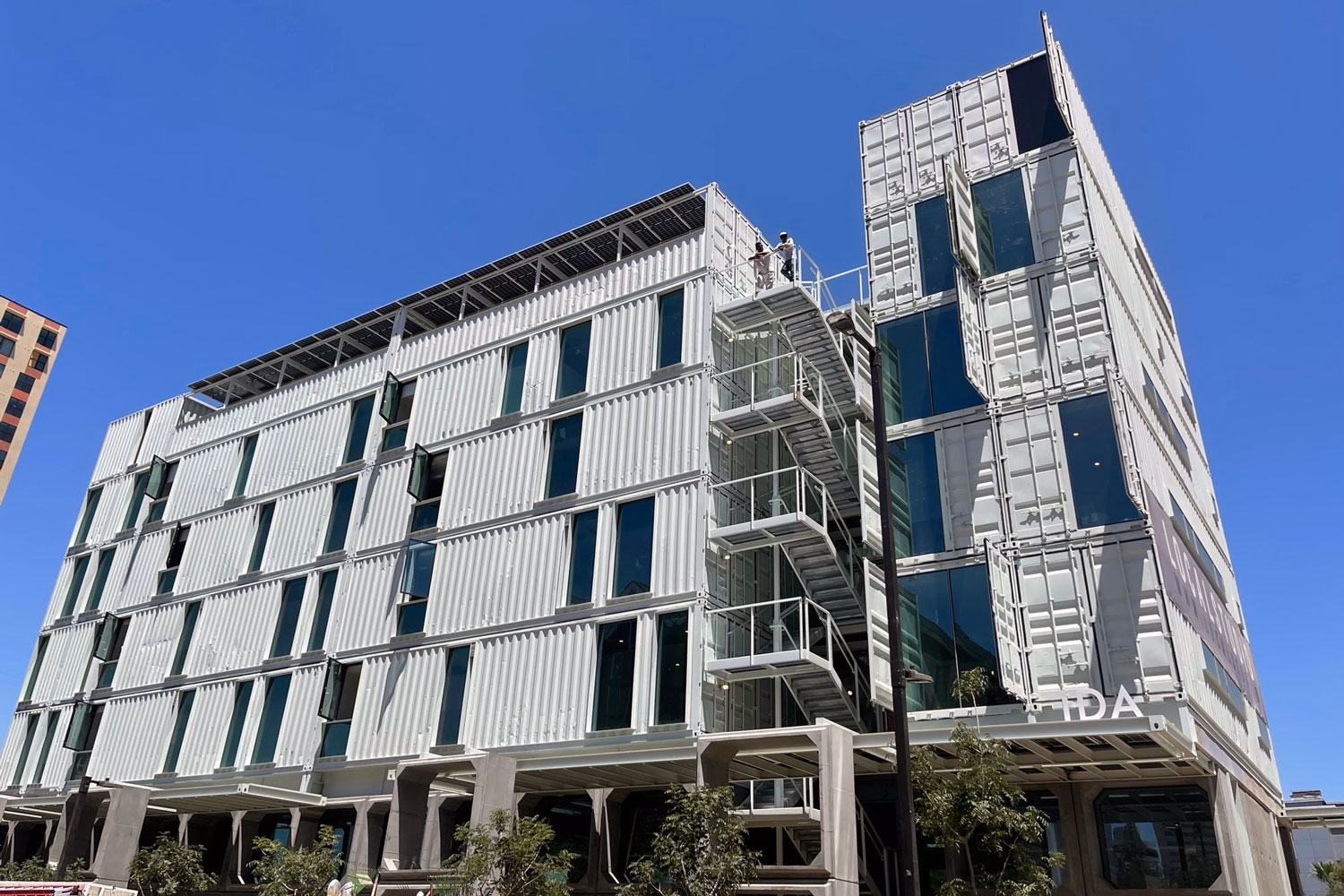 From journeying across the ocean to transporting people into new, sustainable homes, these 66 recycled shipping containers were made to move.

IDA on McKinley is the tallest development built from shipping containers in the nation, according to design-build firm Local Studio. Opening in June, the six-story building features 18 one- and two-bedroom apartments, with ground-floor space for commercial tenants.

In all, the project utilizes 615,000 pounds of repurposed Corten steel, known for its high strength and corrosion resistance. Closed cell foam insulation in the walls helps with energy efficiency and sound proofing.

IDA replaces a small parking lot on the corner of McKinley and Third streets, barely big enough for 22 cars. But activating an under-utilized parcel is just the beginning of its environmental impact, according to developers. 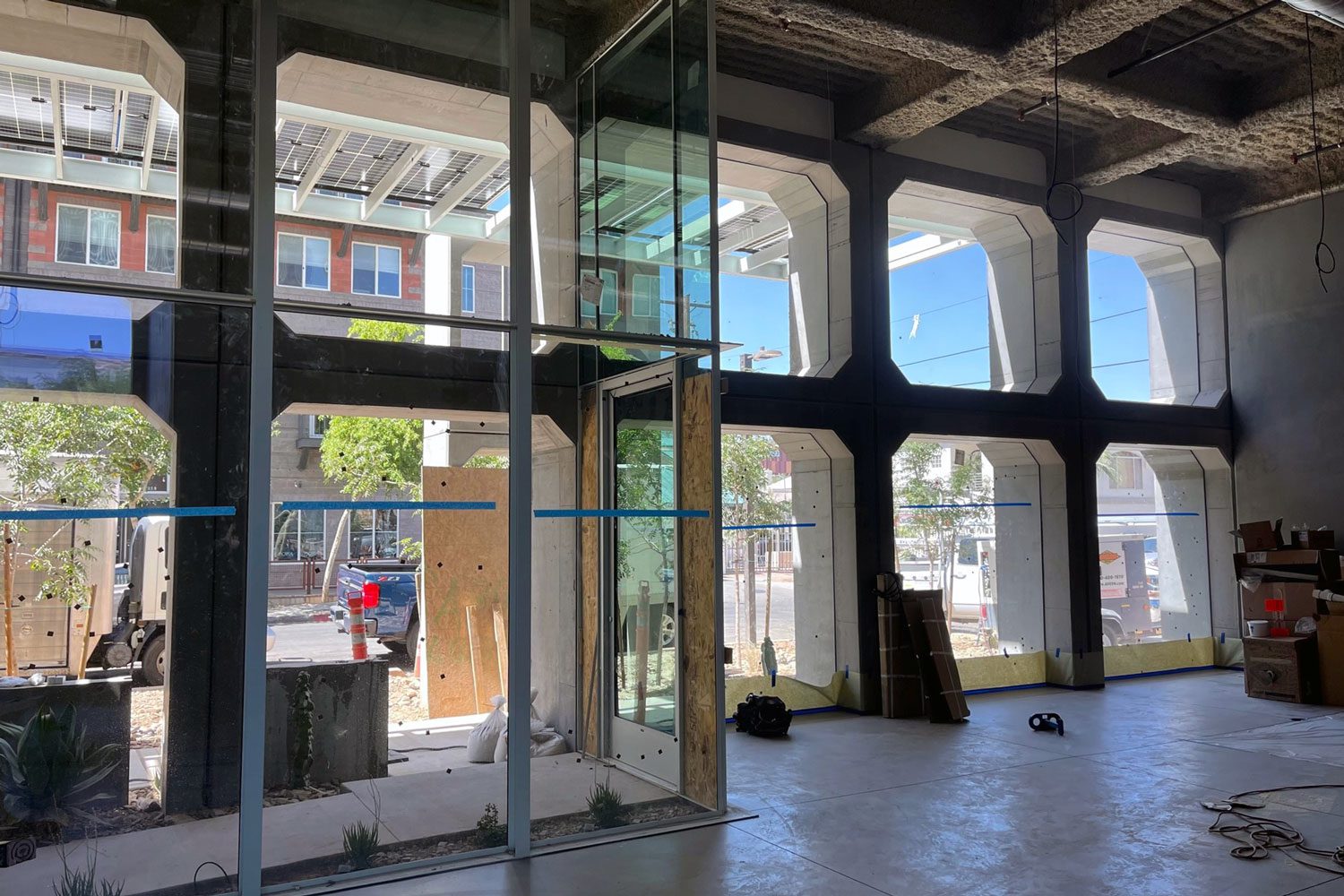 Concrete culvert structures, typically buried underground, are used on the exterior of the IDA’s ground-floor, providing shade for the floor-to-ceiling windows. The molds were provided by Olson Precast Company. (Photo: Fara Illich)

“What I’m trying to accomplish is changing hearts and minds one block at a time, particularly in the area of sustainability,” said Kathleen Santin, partner at Local Studio. “It’s what we’ve done from day one.”

The trend of taking shipping containers and recycling them into architectural elements for homes hit Phoenix in the fall of 2015, when Containers on Grand opened. It already had a waiting list upon completion.

Brian Stark, founder of Local Studio and one of the architects behind Containers on Grand, began working on a second installment of shipping container apartments, called The Oscar, in 2016. That project opened in May 2017 at Portland and Second streets, with similar success to Containers on Grand. 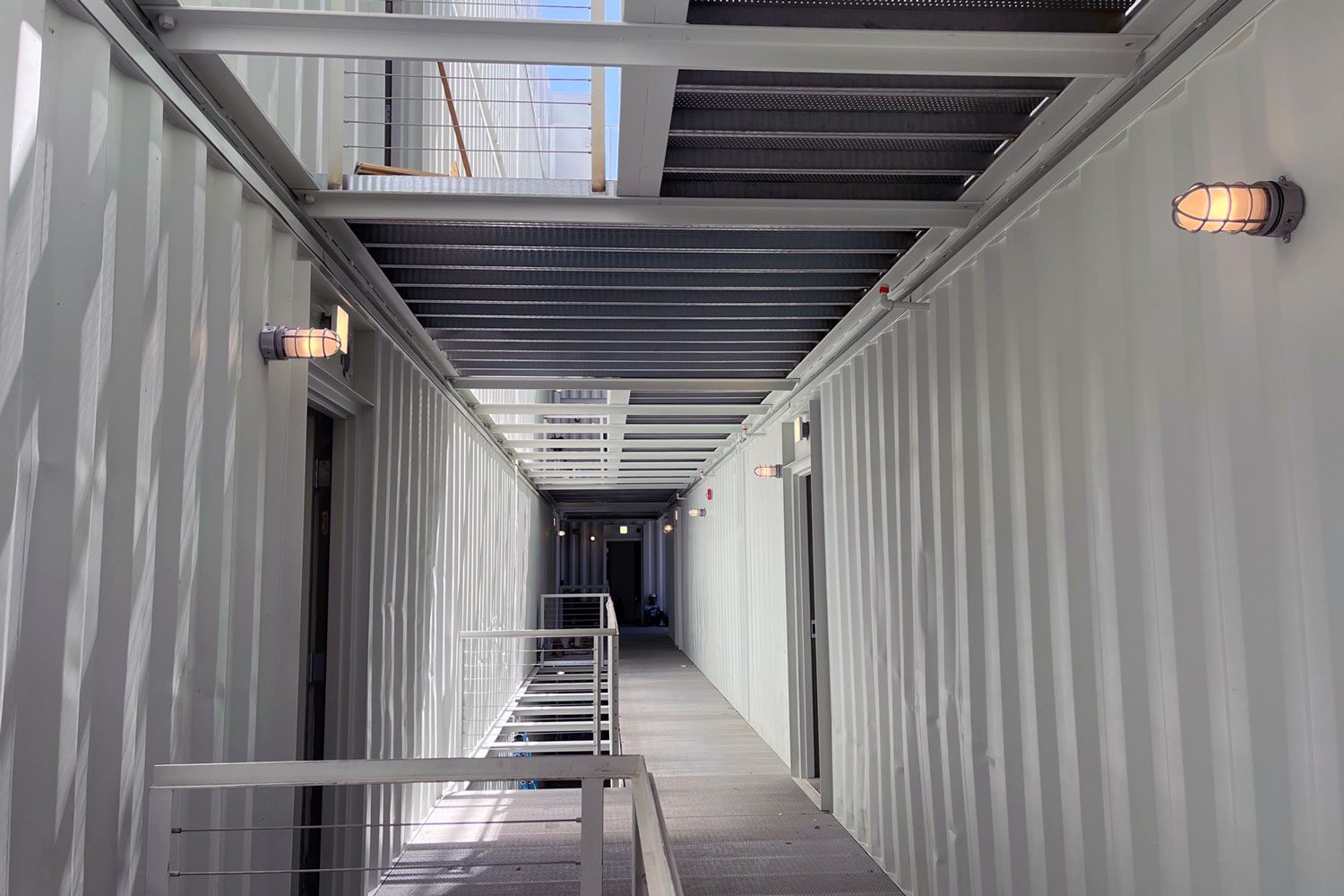 By the time Local Studio completed work on The Churchill restaurant and retail destination in August 2018, Stark and his design-build firm had established themselves as downtown’s sustainable building leaders — at the forefront of shipping container architecture and innovation.

In addition to recycled building materials, IDA utilizes rainwater harvesting, solar panels, passive solar design elements, low-water xeriscape on the exterior, “bioswales” for rainwater irrigation, and a number of other features designed with sustainability in mind.

A simple design element with a big impact, bioswales are small trenches filled with plants dug between the sidewalk and street, naturally collecting rainwater for desert irrigation, while simultaneously filtering polluted runoff.

Over the sidewalk, a double-sided solar canopy shades passersby, while also providing electricity for the ground-floor commercial space. There’s also a double-sided, solar-shaded roof deck, providing views of the downtown skyline, while also producing 33-40 percent of the apartments’ power needs, according to Santin. 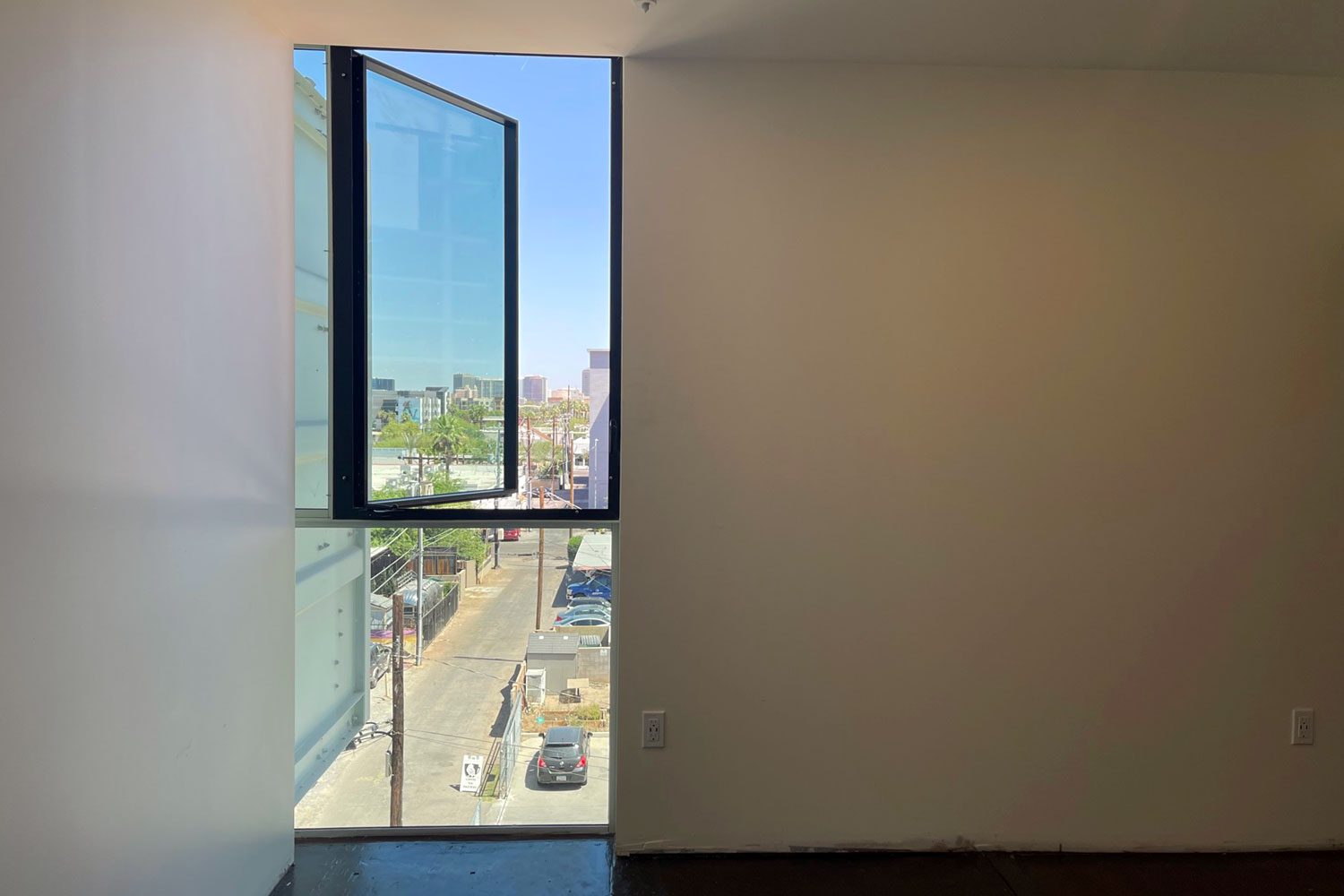 Opening in June 2022, the six-story IDA on McKinley features 18 one- and two-bedroom apartments, with desirable features like floor-to-ceiling windows, a built-in washer and dryer, and the original wooden shipping container floors. (Photo: Fara Illich)

IDA meets nearly all of the City of Phoenix’s Climate Action Plan goals, and Local Studio worked hand-in-hand with the city and APS to rewrite the rulebook for sustainable building, according to Santin.

To promote a lower carbon footprint, there is no parking available on property. Instead, the building boasts exterior showers for those who want to bike or walk to work, and an electric bike charging station. 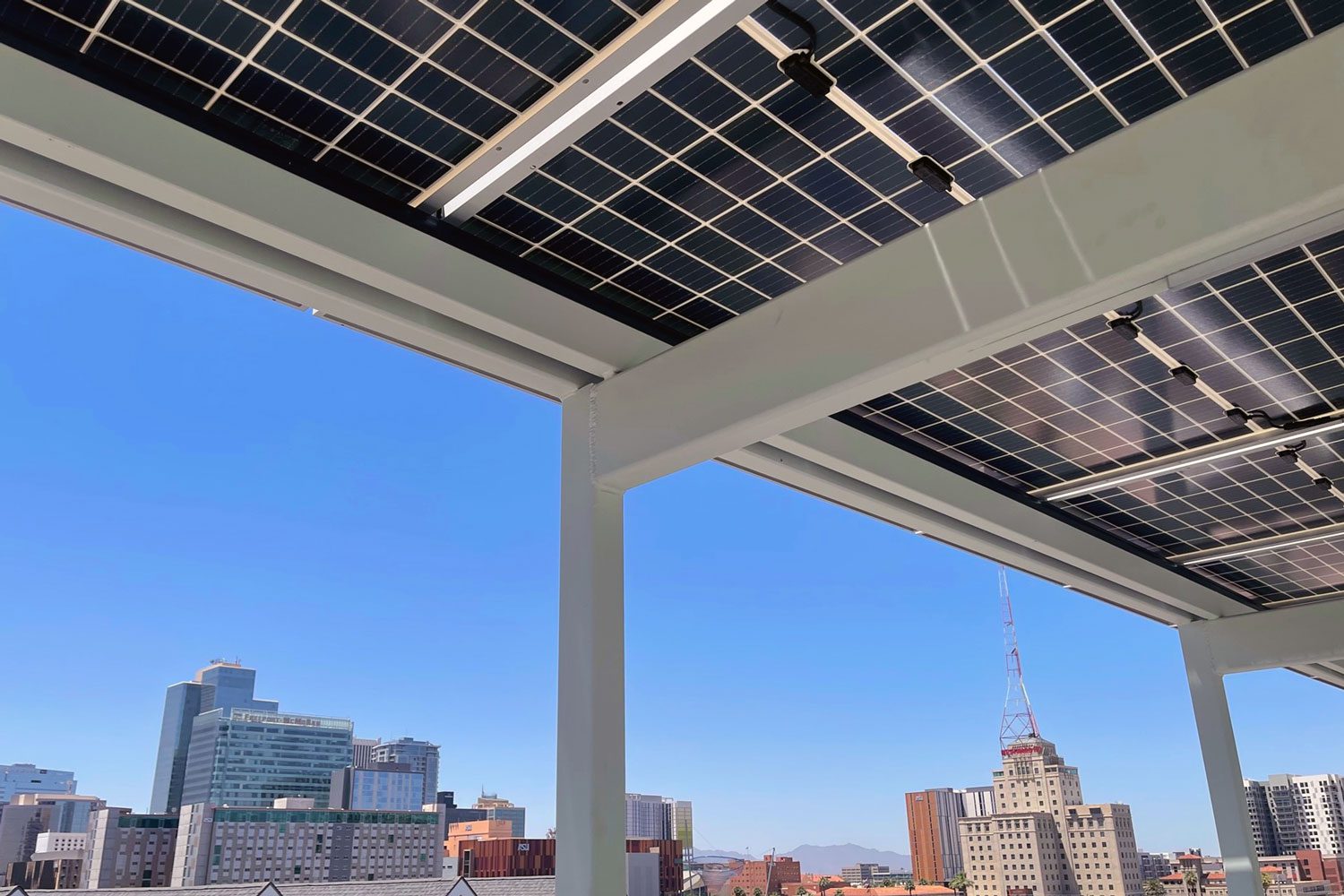 Double-sided solar canopies on both the ground floor and rooftop capture the sunlight at all times during the day, a 33-kilowatt solar system which produces much of the power needed for the building. (Photo: Fara Illich)

Porous walkways between units help harvest rainwater, which collects in a 3,000 gallon tank, and for drinking, filtered water stations on each floor encourage bottle re-usage.

“I think things are changing — changing incrementally,” Santin said. “For the city, APS to do some of the things they’ve done here, it’s a big step in the right direction.”