The walls may be bowing, the interiors damp with old age, and the floors hidden beneath layers of dust, but tall, exposed ceilings and red brick walls more than make up for an otherwise imperfect infrastructure.
Both companies and individuals are using the often-deteriorating foundations of old buildings and warehouses to establish and grow their businesses — preserving history and reviving the Warehouse District in the process. 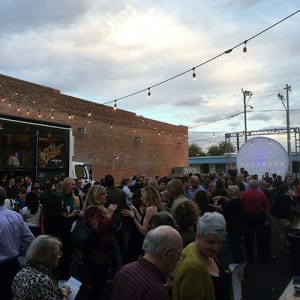 This new-found vitality can be credited to the individual persons and companies spurring growth in the area just south of the railroad tracks.
“The growth in the Warehouse District now is organic,” said Dan Klocke, vice president of development for Downtown Phoenix Inc. (DPI). “These businesses are doing it themselves. This is not a grandiose plan to try to transform block after block after block.”
Referring to the proposed entertainment district for the area that went defunct several years ago, Klocke said it isn’t typically one project that’s responsible for transforming a downtown area but a series of them over time.
“But I think what’s going on now is truly how cities have evolved and changed and grown over the last few decades,” he said. “It’s just individual businesses and business owners who are doing really, really good things and all that added up together starts to create a new momentum and… feel for the area.”
Veterans like longtime property owner-developer Michael Levine, CCBG Architects and Dudley Ventures invested their time and energy over the years in preserving the defining industrial character of the area. Now, they’re joined by groups like software company WebPT, Arizona State University, R&R Partners, and the Scheduling Institute to name a few.

R&R Partners, an integrated communications agency, moved into its new home in November of last year — a historically designated, 26,000-square-foot warehouse on Second and Buchanan streets.
After spending $2.5 million on renovations, which they documented here, the building has reinforced trusses, stunning, original concrete floors, brick walls, and quirky details like an antique safe and freight elevator.
Dating back to 1926, the building was built as a produce warehouse by Henry Ong, a Chinese immigrant whose family toured the finished building, and shared photos and memories with R&R Partners, according to Matt Silverman, vice president of R&R Partners. The group even had a video made on the history of the building, which you can watch here.
“This isn’t just an office. This is a place rich with history that we get to live in and inspires us to do great work,” Silverman said. “I think creative people really thrive off of this environment.”
Roughly 40 employees work on the ground level — and in the basement — under open ceilings and skylights. The grays, whites and subtle shades of yellow of the new interior as well as its spacious, open floor plan lend to its industrial origins.

In addition, the Scheduling Institute, a medical training institute, also has a new home in the Warehouse District. After almost signing a lease in a high-rise office building, they opted for their 23,000 square-foot facility complete with open ceilings and red-brick walls instead.
“We were after an experience for our clients,” said Andrea Lansford with the Scheduling Institute. “It’s a cool space and I think that every building has a story, and it literally just gives our business the opportunity to share in that and keep that here.”
The lettering — “fruits and vegetables” — is fading but legible, leftover from the space’s days as a produce warehouse in the 1940s, Lansford said. After a brief stint as the bar Jackson’s on 3rd, the property is alive again with professionals bustling between seminars or taking photos on the new outdoor courtyard.
She said downtown was the perfect location for their clients, who can conveniently take the light rail to and from the airport, walk to hotels, bars and restaurants, and easily find entertainment.
DPI’s Klocke said the Scheduling Institute is a really important asset for Downtown Phoenix, because it brings people from outside of Phoenix. These visitors not only spend money at hotels and local restaurants, he said, but they go home and talk about their great experience downtown.
“From that perspective, I think the Scheduling Institute is one of the best things that’s been happening and it’s been totally under the radar,” he said.

There’s an emerging theme: creative and tech-driven industries are redefining the area with the employees, businesses and building owners creating an intense energy unseen before in the Warehouse District, according to David Krietor, CEO of Downtown Phoenix Inc.
In years past, there were land speculators and absentee property owners, he said, but now there are strong companies and individuals keeping the momentum going.
Amidst all of the positive growth, however, there are things worth paying attention to. Klocke said it’s crucial that new construction on vacant parcels have designs that complement the industrial aesthetic of the area and that existing warehouses are preserved through rehabilitation – not demolition.
Krietor and Klocke also stressed the importance of respecting the wants and needs of residential neighborhoods just south of the area, Central Park and Grant Park.