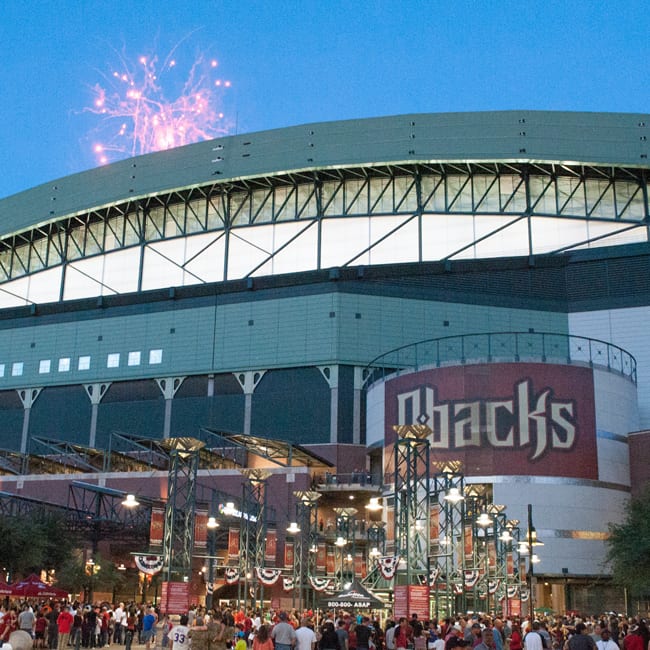 Life in Downtown Phoenix is just better during baseball season. The streets run Sedona Red with caps and jerseys, bars and restaurants are filled with passionate fans who believe This Is Our Year, and Chase Field becomes the go-to spot to feed your fix for everything from 18-inch corn dogs to frozen yogurt served in a mini team batting helmet.
What’s New at Chase Field? If you’re headed to the ballpark there’s so much new to see, drink and eat. The team has made the fan experience at Chase Field a high priority and it shows. Here’s the lineup of what’s new, both on the field and in the concourse.
New Manager: Chip Hale replaces Kirk Gibson as Diamondbacks manager. Hale played college ball at the University of Arizona in Tucson and first spent time in the D-Backs dugout in 2006 as a part of manager Bob Melvin’s staff. 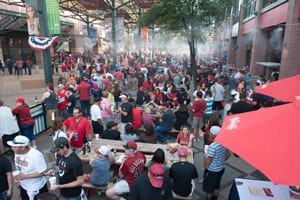 New Pitchers: So many new pitchers. The starting rotation has been remade almost entirely. Josh Collmenter is now the senior member of the group and he’s joined by free agent acquisitions Rubby De La Rosa and Jeremy Hellickson, plus sophomore Chase Anderson and top prospect Archie Bradley.
New Import: Cuban outfielder Yasmany Tomas signed a $68 million deal with the D-Backs over the winter and while he’s already shown he can hit with great power, defensive struggles at third base ultimately punched his ticket to Reno to work on his game in Triple-A ball. Expect to see Tomas later this season.
New Restaurants: Lo-Lo’s Chicken & Waffles, America’s Taco Shop, Paradise Valley Burger Co., Zoyo Neighborhood Yogurt. Plus, our friends at Best In Show Events are programming Food Truck Alley on the plaza just outside Gate A, which will feature different local food trucks every home series. 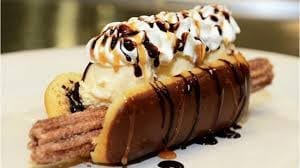 New Wow They Really Did That Item: The Churro Dog is this year’s en vogue stadium delicacy. It’s a warm cinnamon churro inside a long john glazed donut topped with frozen yogurt, caramel and chocolate sauce.
New Beers: Formerly known as the Arizona Baseball Club, the newly designed Draft Room in center field will be the choice hangout for craft beer lovers, featuring over 20 taps in a casual, pub-like atmosphere.
New Amenities: The team added a new first-of-its-kind suite experience on the main concourse. Suite @ 122 is located behind home plate and offers premium viewing and vending. The space can host two groups of 10 or one super group of 20. For those fans lucky enough to have a ticket in the lettered seating section, the underground American Airlines Lounge located behind the D-Backs dugout is a premium club with swanky bar and custom dining options. 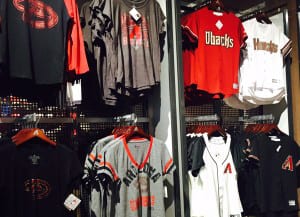 New Merchandise: The Chase Team Shop by Majestic offers completely remodeled and expanded stores on the main concourse, suite level and upper concourse. The added inventory pays special attention to women and children. Need a onesie for your little cleanup hitter or a bedazzled tank for your sweet? The Team Shop has you covered.
New Promotions and Giveaways: The team will pay homage to its roots by donning the alternate home vest uniform (worn from 1998-2006) every Thursday home game; Fireworks Fridays are back; Hello Kitty (April 11), Josh Collmenter (May 9) Tony LaRussa (June 6), A.J. Pollock (July 18) and Hall of Famer Randy Johnson (July 26) get the bobblehead treatment; get a Paul Goldschmidt Cap (April 25) or probably the greatest thing ever a D-backs Fedora (May 24); you can also fight some crime during Superhero Night (May 22). For a complete list of  promotions and giveaways click here. Of course if you just want peanuts, Cracker Jack and a foam finger Chase Field has all that, too.