Discover the Story Behind 'Malinda,' the Bold New Mural in Downtown Phoenix 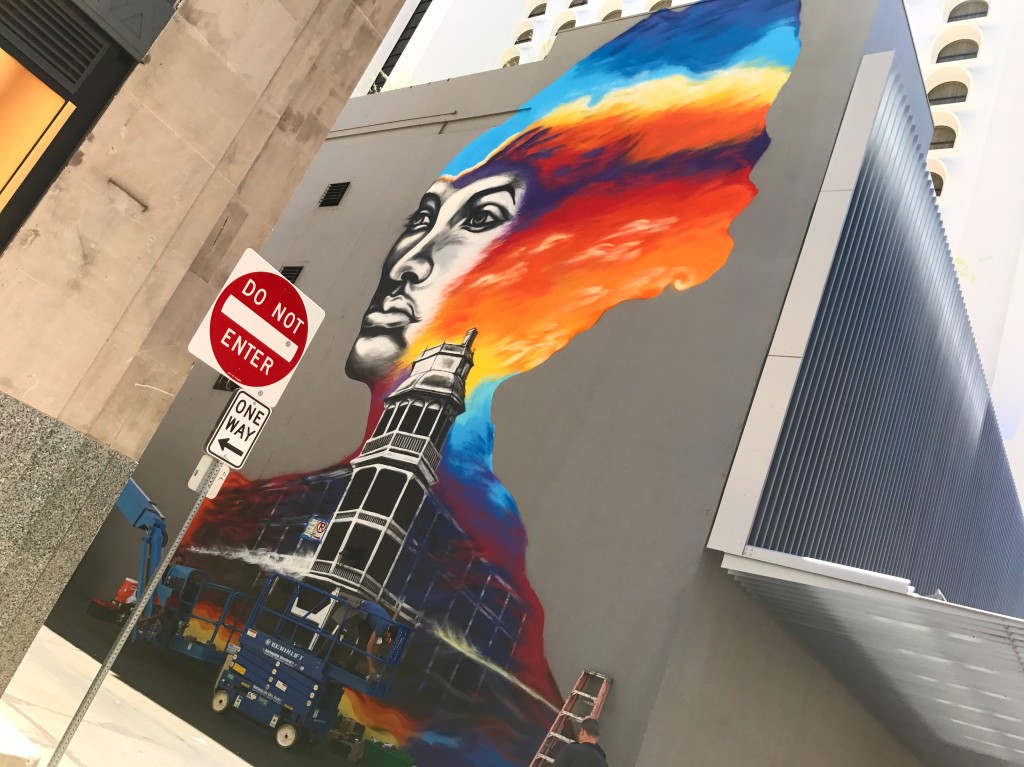 More than 100 years after her passing, one of the most colorful characters in Downtown Phoenix’s history is making headlines again, but not for the usual reasons.

On Sunday, May 28, local artists Hugo Medina and Darrin Armijo-Wardle completed a stunning and sizable mural in the alley to the north of the recently remodeled Renaissance Phoenix Downtown Hotel.
Measuring approximately 70 feet high by 50 feet wide, “Malinda” is an ambitious mural project that activates the alley connecting Central Avenue to First Street while paying tribute to both the hotel’s legacy and the rich life of an African-American woman, Malinda “Malindy” Curtis, whose spirit is said to inhabit the alley to this day.

One of the most well-known muralists in Arizona, Hugo Medina, and artist Darrin Armijo-Wardle developed the “Malinda” concept working in close concert with Downtown Phoenix Inc. (DPI) and Renaissance leadership.

“Public art is a way for us to celebrate the unique culture and history of our city,” said Ray Cabrera, DPI’s director of downtown environment. “(The artists) have created something special that we hope brings people to see their work and other downtown treasures.”

After relocating to Phoenix just before the turn of the 20th Century, Malinda became well known to the downtown area for her rambunctious behavior as well as her enormous heart. Over the years, she had several run-ins with the law, her name appearing gossip-like news articles more than once. She was also accused by a jealous woman of using her “feminine charm” to lure the woman’s husband.

While she did not walk the straight and narrow path, she was one of the warmest hearted old women who ever lived. — Arizona Republican, Oct. 29, 1910

Malinda, whom the Renaissance first memorialized with the opening of the Melinda’s Alley speakeasy bar in 2016, lived in an apartment on the alley shared by the 1896-built Hotel Adams. She also spent time in Tucson’s “Maiden Lane” (aka red light district) under the alias Roxy.

Malinda was an unforgettable and well-liked figure in downtown, in spite of her despite her struggle with alcohol and history as a “courtesan.” She was said to have been “skilled at culinary art” and was incredibly generous into her final days. She died Oct. 28, 1910.

The Hotel Adams, Phoenix’s first luxury hotel, was destroyed by a fire in 1910. The Renaissance, which now stands in its place, was originally built in 1973 and spectacularly remodeled this year. The mural which now graces the north wall of the Renaissance features a representational portrait of Malinda, fused with the hues of the Sonoran Desert sunset and the Hotel Adams ablaze within her figure.

The mural adds to downtown’s growing portfolio of alley art. Last year, DPI partnered with Arizona Latino Arts and Cultural Center to create the Alley of the Arts mural behind the Hyatt Regency Garage.

“As downtown becomes more of a neighborhood and popular destination for visitors, it’s important for us to focus on the pedestrian-level experience,” Cabrera said.

DPI and the Renaissance Phoenix Downtown Hotel will host a dedication ceremony for “Malinda” on Friday, June 16, as part of downtown’s Third Friday arts programming.