6 Bike Lane Projects Coming to a Downtown Neighborhood Near You 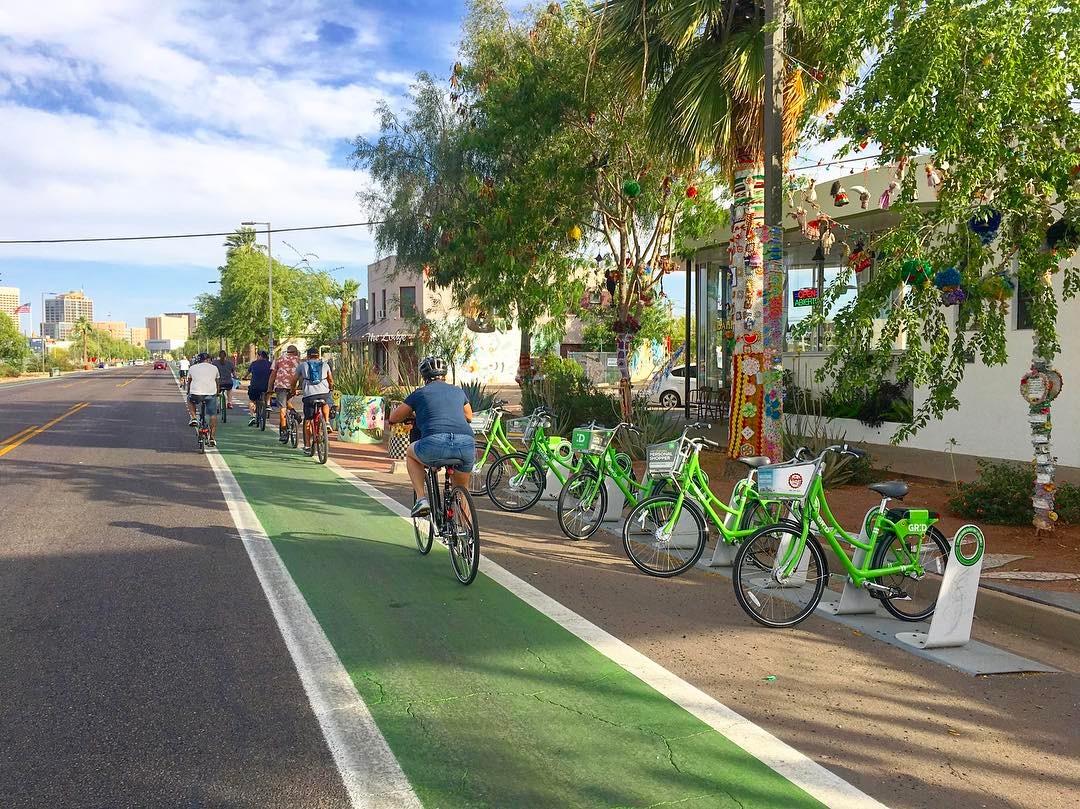 Right now, Phoenix lacks a comprehensive bicycle network connecting the downtown business district with surrounding neighborhoods.
But a number of improvement projects aim to change that.
From road “diets” to restriping, the City of Phoenix is not only focusing on making downtown more bikeable, but more walkable and livable too.
Six projects impacting downtown are in the works, which will add things like cycle tracks (two-way bike lanes), landscaping enhancements, signage, lighting and ADA improvements.
Omar Peters, a director with the Urban Phoenix Project (UPP), sees the changes as a step toward making cycling as comfortable as driving.
“It’s exciting to think about biking this entire area and it’s a nice, easy, protected and pleasurable ride,” he said.
As the special projects administrator for the city’s street department, Mark Melnychenko sets up many of the community meetings advocates (like Peters) attend. Melnychenko gathers public input and helps lead the design and construction process.
“I think we’ve made some pretty good strides in what we’re doing with streets and transportation in the Valley,” he said. “If we had talked about these types of things even 10 years ago, people would not have listened to you, now it’s part of everybody’s vocabulary.”
“Complete streets” are part of that new vocabulary, a concept that emphasizes the importance of multi-modal transportation. In fact, the city just passed a complete streets policy on June 28, ensuring all transportation improvements moving forward have things like walkability and bikeability in mind.

One example of that is the First Street Pedestrian Improvement Project, which started in 2012, and is slated to conclude sometime this year.
Big changes on First Street have already been made between Van Buren and McKinley streets, including repaving, reducing the roadway width, widening the sidewalks and adding bike lanes.
Those improvements will extend through the Evans Churchill neighborhood up to Margaret T. Hance Park in the final phase.
Third Street is another major artery running north from downtown. And unlike First Street, which dead-ends at Hance Park, Third Street helps bridge the I-10 barrier from Evans Churchill into the Alvarado neighborhood and beyond.
Stretching all the way up to Indian School Road, the Third Street Improvement Project will impact a lot of central city neighborhoods. It already went through the public input process, settling on design plans that reduce the traffic lanes from five to three and add buffered bike lanes. Construction will begin in late 2018 or early ‘19. 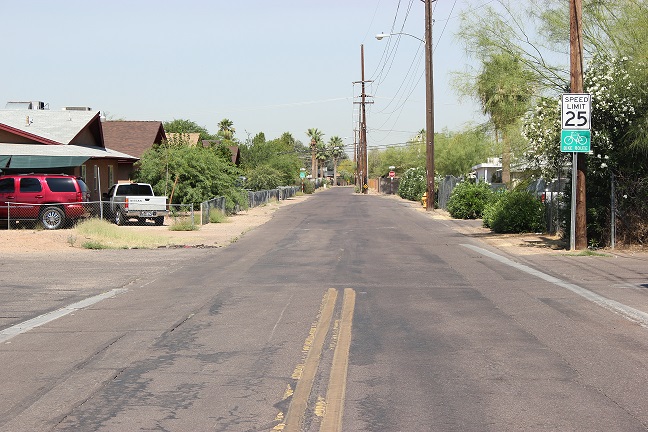 Running east-west, the Oak Street Improvement Project will tie into Third Street, which links with Roosevelt and First streets, and the rest of downtown.

It basically provides a walkable, bikable corridor through the Coronado neighborhood (and areas east of that), in addition to easier, safer passage across major intersections like Seventh and 16th streets.
According to Melnychenko, the Oak Street improvements are a great example of how the city is creating one big bicycle network, while trying to keep motorists, residents and pedestrians happy.
“Everything we do with the streets is a balancing act because we have commuters, bicyclists, public transit — and we need to balance the use of the street,” he said. “We have go about it incrementally because it impacts a lot of people.”
Construction on the Oak Street bike lanes is set to begin in 2019, and will eventually tie into the Grand Canalscape near 24th Street.
So while many of these projects aren’t connected yet, they eventually will be.

For instance, there’s a bike lane gap between Central and Seventh avenues along Roosevelt Street — but that’s about to change. The street was recently redone east of Central Avenue (along Roosevelt Row), and now it’s the west side’s turn.
In addition to repaving and restriping Roosevelt Street, Third and Fifth avenues will also get bike lane makeovers, possibly as far north as Thomas Road. As part of the lengthy pre-design process, which concluded in December 2016, key stakeholders provided input, followed by a three-day design charrette.
Because of the all the new development happening in that area and connection to downtown neighborhoods like Roosevelt and Willo, a lot of community members attended the discussions.
UPP was one of the groups present, pushing for cycle tracks on both Third and Fifth Avenues, in addition to two-way traffic south of Roosevelt.
“When you think about all the new residential that’s happening, there’s a reason why these people want to move downtown,” Peters said. “They want that lifestyle and that includes being able to walk to places, being able to bike to places.” 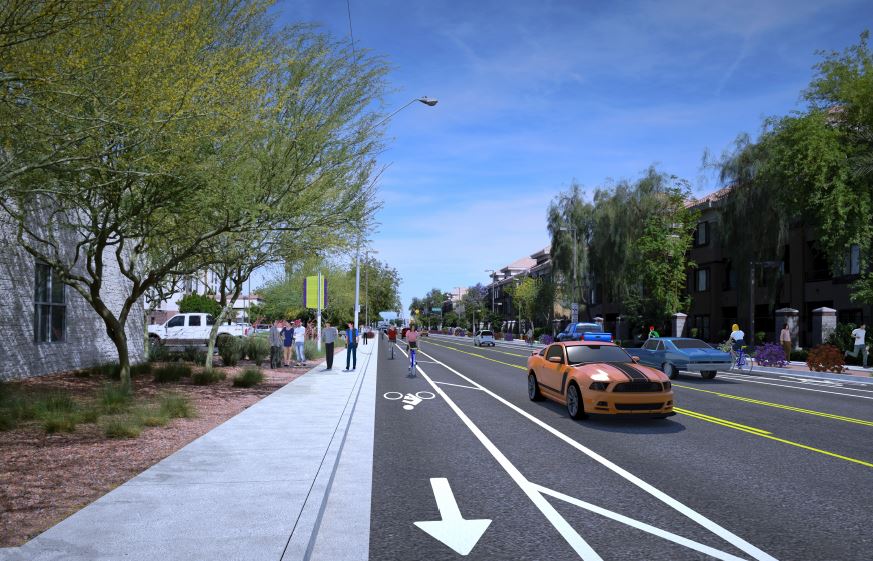 Slowing down traffic along Van Buren Street and adding bike lanes could make it easier for cyclists and pedestrians in the Garfield neighborhood. (Rendering: City of Phoenix)

The historic Garfield neighborhood east of downtown is also growing, and a new project along Van Buren Street would add bike lanes to that area as well. Spanning from Seventh Street to 40th Street, the initial design provides a road diet, buffered bicycle lanes and sidewalk improvements.
A road diet will be used to re-channel traffic, add bike lanes and achieve systemic improvements. While proven safer overall, diets can sometimes be a contentious issue for commuters, who don’t want lanes taken away.
But according to Dan Klocke, executive director of the Downtown Phoenix Partnership, it’s time to rethink that mentality.
“Cities originally widened roads so people could get to their far-flung neighborhoods faster,” he said. “It’s time to recapture some of the quality of life for those neighborhoods by reducing the impact of wide roads, and offering transportation solutions for local residents and employees.”

Using the existing roadway and curbing, a restriping project will also affect Washington and Jefferson streets — adding bike lanes to the gap between Seventh Avenue and Seventh Street.
Lanes currently exist just outside the “Sevens” going west toward the Woodland neighborhood, and east toward Eastlake Park. This would connect cyclists from those neighborhoods to the downtown business district, at no detriment to vehicle traffic.
“In a tight urban area, bikes get a lot of people around and cause no congestion,” Klocke said. “Bike lanes are an important quality-of-life amenity for those who enjoy it, but also a critical infrastructure piece for those who don’t have a car.”
Many of the projects impacting downtown neighborhoods are still open for public comment. For more information on how to get involved or attend a meeting, check the City of Phoenix website.