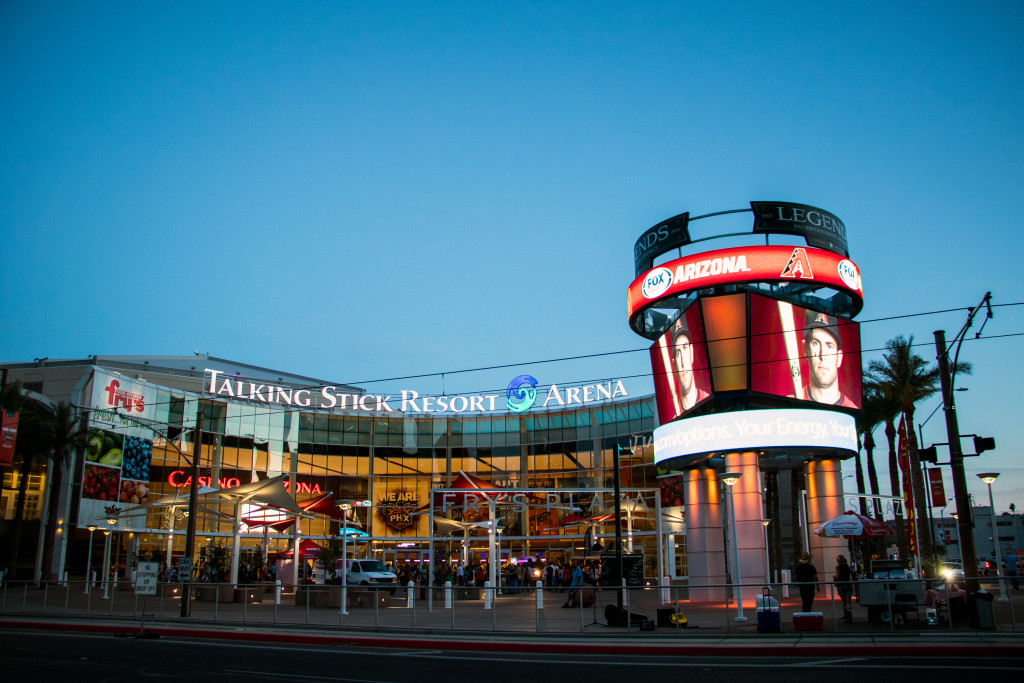 Talking Stick Resort Arena will welcome its 40 millionth guest to the epicenter of sports and entertainment in downtown Phoenix when the Phoenix Suns host the San Antonio Spurs on Wednesday, Nov. 14 at 7 p.m. Fans are encouraged to get their tickets to the game where, in celebration of the momentous milestone, the 40 millionth guest will be surprised with $4,000 and tickets for a year to all events at Talking Stick Resort Arena, including Suns and Mercury games and upcoming performances by Justin Timberlake, Michael Bublé and Ariana Grande, just to name a few. Tickets to Wednesday’s Suns-Spurs game are available at Suns.com.
“Since Talking Stick Resort Arena opened in 1992, we’ve been extremely proud to call downtown Phoenix our home,” said Phoenix Suns President and CEO Jason Rowley. “For more than 25 years, we have been dedicated to providing Arizona with the best sports and entertainment options in the Valley and helping transform downtown Phoenix into a world class destination. It’s been exciting to be at the center of the exponential growth and development that has taken place in the city’s urban core and we can’t wait to mark this memorable milestone with a special celebration.”
If life begins at 40 (million), then Talking Stick Resort Arena has had a great start. Home to anchor tenants the Phoenix Suns, Phoenix Mercury and Arizona Rattlers, Talking Stick Resort Arena also attracts the biggest musical acts, performers and family shows from around the world, including Beyonce, Billy Joel, Bruno Mars, Carrie Underwood, Dierks Bentley, Drake, The Eagles, Janet Jackson, Lady Gaga, Madonna, Selena Gomez and U2. The downtown arena hosts about 165 ticketed events annually in addition to more than 500 organization, civic and community gatherings. Talking Stick Resort Arena has been the site for the NBA All-Star Game, WNBA All-Star Game and Super Bowl Media Day.
The Suns operate Talking Stick Resort Arena through a unique partnership with the city of Phoenix. The city-owned facility opened in June of 1992, and, instantly, Talking Stick Resort Arena (formerly America West Arena from 1992-2006 and American Airways Center from 2006-2015) became the benchmark for professional sports facilities in major cities and a source of pride for the city and the state. Its design featured innovations that had not been seen in arenas of its day, including multi-story suite levels, attached premium parking facilities and an integrated team practice facility. Cities like Dallas, Denver, Los Angeles and Seattle, soon followed the example set by Talking Stick Resort Arena, which became the model for modern, state-of-the-art, downtown sports arenas.
Country music superstar George Strait opened the venue with a performance on June 6, 1992 and that was just the beginning of a magical inaugural year for the new downtown facility, which also included
performances by the most popular musical acts of that era like Bruce Springsteen, Metallica and Garth Brooks. The 1992-93 Suns team, led by the newly-acquired Charles Barkley, scored a 111-105 victory over the Los Angeles Clippers on Nov. 7, 1992 in their first game at the new arena. They would go on to secure the best record in the NBA and make an unforgettable run to the NBA Finals. Although the Chicago Bulls eventually defeated the Suns in the finals in six games, more than 300,000 people attended the parade in downtown Phoenix to celebrate a successful season and, to this day, it remains one of the most beloved and iconic moments in Valley sports history.
Wednesday night’s game is APS Military Appreciation Night, as the Suns will honor our nation’s armed forces and celebrate Veterans Day. Active and retired military personnel will receive a discount of 50 percent off tickets, and can also take advantage of a 30 percent discount in the Suns Team Shop and a 20 percent discount on food and non-alcoholic beverages at all concessions locations with a valid military ID during the game. Visit Suns.com/Military for tickets. Single-game tickets for all Suns home games are on sale now at Suns.com or by phone at 602-379-SUNS. Download the Official Suns Mobile App to stay connected with access to team news, highlights, stats, videos and more.