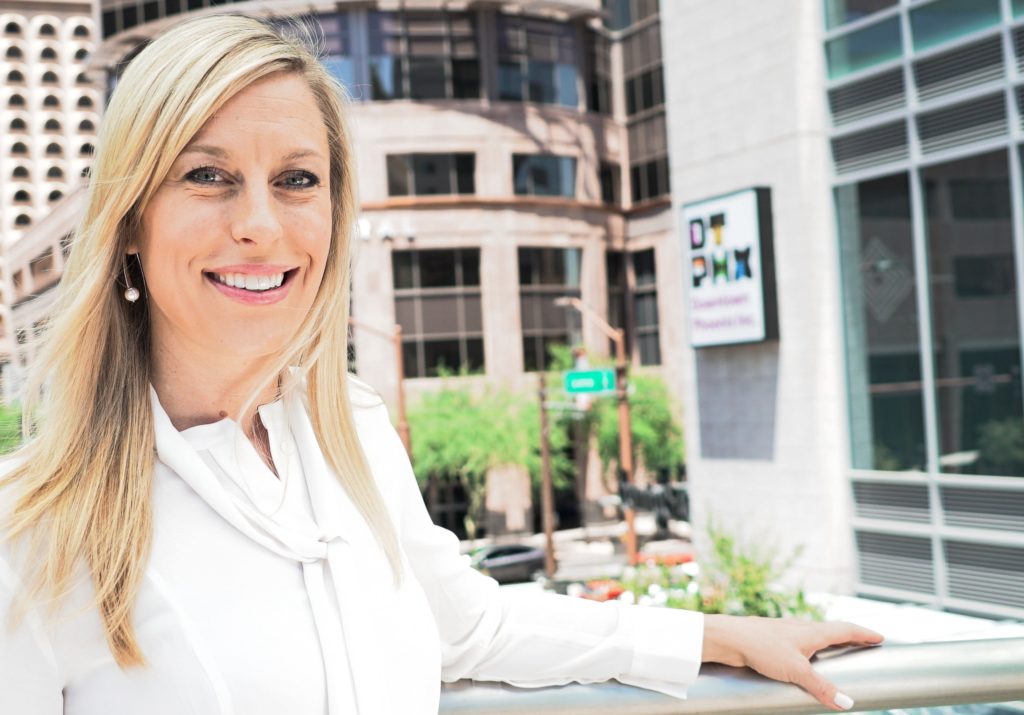 During a special meeting on Friday, Nov. 9, Downtown Phoenix Inc. (DPI) board of directors approved the appointment of Devney Preuss as new President and Chief Executive Officer, effective Jan. 1, 2019.

Preuss succeeds retiring David Krietor, who has led the organization since its formation in 2013.

Preuss has served as Executive Director of DPI’s membership affiliate, Phoenix Community Alliance (PCA), since 2016. Prior to joining PCA, Preuss led Downtown efforts for College Football Playoff (2016) and Super Bowl XLIX (2015). Her 15-year tenure in Downtown Phoenix includes working with the Phoenix Suns, where she concentrated on sponsorships and corporate activations.

“Devney’s proven track record leading Phoenix Community Alliance, as well as her dynamic experience with the Phoenix Suns and the Super Bowl, will be valuable assets to Downtown Phoenix Inc.,” said Don Brandt, DPI Chairman of the Board. “As Downtown continues to evolve, her thoughtful leadership as President and Chief Executive Officer will be pivotal in preparing us for the future.”

Downtown Phoenix has seen a spike in commercial and residential development in recent years. Combined with improved multimodal connectivity, a growing tech and innovation sector, strong university and biomedical presence, and a nationally recognized arts and culture scene; Downtown is emerging as an increasingly vibrant live/work/play/learn neighborhood.

“I couldn’t be more excited to work with the leadership team to continue the momentum of the organization and–in collaboration with our community, business and government leaders–continue to build our Downtown community,” Preuss said.

“The landscape has changed dramatically since I began working in Downtown 15 years ago,” Preuss added. “I am humbled and honored to be selected to lead DPI’s efforts to build upon the vibrant urban destination and livable community that many have worked so hard to create.”

DPI Board Member Cindy Dach is excited about what this appointment means for Downtown’s future.

“We look forward to working with Devney in her new role. She has proven herself as a consensus builder and as a leader who can bring diverse mindsets together to achieve the greater good,” Dach said. “We will miss having David Krietor at the helm, but welcome Devney as a positive step toward future growth and community building in Downtown Phoenix.”

We know you have Instagram
#DTPHX
The inaugural Pride On the Block, a free LGBTQIA+

Cheers for beers! After modifying the format last

Our beloved #DTPHX Lotería ends tomorrow! Get out

🥫you guess how many cans were used to build thi

As we honor Indigenous Peoples’ Day today we als

It’s the weekend so you know what that means, ti