'Thinking Big Picture' During the Season of Giving 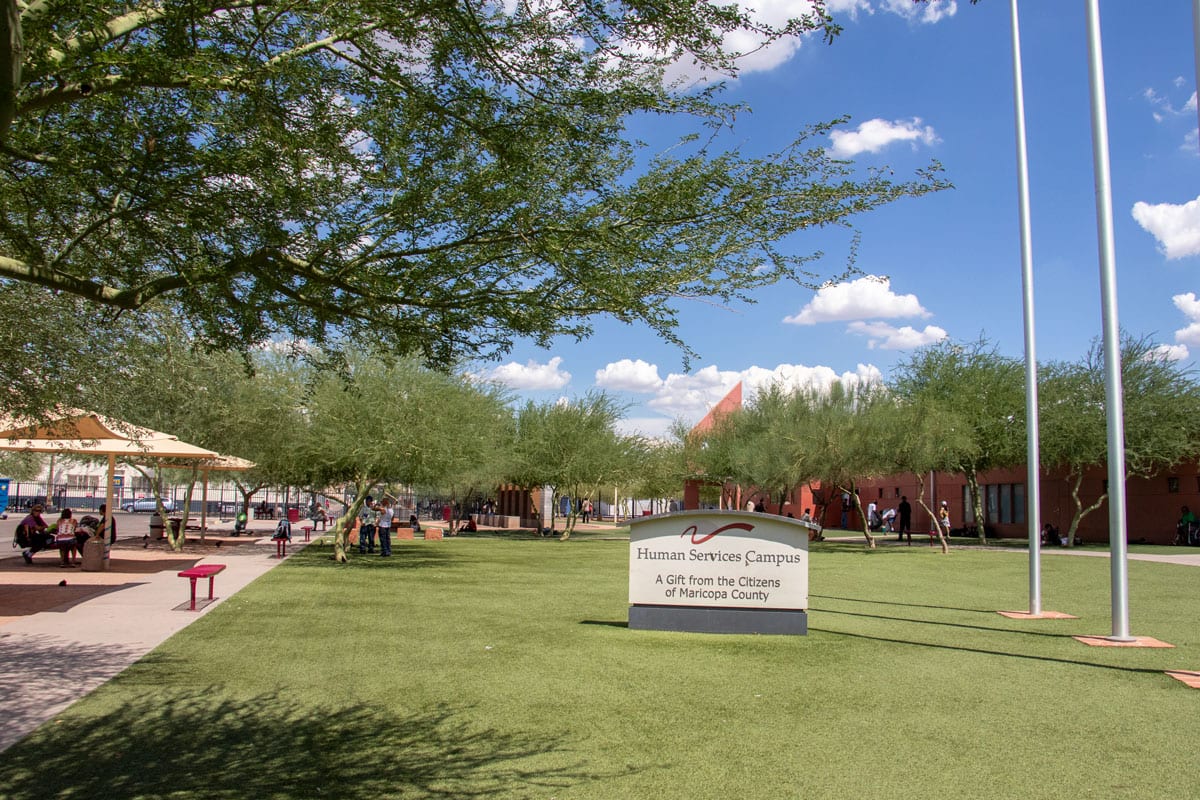 The Human Services Campus is located in the Capitol Map neighborhood of greater Downtown Phoenix. It’s a collaborative of 20 partner organizations, with the shared outcome of ending homelessness. (Photo: Fara Illich)

In the three-block radius surrounding the Human Services Campus just west of Downtown Phoenix, dozens of people are camped in close quarters. Refuse is piled high.

It’s pretty typical for the time of year, according to Terry, a 55-year-old who is staying in “the zone,” as he calls it, and helps clean up the area a couple of times a week.

“Close to Christmas, people bring a lot of stuff,” he said. “The result is what you see here.”

On Monday, a team of six people, including Terry, picked up 120 bags of trash. They do it twice a week in exchange for bus passes or other non-monetary incentives. This helps fill in the gap on days the campus doesn’t do it.

Terry said he’s been living outside “for a very long time,” and declined to provide his last name because there are people in his life who wouldn’t understand his circumstances.

He’s one of many who’d rather camp on the perimeter than stay in Central Arizona Shelter Services (CASS), but takes advantage of some of the resources inside.

“They have just about everything in there,” he said.

Handing out meals and other items on the street really ramps up this time of year just outside the 13-acre campus. It’s an area where hundreds of people experiencing homelessness congregate due to the cluster of services, which includes CASS, St. Vincent de Paul, Circle the City healthcare and a dozen others. 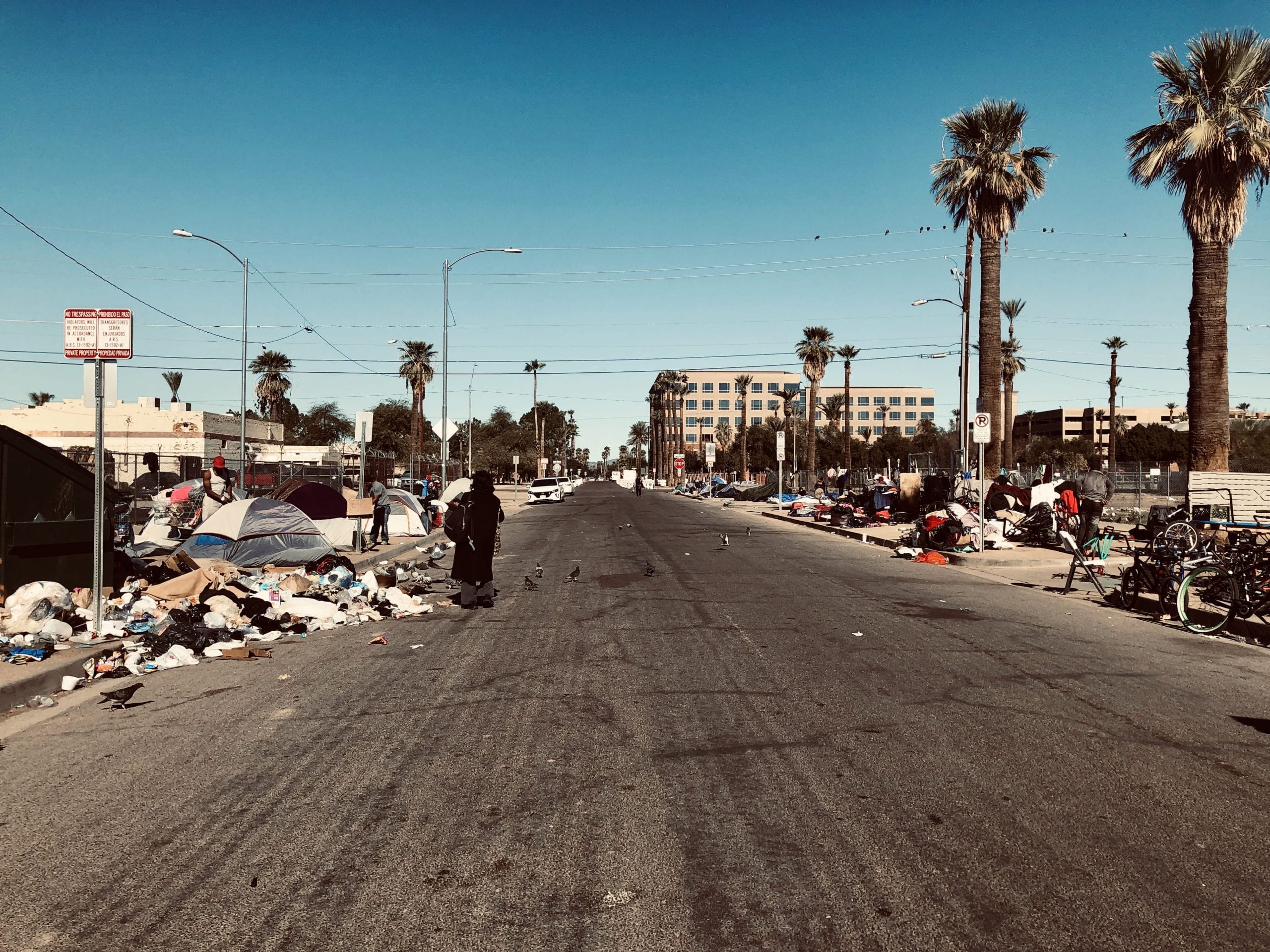 Some of the individuals camping just outside the Human Services Campus are barred entry from shelter services, due to behavioral issues, etc. Others choose not to use the shelter for personal reasons, but want to be close to the resources available on campus, like meals and restrooms. (Photo: Fara Illich)

For an individual or group looking to help, it might seem like a prime place to hand out meals to people in need. But there’s a growing movement to redirect those gifts, according to Teresa Hauer with the Healthy Giving Council and PHX C.A.R.E.S.

“For one thing, it’s a safety issue. There is a patrol dedicated to the Human Services Campus area, and they experience an increase in calls around the holiday season,” Hauer said. “There’s also the public health issue of feeding people on the street with no restrooms and no facilities.”

There’s also litter, and lots of it. In 2017, approximately 13 tons of trash were picked up by the City of Phoenix in the three-block radius around the Human Services Campus during Thanksgiving weekend.

Partially due to a growing concern over trash, health and sanitation, the Healthy Giving Council was formed the same year. It’s a coalition of residents, faith leaders, social service providers, local government officials, and individuals who have previously experienced homelessness.

Through outreach efforts, the goal is to promote healthy and sustainable giving year-round, not just during the holidays. The website also provides a list of ways to donate, volunteer and get plugged into ongoing programs.

If people are pulled to the streets through meals and other handouts, they may be less likely to engage with services, according to Samantha Jackson, who serves on the CASS and Maricopa Regional Continuum of Care boards, and is the senior director of BID services and operations for the Downtown Phoenix Partnership.

“The life expectancy of someone experiencing homelessness, especially for an extended period of time, is significantly lower,” Jackson said. “That’s why we try our best to get people into housing services – it’s about saving lives.”

It’s also about resources, according to Jackson. In addition to pulling people away from services, it costs a lot to provide the cleanup — money that could be spent on getting people into homes. 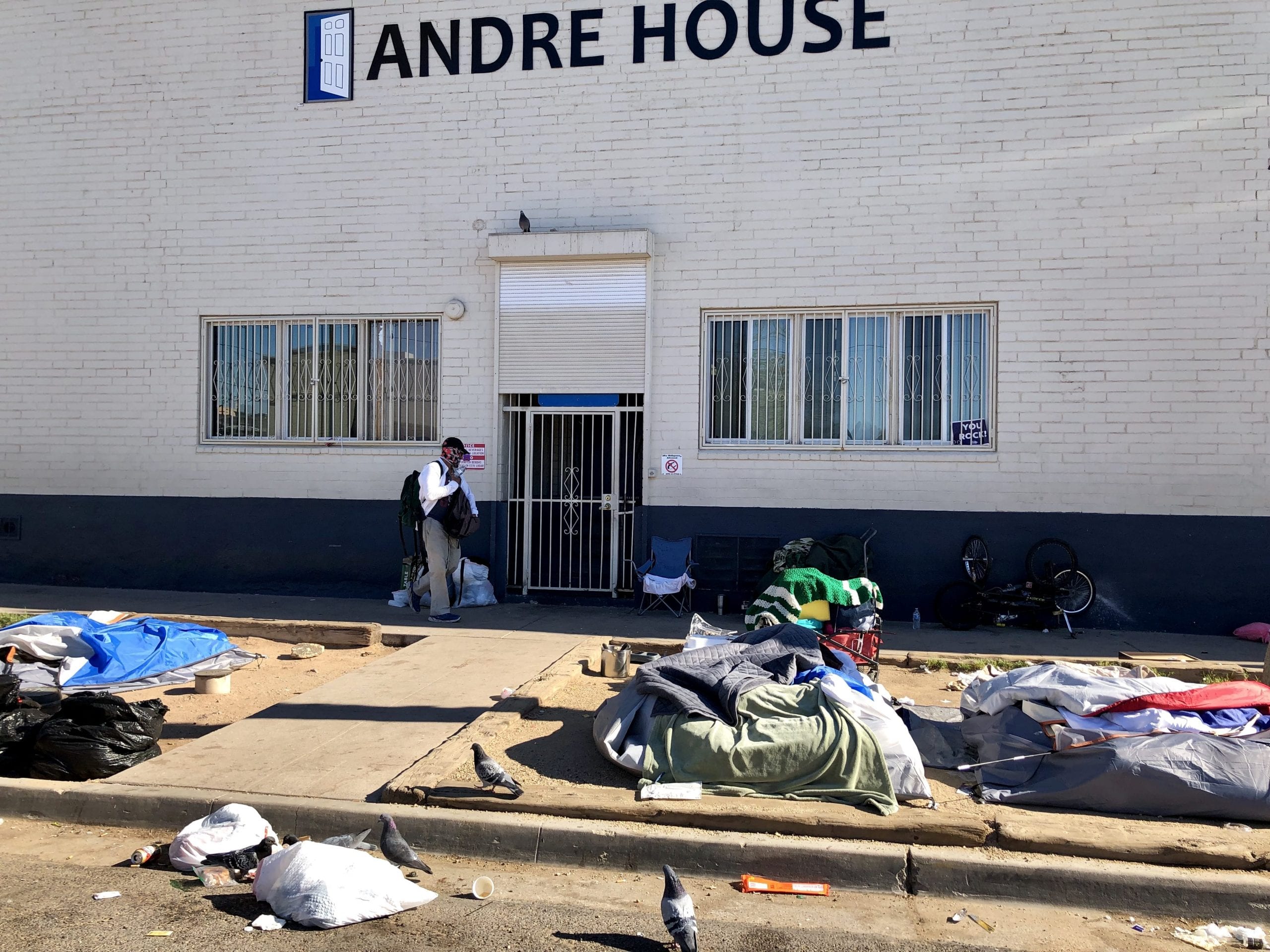 Custodians with the campus clean the surrounding areas on Tuesdays and Thursdays at a price tag of $1000 a week.

A number of sidewalk receptacles, including recycle bins and three large dumpsters, are maintained by the City with once-a-week pickup on Wednesdays.

By Tuesday, especially during the holiday season, the dumpsters are full or overflowing.

But the work of the Healthy Giving Council may be reducing that. In 2018, during the weekend of Thanksgiving — Thursday to Monday — the City collected approximately 8 tons, a 32 percent drop from the year prior.

“That could be attributed to a lot of different factors,” Hauer said. “But we’d like to think it’s because healthy giving is catching on.”

During Christmas, volunteers with the council plan go back out and talk to people handing out food. Some people are really receptive, according to Hauer, and some aren’t. But everyone’s heart is in the right place.