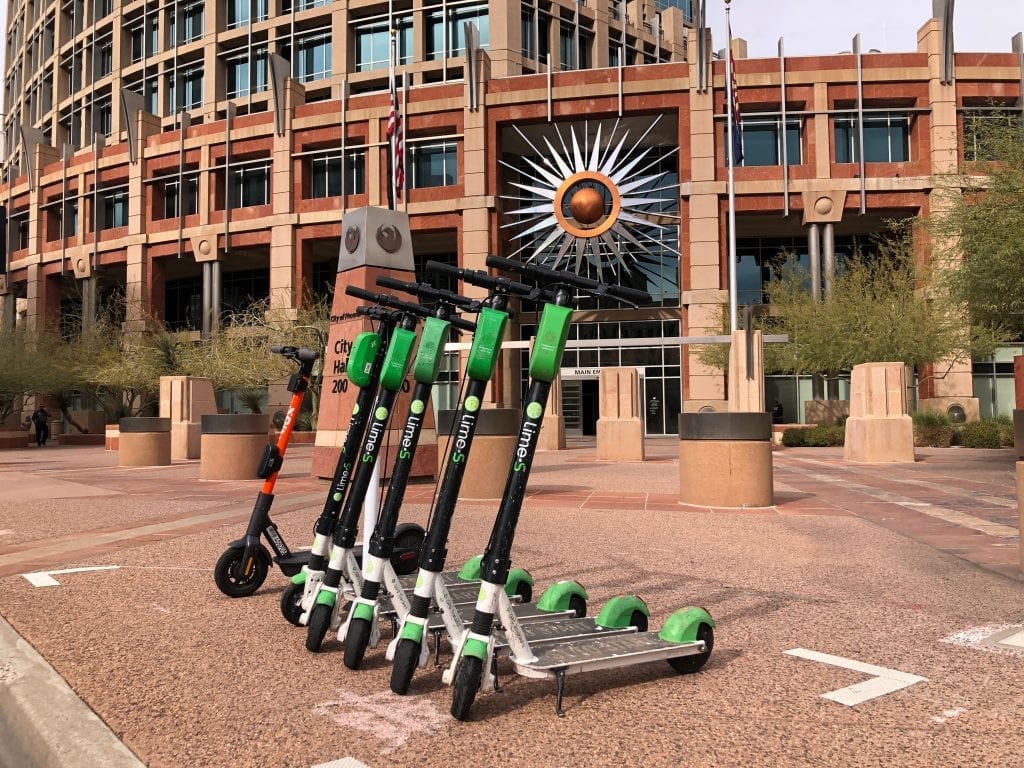 If you live, work or hangout in Downtown Phoenix, you’ve likely seen people riding scooters about town and scooters parked on street corners. That’s because we’re halfway through an e-scooter pilot launched by the City of Phoenix on Monday, Sept. 16. There are still three months remaining in the program, before the city makes its evaluation of whether or not to keep scooters.

The six-month pilot program basically gives the city a chance to do a trial run that allows companies to operate electric scooters in Downtown Phoenix through March 15, 2020.

The city will evaluate the program’s success in the first three months, and again at the end of the sixth months. Compliance of users and vendors as well as and community feedback will help the city determine whether to continue the program after the trial period is up.

Unlike in other local cities, e-scooters rented downtown must be parked in one of the nearly 400 designated parking zones — which are sectioned off with white poles.

Locations can be found in the scooter vendor apps, and by zooming into the city’s interactive online map. If you don’t park in one of these zones you won’t be able to end your ride (a.k.a. you’ll keep getting charged). 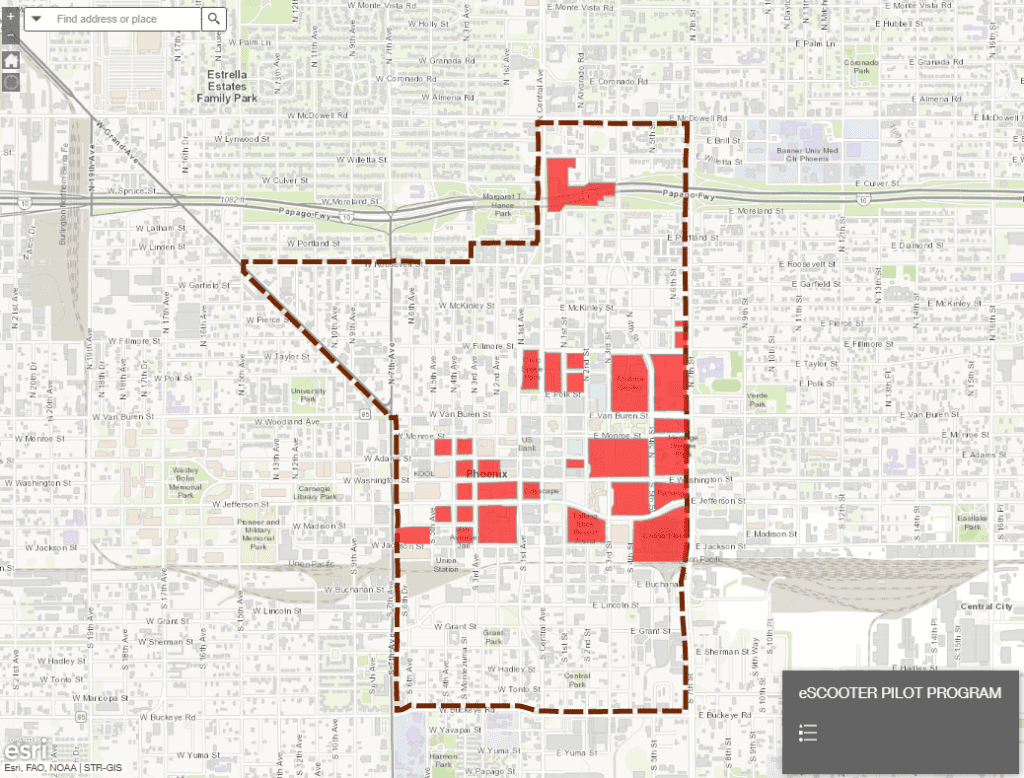 Where you can ride

The pilot program’s geographic boundary covers most of the area between Seventh Street and Seventh Avenue, from McDowell Road to Buckeye Road, with a triangular section to the west extending between Roosevelt Street and Grand Avenue to 15th Avenue. The scooters will slow down and eventually stop if you ride outside of these areas.

Where you can’t ride

Riding on sidewalks is prohibited, except when parking in a designated area (some parking areas are on streets, some are on sidewalks).

Several popular public areas within the program boundaries are considered “no ride zones” and are off limits to scooters. These areas are highlighted in red on the program boundary map. Some of the areas include the west side of Margaret T. Hance Park, Civic Space Park, Patriot’s Park at CityScape, Burton Barr Central Library, Arizona Center, Chase Field, school campuses and others. Scooters will slow down and eventually stop working if you ride into these areas. 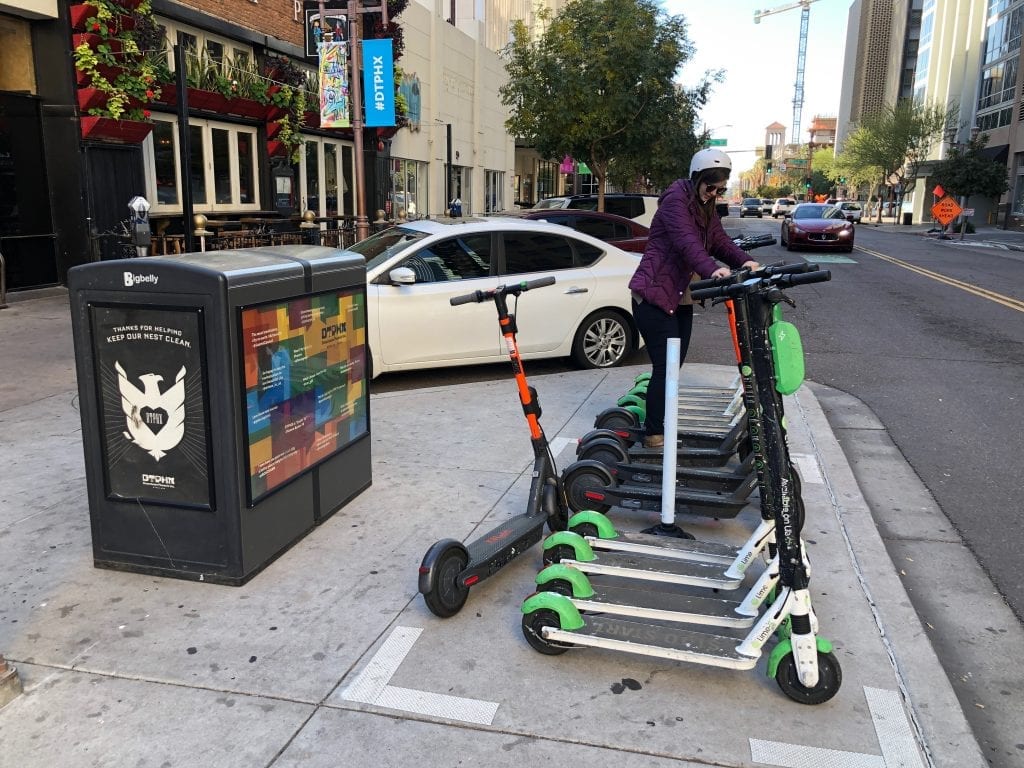 What riders need to know

• Riding on the sidewalk is prohibited; ride on the street or in bike lanes
• Park only in designated parking area​s or you’ll keep getting charged
• Obey all traffic laws​ including D.U.I.
• Ride only within the program boundaries (and avoid “no ride” zones)
• One rider per scooter
• Riders must be 18 or older and have a valid drivers license

• Wear a helmet (highly encouraged while not required)
• Always ride with both hands
• One person/rider per scooter
• Be aware of your surroundings
• Yield to pedestrians and other vehicles (cars, bikes, buses and light rail)
• Visit the city’s website for more information about the pilot program.

In the first three months of the program, an average of 4,435 trips were completed each week with scooters clocking more than 72,000 miles. 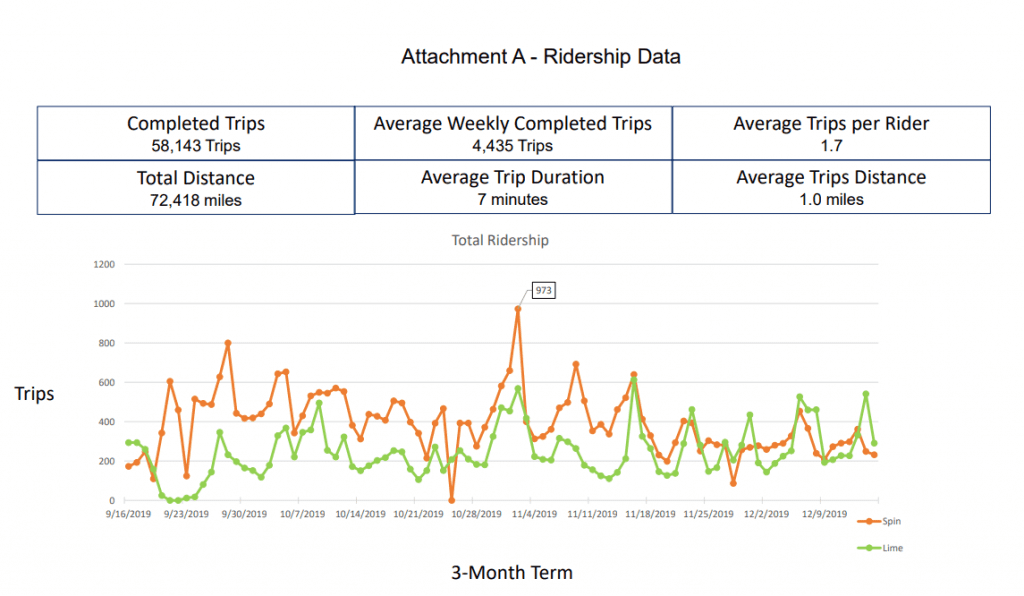 More than 72,000 miles have been clocked by scooters in the Downtown Phoenix e-scooter pilot program. (Image: City of Phoenix)

How the pilot program came about

When e-scooter companies joined the business leadership and advocacy organization Phoenix Community Alliance (PCA), they engaged with PCA’s Multi-Modal Connectivity Committee. The committee advocates for initiatives related to rail, bus, biking, walking, safe streets and more. It was during these meetings the need for a pilot program allowing scooters was identified. So, PCA worked closely with the scooter companies to make recommendations to the city on a pilot program.

Once implementation of the program began, the Downtown Phoenix Partnership began working closely with the City of Phoenix Street Transportation Department to help prepare downtown for this new transportation method.

The Downtown Phoenix Ambassadors are familiar with the program and will be trained by each scooter company on how to use their apps. Look for the Ambassadors in their signature orange “ask me” shirts or call 602-495-1500.

Got feedback on the program?

If you’d like to share your feedback on the pilot program, you can email scooters@phoenix.gov or call the e-scooter hotline at 602-262-7474.