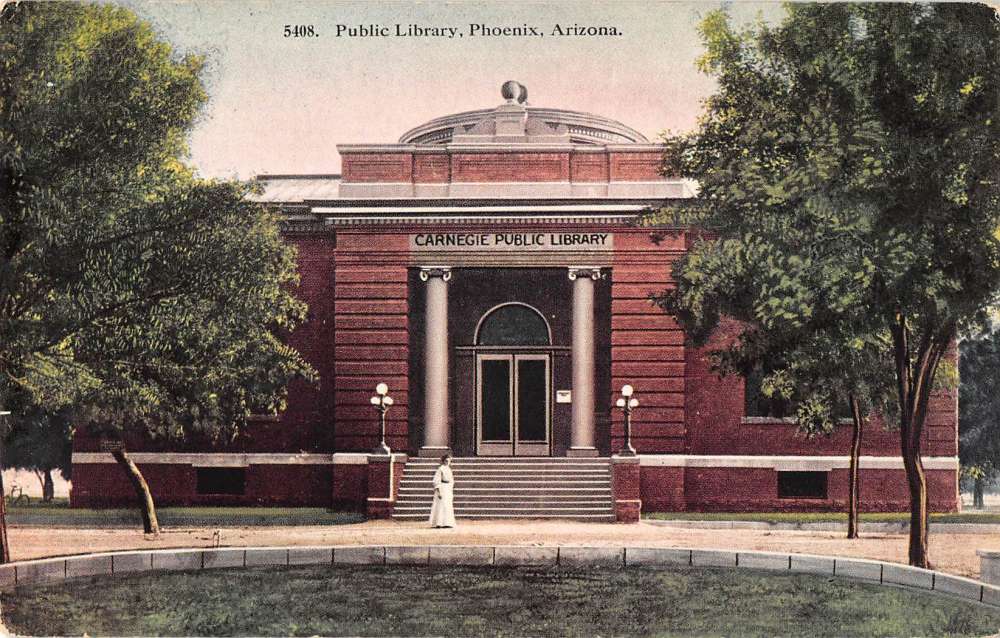 Located just west of Downtown Phoenix in the Capitol Mall neighborhood, the Carnegie Public Library still stands. Built in 1904, it was spearheaded by the Friday Club, a women’s literary group created for the intellectual and social development of its members. (Photo: historic postcard)

Over the course of time, women have cajoled, twisted arms, nudged, and then nudged harder. Then called not-so-complimentary names for doing so. In a recent series of talks I gave at the Beatitudes Campus, I labeled these women as “pushy.” But…they got things done.

Thanks to the many so-called “pushy” women in Phoenix history, we are able to enjoy libraries, art museums, history museums, hospitals, schools, and so many other things that most of us take for granted.

Let’s start with the origin of the Phoenix Public Library system.

The Friday Club began in 1897 with 12 women who were interested in getting together and discussing history. They selected such topics as the French Revolution, English history, the Bible, the Renaissance, the Balkans, Italy, and South America to name a few. 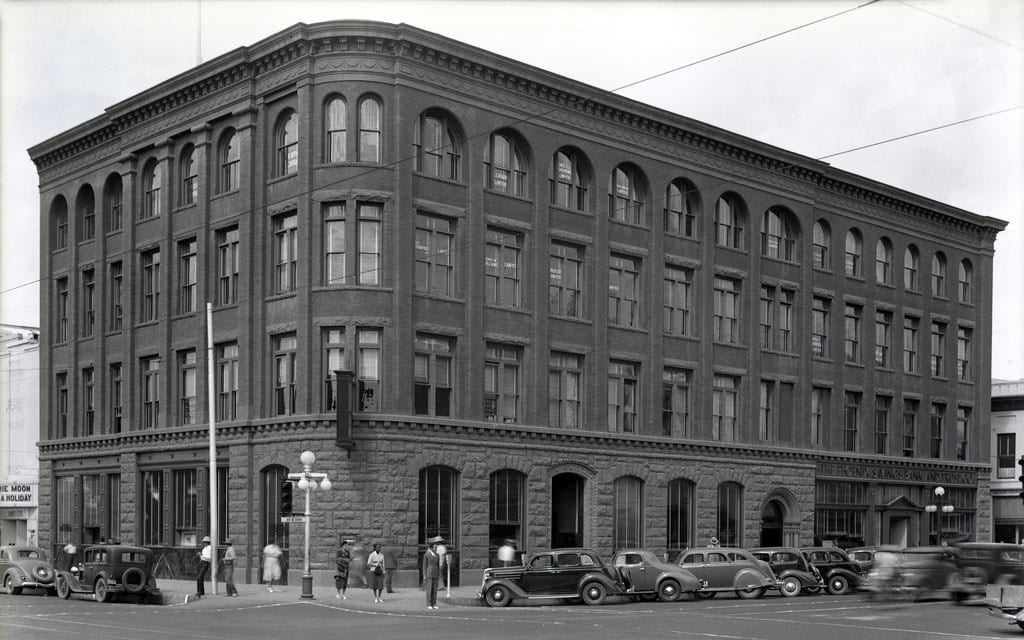 The Friday Club’s first library opened in 1898 in a couple of donated rooms inside the Fleming Building (pictured circa 1938), and quickly gained in popularity. Built in 1883 by James Fleming on the northwest corner of Washington Street and First Avenue where the Wells Fargo tower currently exists, the Fleming Building was razed in the ’80s. (Photo: McCulloch Brothers, Arizona State University Libraries)

“The club was only a few months old when the idea of starting a public library was broached and very quickly action was taken,” according to “The Story of the Friday Club, Being Historical Reminiscences.”

The Friday Club opened a library in 1898 with 1000 books, while still meeting regularly to discuss a variety of topics. Initially housed within a couple of rooms at the Fleming Building, the library was for the Friday Club’s use, but soon became widely popular with Phoenicians. Reading for pleasure was a commodity not everyone could afford. So the idea of borrowing books caught on.

Outgrowing the Fleming Building site, the very persuasive women of the Friday Club managed to obtain permission to use a room in the old City Hall in 1899. You see, these ladies were subtly working toward the city taking over the library. Rather clever weren’t they? 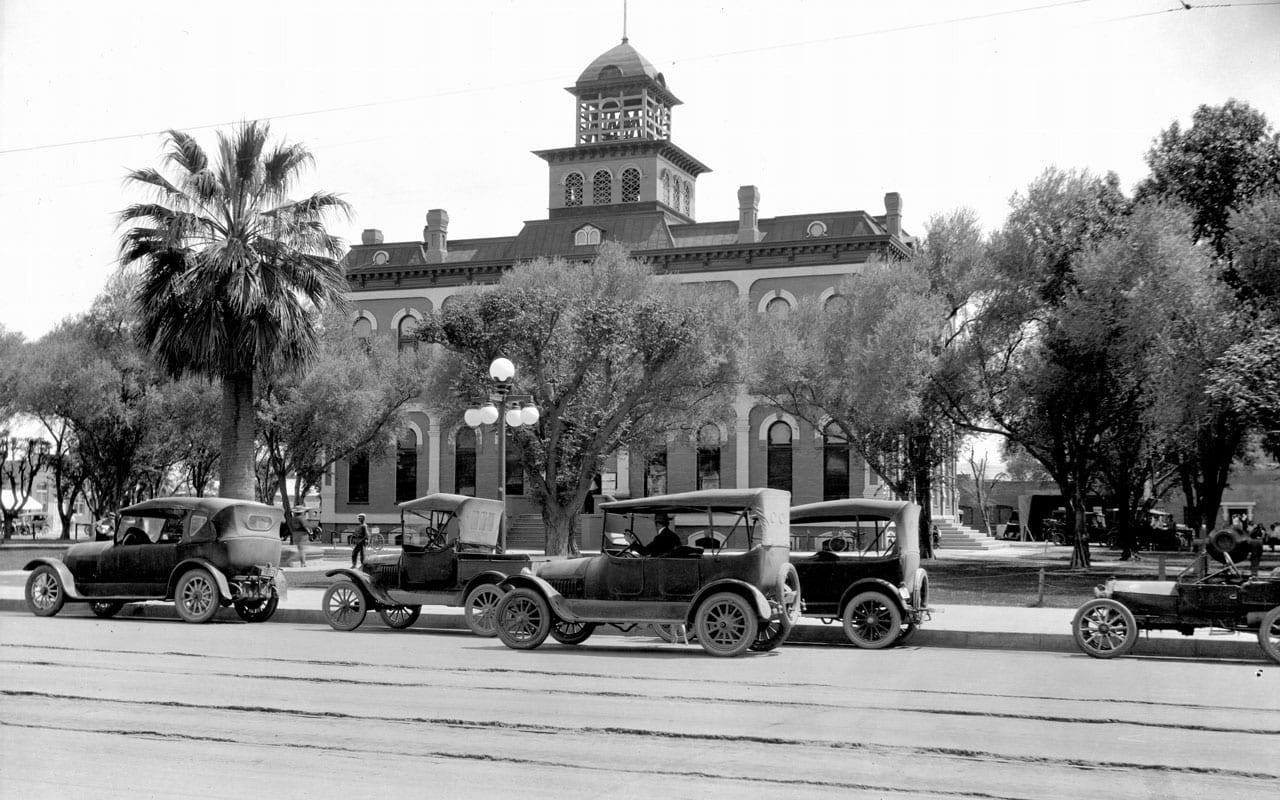 After a few years, the group thought Phoenix was library conscious, (they were tired of doing all the work of checking books out, re-shelving, and cleaning the room), and they arranged for a town meeting. At that time, the Friday Club turned the responsibility of the library over to the city.

Fortunately for us, the Friday Club and other boosters were instrumental in obtaining a $25,000 grant from Andrew Carnegie in 1904. It helped build the Carnegie Public Library at 1101 W. Washington Street, which opened February 14, 1908 with 7000 books.

With a population of 15,000 people at the time, Phoenicians checked out 17,000 books the opening year. Home to the Phoenix Public Library until 1954, the building still stands, but is currently not in use. 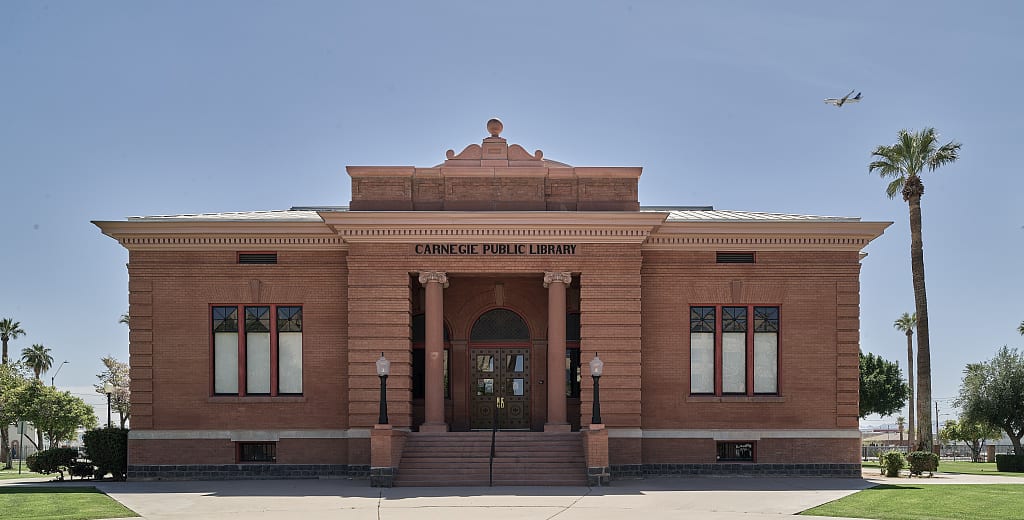 Located at 1101 W. Washington Street, the Carnegie was Phoenix’s main library until 1954. It is currently not in use. (Photo: Donna Reiner)

Another ambitious women’s group was the Woman’s Club of Phoenix. Founded December 5, 1900 as the Fortnightly Club, eight of the community’s most prominent women formed an educational study group similar to the Friday Club. Oh those information-seeking women. What grew was an organization that met every other week from October to June to study various topics including anthropology, art, education, and law.

When the women became interested in the national women’s club movement and voted to join the General Federation of Women’s Clubs, they changed their name to the Woman’s Club of Phoenix. Like the Friday Club, they were involved in obtaining the funds for building our Carnegie Library.

In addition to literacy, the goal of the Woman’s Club was “to place Phoenix on the art map.” 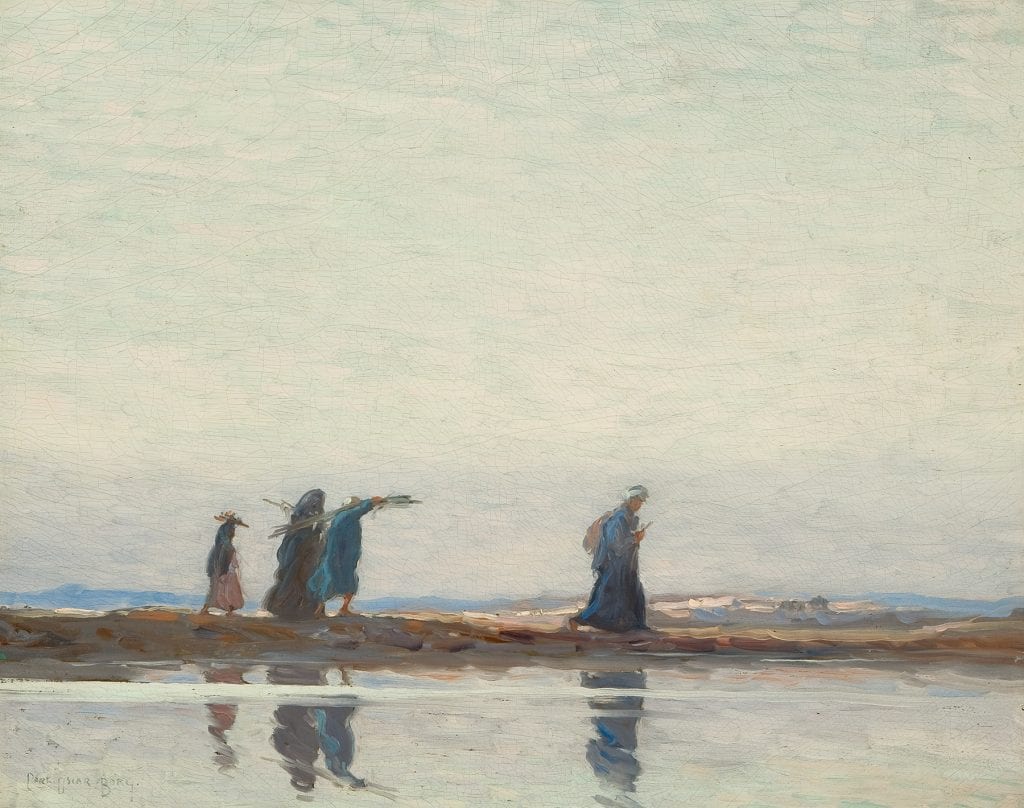 But first….they needed some art. The Woman’s Club of Phoenix was determined that the City of Phoenix needed to collect art with the ultimate goal of establishing an art center (it only took 45 years to establish the Phoenix Art Museum).

The first step was organizing an exhibition in January 1915, which led to the inclusion of an art exhibit in the State Fair for the first time that fall. A number of California artists were invited including Maynard Dixon, who spent a great deal of his time in Arizona. It was thought that the State Fair art exhibition would “be the greatest exhibition of its kind ever held in the Southwest.” 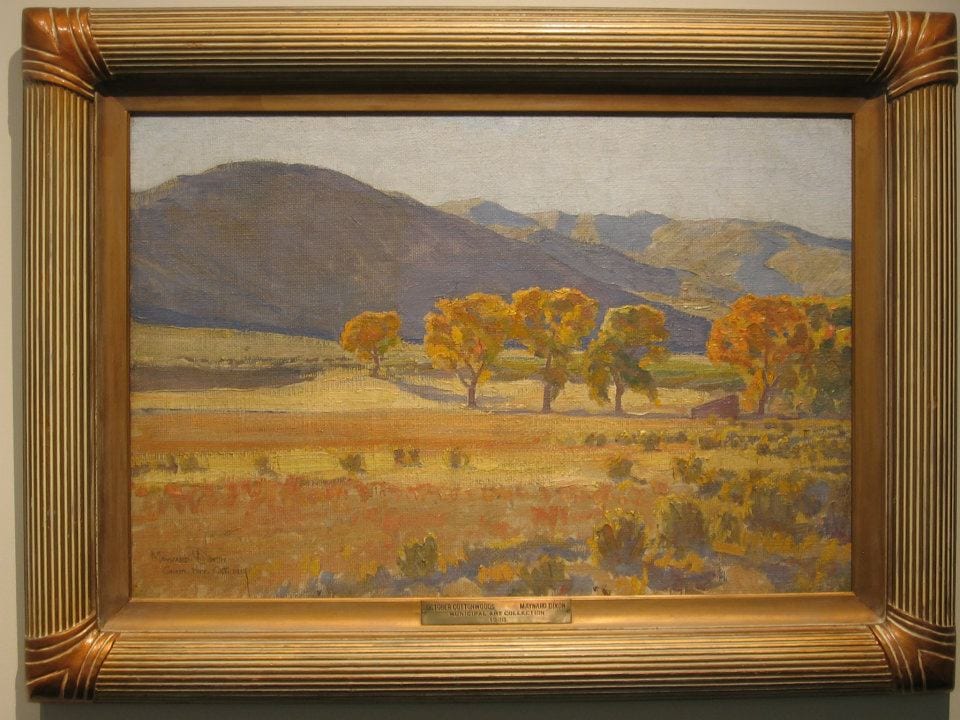 The 1920 painting “October Cottonwoods” by Maynard Dixon was acquired by the Woman’s Club of Phoenix and is now part of  the Phoenix Municipal Art Collection. (Photo: Donna Reiner)

But the problem still remained: How to purchase art and build a collection? The club coordinated with the local public schools for the elementary students to contribute a penny each. High school students were encouraged to give at least five cents and larger donations were solicited from the general public. The club estimated the cost of the first painting they would purchase in 1915 would be between $50 and $1000 ($100 in 1915 would be valued at approximately $2,487 today).

Having 13 works to select from, the club purchased “Egyptian Evening” by Carl Oscar Borg for $125. Cleverly, the Woman’s Club presented the bill to Mayor George U. Young and the Phoenix City Council, and they agreed to pay. Except for 1918, the Woman’s Club continued this method of yearly acquisition until 1931. 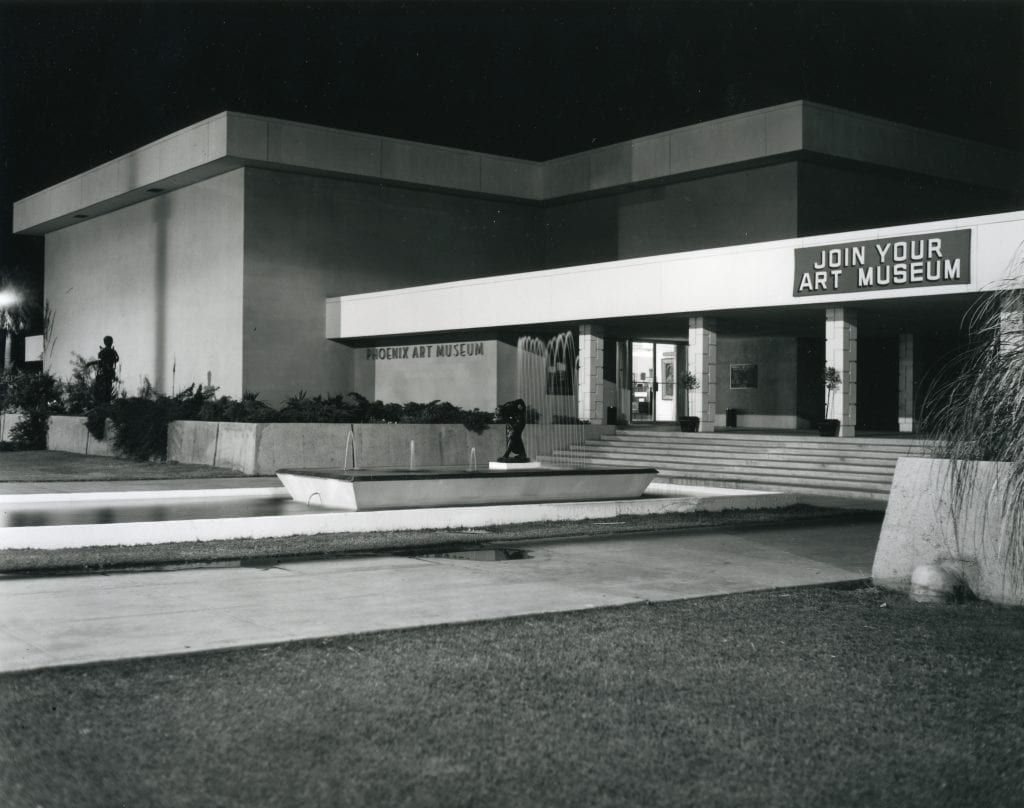 And thus, the Phoenix Municipal Art Collection grew one piece at a time.

As for a place to display the art, construction began on the Phoenix Civic Center in 1957 on the northeast corner of Central Avenue and McDowell Road, and the Phoenix Art Museum opened in November 1959.

Significantly shaping the identity, evolution, and cultural heritage of Phoenix, we should be thankful for these “pushy” women who got things done.

About the author. Donna Reiner has spent more than half her life in Arizona and cannot think of any other place to live. A historian and writer now, she’s also a trained classical musician. A jigsaw puzzle fanatic since the age of two, she usually completes at least a 500-piece puzzle every couple of days for relaxation. She takes longer with 1000 pieces.