Players who get four across, in a row, diagonal, or a two-by-two box (4 images) anywhere on the tabla get a free sticker sheet. Fill the entire card to get a commemorative enamel pin. (Photo: Fara Illich)

In partnership with the The Sagrado, a renowned community arts organization and gallery in South Phoenix, DPI collaborated with 11 local artists and illustrators to create a set of downtown Lotería cards – colorfully-illustrated posters symbolizing dozens of local businesses. The event is sponsored in part by Valley Metro.

To play the downtown version, players pick up a “tabla” (Bingo-like playing card) at any participating downtown business, or from a DTPHX Ambassador. Each tabla will feature 16 downtown businesses depicted Lotería style. Players must find the card that corresponds with the business (the artist-designed poster will be visible from the exterior), go inside, and get a DTPHX sticker from an employee.

Get four in a row (or more) — and that’s Lotería. Prizes include custom stickers and enamel pins designed by Hamster Labs. 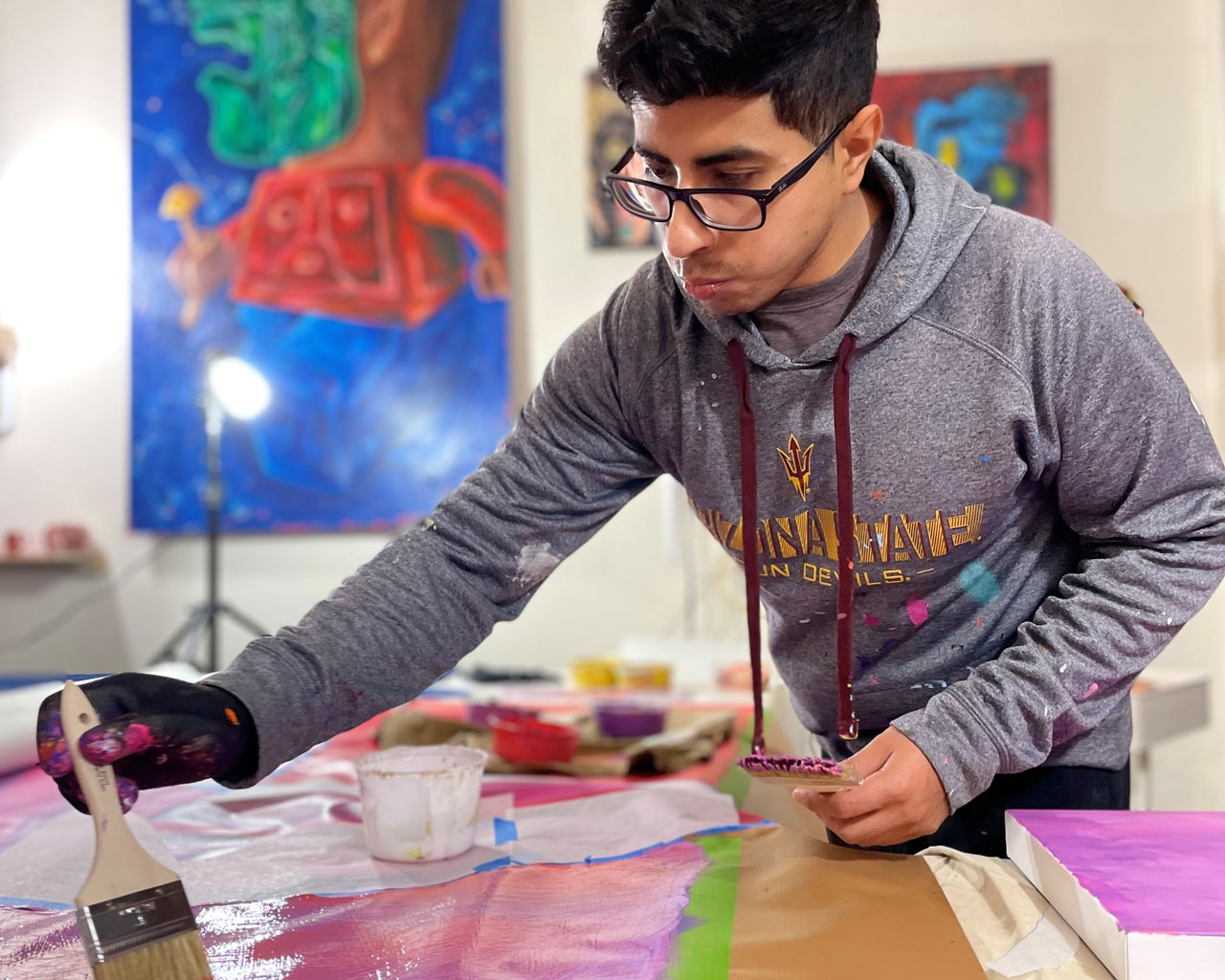 Edgar Fernandez is a 31-year-old resident artist at The Sagrado, and one of 11 featured artists in DTPHX Lotería. (Photo: Edgar Fernandez)

“That game was always the center of family gatherings, like after a nice lunch or dinner, we’d bring out the Lotería,” said Edgar Fernandez, a 31-year-old resident artist at The Sagrado. “I was very inspired to create something that influenced me very early on. It’s nostalgic, and brings back fond memories from when I was very young.”

Lotería has been played throughout Mexico for hundreds of years. Similar in concept to American Bingo, it uses 54 widely-varied characters and symbols of Mexican culture on a deck of cards instead of numbered ping-pong balls.

DTPHX Lotería was designed as a fun way to discover new places, while celebrating the art, history and culture of Downtown Phoenix. 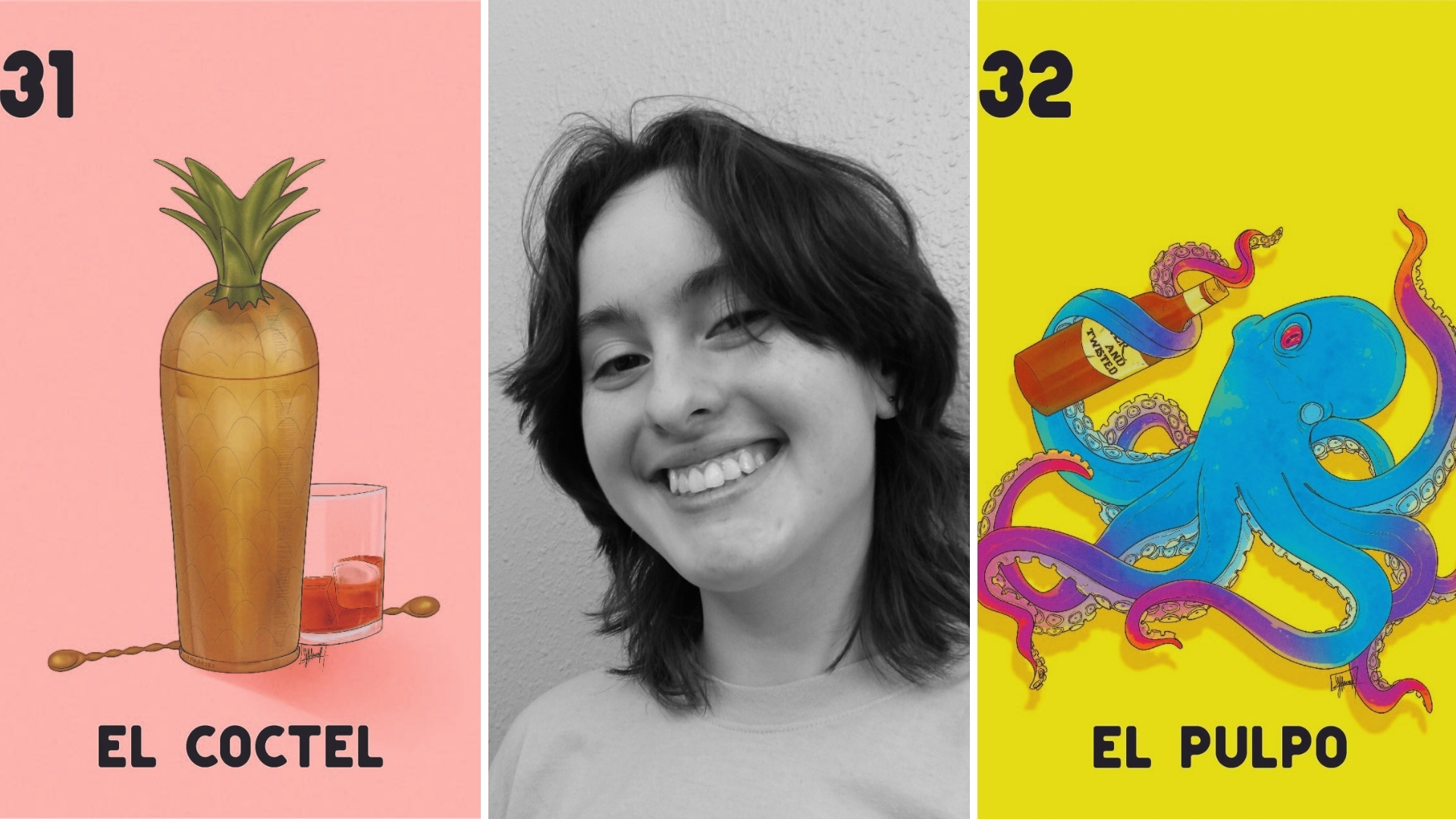 Jordan Hazekamp is a 17-year-old artist and high school student, and one of 11 featured artists in DTPHX Lotería. (Photo: Jordan Hazekamp)

Established five years ago, The Sagrado uses arts, culture and design to create more equity and ownership for creatives and artists, according to Gomez. Through partnerships with local nonprofits and the business community, like this project, he said Phoenix artists can have have more ownership over how the city develops, how it looks, and how it grows.

One of the Lotería artists, Jordan Hazekamp, is just 17 years old, with aspirations to study digital arts and effects after high school. She initially became involved with The Sagrado through a Vans shoe design contest, where she was one of the winners.

“I was really interested in the concept of doing a Lotería card” she said. “I thought it would kind of be an interesting challenge, especially with the use of the colors and style.”

Assigned to Bitter & Twisted Cocktail Parlour and Little Rituals, two places she’s never been due to her age, Hazekamp found inspiration “on the websites, looking for interesting things that represented the businesses,” she said.

“My favorite part was the use of all the colors,” she said. “I looked at a lot of reference images and thought it was really interesting how the colors popped out and the way they came together.” 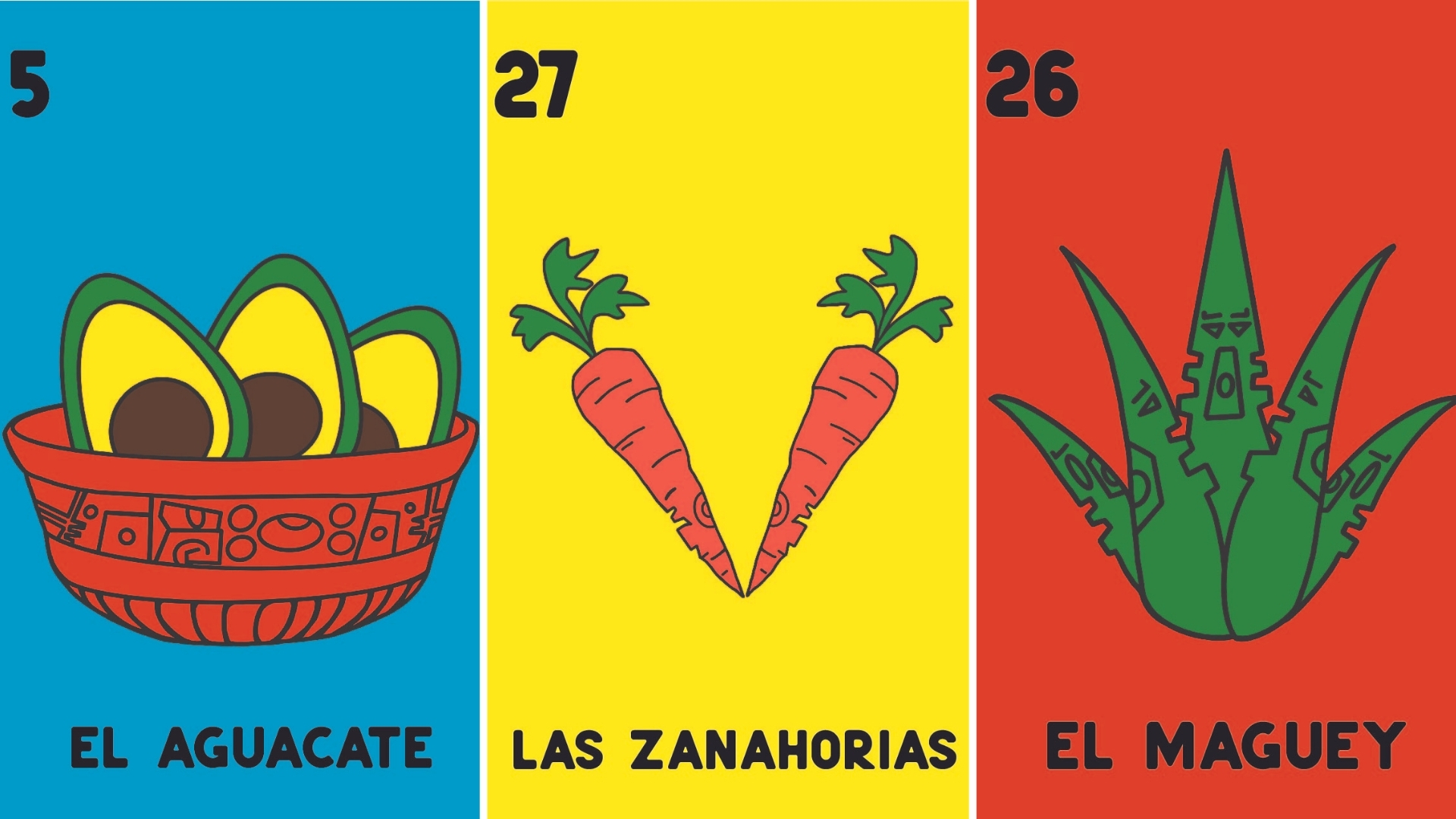 For Edgar Fernandez, he leaned into his Purépecha, Mexican and Chicano background.

“My artwork is composed from various influences, learning from cartoons and anime early on, then growing to graffiti and urban art, then learning from ancestral art — and kind of composing all of that together,” he said.

When the opportunity to work on this project came up, he jumped at the chance.

“I was like ‘this is a perfect moment for me to express myself with my art, my style, through Loteria cards,'” he said. “That playfulness let me explore and have fun with it.”

On Saturday, Oct. 16 from 3-5 p.m., a Loteria Showcase at the Hotel San Carlos’ Ghost Lounge will feature artwork from all 11 artists. Players can also come to the event to claim their prizes, and enjoy food and drinks by Centrico.

“Our goal is to create a quality way of life in our community and in our city,” Gomez said. “I would like to see Loteria, and what it’s doing for downtown, continue for many years to come.”