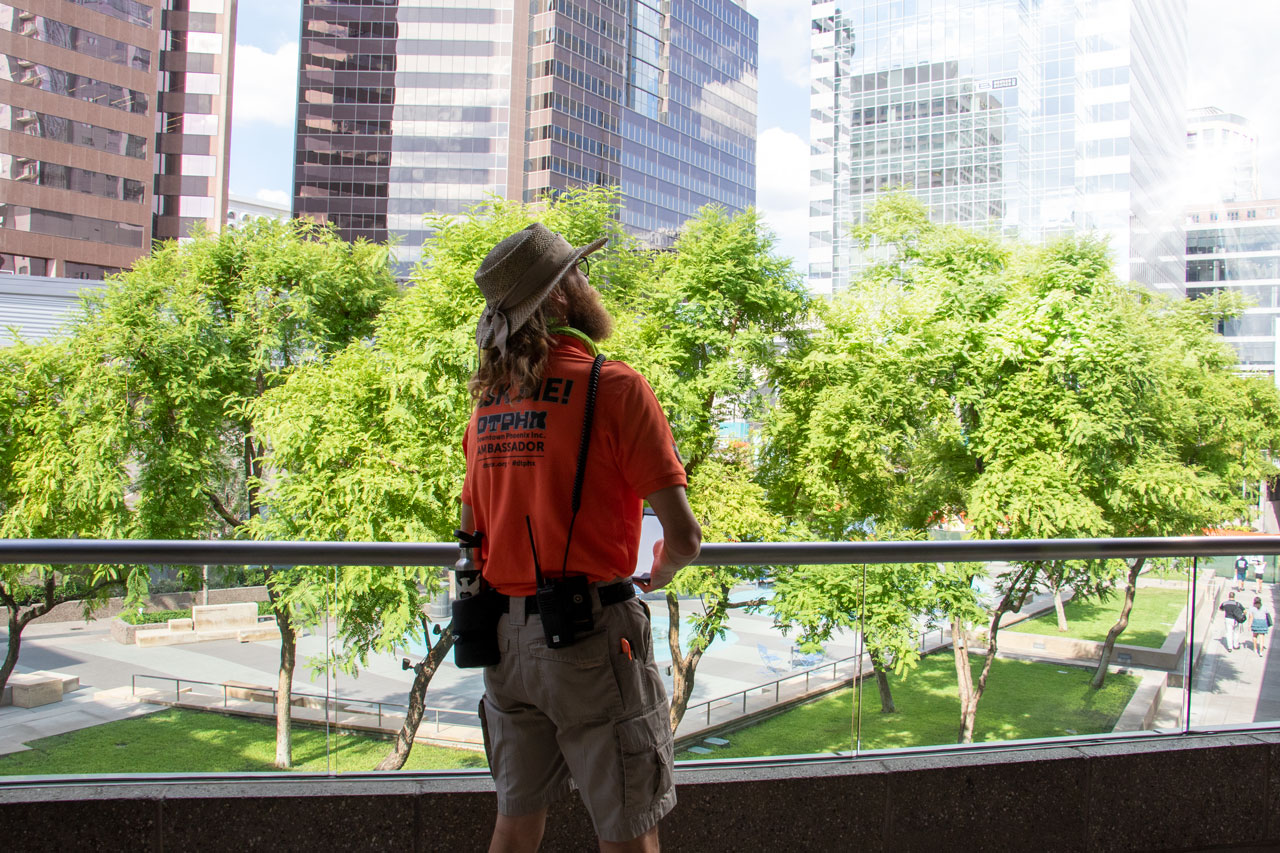 Hans Hughes, a 43-year-old Downtown Phoenix Ambassador and beloved community member, passed away on Tuesday after a serious bike accident involving a suspected drunk driver. In the wake of this tragedy — there has been an outpouring of love, support and emotion by the community.

As a member the Downtown Phoenix Ambassador program since 2009, and a proud resident of the Garfield historic neighborhood, Hughes touched the lives of so many.

In an Instagram post on Wednesday announcing his death, hundreds of people have shared their thoughts and memories, calling him a “legend,” a “fixture,” a “downtown institution,” someone who “loved and served the community,” a “kind-hearted soul,” “always happy helping others,” “using small interactions to make a big impact,” and having “a positive energy that so few have.”

To celebrate the life and legacy of Hans Hughes, a community candlelight vigil will be held in his honor on Saturday, Sept. 25 at Heritage Square, hosted by Downtown Phoenix Inc.

During his 12 years as an Ambassador, he assisted more than 38,400 people — offering tours of the neighborhood, jumping car batteries, providing umbrellas in the rain, offering restaurant recommendations, a friendly wave, a smile and so much more.

“Some people just show up, but Hans was always present – 100 percent,” said Lisa Banish, Ambassador program manager. “His motto was ‘creating memorable moments and experiences for people.’ Being an Ambassador is more than giving directions or being at an event, it’s about all the little things. It was so natural for him, that’s just how he was. He took so much pride in downtown and in his job.”

Known for his smile and booming, broadcast-worthy voice, Hughes truly embodied the spirit of downtown. He loved gardening and the desert. He promoted bike culture, sustainability and urbanism. He was passionate about the local arts and DJ scenes. But most of all, he loved helping people.

“He never faked enthusiasm or curiosity or kindness,” said R.J. Price, chief marketing officer for Downtown Phoenix Inc. “It was hardcoded into his DNA. It’s as if being an Ambassador and a steward for this city was the role he was born to play.”

On the night of Friday Aug. 20, he was riding his bike home from work when he was struck by a motorist near the corner of First and Fillmore streets. The driver stayed on the scene and was arrested on suspicion of drunk driving. Now that it has become a fatal collision, the charges will be upgraded, according to police, and the investigation is ongoing.

Hughes was taken to Banner University Medical Center Phoenix, and succumbed to his injuries on Tuesday, Sept. 21.

Bike safety and walkability have always been — and will continue to be — organizational priorities for the Downtown Phoenix Partnership, according to Devney Preuss, president and CEO of Downtown Phoenix Inc.

“In addition to improving pedestrian and bicyclist safety in downtown, we can all continue to care for and be kind to one another,” Preuss said. “Downtown is special because the people who live, work and learn here are also committed to making it a better place. Hans was the model example of this, and if we can all continue to care about our neighbors and contribute to the greater good, that’s one of the best ways we can honor him.”