Mapping Our Way To Love: A Tribute to Hans Hughes 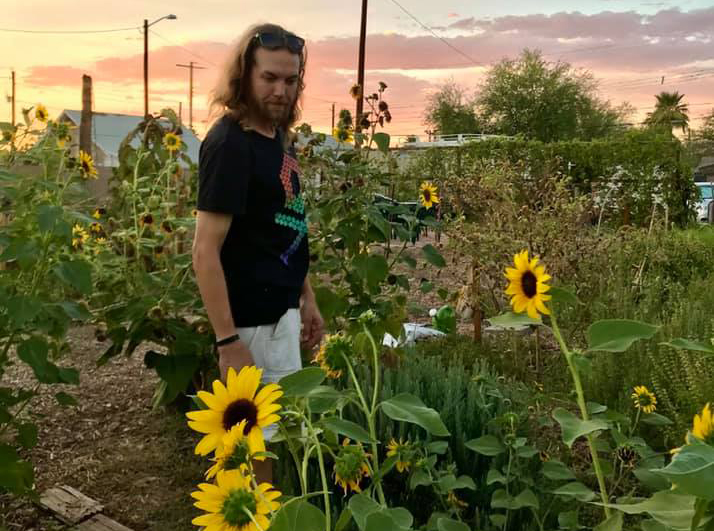 I’m reading a book right now, “The Map of Consciousness Explained,” by Dr. David R. Hawkins. It describes a scale of consciousness that begins at Level One, “Existence,” and travels to “Enlightenment” at 1,000. Think of one as the protoplasm of a single living cell and 1,000 as Buddha or Jesus.

In the book, Hawkins explains that 85 percent of the planet resides under Level 200, “Courage.” As we travel along the map to Enlightenment, we reach the level of “Love” at 500.

Level 500 is rare. In Hawkins’ estimation, one person out of 250 resonates with Love. “Love is unconditional kindness to all persons, things, and events without exception,” he says.

I knew a human who operated at Level 500 Love, and his name is Hans Hughes. I was blessed to work with Hans for more than a decade. He served as an Ambassador to Downtown Phoenix.

The mission of the nonprofit we worked for was to revitalize downtown, and as an Ambassador, it was Hans’ job to make downtown feel friendly and memorable.

He spoke to anyone walking around — visitors, residents, students, downtown employees, and so on. He greeted and served every person he came into contact with for 12 years, often using his booming baritone voice to exclaim, “Welcome to Downtown Phoenix folks!”

In August of 2021, as Hans was riding his bicycle home one night after work, he was struck by a motorist suspected of drunk driving. And while he survived for a few weeks, he ultimately succumbed to the damage that was inflicted on his body.

Another senseless, avoidable tragedy. The sort of loss that we lament as “too soon,” and wonder, “why this beautiful soul?”

Hans was different. Back then I often remarked, “His brain is wired a bit differently.” I know now, it wasn’t a different brain, it was a different heart.

Not everyone who worked with Hans understood him. If we were learning about a big event coming downtown, Hans would raise his hand the most and ask the most questions.

The team wore two-way radios and when he would speak, some would turn down the volume to subdue his booming voice.

He worked the night shift, which some felt was the worst shift. Didn’t matter to Hans, he’d search for people to help.

Over the years, when people asked me what I did for work and I mentioned downtown’s orange-shirted Ambassadors, some would stop me mid-sentence and with surprised eyes say, “Hey! I think I know one of your Ambassadors — his name is Hans!” And with a big smile, I’d nod, “Yep! That’s us!”

They’d regale me with their stories of meeting Hans. That’s because when you met him — if you paused long enough to park your busyness — you’d sense the Love radiating from him to you. It was genuine. It was a gift.

As the person who ran the Ambassador program in Phoenix for 14 years, honestly, I hardly heard any other stories shared in that way about other members of the team. Don’t get me wrong, I heard plenty about the great service Ambassadors provide, but no one did it like Hans, with the same consistent selflessness, zeal and care.

Hans had a heart many of us don’t recognize, let alone understand. For Hans, he provided Love every day regardless of who returned the Love; regardless of how full his Love tank was that day; regardless of whether he had $2 or $2 million dollars. Labels had no meaning with Hans.

In honoring him, my heart feels the magnitude of this Love more fully than my brain can formulate the words to describe it.

Hans radiated Love that glows, like a trusted nightlight in the darkest of rooms. It’s steady, like a rescue dinghy making its way through stormy waters to save you. It’s soft and magical like the fuzzy dandelion seeds carrying a wish on the wind.

We were a better world with Hans physically in it. In the aftermath of this loss, I hope many of us find our way to Level 500 Love. Godspeed.

About the author: In addition to running the Downtown Phoenix Ambassador program for a decade, Samantha Jackson aided the organization in public safety, homelessness solutions, mobility, community engagement and event production. Her role with the Downtown Phoenix Partnership eventually evolved into senior director of strategy and community affairs, and she now works as the deputy director for the Downtown Mesa Association.