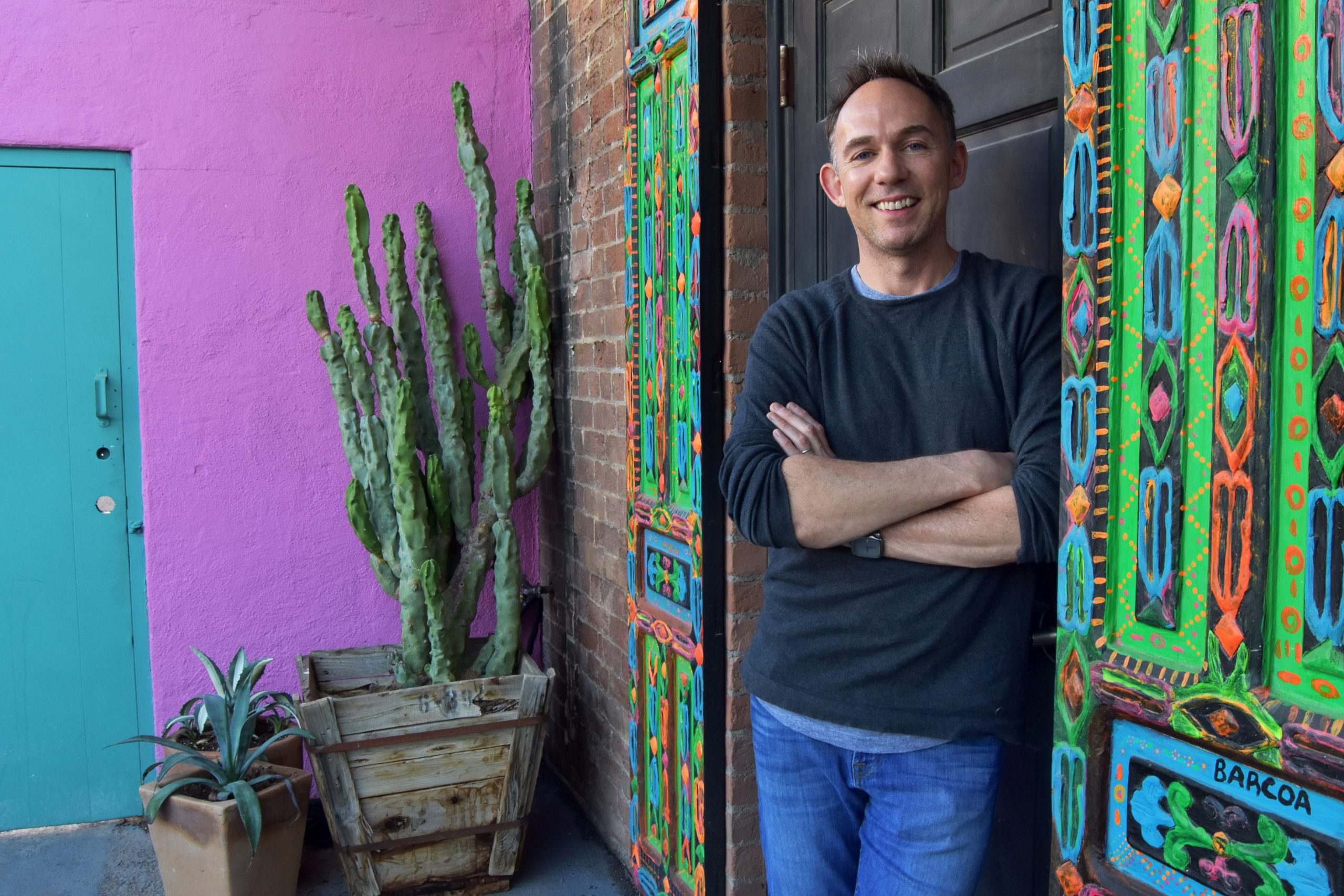 The founder of the Phoenix Pizza Festival and Arizona Taco Festival, David Tyda, along with his business partner Ryan Oberholtzer, are on the cusp of opening a tequila and agave spirit bar named BARCOA, located in a historic building in Downtown Phoenix.

Despite orchestrating some of the most notable local festivals in recent memory with thousands in attendance, Tyda said there was always a degree of separation between him and the attendees.

For his part, Tyda didn’t realize the deficit until he actually interacted with his customer base over the summer. He initially opened as a bottle shop while working on finishing the bar.

“People will come in and they’ll taste a few things and I try to open up their mind,” Tyda said. “It’s more intimate and both of us walk away with a memory. I get emails back saying, ‘That was so fun. We just spent 45 minutes together and I learned a ton.’”

Back in 2019, Tyda experienced some growing pains to reach this moment. He had recently sold his stake in the successful Arizona Taco Festival and then fell into a meditative “taco depression.” He enjoyed the logistics of festivals but sought more stability. He knew he wanted to open a permanent business, preferably a bar, but nothing concrete beyond that.

As he navigated what he wanted to do next, he dug deep and eventually landed upon an answer that not only united his love of tacos, but also the pastime of consuming agave spirits.

“I drink a lot of tequila and mescal, and every time I drink it, I go to find out more, whereas if I drink a wine, all I care about is if it tastes good,” he said.

Through his research, he found himself captivated by the tradition and skills of agave spirit production handed down from one generation to the next, which is unique by region. 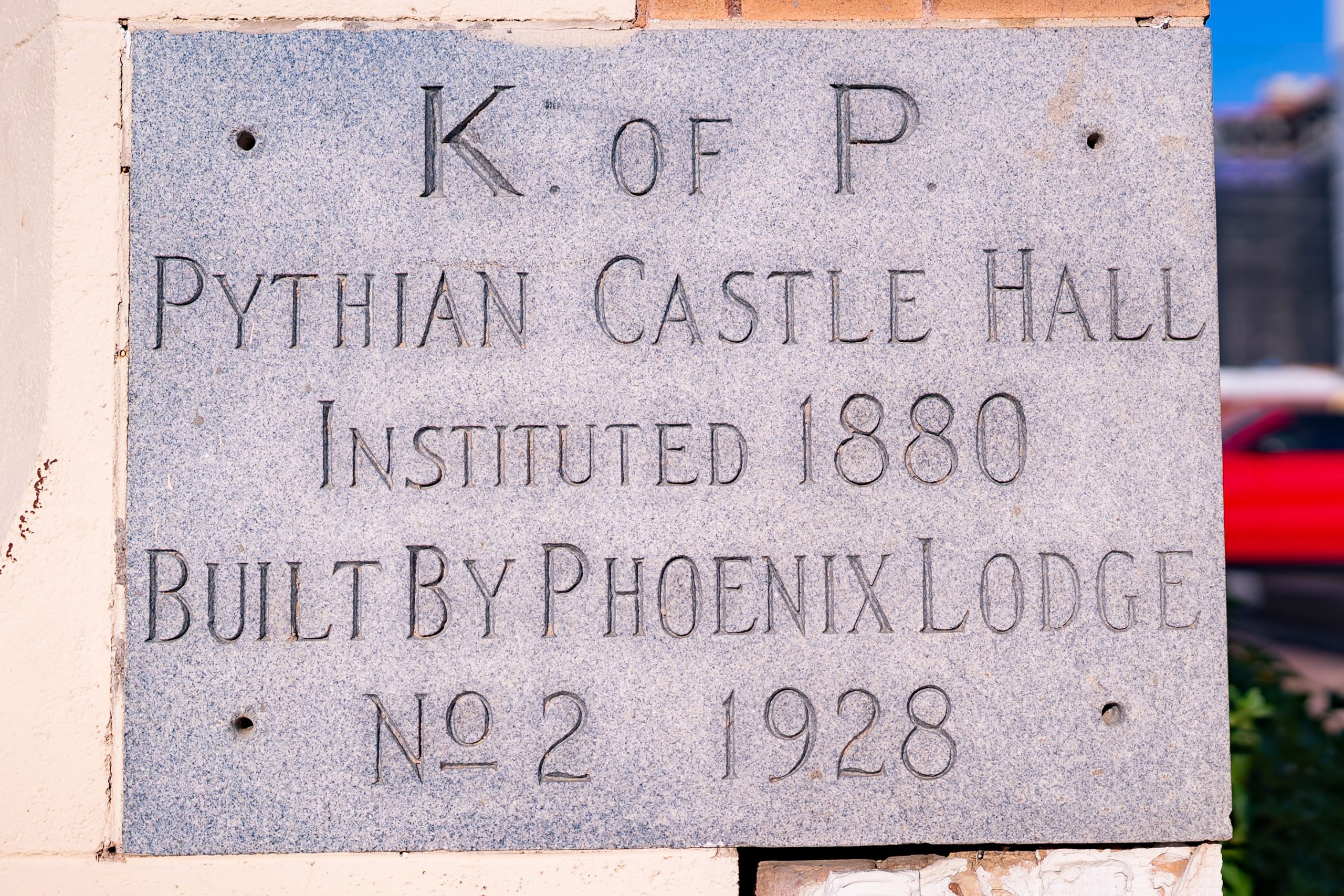 The plaque denoting BARCOA’s former life as the Knights of Pythias Building, when it was first designed by Lescher & Mahoney. (Photo Courtesy of David Tyda)

Tyda is serious about his spirits, but BARCOA started as a joke.

While Pemberton PHX was under construction as a culinary, shopping and entertainment venue, he saw the 200-square-foot concrete basement. He joked about opening a literal speakeasy there, deliberately running afoul of the law, selling tequila shots for cash without a license.

He repeated that musing to Oberholtzer, the owner of the Mexican restaurant Provecho, who mentioned a similar space he scouted for a possible tequila bar. That space would later become BARCOA. 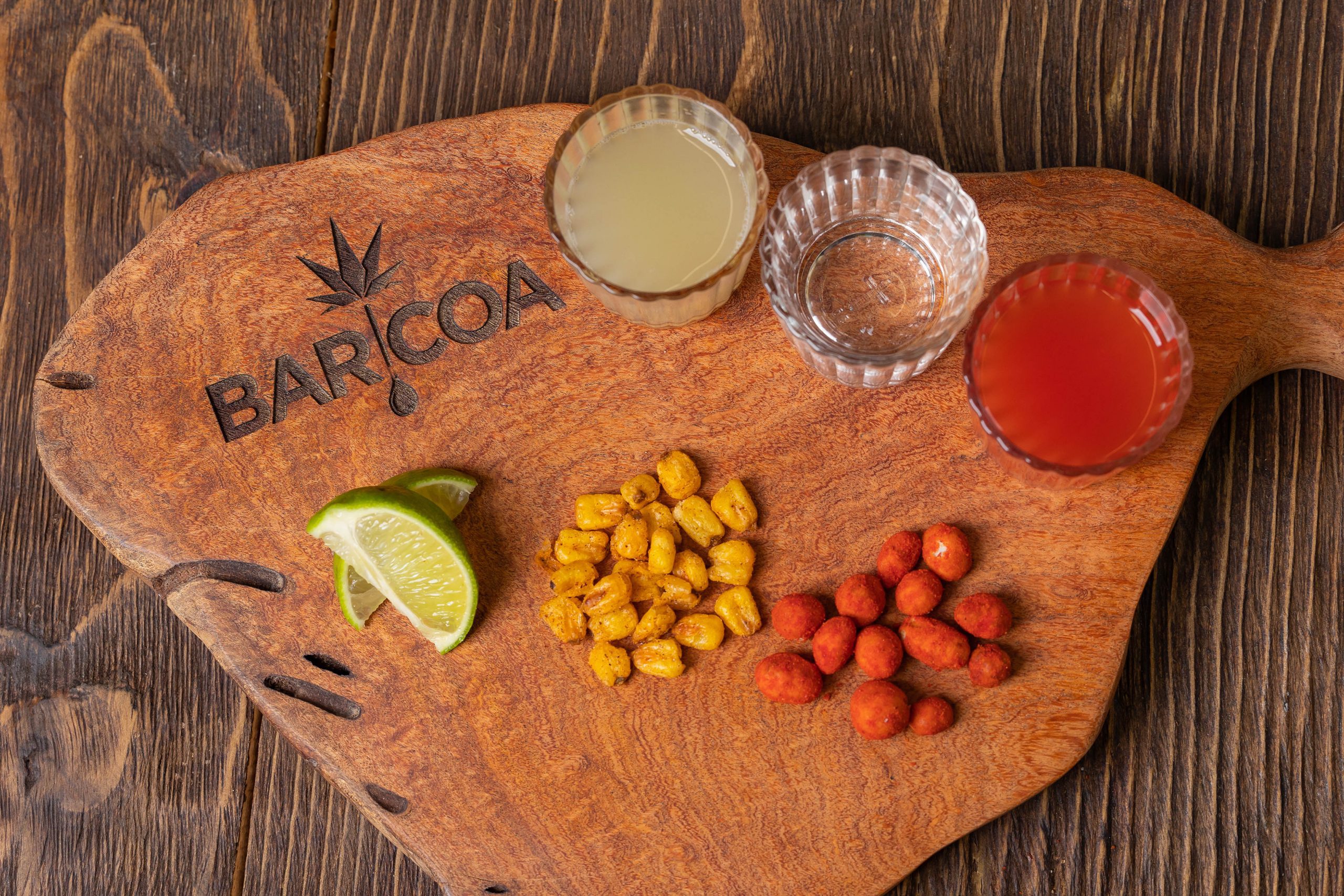 A bandera platter with the BARCOA logo, which integrates the ‘coa’ tool in the name. (Photo Courtesy of David Tyda)

Designed by Lescher & Mahoney, the 1928 Knights of Pythias Building (and one-time hardware store), located at 829 N. First Avenue, immediately felt right when Tyda explored its interiors – an intuition later affirmed by his wife.

“I brought my wife here and she is not a risk taker at all and when she saw the basement she said, ‘You gotta do this, this place truly wants to be a bar,’” Tyda recounted.

Work began transforming the one-time hardware store into a bar – while remaining site-sensitive to the structure’s footprint, which was on the National Register of Historic Places. A large rectangular hole, just aft of the cantina entrance, was slotted for the steel staircase leading down to the basement bar. Then they carved out a section of red brick wall facing the alley, which was not part of the original building, and installed a rolling garage door to open for food trucks.

The “Coa” of BARCOA refers to the tool used to cut the leaves off the agave plant before fermentation, which would be available for purchase in a hardware store.

Eventually the plan is for the ground-floor cantina to open seven days of the week, while the literal black-and-white basement bar opens four days and nights a week. A private tasting room will be in the back for those who want the most intimate of spirit tasting experiences. 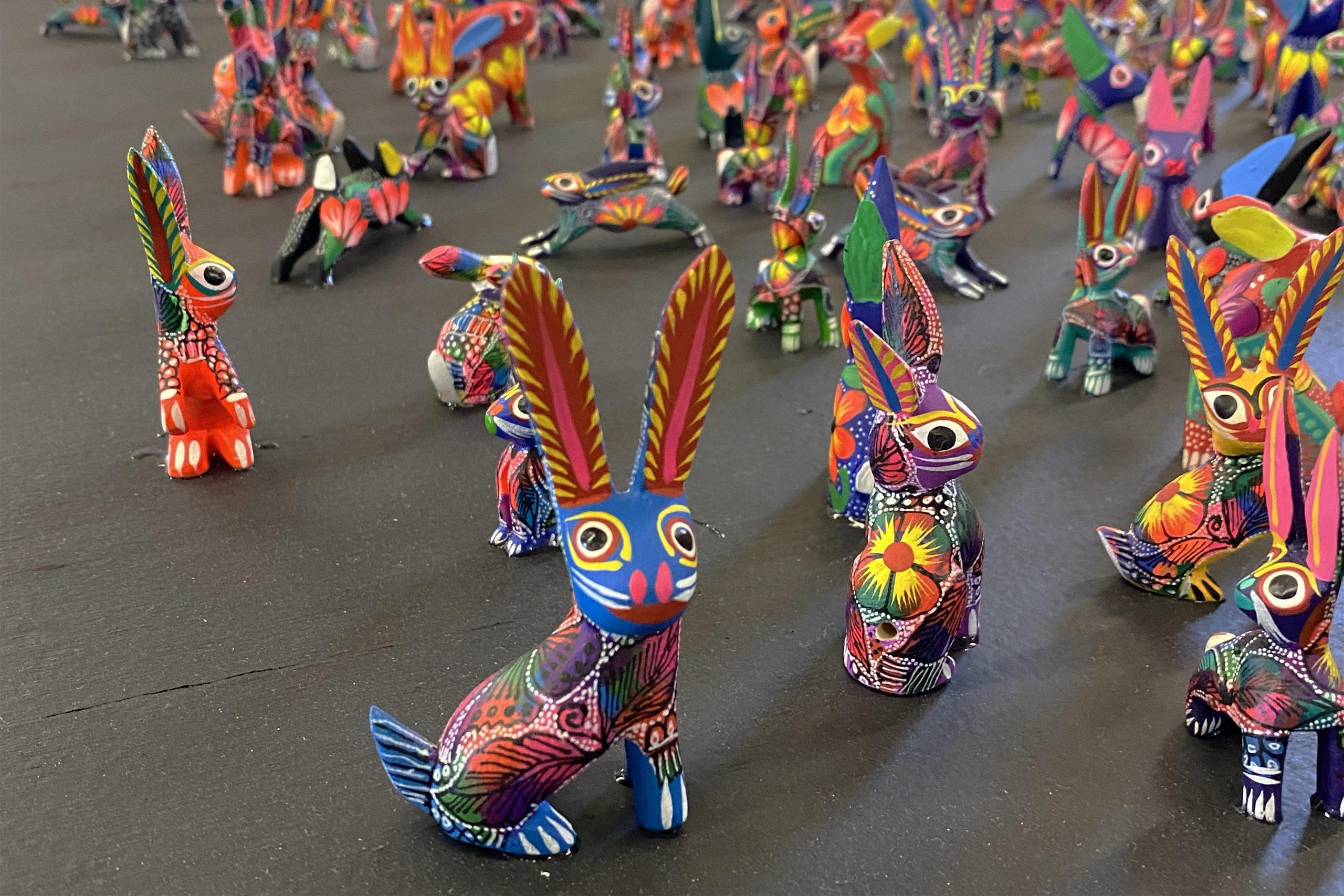 BARCOA commissioned an artist to create 400 rabbit figurines, representing the legend of Mayahuel giving birth to offspring who embody different states of intoxication – one of many authentic details sprinkled throughout the bar. (Photo by Taylor Costello)

BARCOA shares the building with Xico Inc., an indigenous and Latinx art gallery/studio, where a velvet vestibule separates it transforming into a shared 6,000-square-foot gallery and bar space for First Friday or private events.

A homemade quality prevails at the bar. All the fixtures, from the tile, Huichol skull art, Molcajete-style sinks, to the literal bar itself, were acquired direct from Mexico.

The business sits on a quiet corner a few minutes away from the zoom of local traffic of Roosevelt Row and Downtown Phoenix. The occasional hum of light rail cars and bells from the nearby Trinity Cathedral provide an appropriate relaxing ambiance under the front patio, where a pink concrete wall and a colorful front door from Guadalajara complete the vibe. In the coming months, two fire pits and a neon BARCOA sign will further light the way. 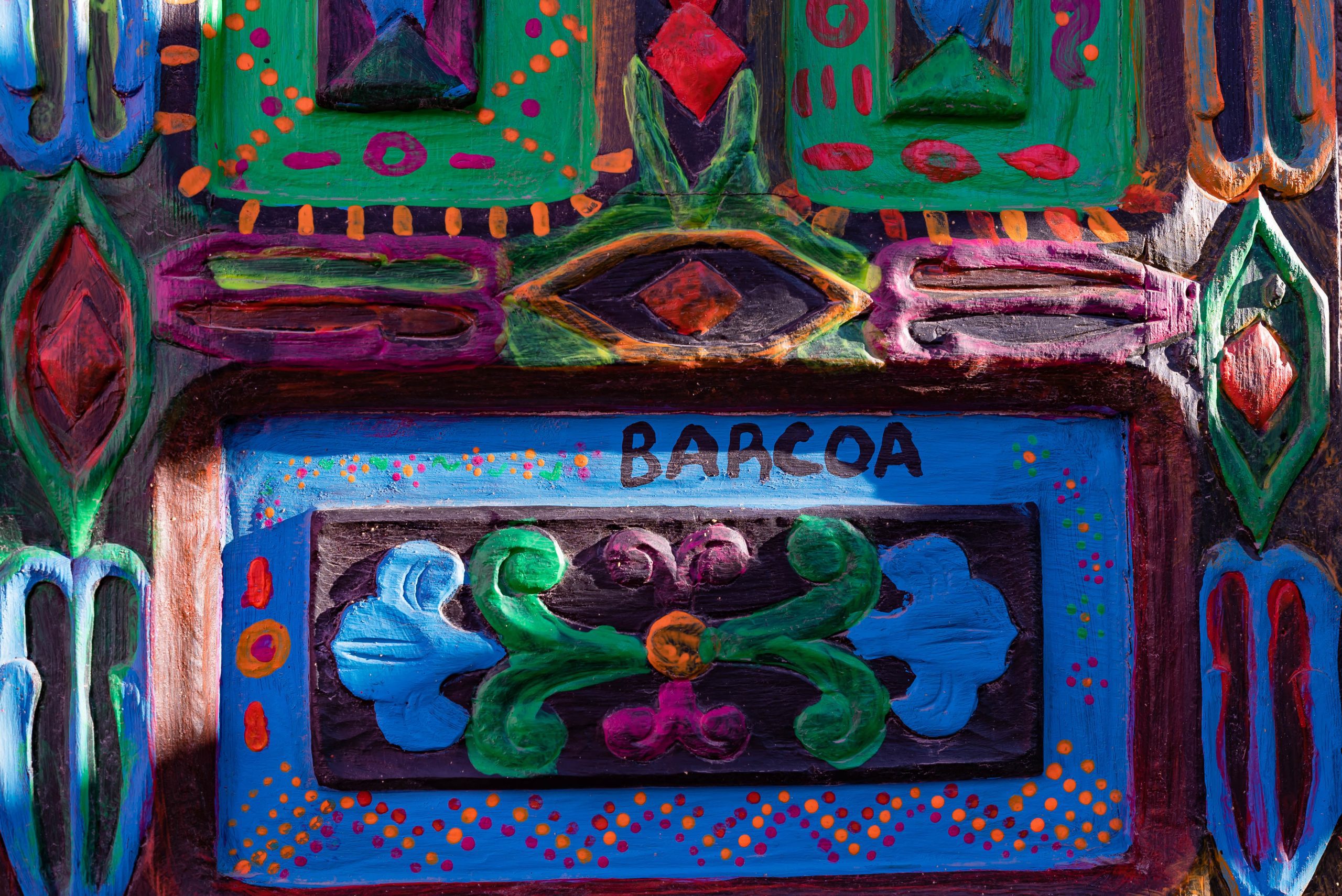 “This patio will be a nice relaxing patio where you can watch the city happen from a distance, and not in the wilderness,” Tyda said. “Truly our goal is to create a little slice of something that feels like a bar in Mexico in the middle of Downtown Phoenix.”