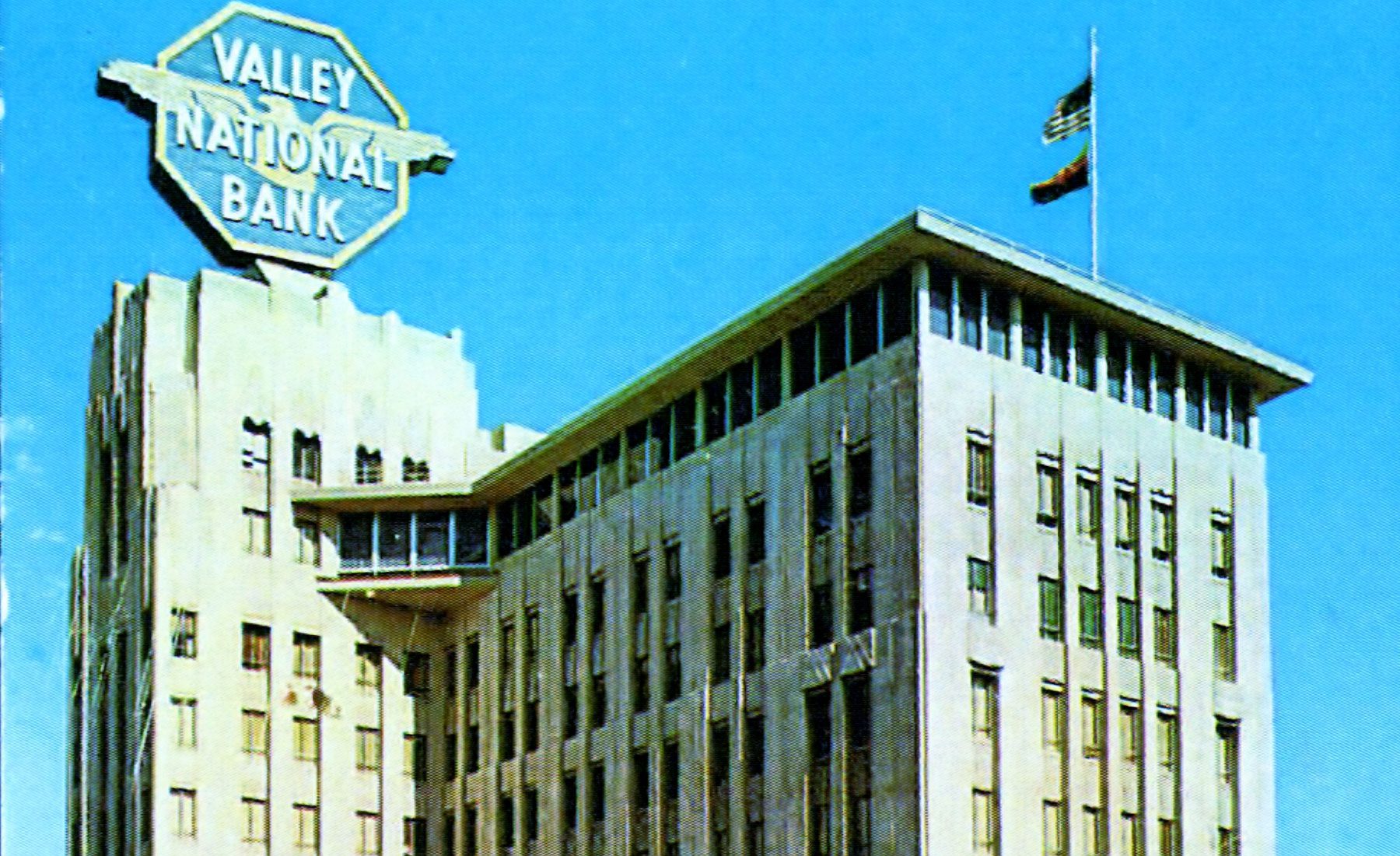 On April 29, 1958, those in Downtown Phoenix gazed upward in awe at the new advertisement towering over the city. Valley National Bank of Arizona unveiled its 35-foot octagon neon sign atop the Professional Building. The revolving, 26-ton sign located 221 feet above the sidewalk featured the financial institution’s blue and yellow eagle symbol, which was visible to airplanes 10 miles away.

Local radio and television stations broadcast the sign’s dedication. The event was featured on the cover of Signs of the Times. In its June 1958 issue, the national industry trade publication heralded it as the world’s largest revolving sign.
The colossal eagle, with its 49-foot wingspan, would only be perched above Downtown Phoenix a mere 14 years before flying off to oblivion. So how did this record-setting outdoor advertisement come about, and what caused its demise?

The sign’s story begins with Valley National Bank’s success after World War II. As Arizona grew, the bank expanded and had 51 branches in the state by the late 1950s. Each office branch displayed the company’s bird of prey, but none quite so dramatically as the central bank office in the Professional Building. 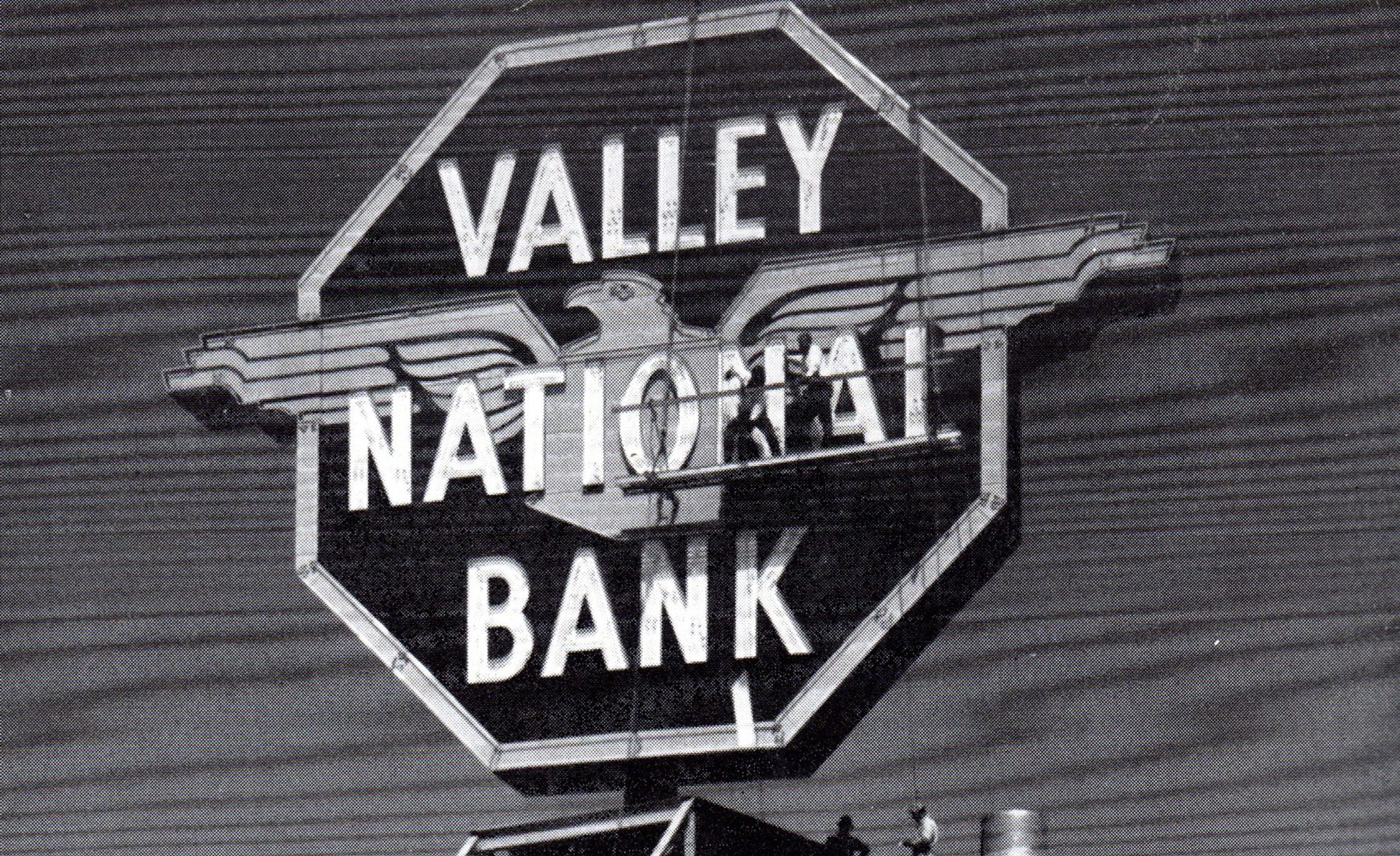 The 12-story Art Deco skyscraper, completed in 1931, was to be called the “Valley Bank Building.” However, because of numerous bank failures during the Great Depression, the name was changed to the Professional Building to focus attention on its medical tenants.

In recognition of their financial prosperity in 1958, the bank added a glass-enclosed executive penthouse to a wing of the Professional Building. And to leave no doubt as to the bank’s lofty presence in Phoenix, the company put a rotating sign on an adjacent roof of the building. 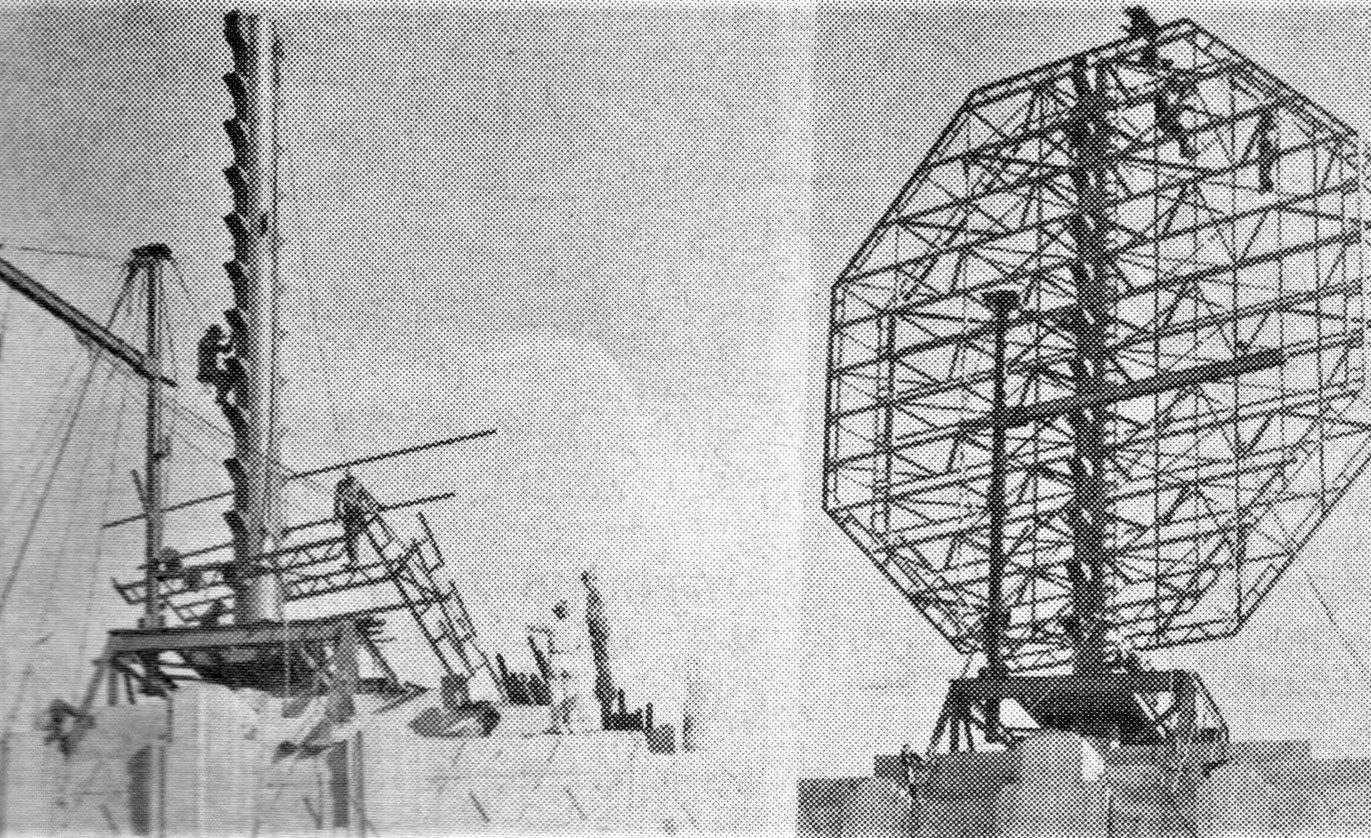 Sign construction atop the Professional Building, 1958. (Photo: “Signs of the Times”)

The bank selected Myers & Leiber Sign Company, then Arizona’s largest sign firm, to construct it. In the process, the bank’s logo was updated by famed sign designer Glen Guyette, who worked for the sign company. “I had to redraw it; the eagle looked more like a chicken,” he recalled in 2015.

The Allison Steel Manufacturing Company fabricated the sign’s steel frame in Phoenix. Three colors of translucent porcelain enamel panels with six-foot-tall letters composed the sign’s face, illuminated by white and gold neon tubing. “It was one of the few porcelain signs ever put up in Arizona,” Guyette said. 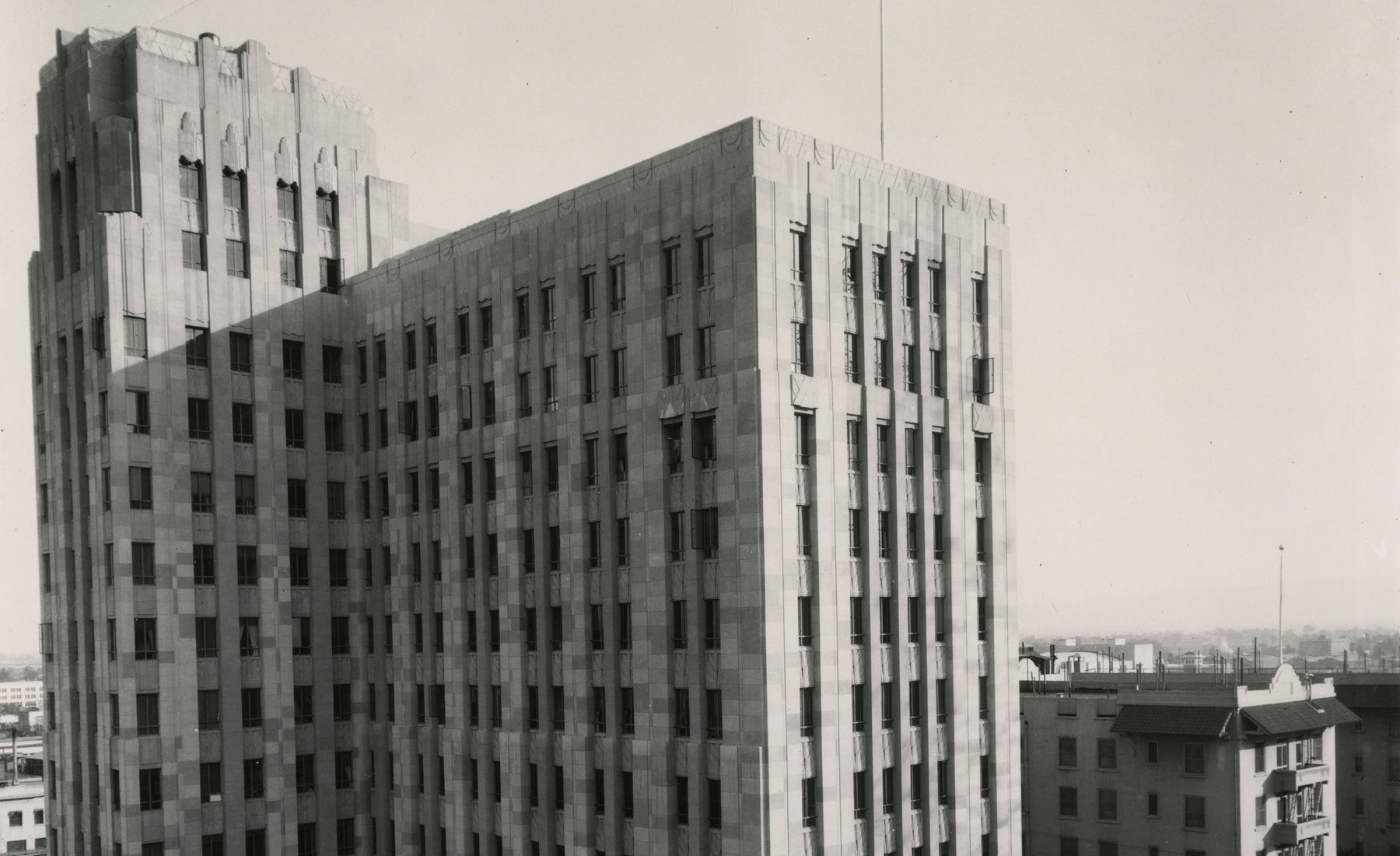 Constructing the 26-ton sign atop the 12-story building proved complicated. A 1 horsepower motor driving a 15 to 1 reduction gear turned the sign at 1.5 revolutions per minute. An anemometer controlled the system to prevent overloading during high winds. “When the wind blew, the three-story-high sign would turn into the wind, and the motor would stop,” Guyette said. “The wind pressure on it was fantastic.”

The Valley National Bank’s eagle rotated above the city until 1972. That year, the bank disassembled and removed it after moving its offices across the street into the newly constructed Valley Center. Later called Chase Tower, it remains the tallest building in Arizona. 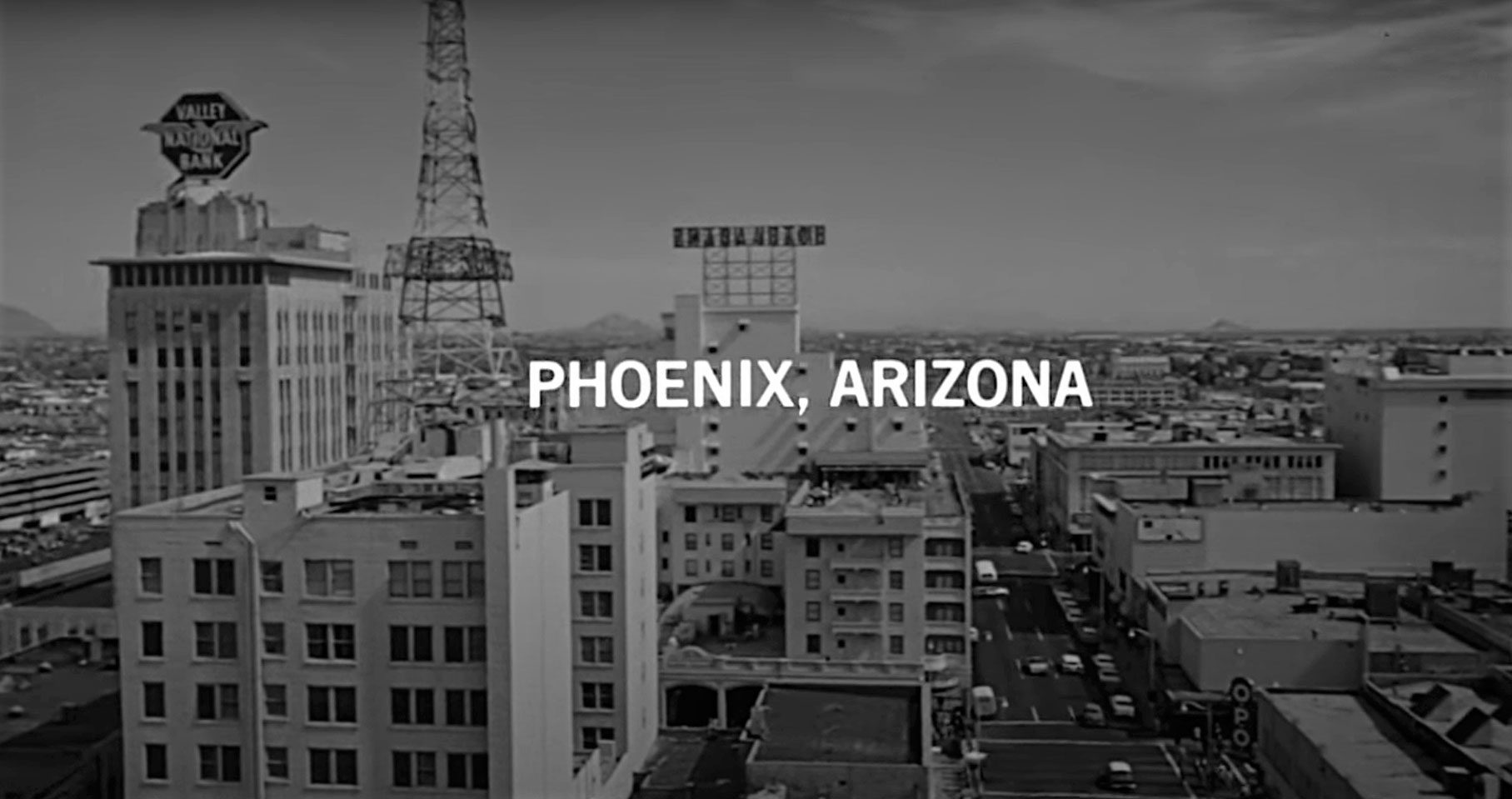 Phoenix lost one of its most recognizable landmarks, though cinephiles can still glimpse it rotating in the opening credits of Alfred Hitchcock’s 1960 film, Psycho.

About the author: According to Douglas Towne, a fun way to remember Valley National Bank’s spinning roof-top sign is when Phoenix celebrates “Psycho Day” on December 11. This unique local tradition honors the city’s connection to the Alfred Hitchcock movie, “Psycho,” which is usually shown at a venue in Downtown Phoenix. Towne is a freelance writer, hydrologist, historian and artist.