Tucked into their adjacent hotels, hotel restaurants and bars can often be overlooked and underestimated. While each of these restaurants and bars are located in a hotel in Downtown Phoenix, each and every one of them can be considered as a culinary and beverage destination, all on their own.

With all of them drawing upon Southwest influences and local flavors and ingredients, many are hidden gems on the verge of blossoming.

Here’s our roundup of Best Hotel Restaurants and Bars in Downtown Phoenix. 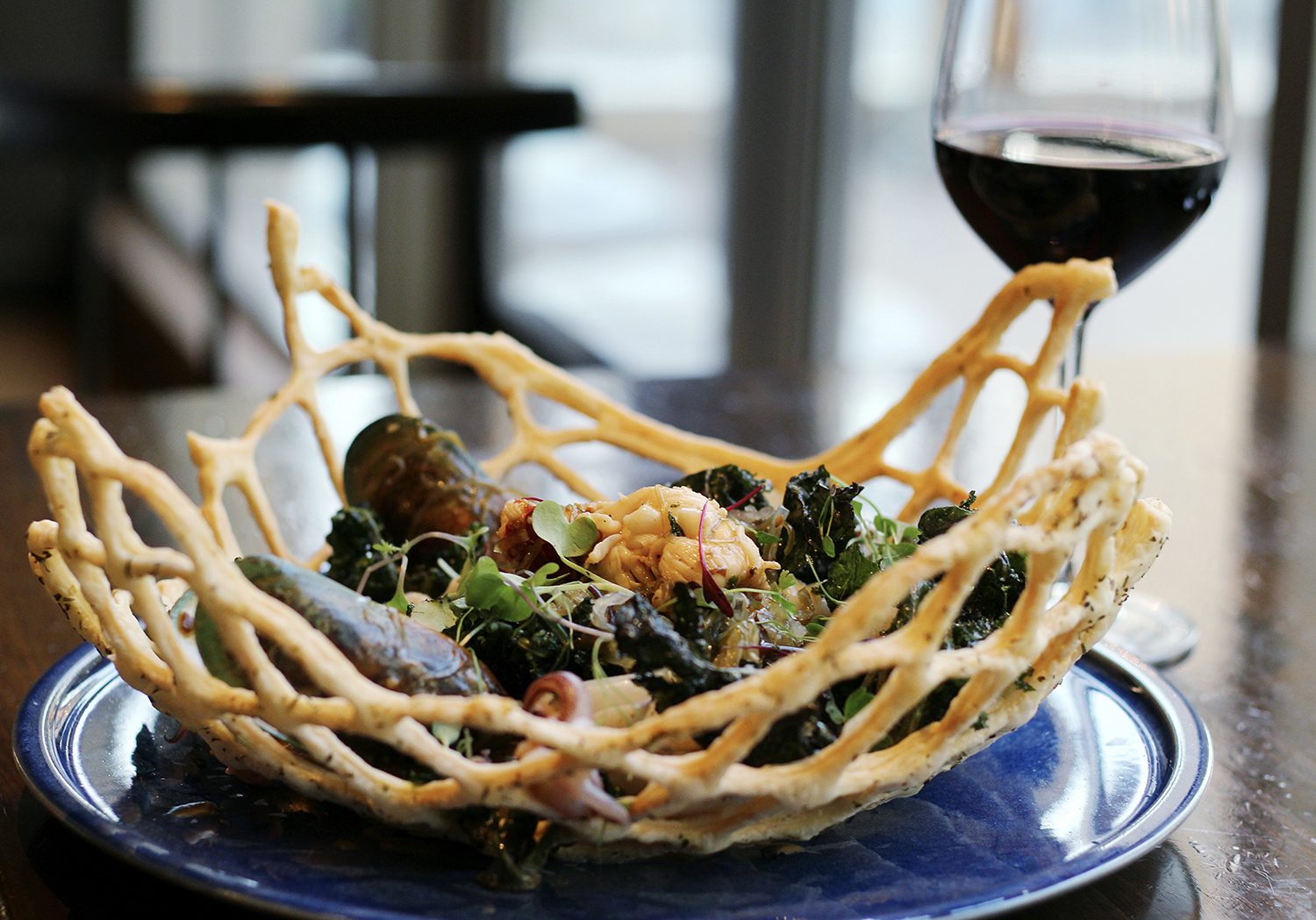 With a name like Blue Hound Kitchen & Cocktails, you can expect nothing less than innovation and eclecticism from the culinary and beverage team. Blue Hound’s eclectic fall menu will delight and surprise you, both in dishes and in cocktails.

The Net of the Sea is one of the most innovative dishes in the Downtown Phoenix food scene; it is a herb crushed puff pastry crafted into the shape of a net and holding a maritime mixture of Maine lobster, lump crap, jumbo prawns, green tip mussels, and calamari in a fresh, lemon-ginger vinaigrette.

When asking Executive Chef, Alexander Robinson, the inspiration for this dish, he said, “I love to play with food, and wanted to capture the essence of pulling a net out of the ocean. It’s a spin-off of paella, with the lollipop kale resembling coral reef, and the seaweed salad resembling kelp.”

This fun dish is certainly a show-stopper. At Blue Hound, quality is never compromised,  BHKC 900 Hot Stone allows you to sear your A5 wagyu to perfection, while the Roasted Sunchoke Bisque contains just the right amount of black truffle – a hard feat by any means.

For cocktails, Lead Bartender, Clint Spotleson, highlighted the playful portion of the menu, Rollin’ With the Homies.

“Try the Stealth Bomber,” said Spotleson, mentioning the bourbon-based cocktail, “It’s a vegan, clarified cocktail that takes 24-hours to make.” The Stealth Bomber is so smooth, it’s almost criminal. But if that’s not up your alley, try the Fir Babies cocktail, “Shaken with Delight”, to warm you up: it includes douglas fir liqueur, apple cider vinegar, and brown sugar syrup, and tastes like a sophisticated fall evening. 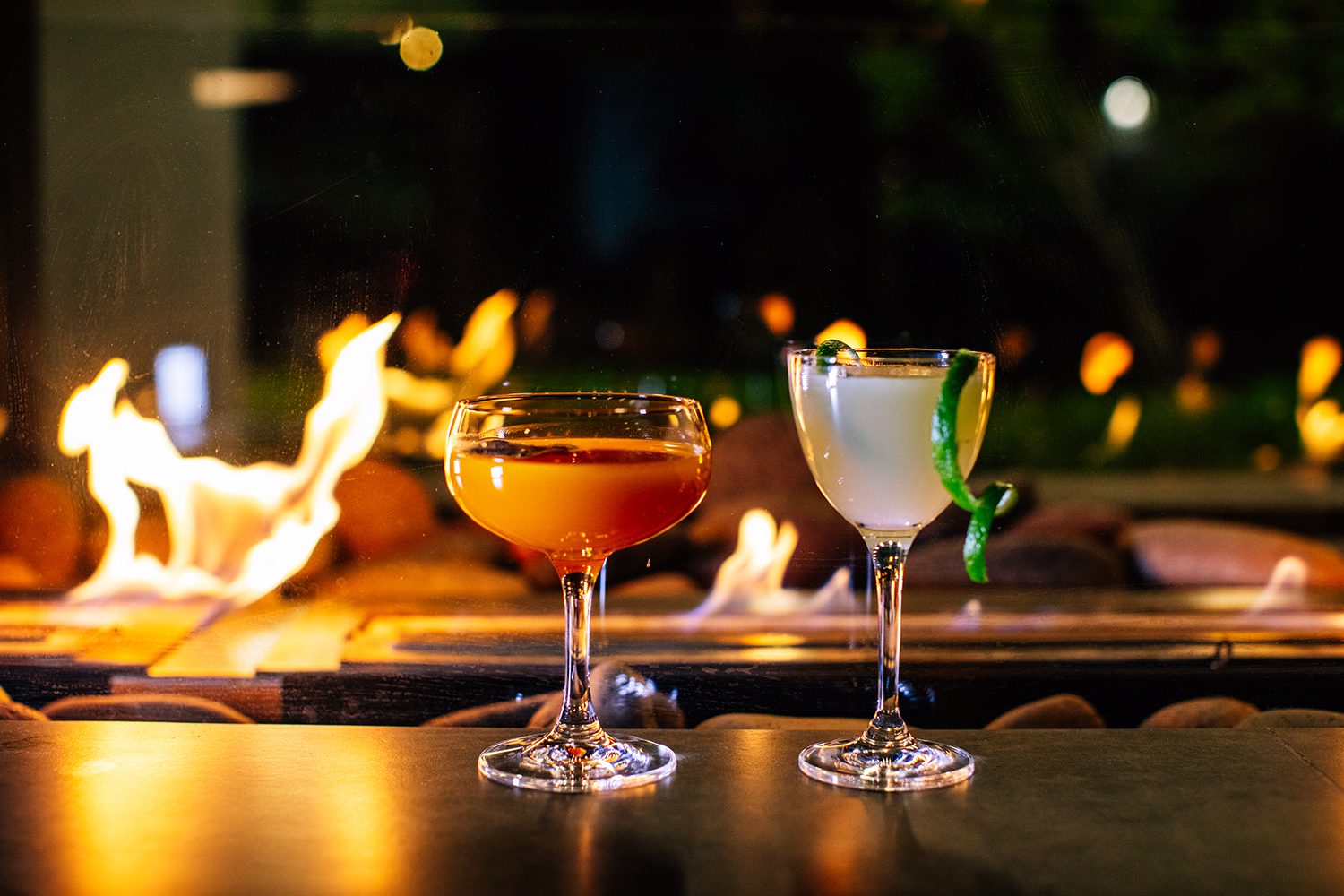 When asking John Marchetti, Executive Chef, what he wants to accomplish with the Dust Cutter menu, he responded with level gravity, “Warm, like an inviting fire, in the same way you would think of walking up to a campfire – being unique without being pretentious, being still, calm, and inviting. We want that: warmth in a lot of ways.”

Dust Cutter achieves just that – as a modern urban saloon, it emanates refined cowboy vibes, mixed with the wild and bold spirit of a flame, that can be tasted in each of its dishes.

The Cookies & Milkshake is like a deconstructed s’mores sandwich, with a dulce de leche milkshake, lit up toasted marshmallows, warm whiskey caramel shot and pistachio biscotti. The Duck Duck Goat Enchiladas warms the stomach, with tender duck confit bathed in chipotle cherry enchilada sauce, each bite melts in your mouth.

Storytelling and community is at the heart of Dust Cutter. You can grab a cocktail by the indoor-outdoor fireplace and hear legendary stories from long-time bartender, Rhonda, Benson whose 47 years of commitment to the Renaissance earned her, her very own cocktail: My Darling Rhonda – The Most Ladylike Cowboy in Town. The cocktail is a mix of citrus vodka, kiwi, lime and honey – a refreshing mix that pairs well with the warm, inviting dishes on the menu. 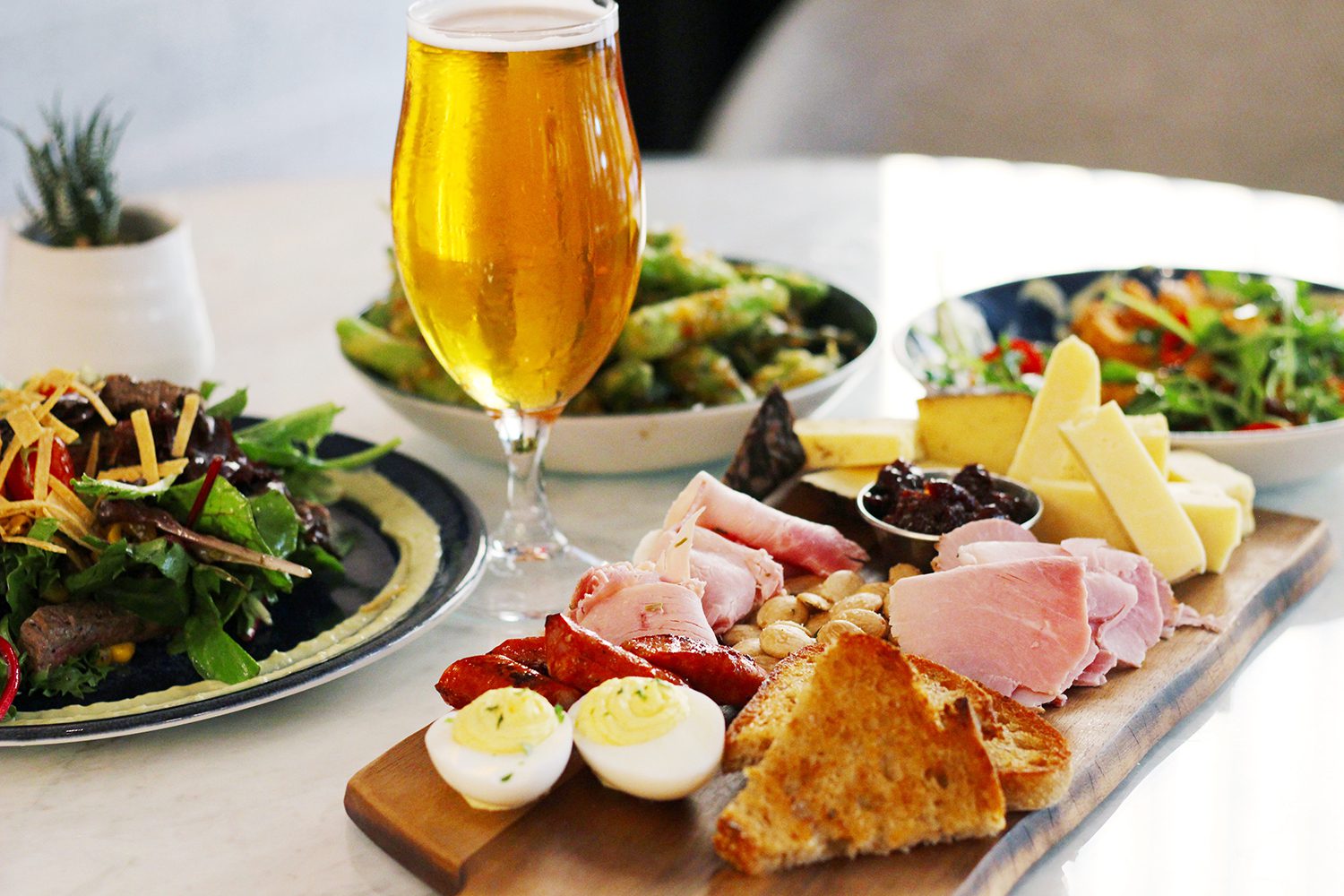 Located across the street from the Orpheum Theater, Adams Table is named after Adams St., similar to the Van Buren and The Roosevelt. The name is fitting, with its character as unassuming and unpretentious, but don’t underestimate Adams Table – the restaurant lets subtle, local ingredients pack a punch that surprises and enthralls.

“[Our food] is a little nod or a hint to a Southwest influence. When you’re just looking at the menu, you won’t really see it until you start looking at ingredients,” said David Belk, Area General Manager, “Then you’ll see a lot of Fresno chilies, shishito peppers, chorizo, and avocado.”

Star-studded appetizers and entrees elevate nostalgic dishes and provide that Southwest twist. The 24-hour Bacon, which is reminiscent of P&B jelly, is slow cooked, thick pork belly with almond butter and cherry jam, while the Adams Grilled Cheese includes hatch green chile cheddar, shishitos, and crispy bacon. Both dishes take childhood memories and evolve them for adult palettes, sending joy back to your taste buds. 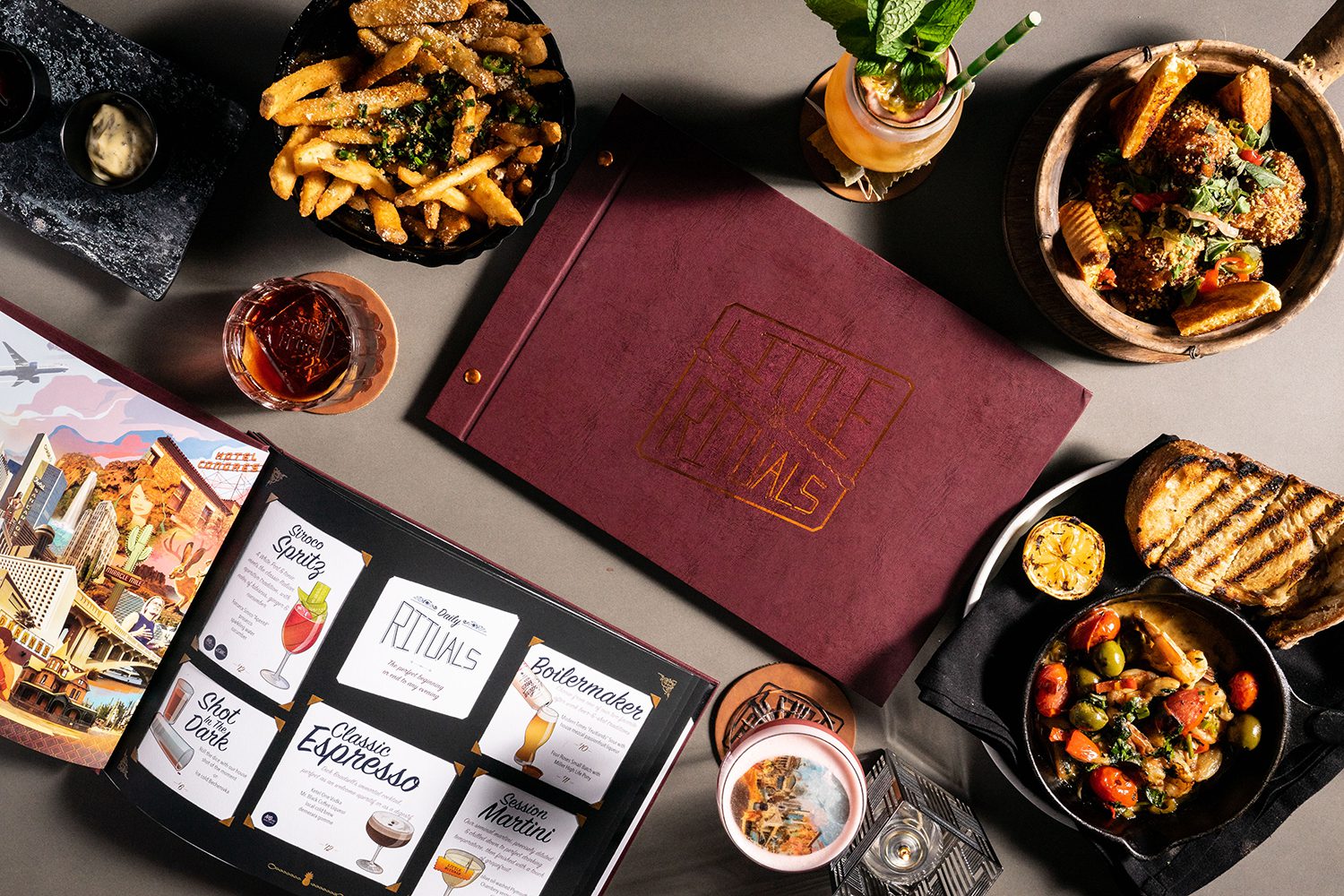 Ride the elevator to the fourth floor and go past two ominous looking doors to find the powerhouse, Little Rituals, an-award winning cocktail bar that boasts views of Footprint Stadium and Downtown Phoenix; it is usually a spot that you won’t find unless you’re looking for it, but that’s part of the appeal. This past year, Little Rituals was among the top four finalists for Best U.S. Hotel Bar for the 2022 Spirited Awards by Tales of the Cocktail Foundation, and with an unwavering cocktail philosophy, it’s no surprise to see why.

“Our basic philosophy is that we don’t replace a drink unless we have something better, or that serves a purpose to replace it,” said Co-Owner, Aaron DeFeo. “We’re globally-inspired, and research and seek out new flavors and flavor combinations, doing a deep dive on the ingredients themselves. We try to find unique ingredients and use them in ways that other people aren’t necessarily using. We draw inspiration from anywhere: from a song, from a dish that we’ve had at a restaurant, or sometimes we’ll take trips to one of the Asian markets in town and just walk the aisles.”

The results are cocktail concoctions like the Magic Stick, which includes a 1738 Cognac mixed with Pandan Blanc Vermouth, Hawaiian Rum, Green chartreuse, and Chinese Five Spice syrup. Dip an electriduct rock candy stick into the cocktail for a tingle on your tongue that’s electric. This is just one of the many impressive cocktails on the menu, and an example of the artistry of mixology at Little Rituals.

“Cocktail bars are becoming a dime a dozen. But good cocktail bars, the true fundamentals are much harder to find,” said Ross Simon, Proprietor & Principal of Little Rituals, “We create drinks that stand the test of time. And drinks that are balanced and consistent, and not just pretty for Instagram – pretty sick. I want them to be attractive, visually stimulating, tempting, and mouth-watering. But the proof is in the pudding, they gotta live up to the hype.”

Visitors can look forward to not only cocktails, but a new menu led by Executive Chef, Nathaniel Cayer-Myette, that will be available by the end of this year. 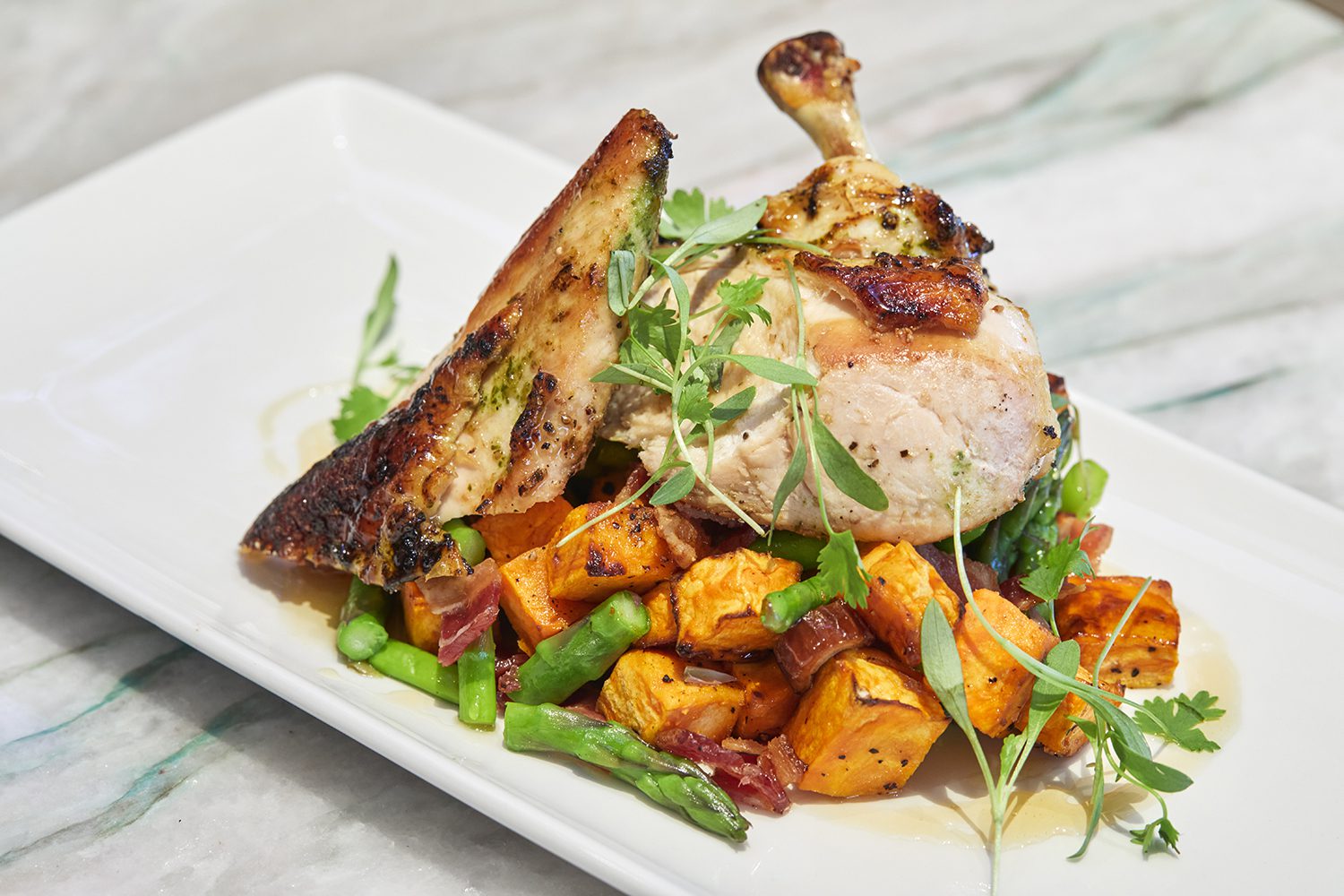 The newly opened, warm, colorful Carcara was inspired by the Five C’s of Arizona: cattle, copper, cotton, citrus and climate. You can see touches of each of the Five C’s in the design and decor, from the citrus trees to the copper light fixtures, and of course, the dishes.

Executive Chef John Alan de Souza admits he’s lived in a lot of cities, but he’s back in Phoenix because he’s “witnessing an emergence”. Carcara is part of the city’s evolution and its bright, inviting ambience makes it a hotspot for visitors and locals alike.

Executive Chef John Alan de Souza is serving “my little slice of Phoenix” on every dish on the menu. Grab a drink and light bites after work for their happy hour, 3-6 Tuesday – Saturday.

The Buffalo Cauliflower has a powerful crunch that even carnivores can respect and admire. The Loaded Guacamole combines cojita cheese, roasted pepitas, pickled onion, jicama, radish, for a dish that emanates Southwest flair, while the Ancho Chili Braised Beef Tacos contains tender smoked beef short rib, and an orange pico de gallo, a recipe that took refinement from the culinary team, but made with the team’s different backgrounds and influences, just right. Pair any of the dishes with a Devil’s Bridge cocktail, which is a fruity elixir that combines pink dragon fruit infused rum, that will leave you feeling cool on a warm evening. 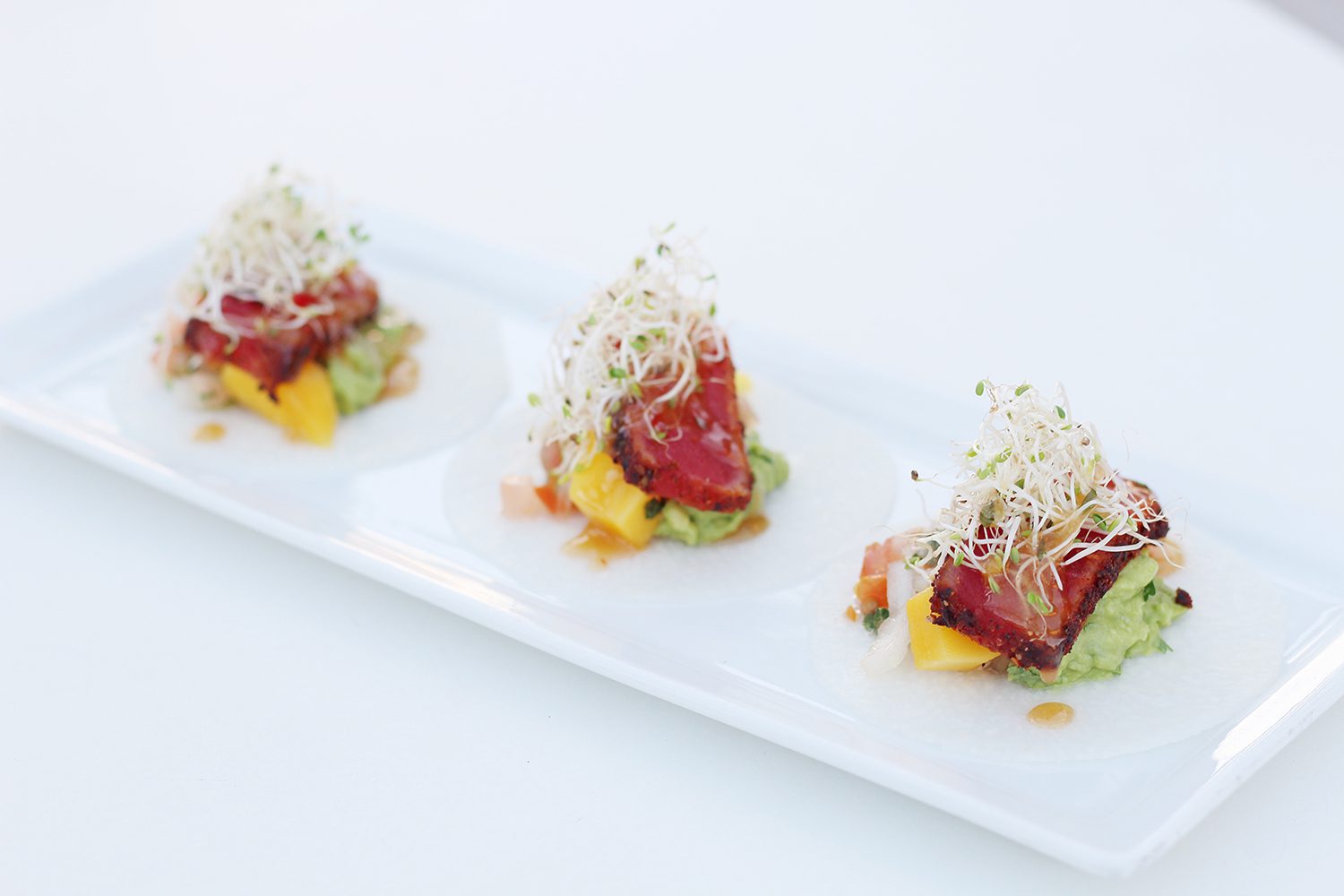 Floor 13 Rooftop Bar has stunning views of Downtown Phoenix, and is one of the best places to catch the sunset with your crew. The hotel was shot in the opening scene of Alfred Hitchcock’s movie, “Psycho”, and while most hotels don’t even include an option for the 13th floor, for fear of bad luck, Floor 13th Rooftop Bar bravely embraces its roots.

The cocktail menu features nine crafted cocktails named after Alfred Hitchcock and his movies, including fun drinks like “Master of Suspense”, “Guilty Witness”, and “Fatal Figures”. The Master of Suspense is a popular favorite, with tequila, mezcal, blueberry, basil, and lemon creating a sweet and strong mixture to sip on. The food menu includes light bites to enjoy as you take in the views, and displays the passion of the culinary team.

“I put my heart and soul into everything I make, even if it’s really simple. I try to make it the best possible,” said Ivan Perez, Food and Beverage Manager, “On the new fall menu, we have these awesome Ahi Tacos: they are on little jicama tortillas, topped with a mango guac, seared ahi, and drizzled with Asian soy vinaigrette.”

Not only are these Ahi Tacos visually stunning, they taste delicious. Grab a Bruschetta board to share with your group, because with three different types of bruschetta, you can’t go wrong.