Walking through the weathered shell of the First Baptist Church with a hard hat and necktie, Terry Goddard’s imagination runs wild. In this vast historic building on the corner of Monroe Street and Third Avenue, which dates back to 1929, he sees a future concert venue, art studios, maybe even a microbrewery or restaurant.
“What excites me is the fact that these walls could be productively engaged in community activities again,” said Terry Goddard, former mayor of Phoenix. “That we could have performances in this space, that it could be used for the community and for the arts – that has always been the dream.”
An avid preservationist and longtime politician, most recently serving as Attorney General of Arizona from 2003 to 2011, Goddard founded the nonprofit Housing Opportunities Center, which purchased the church and saved it from demolition in 1992.
It took 22 years to raise the funds necessary to restore the First Baptist Church, now referred to as the Monroe Abbey. Gutted by a massive 1984 fire that took the roof but left the walls mostly intact, heavy duty structural reinforcements will help tack this Gothic monument back together, and get it ready for tenancy. 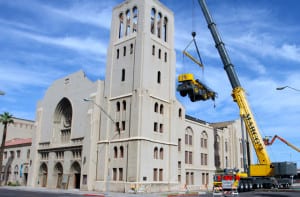 The stabilization process got underway in October 2014, and on Saturday, April 11, a 94,000-pound crane was hoisted by a larger crane into the middle of the church to help finish the job – making for a pretty nerve-wracking but exciting spectacle, according to Dan Patry of Patry Building Company.
“You would never plan such a building from scratch because it wouldn’t make sense,” he said. “You just find some ways to adapt it and it creates some great opportunities.”
More and more adaptive reuse projects like this one are popping up around Downtown Phoenix and the Warehouse District. But this project is particularly special, according to Dan Klocke, vice president of development at Downtown Phoenix Inc.
“There’s no other building like it in the Valley,” Klocke said. “Because of its scale and its uniqueness, it could potentially attract a lot of visitors to downtown.”
A tenant already occupies the hallowed halls of a smaller adjacent church dubbed Grace Chapel, which is connected to Monroe Abbey but wasn’t structurally damaged in the fire. 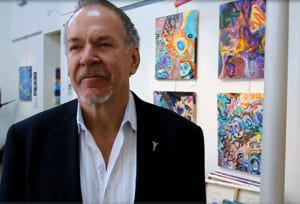 Robert Miley, known for his melted weapons sculpture at the Roosevelt Street light rail station, moved in five years ago. He uses it as an office and gallery space for Release the Fear, a nonprofit for at-risk youth.
Miley encountered his own set of obstacles moving in. Kicking out pigeons, updating electrical, putting in air conditioning and cleaning out decades of decay — just some of the basics associated with moving into a long-vacant building 85 years young.
“This really is a metaphor for what can be achieved with anything,” he said.
He loves the energy of the abbey and said he hopes to continue renting office or studio space at Grace Chapel or somewhere within the finished building.
Over the years, convincing people to love this place was never really the issue — it was securing the funds.
Getting to this point proved to be a long, very expensive and arduous road for the Housing Opportunities Center — and the stabilization work is just the beginning.
But for those closest to the project, it represents so much more than just saving an old church.
“There’s a tremendous amount of flavor and placemaking and just a sense of who we are, where we’ve come from that is embodied in these buildings,” Goddard said. “I think it’s tragic when they’re lost and I think whenever we can hold onto one of the monuments of the past – that’s something we should do.”