A 'Dramatic Transformation' In Store For the Historic Welnick Bros. Marketplace 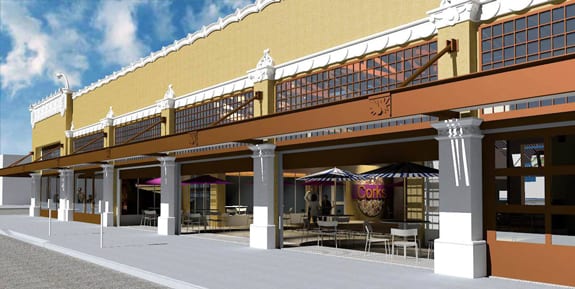 Over the next few months, the exterior of the historic Welnick Bros. Market and adjacent Liefgreen Seed Company buildings, both built in 1927, will get a major facelift.
Walls will be removed to expose roll-up, garage-style doorways, the boarded up windows and skylights will once again see the light of day, and the beautiful plaster moldings repaired to their original glory.
“Every one of these historic preservation projects is like a mini mystery puzzle,” said Robert Graham, principal architect at Motley Design Group. “You have to look at the building and historical records and figure out what’s missing and how to put it back together.”
The Welnick was converted into a print shop in 1967 and sat vacant for the past decade, which is why the owners decided to contract historic restoration specialists, Motley Design Group, to peel back the layers of time and bring back much of the original design work.
Phase one of the Welnick Arcade Marketplace — as it’s now dubbed — wrapped up in June, which included interior demolition and abatement of hazardous materials.
That means contractors are now bidding on the exterior work and the owners are seeking potential tenants. Once tenants are secured, the interior will be retrofitted for individual businesses.
When James Kuykendall and Pat Cantelme bought the buildings located at 345 W. Van Buren Street in December 2014, they knew restoration would not be a quick, easy or inexpensive feat.
“There are a lot of issues that have to be addressed on an older building like this but we’re excited,” said James Kuykendall, co-owner of the Welnick Arcade Marketplace. “As a Phoenix native, I’ve always been interested in downtown restoration but this is my first time getting involved.”
Just like Leo and Ed Welnick, who sold fresh fish, meats and produce in the premiere multi-vendor market of the 1920s, Kuykendall and Cantelme want to bring the downtown community together with a mixture of great restaurants and retail. The vision includes lots of patio space, natural light and a mezzanine.

With approximately 14,000 square feet to play with, Pat Cantelme says he would love to see an upscale restaurant, businesses that cater to the daytime commuter crowd and possibly a space for entertainment or live music.
“West Van Buren is one of the few areas in Downtown Phoenix that hasn’t been developed and hasn’t taken off,” he said. “We think this will be the centerpiece for that redevelopment.”
The timing couldn’t be better. With 1,140 residential units currently under construction in greater downtown, it’s clear more and more people want to live, work and play in the Urban Core.
It’s pretty business-friendly too. The city recently approved the development of an Entertainment District in June, which both Kuykendall and Cantelme supported. Now future tenants will have the opportunity to serve alcohol if they choose.
Previously, potential bars, microbreweries and nightclubs were prohibited from applying for a liquor license if they were within 300 feet of a church. The Welnick is directly affected, since it’s located across the street from one.
“So between where we are now, the new residences that are going in and the Entertainment District, we’re right in the heart of it,” Cantelme said. “We’re pretty excited about our opportunities here.”
Part of the draw of Downtown Phoenix — for both businesses and residents — is the thoughtful and adaptive reuse of old buildings. The Welnick owners are currently in the process of securing historic preservation designation and applying for federal tax credits to make that happen.
According to Sherry Rampy, a realtor and historic preservation consultant for the project, there was a demolition permit on the properties in 2010 and the buildings were nearly lost.
“Now we have people who are not trying to eke out every penny of profit but actually restore it into something even more beautiful than when it was built,” she said. “I love this project.”
According to Graham, who recently worked on the DeSoto Central Market restoration on Roosevelt Row, the team lucked out by discovering the original construction drawings. It was designed by Fitzhugh & Byron, who also worked on historic gems like the First Baptist Church, which is currently under renovation, and the Roosevelt Community Church.
“They’re these little diamonds in the rough here and there in downtown that no one gives a second look to because they’ve been so mistreated,” he said. “It’s going to be a really dramatic transformation.”
Cantelme says they’re “committed to West Van Buren” and are already looking at developing other properties in the area.
The Welnick Arcade Marketplace is slated to open August 2016 and according to the owners, a number of local tenants have already expressed interest.